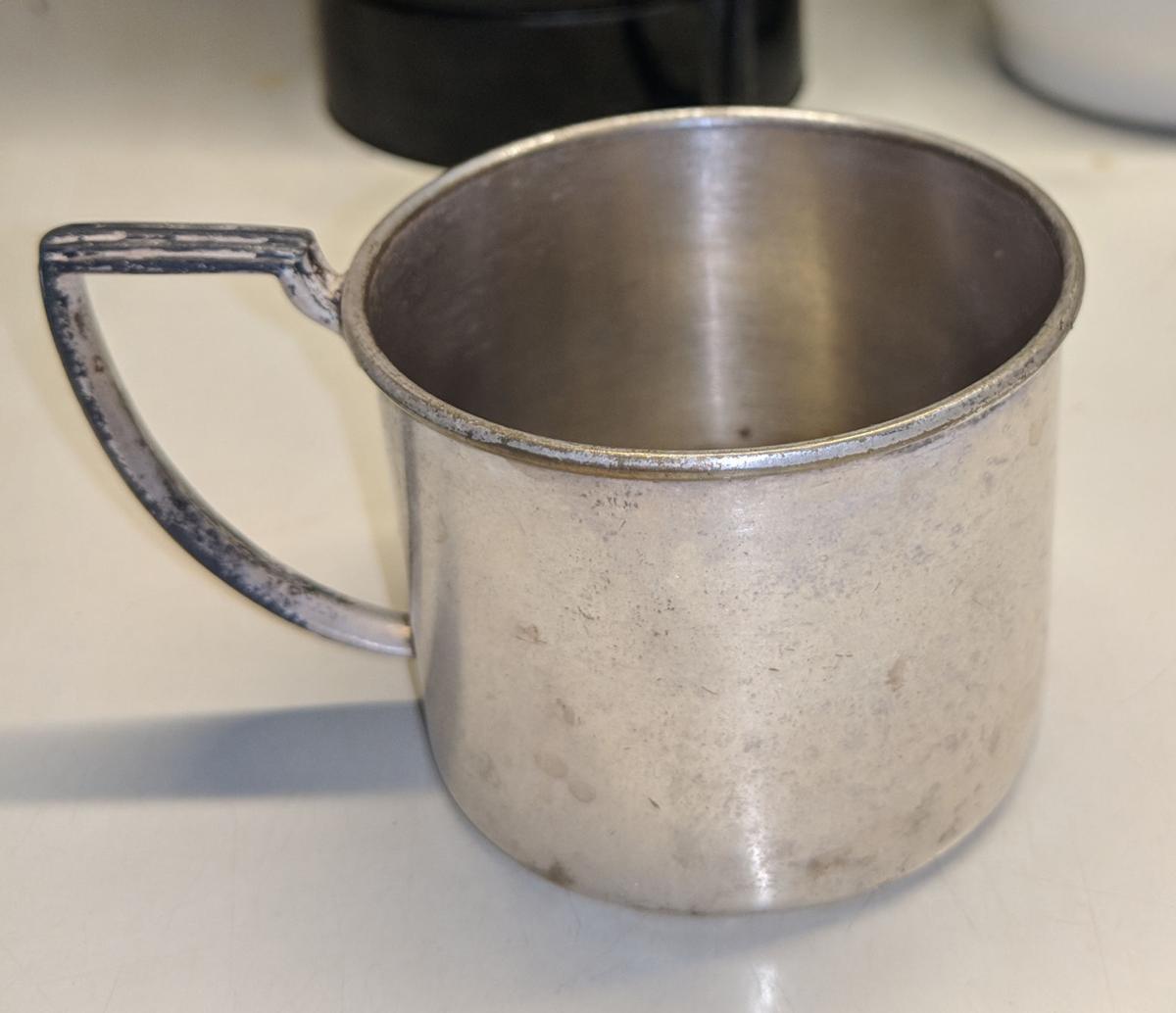 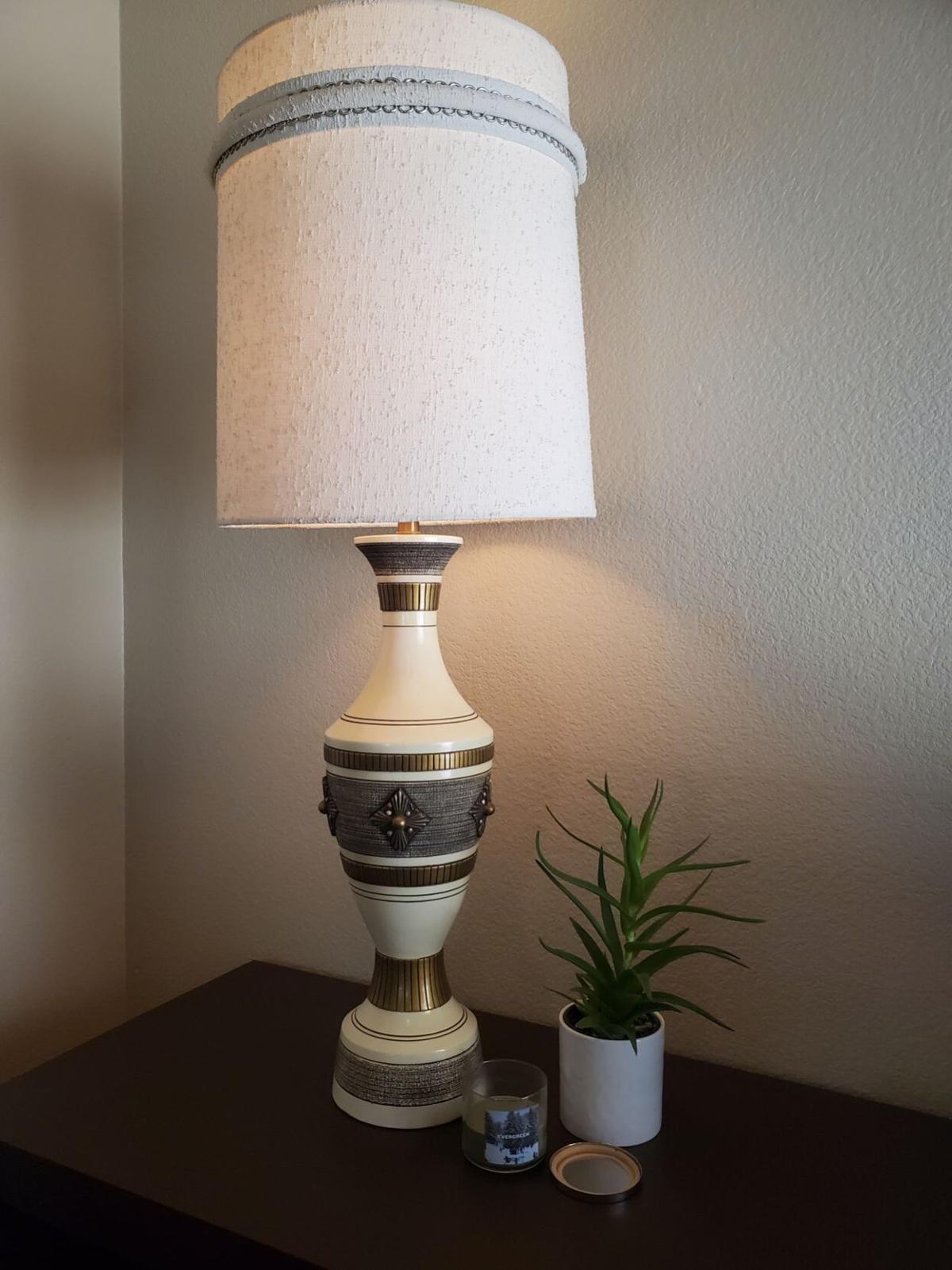 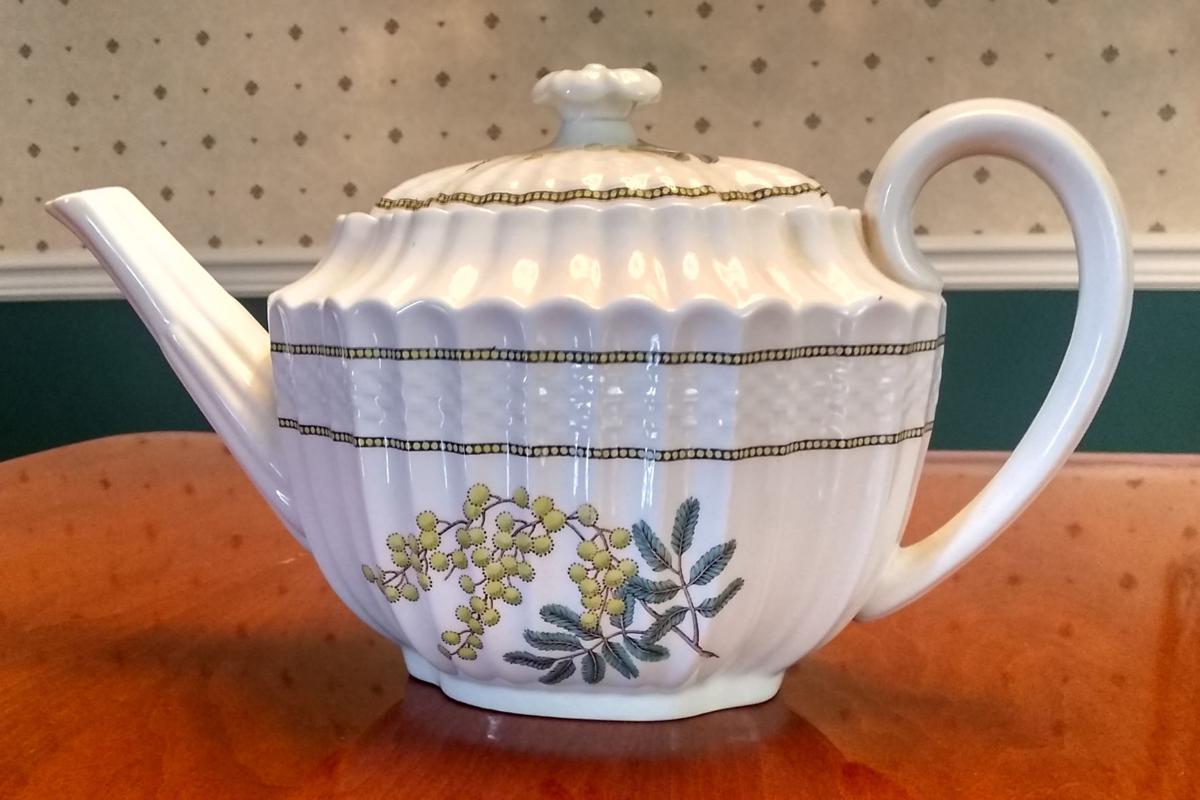 QUESTION: I have a small baby cup. The mark on the bottom is a semi-circle arch resting on a bar. “WILCOX S. P. CO” is inside the semi-circle arch. “INTERNATIONAL S. CO.” is inside the bottom bar. In the center are four squares with the initials “E,” P,” “N,” and “S.” Beneath this mark is a raised letter mark for “W. M. MOUNT” beneath which is an impressed “76.” The body of the cup is plain. The handle is a reverse “D” shaped. The cup is 2 3/4” high and about the same width. It is heavily used. What can you tell me about the cup? – JK, Preston, MD, Email Question.

International Silver continued to use the Wilcox Silver Plate Company brand. In 1921, International introduced the half circle trademark. It was registered in 1923. The Meriden plant was closed in 1941 because of the metal shortage created by wartime needs. When the war ended, International transferred production of Wilcox pieces to its other factories. The Meriden plant never reopened. In 1961, Wilcox Silver Plate became Webster-Wilcox.

The initials EPNS are short for electroplated nickel silver. This means the base metal of your baby cup is a non-precious metal. Base metals ranged from Britannia, a combination of tin (93 percent), antimony (5 percent), and copper (2 percent), to primarily copper. As a result, your cup has no melt value in terms of precious metal.

The cup was silver plated, meaning a miniscule plating of silver covers the base metal. The quality of the plating varied. Double plating meant two coats, triple plate three, and quadruple plate four. It is most likely your baby cup had one coating, at best two.

The problem with plating is that when the cup is cleaned with a silver polish, the polish removes a thin layer of silver each time polishing occurs. Zealous cleaning often removes all the silver plating. Based on the pictures that accompanied your email, it appears that the plating has been worn off your baby cup.

The number “76” is a stock number. Order a dozen “76” baby cups and receive a dozen identical to the cup you own. The “W. M. Mount” mark began as a mystery. Wilcox most certainly did not offer to cast the name of the baby in the bottom of a cup. This was not cost effective. A quick internet search revealed many silver-plated pieces with a W. M. Mount mark. I suspect W. M. Mount was a wholesaler who contracted with International / Wilcox Silver Plate to produce pieces to be sold exclusively by him.

What does all the above mean in terms of secondary market value? Your baby cup has little to no value. Silver plated coffee and tea pots, cups, and vases are referred to as “dried flower holders” by most individuals in the trade. Do not consider re-plating the baby cup unless it has a strong family connection. The cost will far exceed the secondary market value of the re-plated cup.

You have a conversation piece. Given the information I have provided, you now can talk about your baby cup, should anyone ask, like an expert.

QUESTION: I recently acquired a 1950s table lamp. “Regent / © Reglor” is impressed into the base near the exit hole for the cord. The urn standard is a white ground with a dark tapestry-like band around its center. The bottom of the stepped base repeats the motif. The lamp is 50 inches high and retains its period lamp shade. I think the lamp is stunning. Any input would be appreciated. – L, Email Question

ANSWER: You own a very chic 1950s semi-Modernist lamp. The only problem is that it was most likely one of a pair. End tables located at each end of a couch or sofa were extremely common in the 1950s. When they were present, there always was a pair of matching lamps atop them.

Bernie and Rena Stein established Reglor of California in 1947. The name is a combination of Rena and Gloria, her cousin. The Reglor factory was located in Montebello, California. Oscar Vega, a production assistant, designed most of the lamps. Reglor’s distinctive shades were made in house.

The most common and most eagerly sought Reglor lamps are those featuring a male and female pair. Admittedly, the mere presence of the Reglor name adds a perceived value to the lamps from a designer’s or modernist collector’s perspective.

An internet search did not result in my finding any comparable Reglor lamps, albeit I did find over a dozen listings for Reglor figural standard lamps. As one of a broken pair but still having an element of modernist pizzazz, a fair secondary market value for you lamp is between $50.00 and $65.00.

QUESTION: I have a ribbed body, Federal-style ceramic teapot made by Copeland Spode, England. The white ground has a flower design on the body. It is 100 years old and does it have any value? – SD, Lansdale, PA, Email Question

ANSWER: Copeland and Spode introduced the mark on your teapot in 1891 and used it for several decades into the 20th century. Judging from the decorative motif, I date the teapot in the 1920s or 1930s. If it was made in the early 1920s, then it is 100 years old or approaching this age.

If age equated to value in the antiques and collectibles field, we would all be rich. The marketplace determines value, not age. The market for utilitarian household teapots, even when made by a high-end ceramic manufacturer, is weak. The Golden Age of teapot collecting occurred in the middle of the 20th century.

As a result, your Copeland Spode teapot has a secondary market value between $20.00 and $30.00 and is a tough sell at these prices. My advice is to heat up some water, brew a pot of loose-leaf tea, and enjoy. By the way, do not forget to heat up the pot first before inserting the tea and brewing water.

QUESTION: I have two different brands of 18/8 stainless steel flatware, each set consisting of 14 5-piece plate settings. The first pattern is Gorham’s Golden Ribbon Edge, the second Reed and Barton’s French Countryside. Both sets were purchased in 1998 via my bridal registry at Macy’s and Bullocks Department Stores. I want to acquire some additional pieces. Most of my pieces are stamped 18/8 Japan and a few 18/8 Korea. Should I expect to pay more for one marking over the other? Also, I note that modern examples of these two patterns are marked 18/10 China and Vietnam. Is 18/10 more valuable than 18/8? I will appreciate any advice you can provide. – DH, Trabuco Canyon, CA

ANSWER: 18/8 stainless steel is composed of 18 percent chromium and 8 percent nickel. A 304 grade stainless contains no more than 0.8 percent carbon and at least 50 percent iron. 18/8 and 18/10 are the most common grades of stainless steel used for food preparation and dining. The important consideration is that stainless steel does not contain precious metals. Stainless steel has no secondary market melt value.

There is no secondary market value difference in respect to where the stainless pattern flatware is made. Most guests are not going to pick up the flatware and look to see who made it and what composition it is. I am an exception, so you are safe as long as you do not invite me to dinner.

My recommendation is set a price above which you will not pay when consider whether to purchase a five-piece set. I checked Worthpoint.com’s Worthopedia. A good price appears to be between $30.00 and $35.00 per set. If you are patient and willing to track Craigslist and local garage and estate sales, you most certainly can do better, much better.

You must have a large dining room table if a service for 14 is not sufficient.