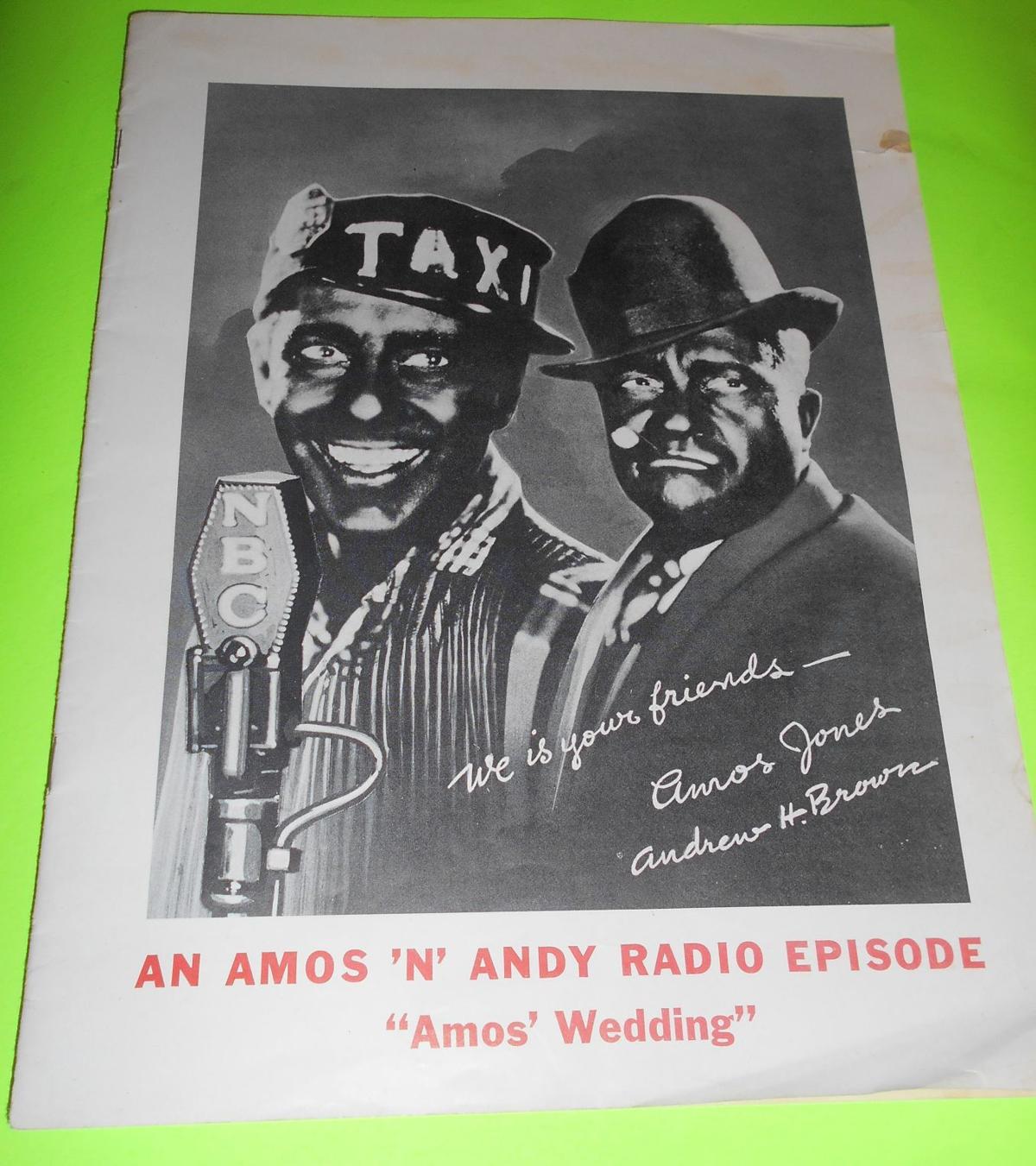 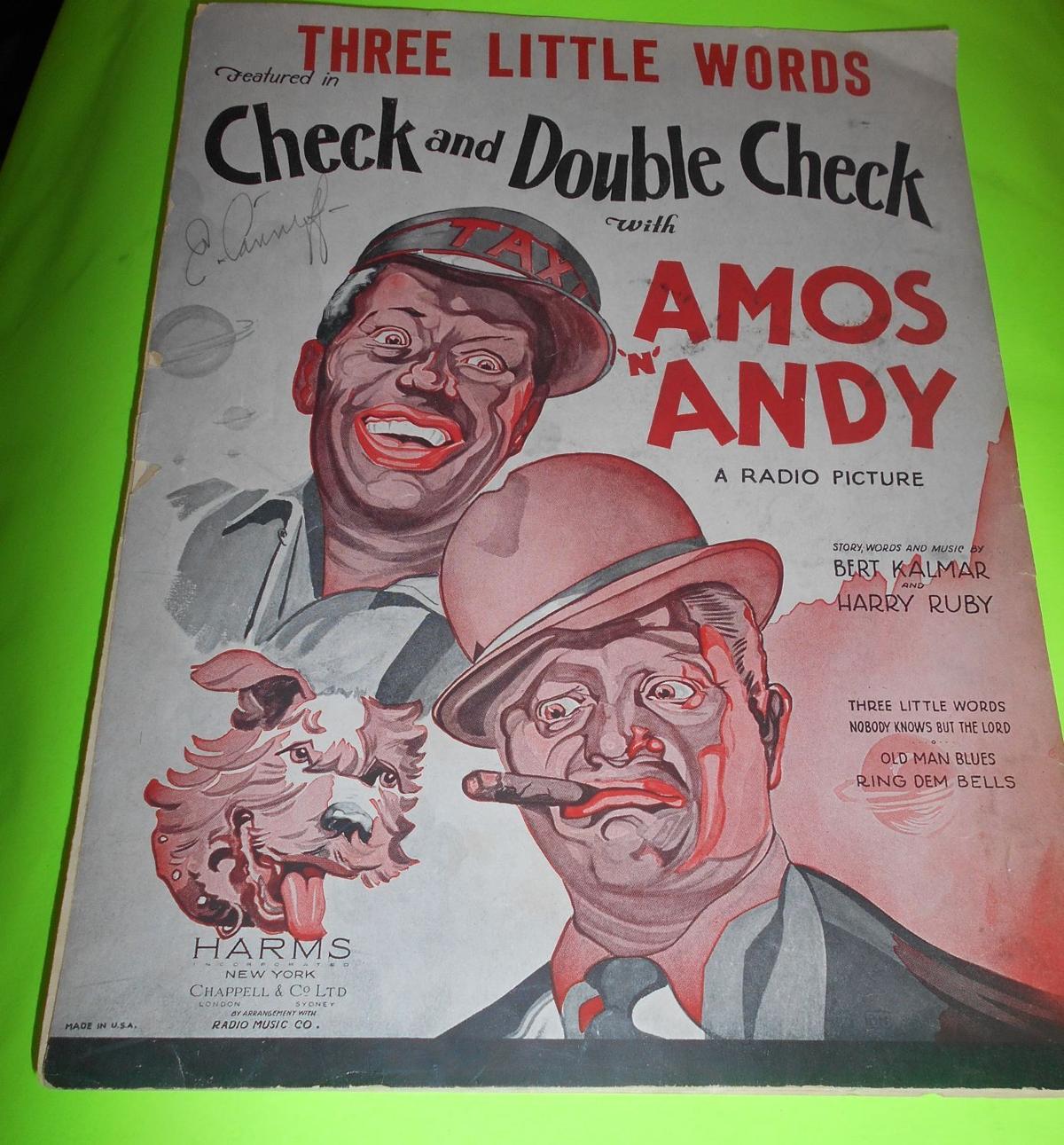 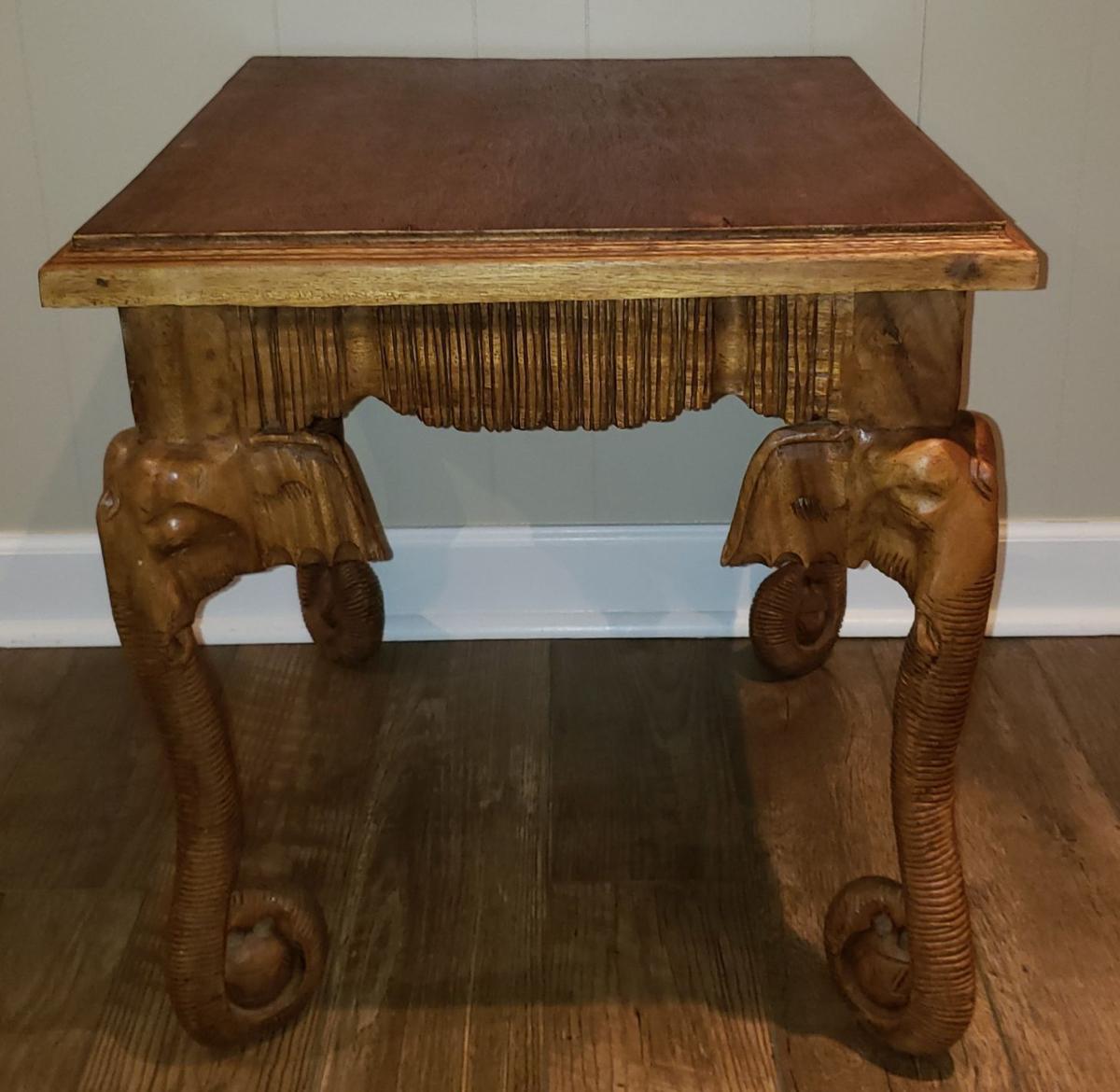 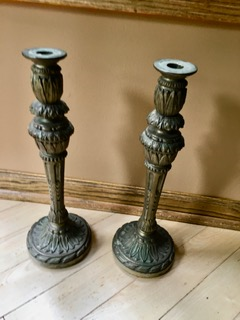 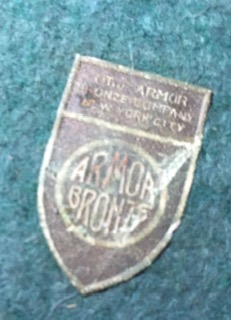 I purchased a flat containing paper ephemera at an auction in Illinois. Two Amos ‘n Andy radio items were among the papers in the flat. The first is a printed copy of a 1935 Amos ‘n Andy radio episode entitled “Amos’ Wedding.” The cover features a signed picture of Amos ‘n Andy. Inside is a printed letter that begins “YOUR OWN / AUTOGRAPHED COPY.” I feel certain the signatures are printed as part of the picture. The period envelope also was present. The second is a five-page Amos ‘n Andy song book (sheet music) featuring music from “Three Little Words: Check and Double Check,” an Amos ‘n Andy movie released by RKO Radio Pictures. There is a hand-written signature, albeit not the name of either individual who portrayed Amos ‘n Andy, in the upper left quadrant. Any information on these two items would be much appreciated. – FJS, Ballinger, TX, Email Question

Freeman Gosden and Charles Cornell, two white actors, wrote and voiced the Amos ‘n Andy radio show. The show concept initially aired on WGN as “Sam ‘n Harry” beginning on January 12, 1926. When WGN refused to distribute the show nationally on records, Gosden and Cornell did a last broadcast on January 29, 1928.

WMAQ, the “Chicago Dailey News” station talked with Gosden and Cornell about creating a new show similar to Sam ‘n Harry. Amos ‘n Andy aired from March 19, 1928 to November 25, 1960. Gosden voiced Amos Jones and Cornell that of Andrew Hogg Brown. Together, they created and voiced over 170 male characters. Amos ‘n Andy was a nightly radio series from 1928 to 1943, a weekly situation comedy from 1943-1955, and a nightly disc-jockey program from 1954-1960. Gosden and Cornell recorded the show on 78rpm discs. By 1929, over 70 United States radio stations carried the show. Early 1930s programs originated from the El Mirador Hotel in Palm Springs, California.

The Amos ‘n Andy show generated a number of premiums. The printed booklet entitled “An Amos ’n Andy Radio Episode: ‘Amos’ Wedding’” that contained information about Amos ‘n Andy, the script of episode No. 2225 that aired on December 25, 1935, a portion of the script that was not aired, and a cover with a picture of Amos and Andy with a printed facsimile signature was a Pepsodent toothpaste premium. The attribution is beneath the return address on the enveloped.

The Pepsodent premium is common. Examples appear regularly for sale on eBay. Recent sell through prices as listed on WorthPoint.com range from $12.00 to $15.00. Occasionally, an example will sell for double these prices, obviously to a buyer who has no patience or desire to comparison shop.

I just discovered your “Collector Inspector” television show on HGTV and have been binge watching episodes. I have a very unusual antique table whose legs are carved elephant heads. I have shown it to a few antique dealers. They told me they have never seen anything like it before. What are your suggestions? As an aside, I am in my early 20s but always say I was born in the wrong era. I LOVE antiques; and, my home is full of unusual treasures. – KK, Kansas City, MO, Email Question

I am afraid the dealers to whom you showed the table were not completely honest. Unless they are fairly new to the trade, they most certainly knew the origins of your table.

“I have never seen one of those” or some variation of this phrase is a polite way of avoiding dealing with a question in the trade whose answer is most likely to disappoint the asker. The antiques and collectibles trade is a good news business. It is best to avoid bad news whenever possible.

A WorthPoint.com “table with elephant head leg” search revealed 176 listings. There were dozens of elephant head leg variations, most carved from wood but some made from cast iron. The quality varied from outright ugly to kind-of-nice. Table tops varied from round to rectangular, almost always with chamfered corners.

There are three time periods for these elephant head leg tables. The first is the last decade of the 19th century and the first decade of the 20th century. The second is the late 1920s and early 1930s. Tables from these first two periods demonstrate a modicum of quality.

The third period is the 1950s and early 1960s when cheap Southeast Asia carved furniture flooded the American discount furniture market, the era of the movies “The King and I” (1956) and “South Pacific” (1958) and the Tiki Bar. The furniture was crudely carved and often cracked as it aged.

I did not find an exact match for your elephant leg table on WorthPoint.com. I suspect the absence is due to the fact that buyers for 1950s/early 1960s Southeast Asian carved furniture are minimal.

In the good news department, not everyone owns one and the table is definitely a conversation starter. Secondary market values are all over the map. Although you did not provide a size in your email, it appears your table is an end or occasional table. A fair secondary market value is between $70.00 and $90.00, albeit its buyer’s appeal is limited.

I have a pair of 16-inch high candlesticks that were inherited from my husband’s grandmother. On the bottom is a sticker that reads: “The Armor Bronze Company / New York.” I have tried giving them away. My children refused to take them. Is it worth trying to sell them on Craigslist? – MH, Email Question

My concern is that your candlesticks were once plated with a bronze or other coating which has been lost due to excessive cleaning. It is hard to determine the exact condition from the images that accompanied your email.

The Smithsonian Library has scanned the National Metalizing Company 1900 catalog of “Book Ends, Door Stops, Art Objects, and Table and Floor Lamps.” Armor Bronze was its marketing brand. (See https://library.si.edu/digital-library/book/armorbronzeartis00nati). The catalog did not contain any candlesticks, although several of the lamp bases were close matches for the pair of candlesticks you own.

I checked WorthPoint.com. At 16” high, your candlesticks are almost too tall for a table or dining room sideboard but too short for use on an altar. They might work in a funeral parlor or lodge hall. WorthPoint.com has a few listings for altar size Amor Bronze candlesticks. The only tabletop pair sold through on eBay for $15.50 on June 10, 2012. The lack of listings means one thing – the absence of a viable secondary market for any form of Amor Bronze candlesticks.

Clearly, you do not want to send your pair of candlesticks to the landfill, although it is a viable option. Donate them to a local charitable organization such as Goodwill or the Salvation Army. The organization will decide if the candlesticks’ value is scrap or resale. Meanwhile, your problem of what to do with them has gone away.