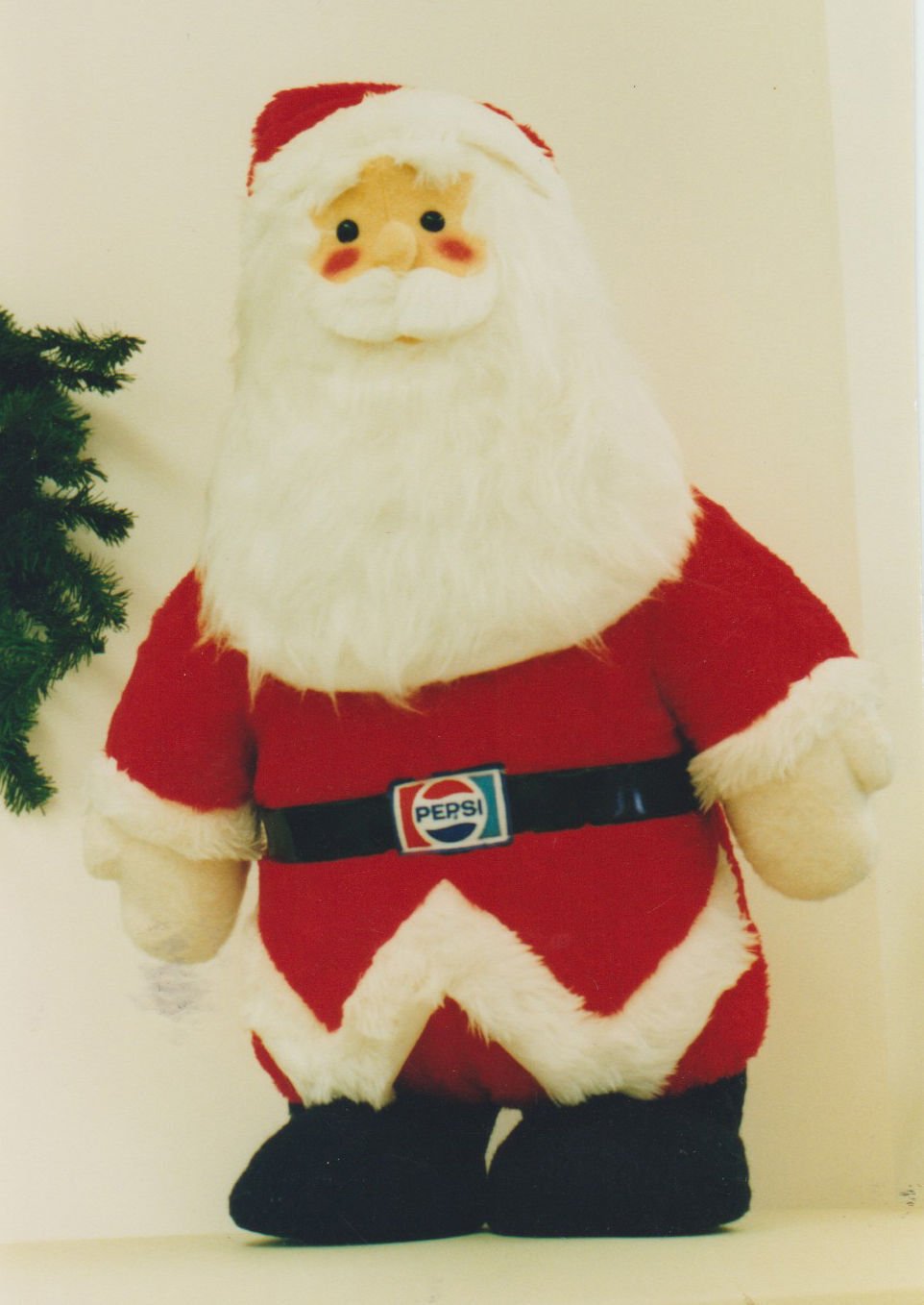 The “sugar sack” Pepsi Cola Santa is difficult to find. It was made by Animal Fair, Eden Valley, Minn. And is about 30 inches tall. Photographed by Mary Jane Lamphier. 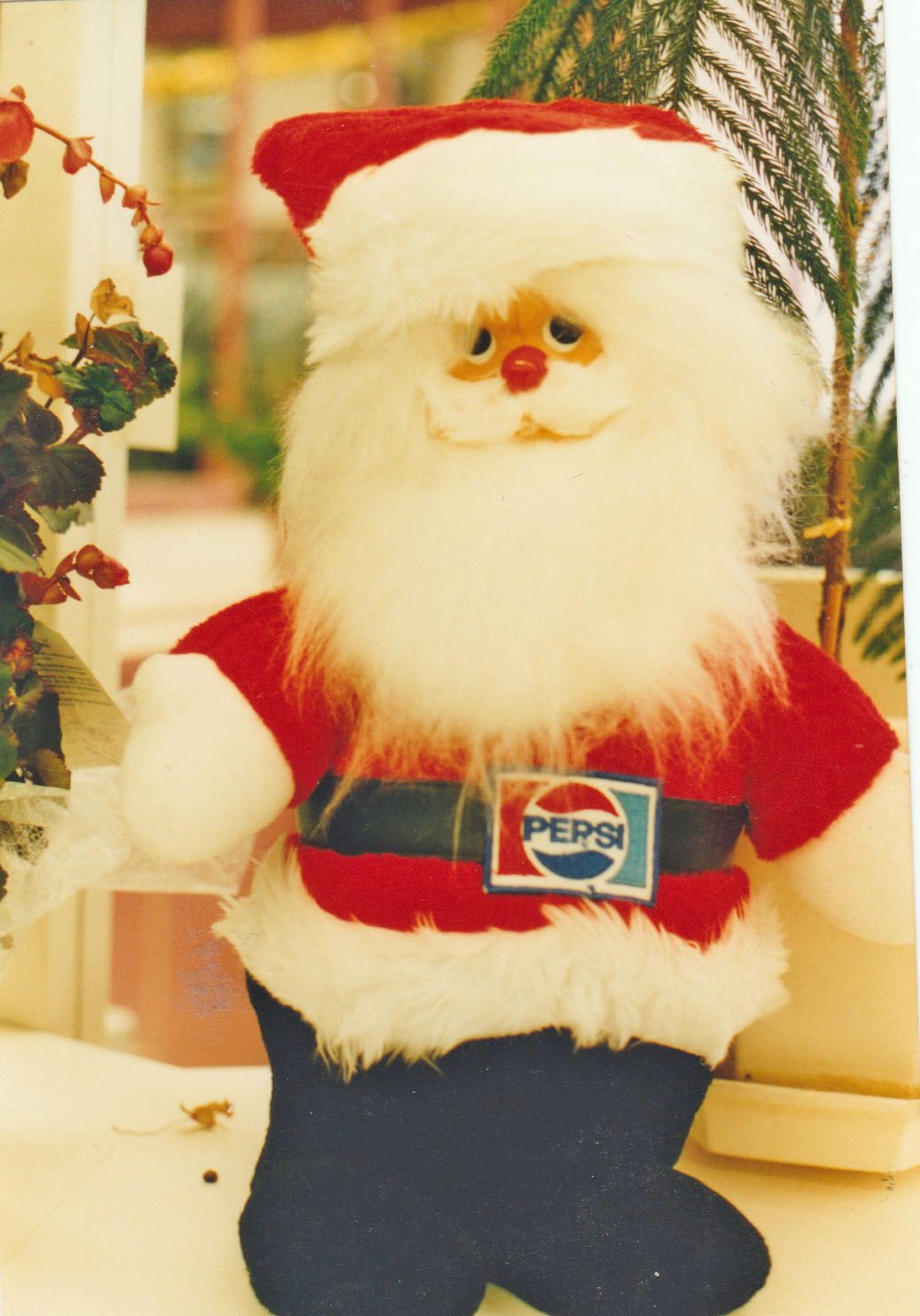 The “sugar sack” Pepsi Cola Santa is difficult to find. It was made by Animal Fair, Eden Valley, Minn. And is about 30 inches tall. Photographed by Mary Jane Lamphier.

Caleb Bradham concocted a soft drink called “Brads Drink” in 1898. He renamed the drink Pepsi-Cola and the name was registered with the U.S. Patent office in 1903.

In the early 1900s the Pepsi-Cola advertising slogan was, “Delicious and Healthful.” The drink was endorsed by automobile race pioneer. Barney Oldfield. Oldfield’s testimony claimed Pepsi-Cola as a “bully drink-refreshing, invigorating, a fine bracer before a race.”

The Pepsi-Cola history reveals traumatic problems in the 1920s. According to “The Pepsi-Cola Story” published by the Pepsi-Cola Company in Purchase, New York, the company changed hand five times in 15 years. However by the 1930s, Pepsi-Cola popularity increased dramatically. Perhaps it was a direct result of their new marketing strategy. The turning point seemed to be in 1934 when they began selling twelve ounce bottles of Pepsi-Cola for only a nickel – twice as much as other soft drinks for the same price.

In the late 1930s Pepsi-Cola met advertising success with,” Pepsi-Cola Hits the Spot,” the company jingle that made broadcasting history. It was recorded in 55 different languages. About the same time two colorful characters, Pepsi and Pete arrived on the Pepsi-Cola scene. Pepsi and Pete appear to be over fed keystone cops. These comical guys were busy hawking the drink that offered consumers, “Twice as much for a Nickel Too.” They appeared in comic books, advertising signs, ink blotters, all Ad World collectibles today.

By the 1970s Santa Claus began appearing in the form of plush dolls. They range from 19 to 30 inches tall. First they were given to Pepsi-Cola dealers when they made large orders of Pepsi-Cola. The company continued to give plush Christmas characters; Santa Claus in several sizes, snowmen with Pepsi-Cola hats and scarves, penguins 30 inches tall, little angels, Santa’s elves and reindeer. The production of advertising characters lasted into the middle of the 1990s. All are a challenge to find today.

The Pepsi-Cola Santa has a traditional fur like red suit and cap, a fur-like beard and mustache and fur trimming the cap, mittens and coat. Santa wars black boots.

The suit, faces and bodies vary. They may be a “half figure” stuck in a chimney made of cardboard. There are dolls with divided legs or Santa with a “sugar sack” shape and no legs.

The most common feature that identifies the Pepsi-Cola Santa is the belt buckle. They are the embroidered red, white and blue Pepsi-Cola logo.