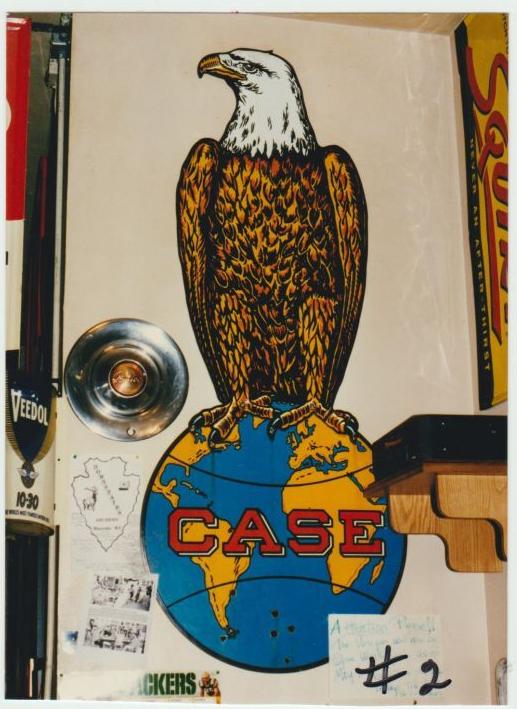 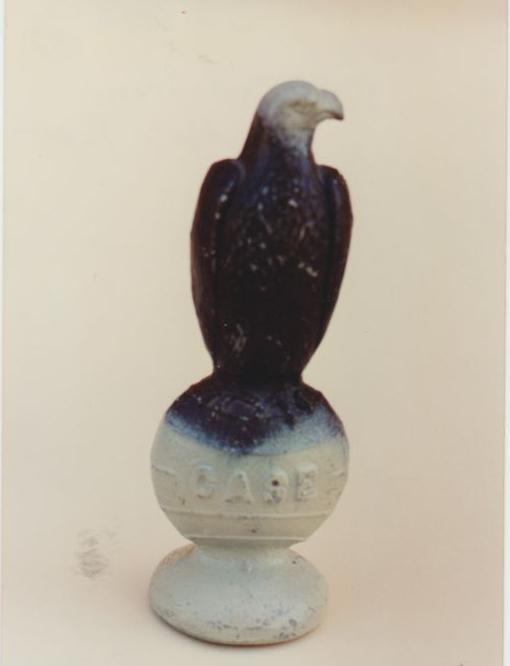 A 1950s, JI Case cast iron paperweight, that is 8.5 inches tall. The eagle is perched on top of the world with CASE molded in the cast iron.

A 1950s, JI Case cast iron paperweight, that is 8.5 inches tall. The eagle is perched on top of the world with CASE molded in the cast iron.

Boscobel, Wisconsin, is a small town known as a sports men’s paradise. I went hunting loaded with a 35 mm Canon camera. A huge turkey was standing on a sign that said, BOSCOBEL, “Turkey hunting capital of the World” and “Birthplace of the Gideon Bible,” “WECOME TO BOSCOBEL.”

I discovered Boscobel has many historical buildings that have been saved to preserve the cities architectural heritage. The Boscobel Hotel, a three story native limestone landmark, built in 1865, is located in the heart of the downtown area.

Rather than walking through the woods hunting for turkey, I spent most of my time at the UNIQUE CAFE and there was a couple reasons for that. Number one it was lunch time and number two, the café was decorated with a décor that took on a life of its own. To begin with the two story building was built in 1869 and the original façade remains. Visiting travelers sit in wooden booths and they are treated with made-from-scratch cooking, including fresh home- baked peach pie.

The décor is actually an eclectic collection of antique tools, old photos, advertising signs and other collectibles. As a writer for Collector’s Journal, and collector myself, I felt like I was in 7th heaven. The owner told me, he collected one of everything and after looking around I believed him, for example, there was a John Deere pedal tractor on the freezer; brown bottles on the windowsills; and trademark advertising signs everywhere!

One of the more unusual pieces was the huge, at least 6-feet tall, J I Case Co advertising sign. The Case implement Bald Eagle has found a roost on the top of the world. As far as I know, there was nothing for sale in the café except good food. I asked for permission to get out my Canon and capture a few Ad World characters.

I returned home with many photos of the advertising collection. Today I have included two JI Case photos. One is of the JI Case paperweight from the 1950s, called the Old Abe paper weight. It is 8.5 –inches tall and is made of cast iron. The other picture is the JI Case eagle I mentioned, that resides in the UNIQUE CAFE. The metal sign is from the 1950s also. It is painted with enamel paint.

Both collectibles today are scarce, searching the Internet auctions I found a variety of prices, for the sign from $100 -$150. I did not find the cast iron paper weight at this time but I imagine Ad World collectors or paperweight collects would be will to part with the same amount of money for it. Good luck finding the JI Case on top of the world.