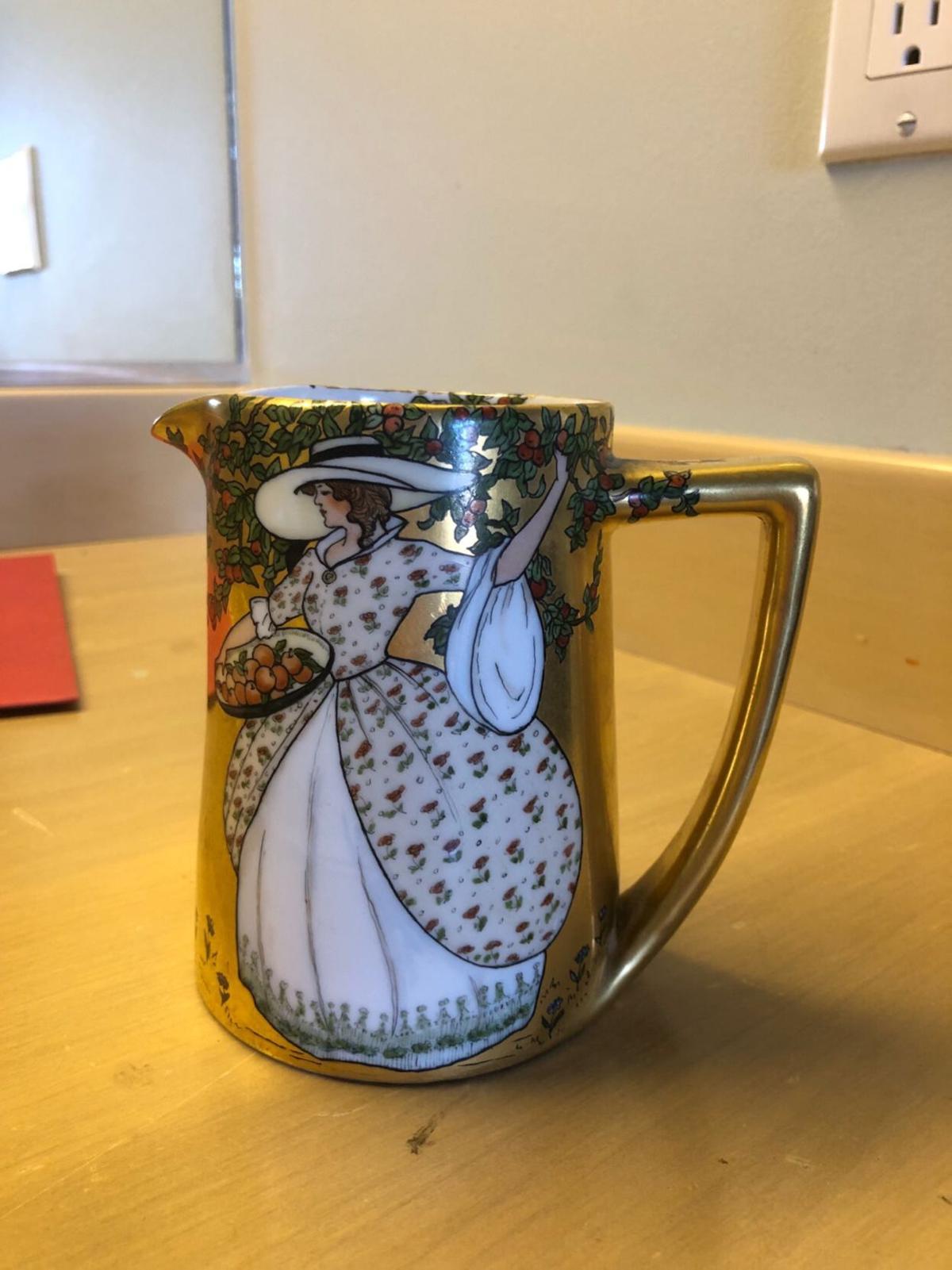 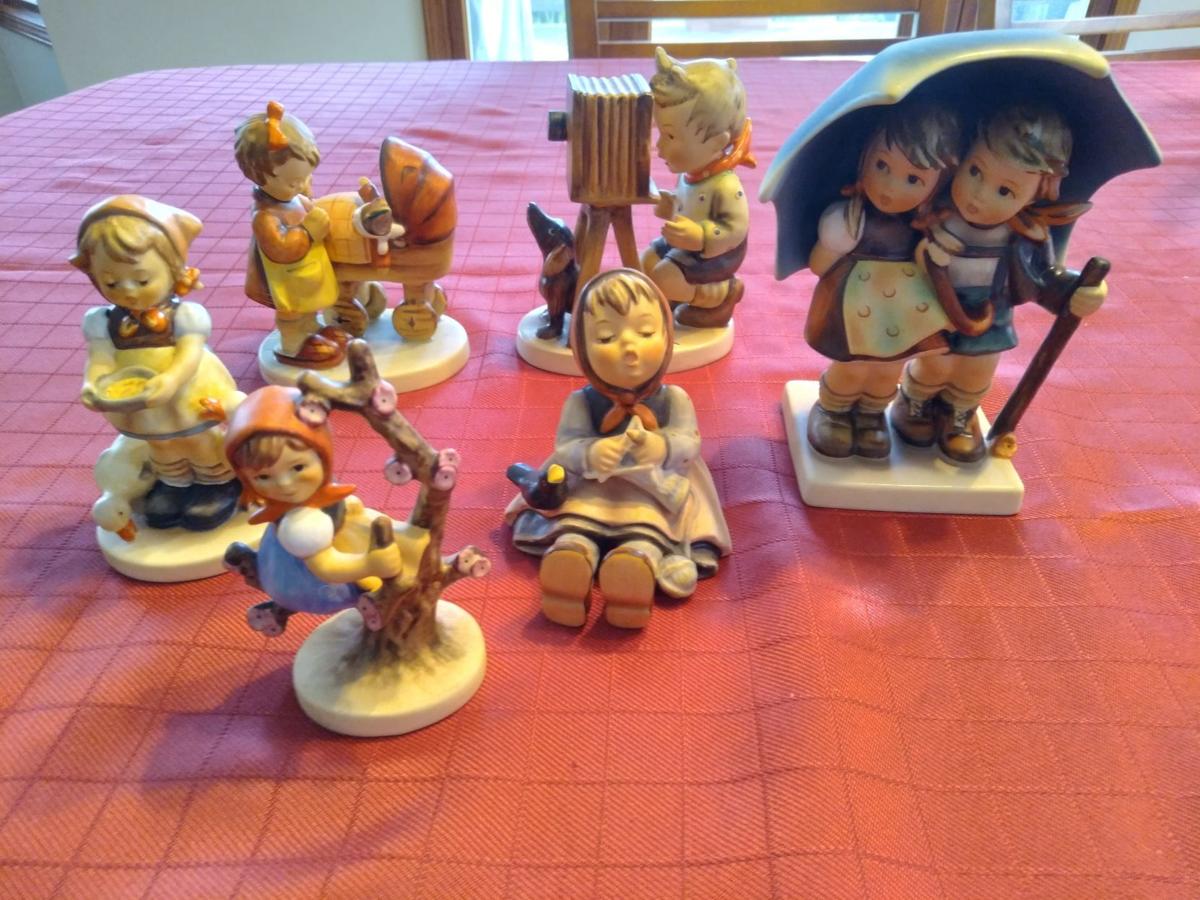 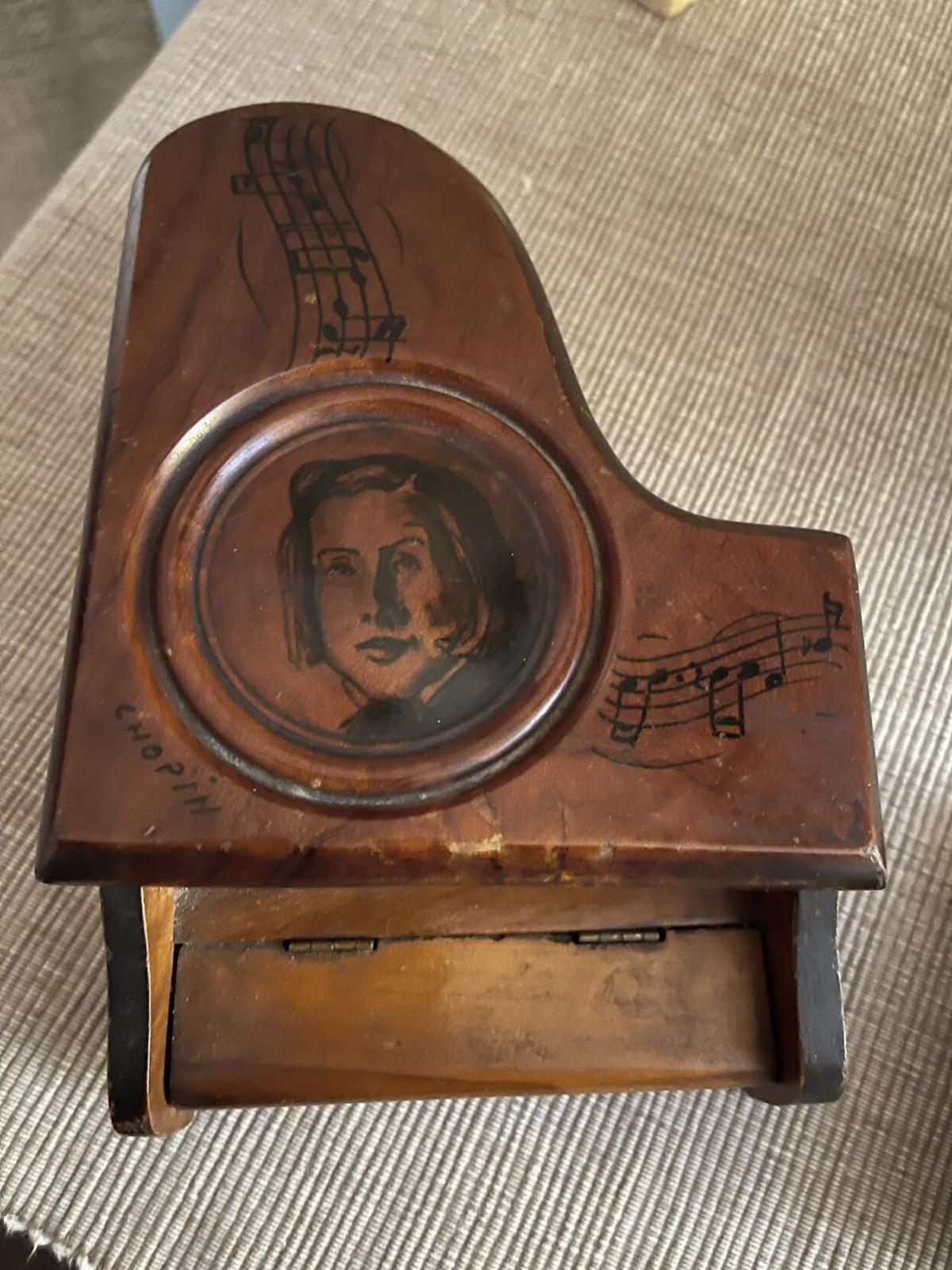 QUESTION: I have a pitcher that measures five inches in height, has a cylindrical body, and a reverse “D” shaped handle. The background color is a bright gold. The decorative motif is a woman in a colonial-style dress picking apples from a large apple tree. The bottom has a hand painted name and date “Evelyn H. Fouts / 1916.” There is a faint four-part maker’s mark with some text. One of the symbols is a crown. I cannot make out the others. The letters appear to be part of longer words. Again, I cannot decipher them. I received this as a gift. What information can you provide about my small pitcher? – CK, West Hills, CA, Email Question.

ANSWER: Your small pitcher is a product of an amateur but talented member of the china painting school. The blank was most likely made in Europe, albeit I consulted the English and German-Austrian ceramic mark books in my collection and could not find an exact mark match.

China painting became a fashionable hobby for wealthy young women in England in the 1870s. The trend quickly spread to the United States. Ceramic manufacturers began creating ceramic blanks to sell to the ceramic painting hobbyists.

In America, china painting was considered an acceptable “parlor craft” similar to glass painting and watercolor. Dozens of books on china painting were published during the china craze of 1880 to 1920. John Charles Lewis Sparkes’ “A Handbook to the Practice of Pottery Painting” is an example. The book was published by a supplier of artists’ materials.

Some of the amateur china painters went on to distinguished careers. In 1887, Luetta Braumuller of Monston, Massachusetts, launched the “China Decorator: A Monthly Journal Devoted Exclusively to This Art” in 1887. It ceased publication in 1901.

The used of gold ground for amateur painted ceramics was extremely common. Although working late in the craze, Evelyn H. Fouts had evolved into a highly skilled amateur.

Most amateur ceramic painters gave their products as gifts as opposed to selling them. If possible, ask the person who gifted you the small pitcher to share with you where it was acquired. Generally, these pieces enter the secondary market in the same location the piece was painted. Check the local newspaper obits from 1916 to the end of the 1930s to see if you can find out information about Evelyn H. Fouts.

Your small pitcher has a high decorative and conversation value. Its collector value is minimal. A strong secondary market value is between $25 and $35.

QUESTION: I recently inherited my sister-in-law’s cherished Hummel figurines and ornaments. When I offered them to most collectible dealers, I was told they had no interest. Two dealers did offer me $5 apiece. I know nothing about Hummels. When I searched eBay, there is a huge range for the same figure depending on when it as produced. None of the Hummel figures have TK marks. A few have MJ Hummel on the back of the base. The collection includes HUM 1391/2053 (Playful Pals) and 1332/2056 (Peaceful Offering). The Hummel ornaments date from the early 1990s. Do you think it is worthwhile to have the collection appraised? I am at a total loss at what to do. – DS, Email Question

ANSWER: Do NOT pay someone to appraise your collection. The cost could easily exceed the secondary market value for the collection. You can do you own appraising. Hummels have a two-, three-, or four-digit mark. Do an “Advanced” eBay search. “Check the “Sold listings” box under the “Search including” section. Enter the Hummel number and click the search button on the very bottom.

I did a search for Playful Pals. According to eBay, examples sold through starting around $30 and ending near $50. Most sellers wanted an additional $8 to $10 extra for shipping.

Be suspicious of prices with only one bid. This may be from a friend of the seller’s helping him or her create a false secondary market value. The only cost to the seller is the eBay listing and commission fee to do this.

The secondary market for Hummel figurines, except for the earliest examples (collectors pay a premium for examples with one of the first two marks), is weak. The good news is that there is a secondary market.

The standard rule of thumb for the past five years is that a small size Hummel with a later mark has a secondary market price of $12 to $15. Prices have risen in the past several years. $20 for a small figure is now the average price.

When teaching dealers what to pay when buying an object for resale, my standard rule is: double the purchase cost, pay expenses; triple the purchase cost, pay yourself as well. Given this, while the two dealers’ offer of $5 apiece is low, it is not unreasonable. An offer of $7.50 to $8 apiece would be fairer. The larger umbrella boy and girl figures should bring double the above values.

Since you want to sell the Hummels as opposed to keeping them (a decision I strongly support), the sale price becomes a “money-in-hand” issue. At $5 apiece, you have money in hand. How much time, effort, and cost will be involved in raising the price to $7.50 apiece or attempting to get full secondary market value on Craigslist or Instagram? The answer to the first part is a fair amount based on your ability to find a dealer who specializes in selling Hummels who is willing to pay the added price. The answer to the second part is forget it. If you take this approach, you will earn less than minimum wage.

Some final thoughts: If it is not about the money, gift them to a charitable group and let them sell them. Given the new tax laws, you will not be able to claim a tax deduction. You could try a consignment shop. Most will charge a 50 percent or higher commission to sell them. It is highly likely when the sale is done, assuming they do sell them, that you will average less than $5.00 apiece.

The Hummel figurines were precious to your sister-in-law. They are not to you. My final advice is simple – any money is better than no money; and, once sold, they are no longer your problem (responsibility).

QUESTION: I have a wooden piano music box that I purchased in the early 1980s. The piano lid has an impressed image of Chopin and a stenciled bar of music. I would like to have it authenticated. I welcome any information. – CR, Email Question.

ANSWER: If you are looking at your music box, it is authenticated. What you really want to know is its history and value. This is called an appraisal.

As you will note from the above, there is little recent and no apparent United States demand. Assuming the music mechanism works (if not, your music box has no value), a fair secondary market value for your model of this piano is between $10 and $15. Add another $10 if the potential buyer confesses a love of Chopin’s music.