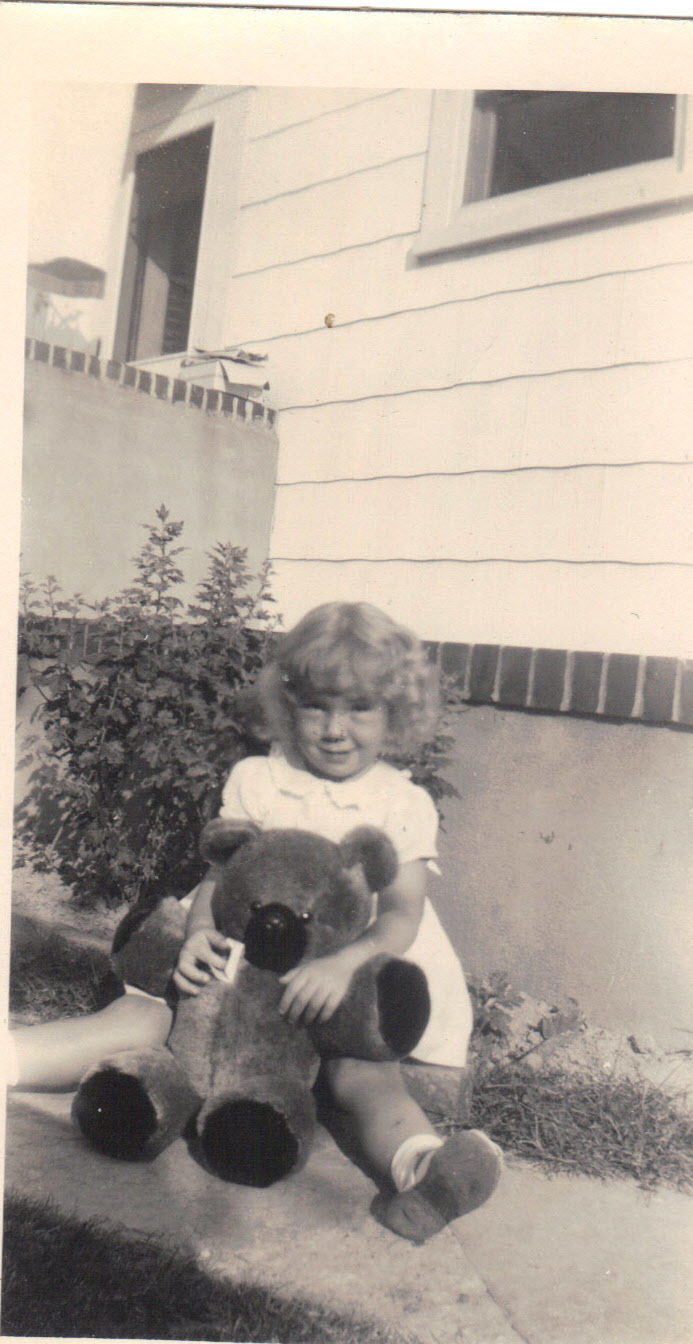 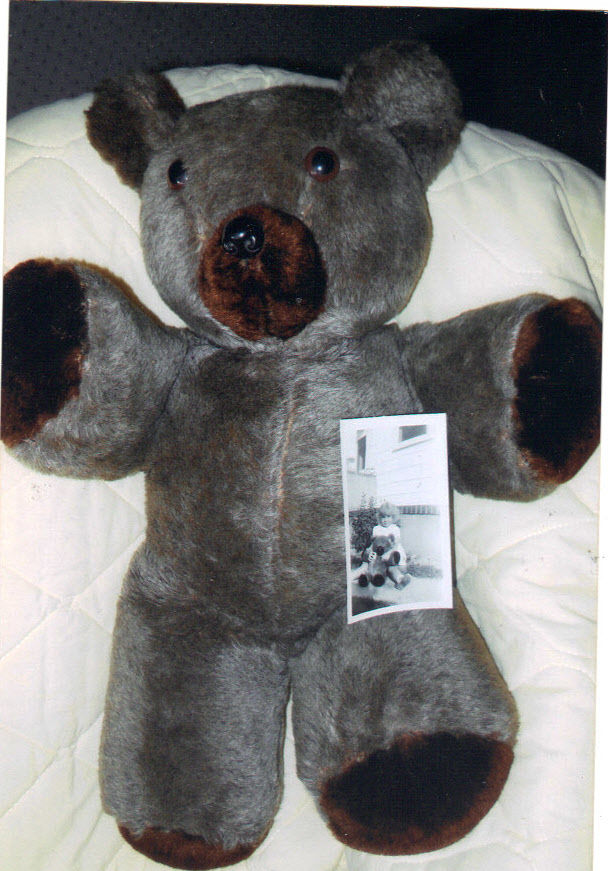 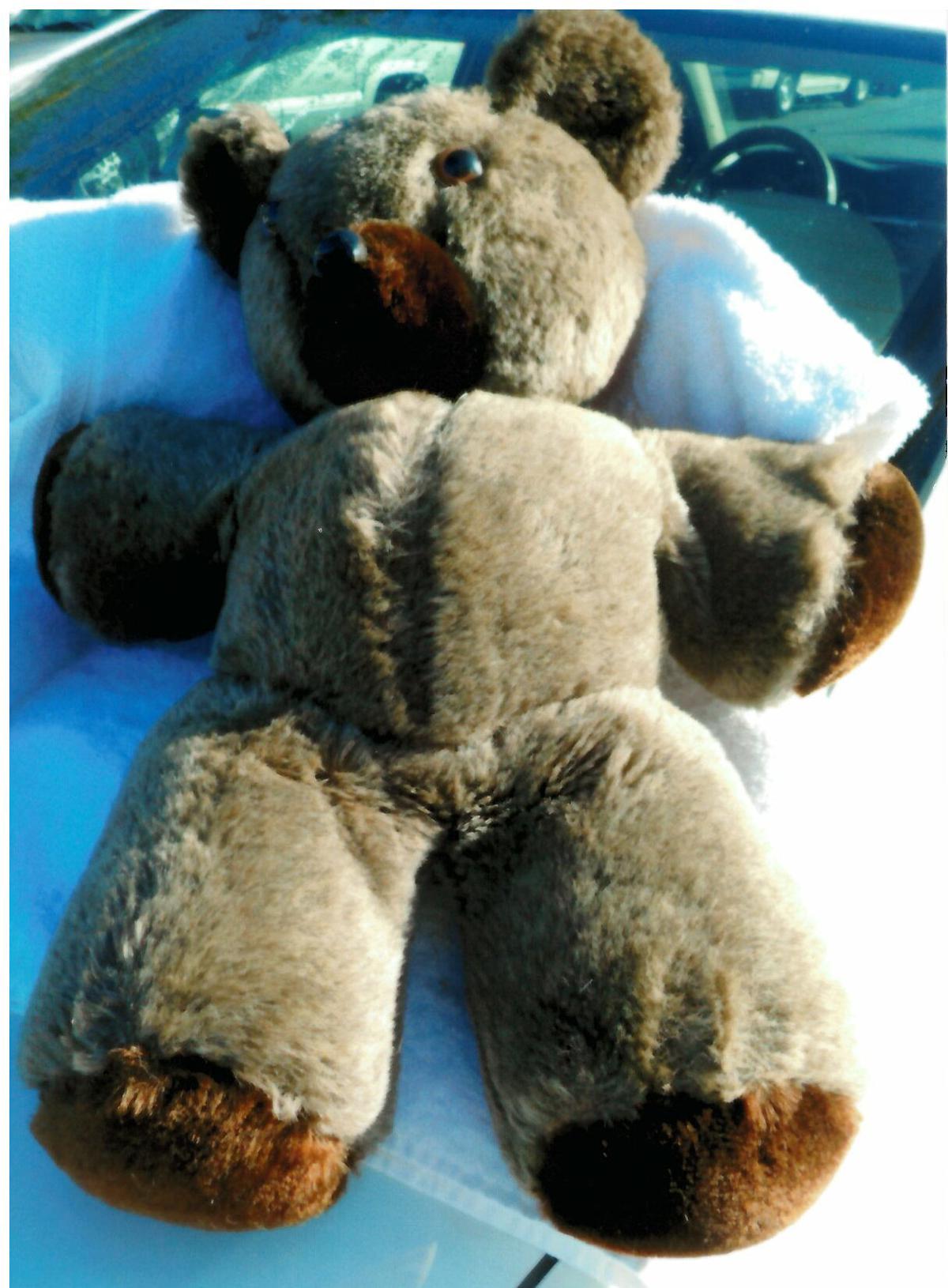 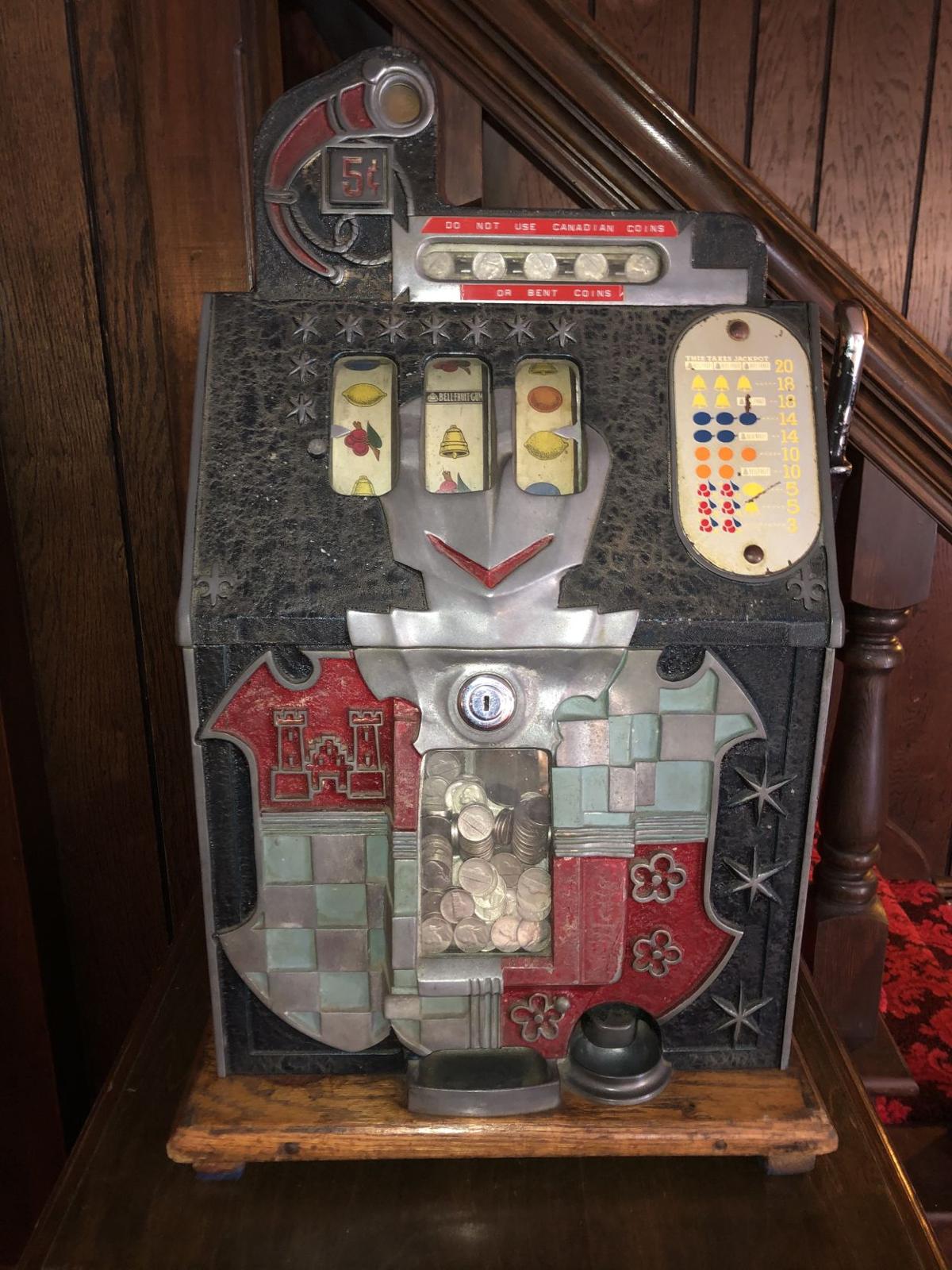 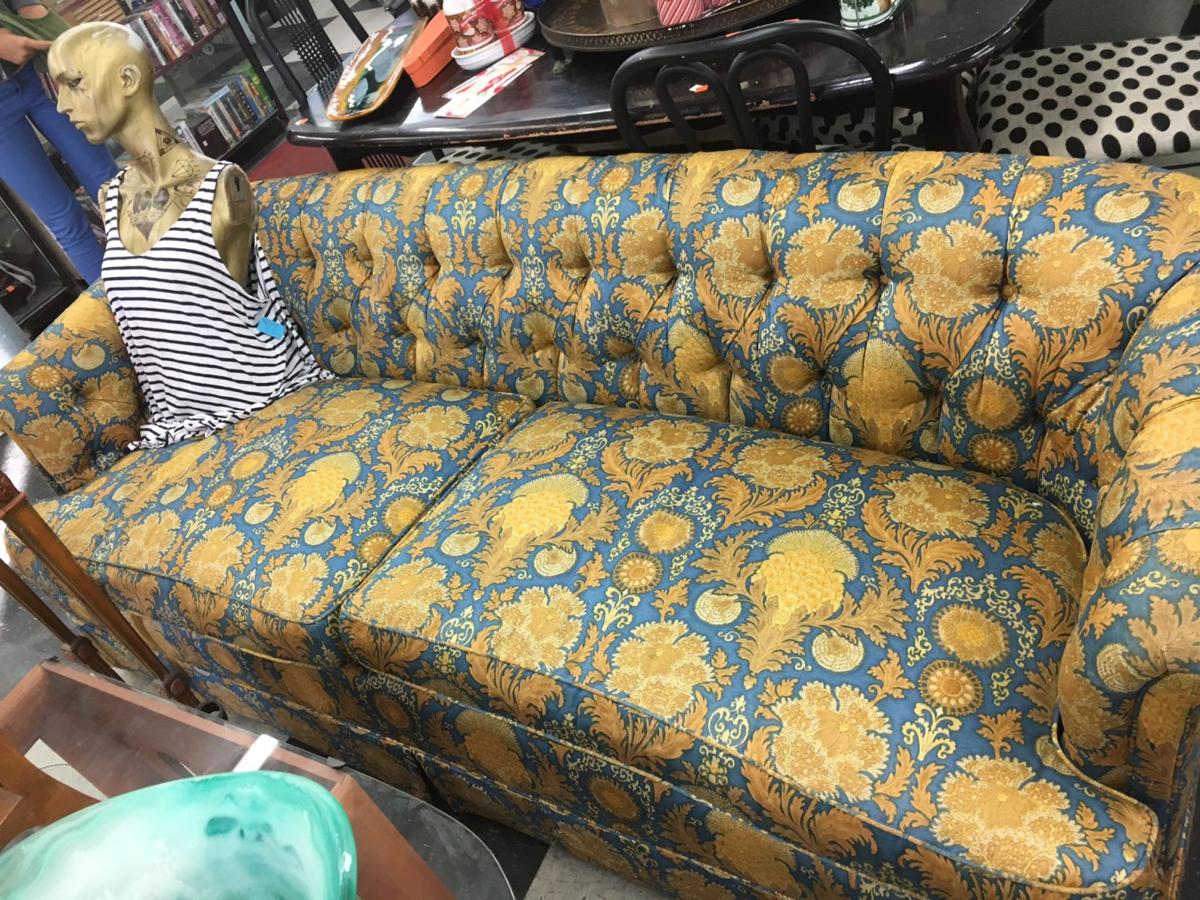 I received a stuffed plush toy teddy bear in 1946 when I was two years old.  The bear has a brown body with a touch of gray.  The nose is darker, almost black.  The round circles at the end of the paws and feet are chocolate brown.  The bear is approximately 14-inches tall and 12-inches paw to paw.  I have a picture of me holding the teddy bear.  I participated in the Maryland Collectibles show sponsored by Maryland Public Television.  The toys specialist could find no reference to the bear in his search.  I would love to know its origins and value. – DR. Glen Burnie, MD, Email Question

There is no monetary value high enough to represent the emotional and sentimental value the teddy bear has for you.

I looked through over 1,000 teddy bear images on WorthPoint.com in hopes of finding an identical match for your teddy bear.  Although I did not find one, I learned some useful information.

First, your teddy bear was not made by a major teddy bear/doll manufacturer.  These teddy bears all had padded paws, that is to say, a felt pad that cover the lower half of the paw from its tip upward two to three inches.  Also, the round patch that covered the full bottom of the foot was not used.

Second, the late 1950s and 1960s was a time when two-toned teddy bears were common. Most bears featured two colors in the face, one for the nose and another for the face.  In some cases, a lighter body contrasted with a darker head, paws, and feet.

You own a generic teddy bear, one that was mass-produced and sold inexpensively at mid-sized department stores or through mail order catalogs.  It was targeted at a younger audience (age 1 to 3) as opposed to the more sophisticated teddy bears targeted for older (and perhaps wealthy) children.

Since there is no manufacturer tag on your teddy bear, determining the maker will be difficult to impossible.  Try looking at the 1946 Christmas mail order catalogs from Montgomery Ward or Sears Roebuck and Billy and Ruth and other catalogs from toy wholesalers.

I own a large collection of merchant stamp redemption catalogs covering the period from the late 1940s through the 1990s.  I checked the mid-1940s and early 1950s catalogs for Gold Bond, Plaid, Top Value, and S & H Stamps.  I found several comparable teddy bears listed in them but not one that was an exact match to the one you owned.

Your teddy bear’s secondary retail market value is under $50. The picture of you holding it adds another $5 to $10 to the value.  There is no way you are going to let go of it for this or any other value.  The value for most childhood toys is not their dollar value but the memories they have for those who owned and played with them.

I own a nickel slot machine.  The metal front has a heraldic shield.  The machine works although the payout instruction pad and three round disks of fruit inside show a great deal of wear.  There is a decal label on the side that reads: “Ringer for Bells / Milt Bilt / Savannah, GA.”  Is this the company that built the machine?  If not, who did?  What is its current worth? – DH, Diamondale, MI, Email Question

The Mills Novelty Company of Chicago sold coin operated machines that included jukeboxes, slot machines, and vending machines.  Mortimer Mills of Oak Park, Illinois received his first patent for an improved “coin-actuated vending apparatus” in 1891.  The Mills Owl, the company’s first slot machine, was made in 1897.  When Mortimer sold a controlling interest in the company to his son Herbert, the company became the Mills Novelty Company.  In 1907, Mills produced Miss Liberty Bell, a slot machine.  By the end of the 1920s, Mills expanded its business to include a wide variety of coin operated machines.  In 1935, Coca-Cola hired Mills to design a standing, dry automatic cooled vending machine for its bottles.  In 1946, Mills Novelty Company created a separate corporation, Bell-O-Matic, to make slot machines.  By the early 1960s, Mills was the second largest American manufacturer of slot machines after Jennings & Company.  Eventually Bell-O-Matic was sold to American Machine and Science who also had purchased Jennings & Company.

The decal label on the side of the machine is either for the company that owned and leased the machine or sold and serviced it.  I could find no information on the internet about the company.

The slot machine appears to be in good to very good condition.  Although it is working, it most likely needs professional restoration.  Don’t you try to do it.

I have an upholstered couch made by the Paine Furniture company.  The flower pattern fabric appears to be from the 1960s or 1970s.  There is wear and tear in the fabric, especially the cushions.  Does it have any secondary market value? -- AR, Email Question

The problem rests with the fabric condition and style.  The cost to reupholster the couch far exceeds its secondary market value once the reupholstering is finished.  It makes no difference who is the manufacture of the frame.

The exceptions are period upholstered pieces with a strong modernism flare.  Your couch does not fit this criterion.

My daughter recently purchased a home that was owned by an avid golfer.  The owner left behind a Red Mill Mfg. Co. brown colored statue of a man with a right arm extended at the elbow.  The piece is marked “Titleist” on the front.  The number “671” is on the back and possibly “Burgher / 1997.”  I cannot find a picture on the internet.  Does it have any worth? – RD, Email Question

The Red Mill Manufacturing Company, located in Fishersville, Virginia, made your golf figurine.  The company produced a wide variety of animal and human figurines.  A foil sticker in addition to the body marking was used to identify the company’s products.  Red Mill products were marketed through gift and novelty stores.

The figurines are molded from a crushed pecan shell and resin mixture.  Local artists created the sculptures used to create the molds.  When the figurines were removed from the molds, they were rubbed with a soft cloth to enhance the patina.  The amount and color of the pecan shells produced a variety of brown tones.

The Red Mill Manufacturing Company ceased operations in 2001 due to the death of one of its owners.  The molds were sold.  Recasts are being made in China and marketed under the name Red Mill Craft Company.

WorthPoint.com has 12 listings for the Red Mill Titleist golf figurine.  During the past three years, the average sell through price was around $13.25.   The price indicates there is little secondary market demand for the figurine.