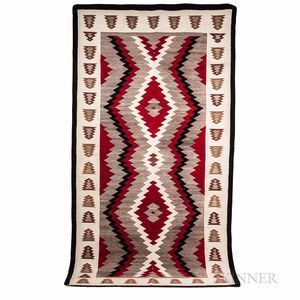 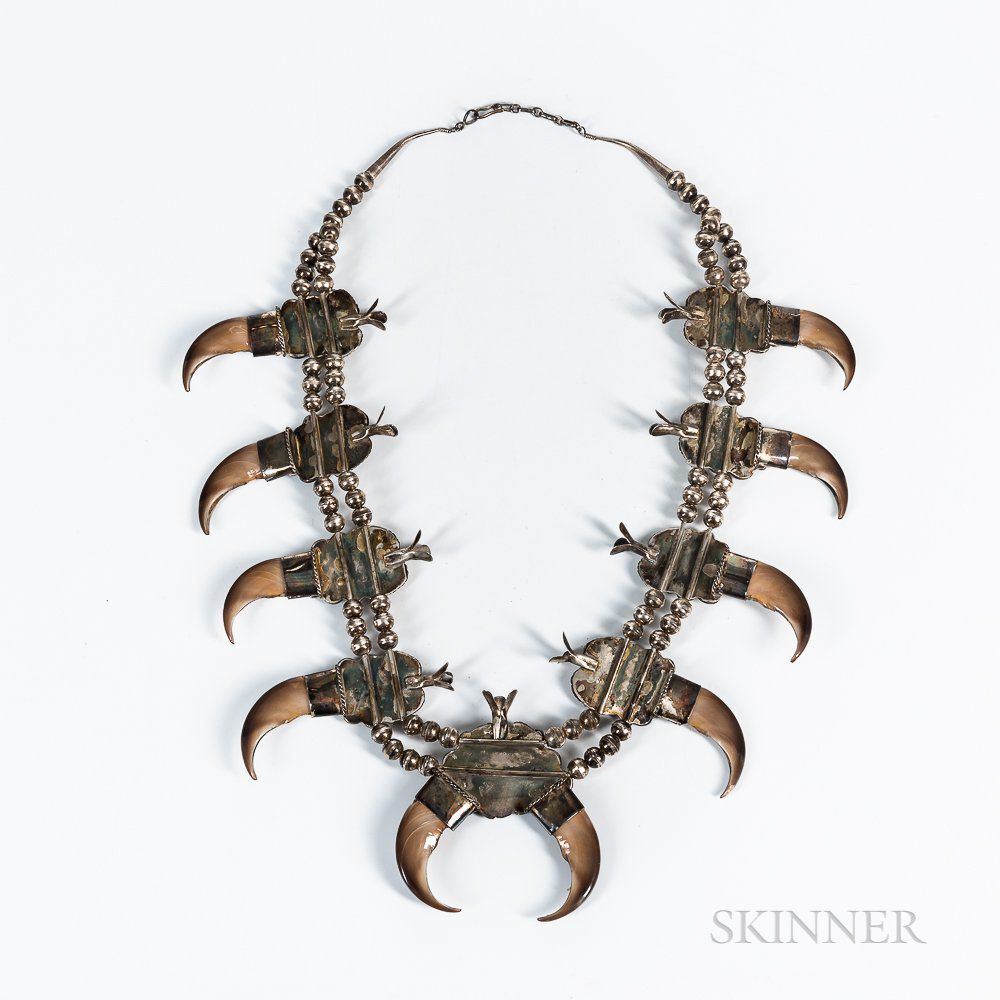 For collectors of Native American objects the July 22, Skinner Auction offered some bargains and some affordable prices. Pricey were some contemporary pieces that sold way over modest estimates. A Navajo silver/turquoise and bear claw necklace fetched $1,375 over an estimate of $400/500. A large, contemporary, Navaho rug sold for $1,375 over a $400/500 estimate. A pair of women’s beaded, northern plains moccasins, c.1900 fetched $1,750 over a $400/600 estimate. These were dramatic examples, as the catalog photos showed.

Since the 1970s there have been many serious collectors of not only ancient but early 20th century Native American art and crafts, and steadily rising prices.

The polished, black Pueblo pottery of Maria and Julian Martinez, first made in 1919, was among the first 20th century Native American objects to be collected, and create name recognition for them.

What first attracted Langley to Native American art were baskets and pottery. I well remember when in my teens on my way to California, at a train stop, Native American were selling their handmade baskets. I wish I had bought one.

As she told me, “There was little or no information about the artists and the baskets weren’t signed.”

Historically, it was only when Native Americans were confined to Reservations did families begin creating works of art, meant to be passed on to others.

As Langley discovered when researching pottery, it could only be identified by tribal techniques and characters. It wasn’t signed. For example, Acoma, San Ildefonso, Zuni and Hopi Mesas were still painting deer, birds and identifiable symbols of their villages onto their pots. That led Langley to seek out contemporary artists and catalogue as well as list the characters of their work.

Since then textiles, blankets and rugs have become popular with collectors. As the Skinner auction showed, both early and contemporary textiles can be priced at thousands of dollars. The problem is that by their very nature of fragility many have not survived. Best known are those made by the Southwestern Navajos. Their rug and blanket weaving is so distinctive that historians have separated the styles into named periods.

It was in the 1980s that Native American items became viewed as serious investments. They began showing up at major auction houses and prices soared.

CLUES: Until about 1800 Navajo blankets used stripes in soft, vegetable-dye colors. From 1800 till 1875 stripes were combined with squares and figures. By 1895 the Navajos started making rugs of wool with commercial yarn and dyes. Colors were mostly brown, gray and white. By 1915, however there was a revival of the old designs and bright colors.

Back in the 80s Native American turquoise jewelry became trendy. However, over the years it has been faked and plastic. Check out the recent books on the subject to learn more about fakes.