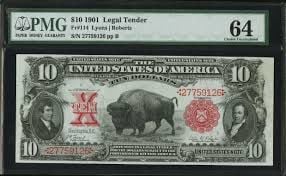 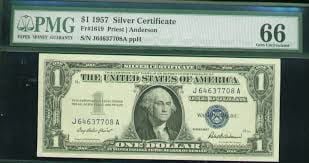 Paper money is an item that most people do not think of as being collectible. In actuality, some paper money, especially, of course, older money is quite scarce and quite valuable.

I will point out a few basic principles about paper money, and who knows, maybe you will find stacks of old money in a box in the attic. It would also be a great idea to ask any elderly relative you may have, such as grandparents, if they may still have some old paper money.

As with many other types of collectibles, condition is vital. The most valuable paper money, or notes, are in the best condition possible. Keep in mind that you do not want to fold notes, or even unfold them if they are already folded. Sure, paper bills last a long time even if they are constantly folded, but that does not mean that their value stays the same. Needless to say, the dollar denomination of the note is important, but I am only discussing basic principles at this point.

At some point, any paper money becomes brittle, and any fold, crease, or heaven forbid, a tear will detract from the note’s value. Try to keep notes flat, and put them in a place where they may not be jarred by other objects. In other words, don’t mess with them.

What is often overlooked is the country that the notes are from. My assumption is your notes are from the United States, but that may not always be the case. To your surprise you may have notes from Canada, Mexico, England, or other countries, and without further checking on your part, these notes may be very valuable or worth next to nothing.

Look to see what the size of the note is. Most of us carry in our wallet small-type notes that have been used since 1929 (with a few dated 1928). If you are fortunate and have notes that are larger, approximately 7 inches by 3 inches, those are the larger size type. The federal government from 1986 to 1929 issued those larger notes, and any of these notes are more valuable than the small-size current notes of today.

Nowadays, all current paper money says it is a Federal Reserve Note. But that has not always been the case. You might see the words “United States Note” or “Silver Certificate” or other words on some old paper money. In all, the United States has issued 12 kinds of paper money since the Civil War, and some emergency World War II notes for Hawaii and even North Africa.

Most guides are organized by denominations of the note. That may seem a bit obvious, but when you pick up a guide for the first time you can be thrown for a loss as to how to use it.

Next, check the date. Any price guide will list the notes by size, the kind of note, and series date. The quirk of the series date may surprise you. You need to remember that notes are not dated like coins, with some from every year. In fact, notes are dated from the time of the last change in design, or the last holder of the Office of the Secretary of the Treasury or Treasurer of the United States. In addition the series date can also be followed by a suffix letter. For example, you may have a Series 1969B $1 Federal Reserve Note. The previous note was not 1968 or 1969B, but rather 1969A. Sounds a bit tricky, and a bit strange, but it is true. If you have a Federal Reserve Note, locate the Federal Reserve district. It will have an alphabetized designation in a seal to the left of the portrait. The first twelve letters of the alphabet A thru L are used for the Federal Reserve District banks. And yes, the values of your notes can vary by district as well.

Once you have determined the kind of note you have, its denomination, its date, and possible Federal Reserve district seal, the next step is to figure out its grade.

The grade of the note is a key element in determining the value. The average person can see if the note has a lot of wear to it, and of course, folded notes are worth less than unfolded ones, and clean notes are worth more than dirty ones. A price guide will help you out. For example, trying to distinguish if your note is worth $5 or $10 based on the grade, will be of less importance than trying to determine if the value difference is in the hundreds or even thousands of dollars.

If you are curious as to the value of your notes, buy a guide, find the denomination and type of note you have, and then check the date column. If you merely have a few notes, you might just want to hang on to them, and pass them down to the next generation. On the other hand, if you have a quite a few notes you might consider either holding on to them or selling them. A monthly publication “Bank Note Reporter” will make you aware of the nation’s paper money dealers as well as paper money auction firms. Most of these firms will appraise your notes, at a price. If you do decide to sell your notes, you will most likely get top dollar with a larger firm.

Jeff Figler has authored more than 700 published articles about collecting. He is a certified professional appraiser and one of the world’s leading experts on collectibles. His latest book, “The Picker’s Pocket Guide to Baseball Memorabilia” has been #1 on Amazon. He can be reached at HYPERLINK “mailto:info@jefffigler.com” info@jefffigler.com.