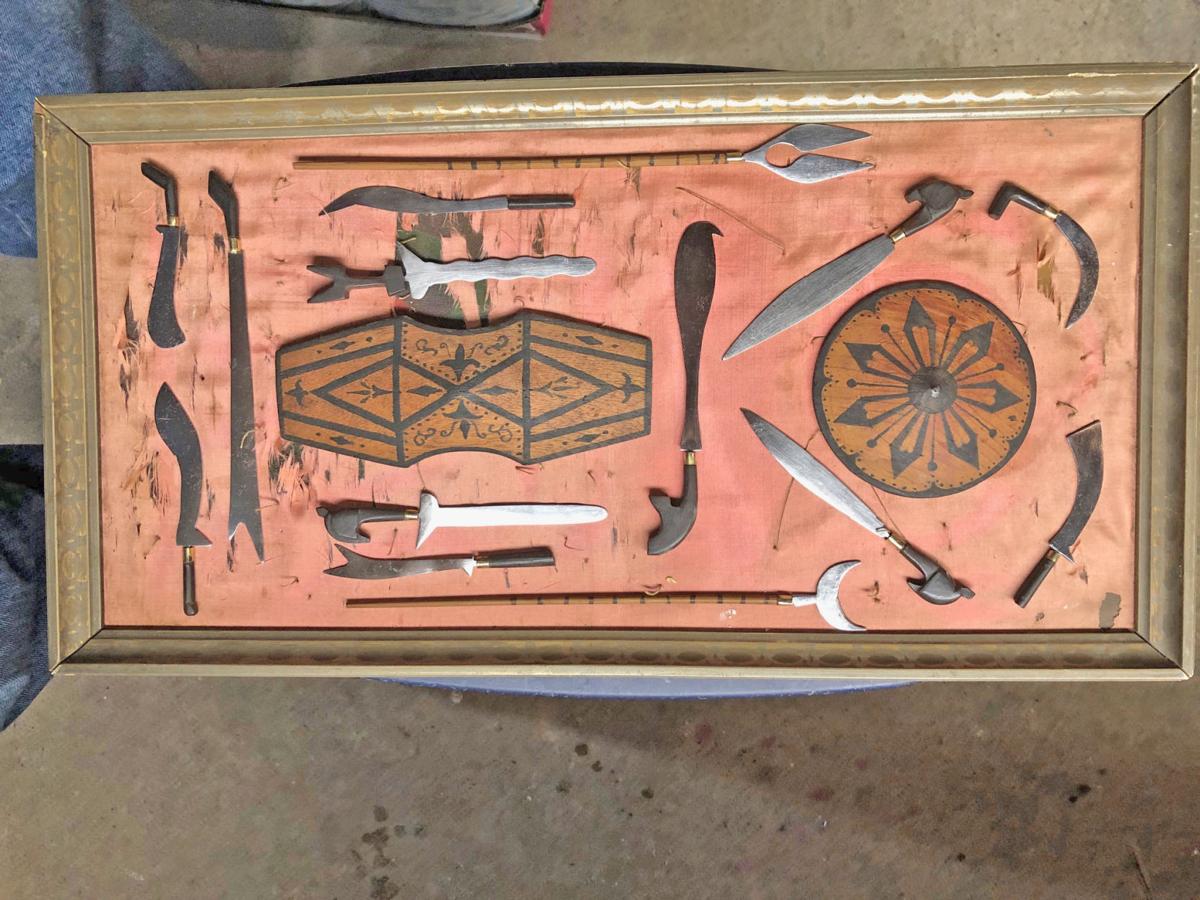 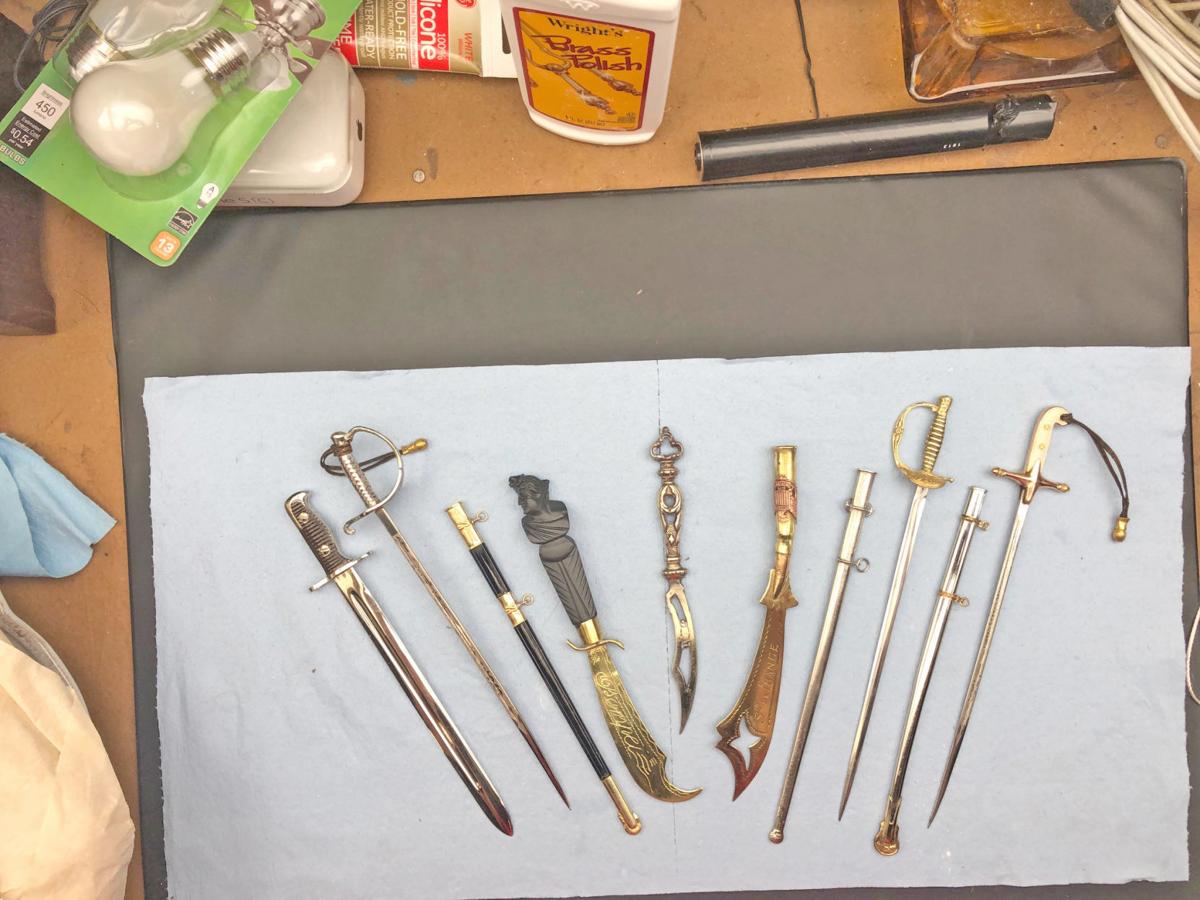 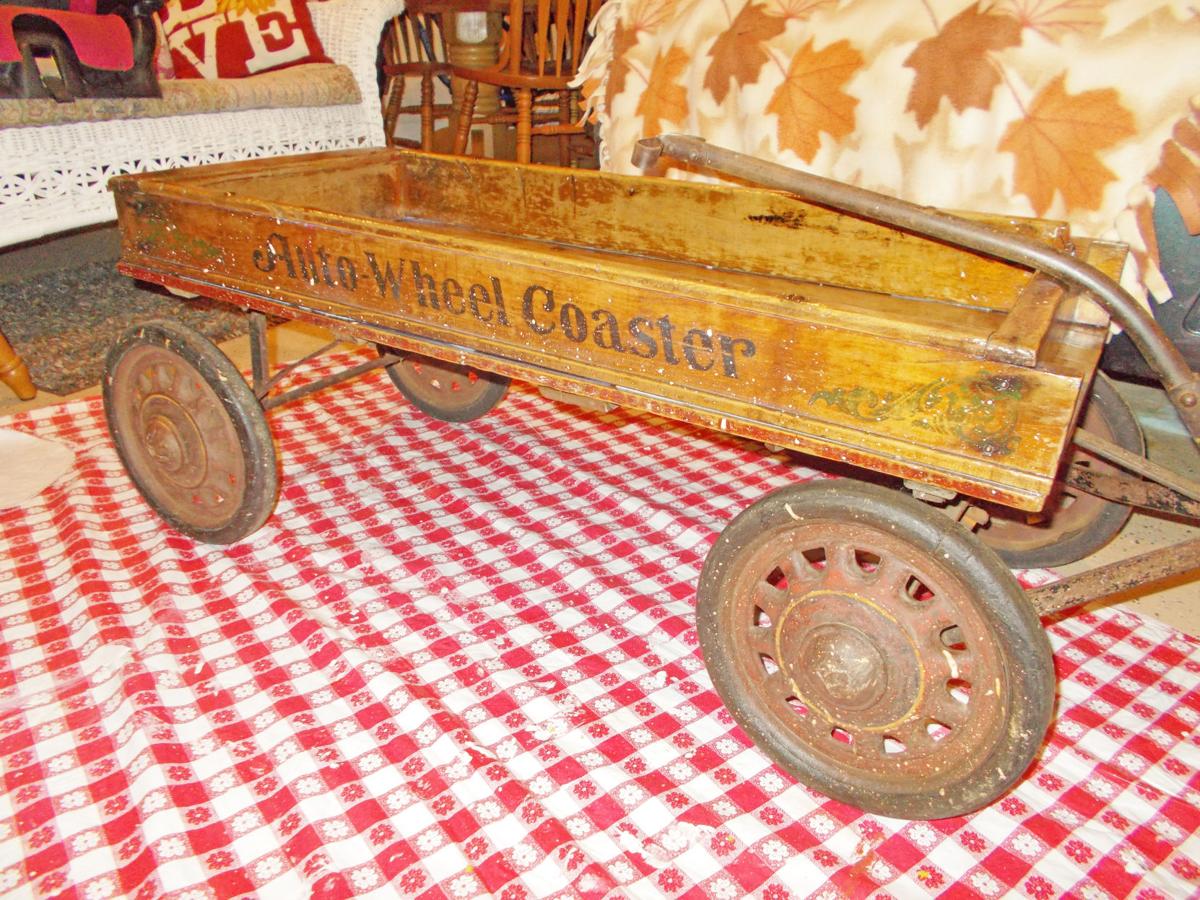 I am 71.  I have two miniature sword collections that belonged to my grandfather and were given to me by aunt.  The first collection consists of approximately a dozen miniatures swords.  One has an engraved head of Julius Caesar.  Others have symbols for the Army, Navy, and Marine Corps.  One resembles a German bayonet. The second collection is a group of miniatures swords and shields sewn onto a green silk-type cloth and mounted in a shallow sided wooden frame.  The wood back of the frame has a hand painted floral bouquet and two hand written paper labels that read: (1) “Philippine War Relics” and (2) “HAND/MADE.”  I have no idea how my grandfather acquired these items nor what he paid for them.  I am having custom shadow box frames made to display and preserve the items.  Any help you can provide in identifying these items and their value will be greatly appreciated. – SB, Reading, PA, Email Question.

The first collection of miniature swords are letter openers, most dating between 1900 and 1940, with the majority from the early 1920s to the late 1930s.  I encounter similar items when emptying the drawers in 1920s/1930s Colonial Revival Governor Winthrop secretary-bookcases owned by clients.  I found several examples in the drawers of my father’s desk when he died in 1966.

Miniature swords are collecting oddities.  There must be individuals who collect them, but their number is small.  Before proceeding, I decided to do a miniature sword “Best Match” search on WorthPoint.com.  Values were somewhat higher than I suspected.  Miniature cavalry swords sell between $20.00 and $40.00.  Generic sword types range from a few dollars to 10 dollars.

When I first saw the image of your “Philippine War Relics,” I immediately thought of the wall mounted shield plaques entitled “Weapons of Moroland.”  These shield plaques contain miniature models of weapons used by warriors from the indigenous peoples of Mindanao in the Philippines.  The shield plaques and their crudely made weapons are popular tourist items, a pop cultural icon, and displayed in homes to show “how Filipino” the owners are.  Weapons include a wide range of knives, such as the barong, kampilan, and kris, shields, spears, and swords.  [For more information see, https://en.wikipedia.org/wiki/Weapons_of_Moroland.]

You own a much earlier version of this tourist item.  The war referred to on the label is most likely the Philippine-American War, also known as the Filipino-American War, which began on February 4, 1899, and lasted until July 1902, albeit some insurgent groups continued to fight long after that date.

If you are 71, it is possible that your grandfather (or his father) or one of his brothers, cousins, or friends may have fought in the Philippine-American War and brought this home as a souvenir.  The painting on the back and the aging suggests an early 1900s date.  The same is true of the weapon styles.

Weapons of Moroland shield plaques sell for between $15 and $30 depending on pizzazz and not quality.  The secondary market is flooded with them.  I was not able to find any similar or comparable items to Philippine War Relics display that you own.  Given the passage of time and lack of collector interest in this particular war, a fair secondary market value is between $50 and $75.  The difficulty will be trying to find someone who will pay it.

One final comment:  The cost of the shadow box frames will exceed the value of the items placed in them.

I have a taxidermy white tail deer head.  Each antler has four points.  It hangs directly on the wall.  There is no plaque at the end of the neck.  It is in very good condition.  I would like to sell it.  What is a reasonable asking price? – JH, Diamondale, MI, Email Question

They exist because the person who shot the deer wanted a trophy for his/her hunt.  They usually are not sold while the hunter is alive.  Once the hunter dies, the family wants to get rid of these trophies as soon as possible.  There are a few exceptions, albeit very few.

More often than not, they are bought for the antlers.  Deer antlers, known as sheds, are very popular.  Artisans and crafts people use the antlers to make craft products from chandeliers to wine racks, furniture, and jewelry.

Those who hunt antlers in the wild assign three grades.  Grade A (1) are fresh shed antlers.  Grade B (2) antlers are in good condition without chalkiness and often slightly weathered or dull.  They are known as “Hard Whites.”  Grade C (3) have been on the ground for a while and are broken, weathered, and white.  They are used for dog chews and jewelry.  Using these criteria, the antlers on a white tail deer mount would be classified as Grade B.

Purchasing and selling deadheads, mounts, or shed antlers is legal in most states.  The key is that the antlers were acquired legally.  In a few instances, states forbid the sale of antlers found on public lands.  There are nuances in the laws.  Oklahoma prohibits the sale of mounts and antlers.  Hence, check your state laws before proceeding with the sale.

Your whitetail shoulder mount will most likely be bought by someone who wants to sell the antlers, use it for display in a business environment such as a bar or restaurant, or a non-hunter who wants to display it for the purpose of convincing friends and others that he/she is actually a hunter.  The mount is common as opposed to a monster mount.  Eight point is better than six points or less.  It is not as impressive as larger mounts where the number of points and shape of the antlers are larger.

Whitetail deer head mounts similar to the one you own sell at auction between $35.00 and $50.  Buyers tend to be dealers who are interested in selling the antlers for repurposing or the mount for decorative purposes.  If the mount is taken to a shop or show and placed on display, the asking price will range from $100 to $150.  Craigslist is one selling possibility.  Spreading the word that you want to sell the mount is another.  I was going to suggest taking any offer over $100.  Then, I remembered you wanted to sell it, which I assume means getting rid of it as quickly as possible.  My recommendation is to take any offer of $50 or higher.  You have the money.  The taxidermy deer head is then the new owner’s problem.

I purchased an Auto-Wheel Coaster child’s wagon for $85 at a local antiques shop.  I sanded it down and varnished the wood.  I plan to use it as a coffee table in my sun room.  I would like to know how old it is and who made it.  I know I hurt its value by sanding and varnishing it. – PM, Email Question.

In 1905, John J. Schneider and Henry J. Tiedt organized the Buffalo Sled Company.  The company moved to North Towanda, New York, in 1909.  The company initially made sleds and shovels.  Coasters (wagons) were added in 1912.  The wagons were aggressively marketed through advertisements in magazines, club promotions, and giveaways.  The company became the Auto Wheel Coaster Company.  In the 1930s, Auto Coaster was one of the largest producers of wooden wagons.  The company went into bankruptcy in July 1964.  After being bought by local business interests, it continued to struggle.  The North Towanda factory burned down on May 29, 1972.  The factory was in the process of being converted to a palette factory when the fire occurred.

The wheels used on your wagon suggest a construction date between the mid-1920s to the 1930s.  I found one listing on WorthPoint.com that describes the wheels as “artillery wheels,” whatever that means.  I was unable to find a second source to substantiate this claim.

The $85 you paid for a wagon that needed refinishing seems high to me.  Instead of hurting the secondary market retail value, your sanding and varnishing helped it.  The wagon is now room ready, usable with no additional work required.  You did a good job preserving the markings, again a value-added plus.

Since you plan to use the wagon in a sun room, you need to check it several times a year to make certain the sun is not drying out the wood or fading the finish.  As long as you prevent sunlight from hitting the wagon directly, it should be fine.