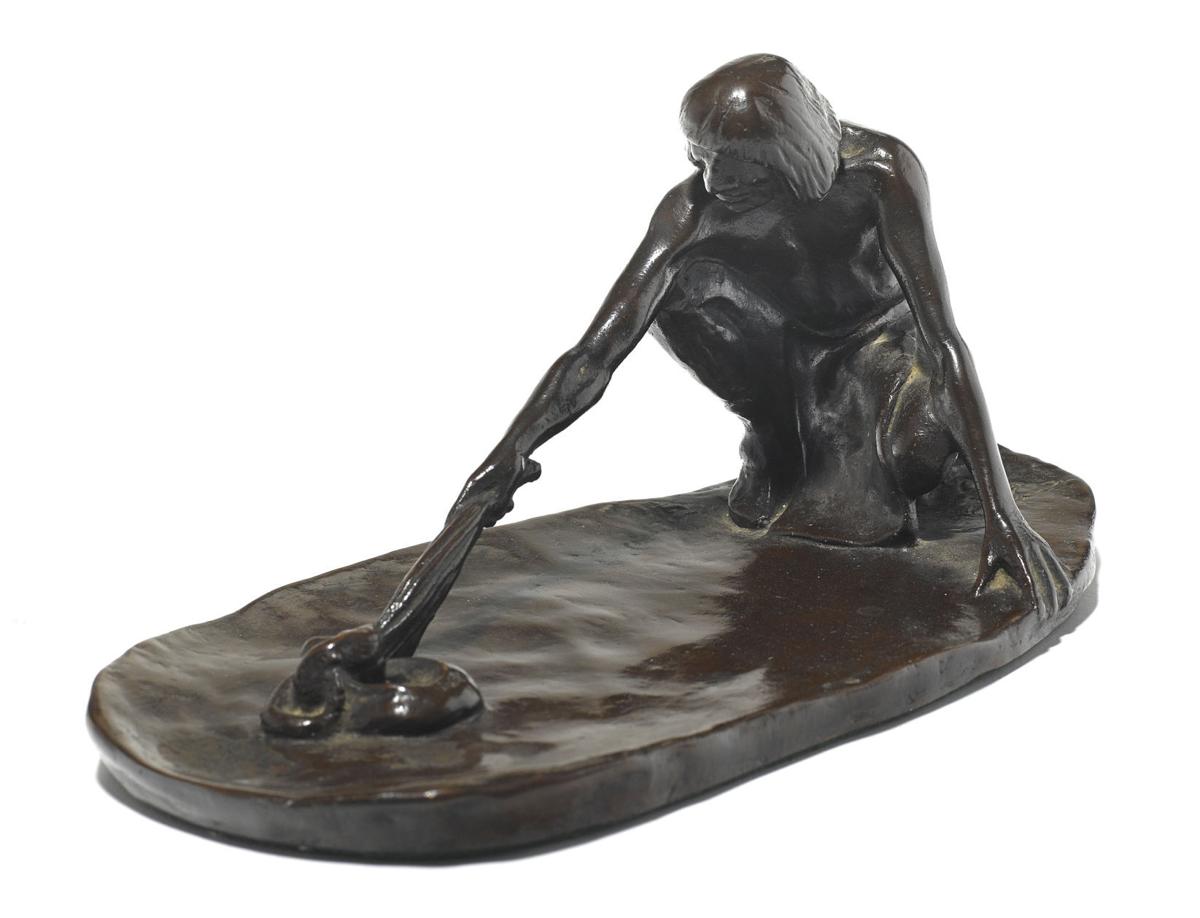 Bronze; The Snake Priest; inscribed CMR with skull insignia on base; modeled in 1914; 4 inches high; $5,100. Photo courtesy of Bonhams. 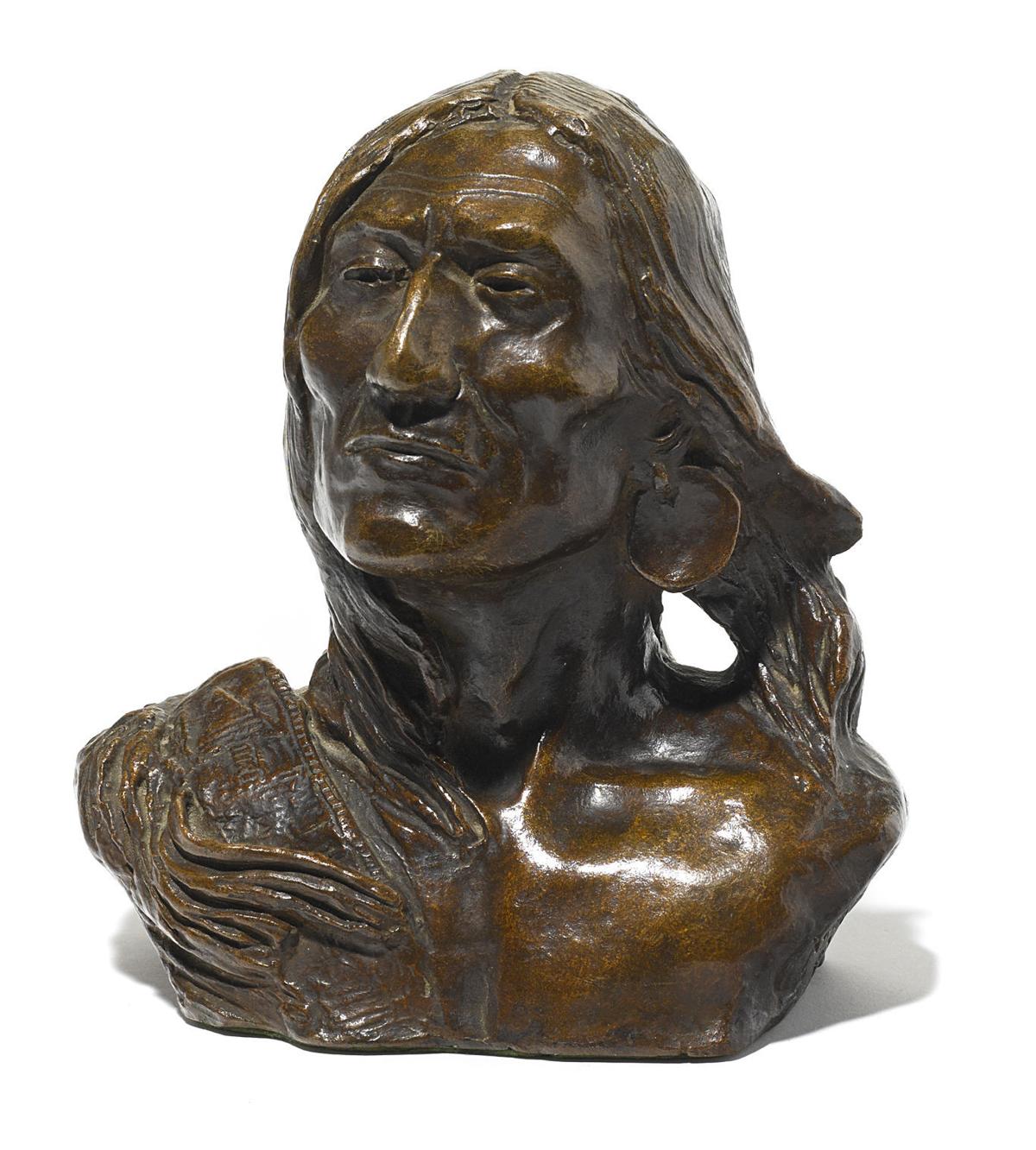 Bronze; The Snake Priest; inscribed CMR with skull insignia on base; modeled in 1914; 4 inches high; $5,100. Photo courtesy of Bonhams.

Most writers describe the passing of the “Old West” from a distance but Charles was right there capturing it all firsthand with his pen and brush.

Charles M. Russell spent much of his life riding the range, herding cattle, hunting, trapping, and painting the life of the Old West.

He was also a gifted 19th century storyteller. Friends said he would paint them a picture, include a letter with his artwork and they would end up appreciating the letter more than the picture.

With words Charles was funny, wise and eloquent without being preachy. People said he seemed to walk on higher ground. His attitude in life was one of live and let live and friends said they were all the better for having known him.

“Laughs and good judgment have saved me many a black eye, but I don’t laugh at other’s tears,” he said. “My friends are mixed—preachers, priests and sinners. I belong to no church, but am friendly toward and respect all of them.”

Most writers describe the passing of the “Old West” from a distance but Charles was right there capturing it all firsthand with his pen and brush. He lived in the West, mostly Montana, for 44 years.

Often compared to storyteller Will Rogers his tales began around the campfire then moved onto paper where they managed to capture the flavor and emotions of “everyman”.

His stories like those of Mark Twain had lots of humor and not only educated his listeners but also helped Russell sell his own artwork. Writing didn’t fetch the kind of money his art did but a big part of his legacy was his uncanny ability to record the cultural history of the American West.

When Charles spoke and wrote people listened. Most of his stories were about the rapid change in western America at the turn of the 19th century. His storytelling began early. As a kid growing up in St. Louis, he was a mimic often seeing things in a funny way with an innate ability to make people laugh.

Along with his stories, he painted more than 2,000 paintings of landscapes, cowboys and Indians plus sculptures set in the Western U.S. and Canada. By the early-1920s a single small Russell painting could fetch over $10,000.

His paintings of Native American war parties, buffalo hunts, and clashing cowboys brought the West alive for those who would never get to experience it firsthand.

Friends said Charles was curious, always wanting to know about how things worked. His firsthand knowledge informed his writings making them all the more realistic

“Colorful tales those paintings tell, and one marvels that their creator should show them with a half-apologetic air of nonchalance—he really doesn’t sense their fineness because of him the canvas, the brushes and the pigments are just a way to express feelings he cannot put into words,” said newspaper writer Frederick Richardson.

Many of his peers ignored stories about how the demise of the buffalo in the early-1880s brought famine to the northern plain’s natives. Charles did not. He probed people to pay attention to the Natives ongoing plight in the face of a harsh reality.

On Feb. 26, 2021, Bonhams featured the sculpture of Charles M. Russell on the block. Here are some current values.