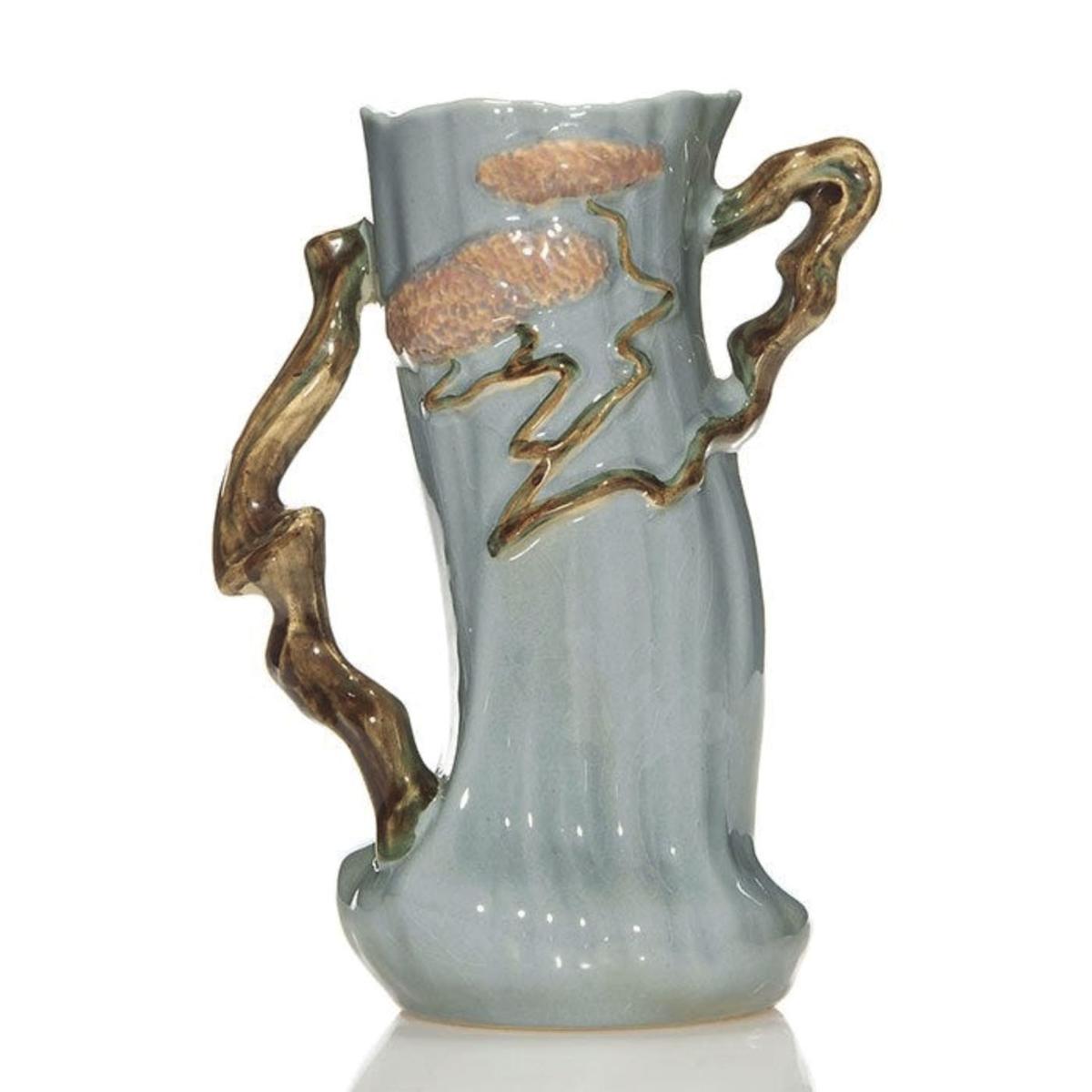 Photo Caption: Each of these Ming Tree vases sold separately at a Humler & Nolan auction. The blue gray vase sold for $489, the light blue vase for $431, and the turquoise blue vase for $401. 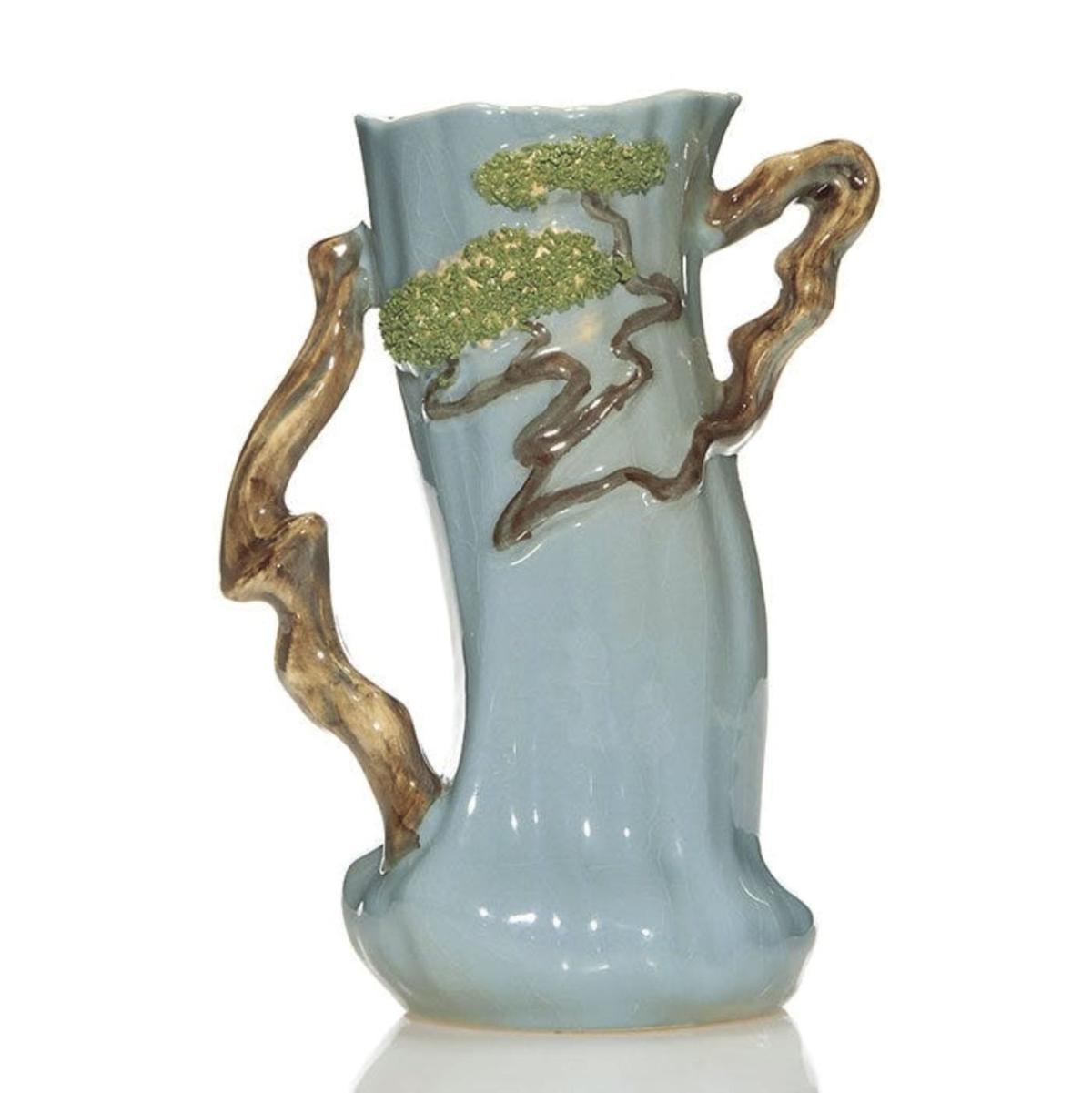 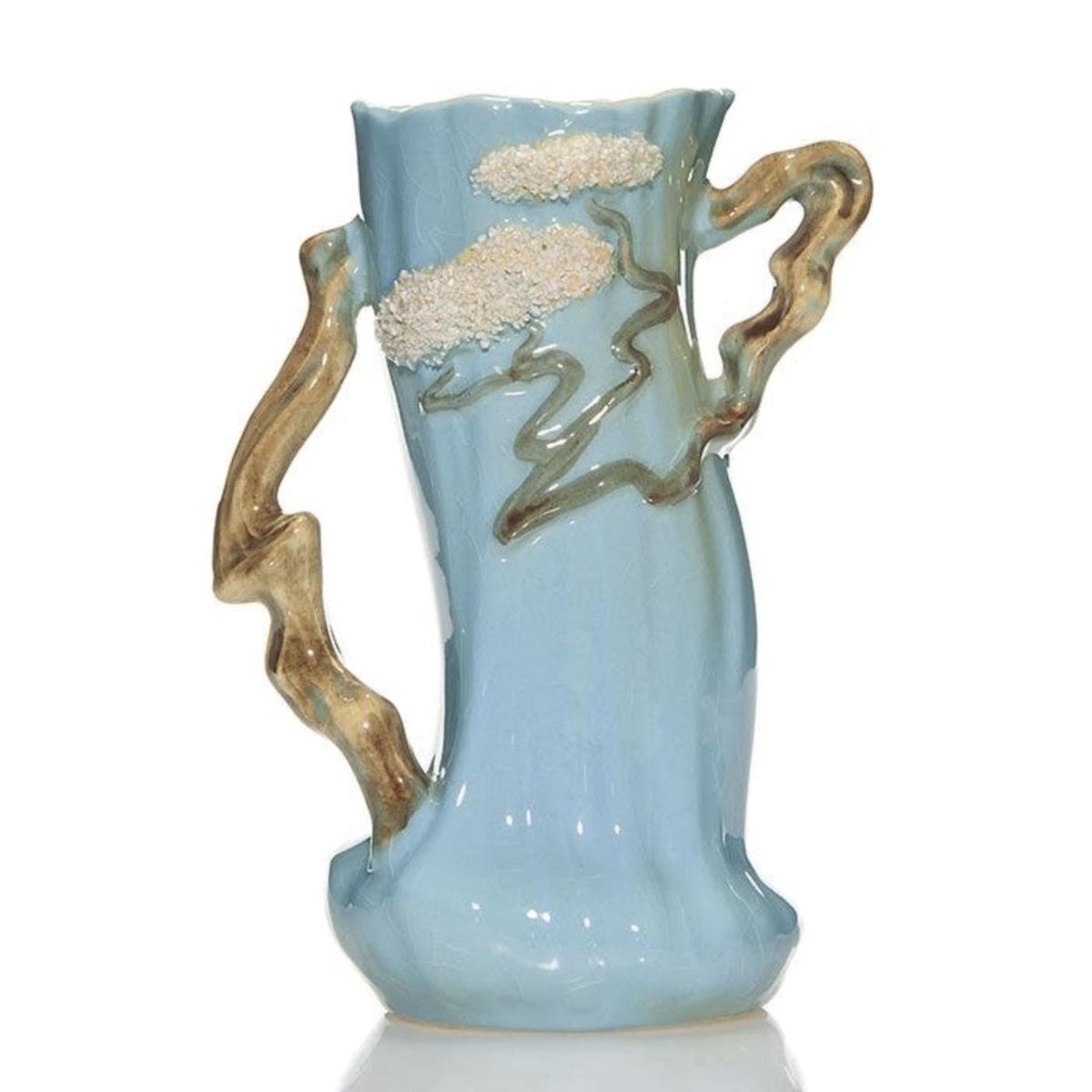 Photo Caption: Each of these Ming Tree vases sold separately at a Humler & Nolan auction. The blue gray vase sold for $489, the light blue vase for $431, and the turquoise blue vase for $401.

Art pottery is made by a single talented artist, a group of designers and artists who share the different steps, or a large company that has expensive machinery, men who make the molds, throw the clay and manage the hot ovens, and many talented designers and artists. Trial pieces are made that are eventually destroyed or sold after the final design has been determined.

In 2016, an auction at Humler & Nolan, a now-closed Cincinnati auction gallery, sold three very modern looking vases. The three “Ming Tree” vases, introduced in 1949, were auctioned each with a different trial glaze color. The blue gray vase with yellow and pink coraline-like foliage sold for $489, the light blue vase with pink and green foliage for $431, and the turquoise blue vase with white and green foliage for $401. They are all marked with the words “ROSEVILLE U.S.A.” in printed letters. Was the price difference because the pale blue gray was most popular, because bidders preferred the colors of the coraline-like fragments, or because each bidder wanted only one vase and the winner didn’t continue bidding?

Q: My late mother had a business in ephemera, and we inherited her relatively large collection of postcards. Some of them are signed by Philip Boileau and marked “Reinthal & Newman, Pubs., N.Y.” We’re interested in selling the collection in total or in pieces. Can you suggest the best way to go about this?

A: Philip Boileau (1863-1917) was an artist who opened a studio in New York City in 1902. He was known for his portraits of beautiful women. His work appeared on postcards, prints, magazines, calendars and other items. Reinthal & Newman was a publisher of postcards and prints, in business in New York from 1906 to 1928. Most postcards sell for 25 cents or less or in groups of 25 or 30 cards for less than $10. Only a few sell for high prices. Since your mother was an ephemera dealer, she may have collected cards that are more valuable than most. Postcards with illustrations by Philip Boileau have sold recently for $1.50 to $6. Go to a postcard show and see what postcards like yours are selling for. Talk to the dealers and see if they’re interested in your collection. But don’t let them just pick out the best postcards and leave you with the rest, which will be harder to sell. You can find postcard shows by searching online.

Q: I have about 25 Nancy Drew mystery books that I got in the 1960s. They aren’t in the best shape, but I was wondering if they are popular collectibles. I’ve seen them along with the Hardy Boys in a lot of thrift stores.

A: Amateur sleuth Nancy Drew, along with her companions — “tomboy George” and “plump Beth” — started solving crimes in 1930 in the “Secret of the Old Clock.” The books are still popular. They were created by publisher Edward Stratemeyer as the female counterpart to his Hardy Boys series. They were ghostwritten by several authors under the pseudonym Carolyn Keene. Vintage Nancy Drew books cost $8 to $10 each in thrift stores and can still be bought new in bookstores.

Q: We bought an antique telephone and would like to know something about it. It’s engraved “1872 Edwards” in a triangle. We thought it was interesting but wonder if it has any value.

A: Robert Edwards and David Rousseau started Edwards and Company in 1872. The company made igniters for gas fixtures and later made burglar alarms and electric doorbells. Alexander Graham Bell was granted the first patent for a telephone in 1876. The first telephones for private homes were made in 1877. Edwards and Company made telephone call boxes, intercoms and signaling equipment, but we haven’t seen any Edwards telephones. You may have a call box or intercom phone that was attached to the wall and used to call servants. Edwards is now a brand owned by Carrier and makes fire alarm and hazard detection equipment. The value of your telephone intercom is low, under $50.

Q: I have a tote box full of J. & G. Meakin dinnerware. The pattern is Alpine Mist, white with blue flowers. I haven’t seen any of it in antiques stores or flea markets. I’d like to find out about the maker and if it’s valuable.

A: J. & G. Meakin was founded by brothers James and George Meakin in 1851. Much of the company’s pottery was made in England for export to the U.S. and other countries. The pottery was run by family members until 1958. It became part of the Wedgwood Group in 1970, and production stopped in 2000. A five-piece place setting of Meakin’s Alpine Mist was offered for sale for $25 online, dinner plates for $12 to $14 each, and a vegetable bowl for $18. It’s hard to sell large sets of dinnerware. You can try a local consignment shop to see if they can sell them, or donate the dishes to a charity and take the tax deduction.

Terry and Kim Kovel answer readers’ questions sent to the column. Send a letter with one question describing the size, material (glass, pottery) and what you know about the item. Include only two pictures, the object and a close-up of any marks or damage. Be sure your name and return address are included. By sending a question, you give full permission for use in any Kovel product. Names, addresses or email addresses will not be published. We do not guarantee the return of photographs, but if a stamped envelope is included, we will try. Questions that are answered will appear in Kovels Publications. Write to Kovels, (Collectors Journal), King Features Syndicate, 628 Virginia Dr., Orlando, FL 32803 or email us at collectorsgallery@kovels.com. Wise investors and people who just love designer handbags are discovering the handbag market is hotter than ever. Now is the time to learn how to spot the $1,000-plus bags that are found regularly for huge bargains at garage sales and thrift stores! Build your collection while prices of undiscovered brands are low. This report includes makers’ information, trademarks, information on fakes, and care of over 75 brands. Plus, a FREE supplement with current prices. Special Report, 8 1/2 by 5 1/2 inches, 46 pp. Available only from Kovels for $19.95 plus $4.95 postage and handling. Order by phone at 800-303-1996; online at Kovels.com; or mail payment to Kovels, Box 22900, Beachwood, OH 44122.