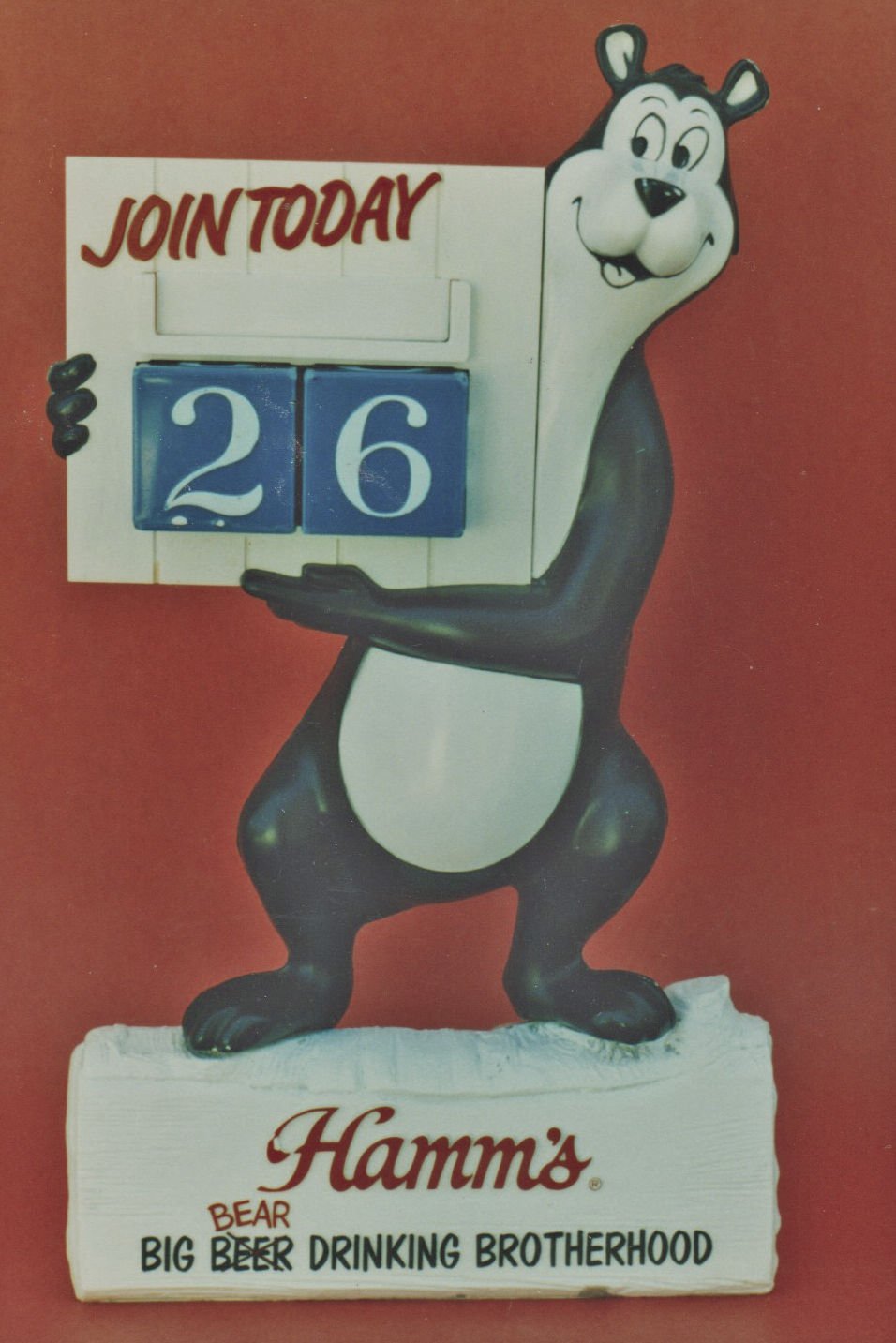 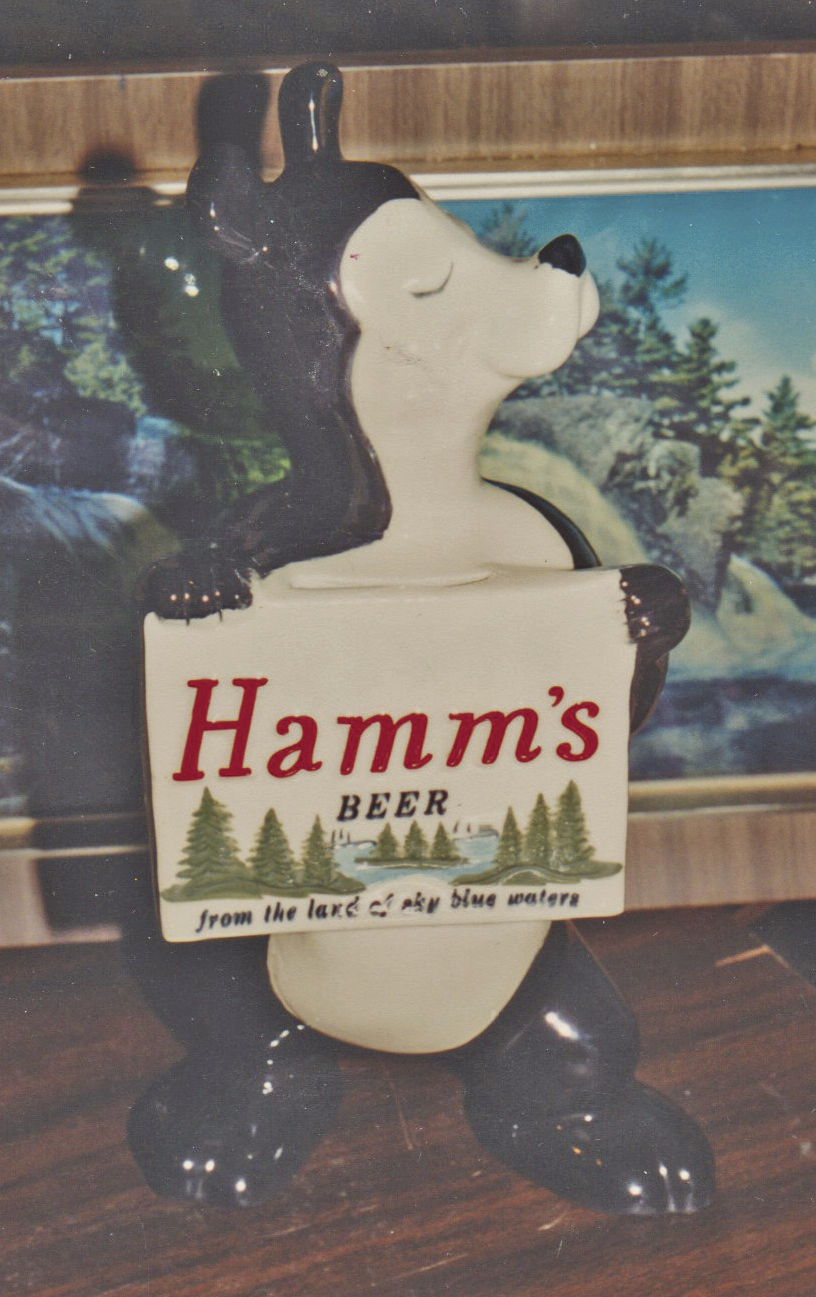 The Hamm’s Beer Bear bank made by Red Wing Pottery Company in 1961  is 12-inches tall. Photograph by Mary Jane Lamphier .

The Hamm’s Beer Bear bank made by Red Wing Pottery Company in 1961  is 12-inches tall. Photograph by Mary Jane Lamphier .

The older generation remembers the Hamm’s Beer Bear wearing many hats. He was often with his forest friends in colorful commercials and magazine ads, playing hockey or baseball or fishing in the lakes, accompanied with logos such as “Hamm’s is the catch of the Day.”

In the 1990s,”The Bungee Bear Strikes Again.” In  one of the advertisements, a slimmer Hamm’s Beer Bear, is bungee jumping from the Golden Gate bridge …a rope around one foot and two six packs in his paws.

During the 1950s and 1960s, while the Hamm’s Brewery was still in business, many promotional bears were used in marketing. The dimensional pieces are highly collectible

The dimensional pieces are highly collectible. One enormous Hamm’s Beer Bear, made of Styrofoam and standing five- foot tall was used in store displays. The Hamm’s Beer Bear holds a six-pack of Hamm’s Beer shoulder high. I saw one at the Gold Rush in Rochester Minnesota one time. It was tagged for $900. (I do not know if it ever sold.)

In the 1950-60s, a 15-inch calendar, featuring the Hamm’s Beer Bear, a black bear with white face and stomach is standing on a white block advertising Hamm’s Beer.  He holds a receptacle that has two blue blocks with the date of the month on them. This Hamm’s Beer Bear is made of plastic.  It was on EBAY today with six bids. There are two days left to bid and the last bid is $90.20 plus $12.80 for postage.

From the very beginning of Red Wing pottery history, a company that changed names several times, made clay jugs, crocks, bowls, banks, and other items with names  of companies, products  and the pottery company name on them. The Red Wing Pottery Company started in 1878, under the name of Red Wing Stoneware Company. It was located in Red Wing, Minnesota, in “The land of sky blue waters,” as the Sioux Indians called it. That area of Minnesota was also the land of perfect clay to make pottery.

The Red Wing Pottery Company made a number of signs and ashtrays, advertising Red Wing products and in the 1950s the Hamm’s Brewing Company commissioned Red Wing Potteries to produce several different advertising pieces for their company. The brewery asked for a limited addition of Red Wing dinnerware. The large hand painted  salad bowl  is a wonderful example of Red Wing art with a beautiful Minnesota lake surrounded with evergreens painted on the inside of the bowl.

One of the Hamm’s Beer Bear collectibles is the “Red Wing” bank.  Thousands of banks were made by the Red Wing Pottery Company before they closed in 1967. The bank is made in the likeness of the Hamm’s Beer Bear logo. It’s a typical cartoon type black bear, often used in the Hamm’s Brewery advertising. His nose is in the air and the bear holds a sign that reads, “Hamm’s BEER from the sky blue waters.”

There are pages of a variety of Hamm’s Beer Bear collectibles on Internet auctions today and only a few mentioned in this short column. Anyone can spend hours on EBAY to see what is available. However, I did not find a Red Wing bank today.