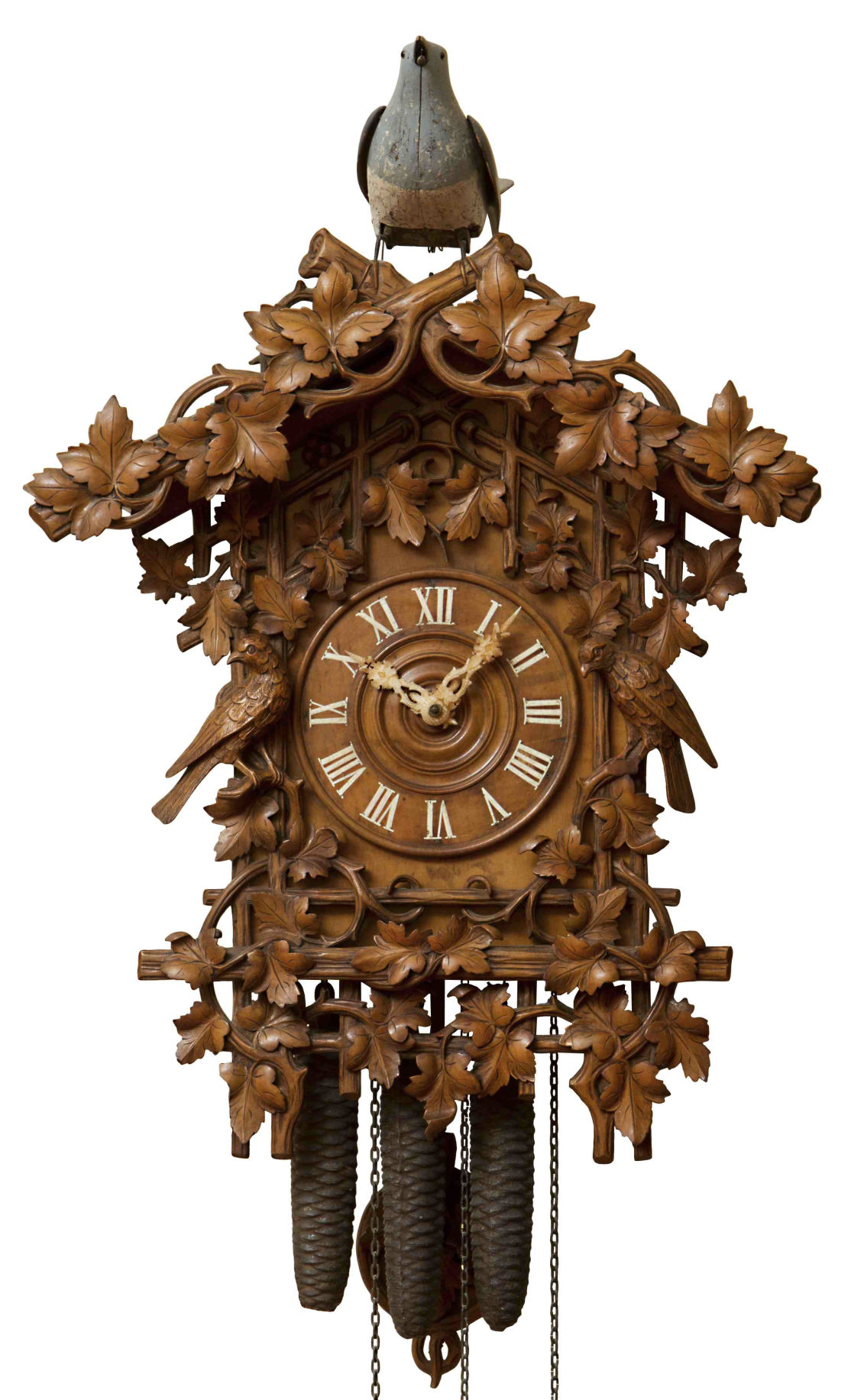 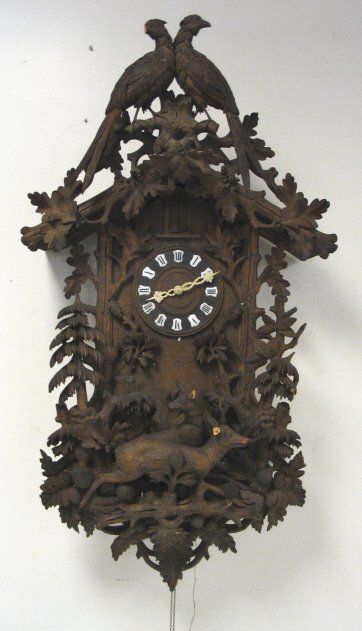 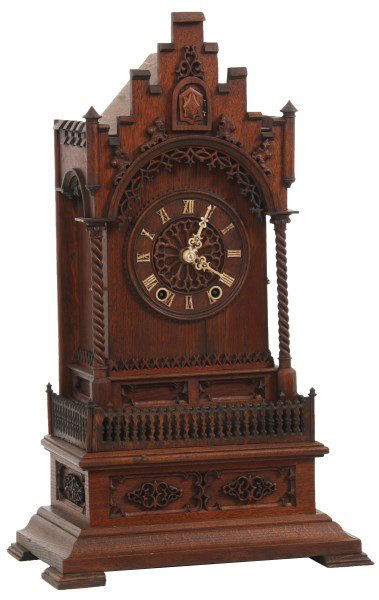 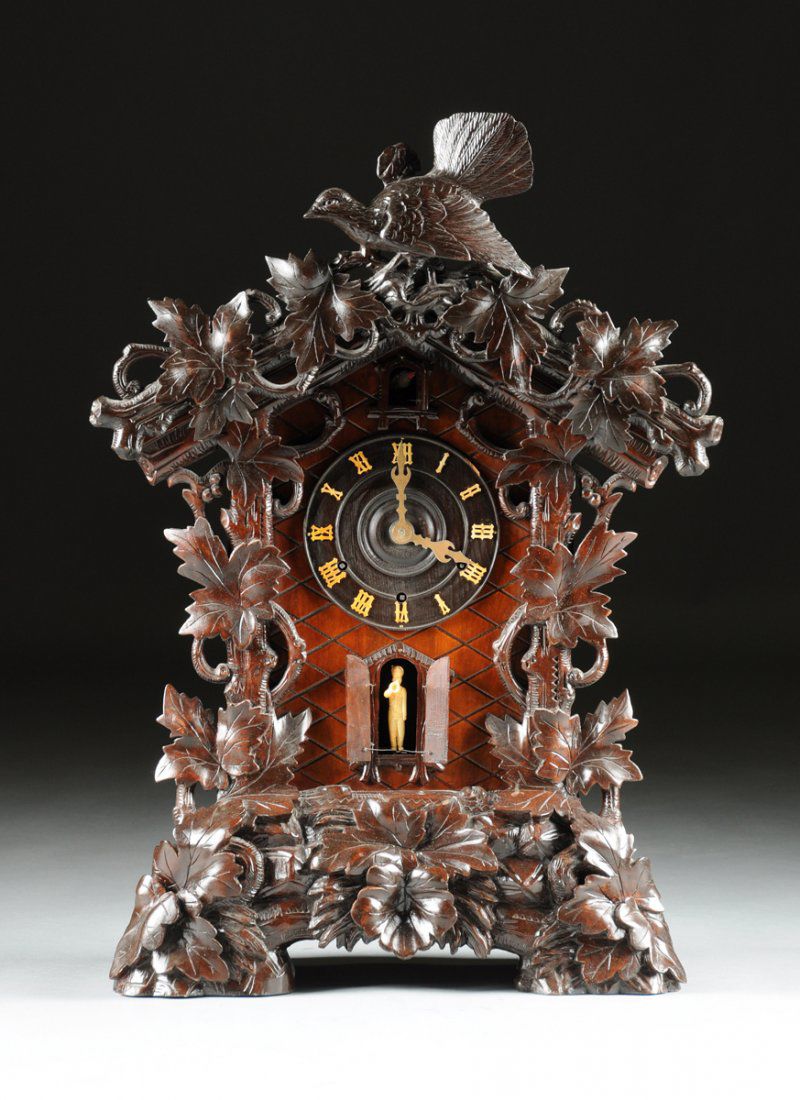 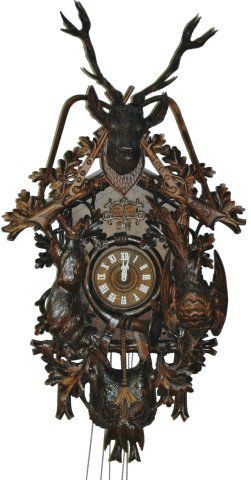 Beloved clocks originated in the Black Forest in Germany

Have you ever been in a house and seen a beautifully carved cuckoo clock, and then all of a sudden heard it chiming? Well, it’s a pretty common situation nowadays.

But did you ever wonder when and how those clocks first started?

It is generally regarded that cuckoo clocks as we know them today started in the Black Forest Region in Germany. More specifically, they were created around 1630 in the village of Triberg. The most-popular type of cuckoo clock was first designed in 1738 by Franz Ketterer. He was inspired by the local church organs, and his new system included small bellows and whistles that imitated a cuckoo’s call. His first model was an elaborately decorated painted wooden clock. The cuckoo was located behind a small door.

In traditional cuckoo clocks, the “coo coo” sound is derived from a system of bellows pushing air through two wooden whistles to recreate the distinctive two-note call of the common cuckoo. The gears of these traditional cuckoo clocks are regulated by a pendulum and system of two or three weights, traditionally shaped like pinecones that steadily drop over a period of one day or eight days, depending on the model of the clock. One weight, along with the pendulum, is dedicated to keeping the clock gears running while the other weight controls the avian automoton. Clocks that play music in addition to chirping will have a third weight.

The “railway house” cuckoo clock was made to look like a typical Black Forest structure with its pointed rood and square shape. The front of the clock would often be decorated with hand carved ivy leaves, flowers, or other wildlife scenes and the cuckoo bird would be hidden behind a trap door at the top, only to peek out at the top of the hour. It was meant to mimic the railway houses that stood at each German railway stop.

The cuckoo clock gained incredible popularity within Germany, enough for many people in the Black Forest to try their hand at clock making. During those long winter months, the farms would be snowed-in and the people had time to create finely hand-crafted clocks of many styles with rich and various carvings. People would even compete against each other for the best clock. Each of them would try to create more unique and detailed cuckoo clock than their neighbor’s clock. Clock-peddlers began traveling to different areas of Germany, as well as to France and elsewhere to sell their clocks. The cuckoo’s call became well-known throughout Europe, and actually was made the same way it is today, nearly 300 years later. Similar to church-organs, the sound was made by two bellows sending air through pipes.

By 1808, there were already a few hundred clockmakers and clock-peddlers in the districts of Triberg and Neustadt. When Soring came around, they would take their cuckoo clocks to town and display them. They would sell their clocks to admirers.

The fame of the Black Forest for making cuckoo clocks has spread worldwide. In fact, the most valuable Black Forest clock is the “world-time-clock”, which was made in 1787, and is located today in the German clock museum in Furtwangen. Besides the cuckoo clocks, many other types of clocks were made in the Black Forest, from little models with spring movements, up to large clocks for the towers of churches.

Typically, the casing of a cuckoo clock is traditional and is usually in the shape of a rustic birdhouse or a chalet. Many of the clocks are decorated with animals, plants, leaves, and depict hunting scenes. Some are ornamented with typical Black Forest scenes, such as dancing couples in traditional dress moving to music, as well as a rotating mill wheel, or even a farmer chopping wood. A cuckoo bird often appears through a small trap door when the clock is striking, and then goes behind the door after the striking stops. Many of the clocks are run by weights, often in the shape of pinecones, underneath the clock. They needed to be pulled up once a day, or a week, or longer, depending on the model. Recently, battery powered cuckoo clocks have been developed, but do not have the same bellows and striking that have been associated with the clocks for 300 years.

In recent years, quartz battery-powered clocks have been made. As on the mechanical counterparts, the cuckoo bird emerges from its enclosure and moves up and down, but on the quartz timepieces it also flaps its wings and opens his beak while it sings. Instead of the call being reproduced by the traditional bellows, is a digital recording of a cuckoo calling in the wild. In musical quartz clocks, the hourly chime is followed by the replay of one of twelve popular melodies (one for each hour). Some musical quartz clocks also reproduce many of the popular automata found on mechanical musical clocks, such as beer drinkers, jumping deer, and even angry wives beating lazy husbands.

The cuckoo clock has survived to this day. It is still greatly in demand, and is a hand-carved work of art that can be treasured for decades. Today, the “railway house” cuckoo clock is the most popular Black Forest cuckoo clock being made today.

Collectors still cherish cuckoo clocks as well. Clocks are often auctioned, and prices can really run the gamut. For example, a 19th century Black Forest wall clock with a cuckoo door went for $750, while another carved wood cuckoo mantle clock from the early 20th century sold for $2500 at auction in 2014. Often, the taller the clock the pricier they are. For example, a large wall 40 inch fully-carved clock depicting a deer family went for $3500. Sometimes clocks are bought for the beauty and ornateness of the clock itself, rather than for the clock’s mechanism. As an example, in 2006 an elaborately carved antique walnut cuckoo clock with carving of birds and deer was auctioned. However, some pieces were missing, and the clock that was offered did not have any weights. Nonetheless, the clock was auctioned for $5,000.

Here are a few more recent auction results. A Monumental Black Forest Carved Cuckoo Clock sold for $4,000 in a 2014 Cowan’s Auction.  This clock is a Black Forest wall clock, ornately carved case, framed with vining oak leaves and acorns, having an eagle crest on it, and revealing a cuckoo bird and a male figure. Another Monumental antique carved Black Forest cuckoo clock, depicting a rabbit, pheasant, rifles, and a large stag head sold for $5,000. An 1863 Beha #09 Shelf Cuckoo Clock with carved gothic steeple style case with spiral turned columns was sold in a recent 2014 auction for $9,500. This clock was sold in excellent condition.

Cuckoo clocks are indeed cherished by many, due in fact for a few reasons. They not only are nostalgic, but also the product is very well-made. They remind people of how ornate and exquisite many items of the past were. Unfortunately many items are not built with the same craftsmanship today. That is why cuckoo clocks will continue to be a favorite around the world of collectors and non-collectors alike. They combine the best of the past with the necessities of today.