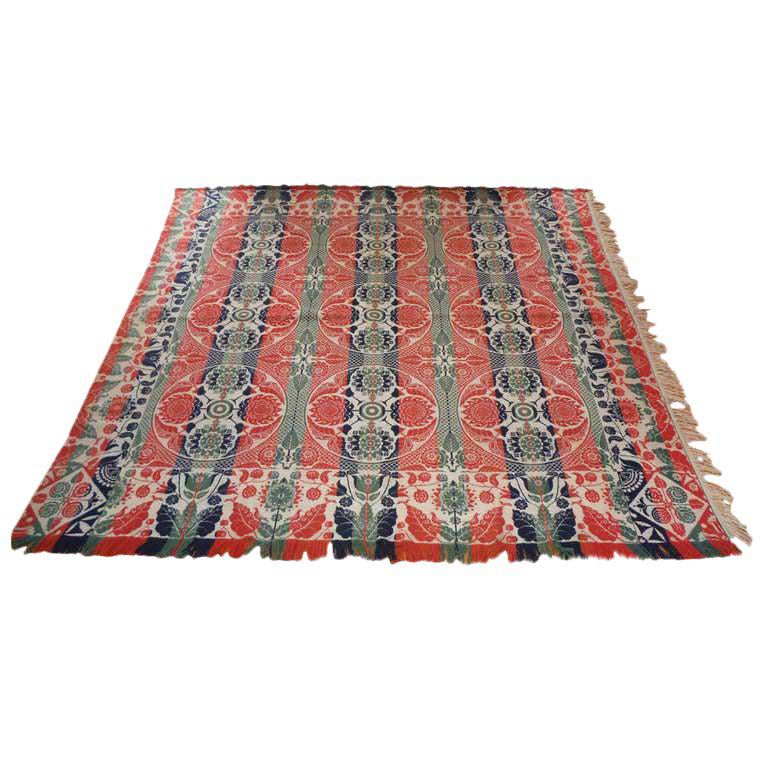 Old and vintage coverlets are popular with collectors

When coverlets come to market collectors may decide to hang them as wall decorations rather than use them as bed covers. There are many techniques that were used in America in the late 18th and 19th centuries. Part of their fascination is that many were signed and dated. Vintage examples are popular since the craft was revived beginning in the 1970s Bicentennial celebration. Prices for antique coverlets can be dealer-priced for over $7,000. Vintage examples can be tagged at several hundred dollars.

An example of how prices of antique coverlets have gone up is an 1844 coverlet that was priced on Antiques Road show in 2010 at $2,000 to $4,000. Today, dealer Laura Fisher has the coverlet priced at $6,250. What makes the coverlet special is not only is it signed, dated and red and white but has a border of George Washington on horseback but the words “united we stand, divided we fall,” and an overall pattern of the American eagle and shields.

Over the years many techniques were used. For example, A Linsey-Woolsey is a fabric made using two threads: one wool, the other linen. The result was a coarse fabric, heavy and large coverlet. The weaving of wool and linen was done in English and American Colonial homes before the Revolutionary War.

Woven coverlets of another type were made on looms in designs after the Colonial housewife had spun the wool. The colors were made by the housewife from various plants in her garden. An exception was indigo. It was desirable since the dark blue color didn’t fade.

Patterns for weaving were on paper that was handed down from family to family. Over the years new touches were added, till the original pattern had all but disappeared.

By the early 19th century much of the weaving was done by a traveling journeyman. The next development came when women ordered fabrics from professional weavers. They furnished them with their own yarn.

Most common were the geometric patterns done in a variety of colors. These “block” coverlets were made from 1820 to 1840s primarily by German of Scottish weavers.

There are several categories of hand woven coverlets. They are the overshot, summer-and-winter weave, block or double weave and Jacquard. The summer-winter weave was reversible. The weaver often included his name and a date in one corner. Jacquard with its many motifs from eagles to peacocks, with a makers mark and date are considered the finest examples.

Do you have an antique or collectible item and need more information?  For a personnel reply send a photo, along with history, size and any signature, with a self-addressed, stamped envelope and $25 to Anne Gilbert, 1811 Renaissance Commons Boulevard, #2-319, Boynton Beach, FL. 33426.