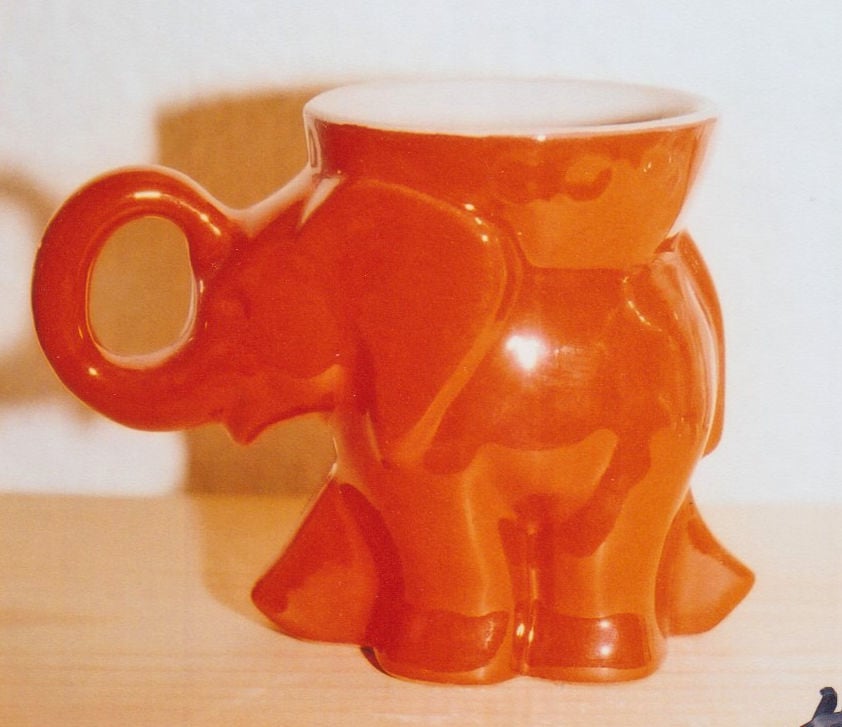 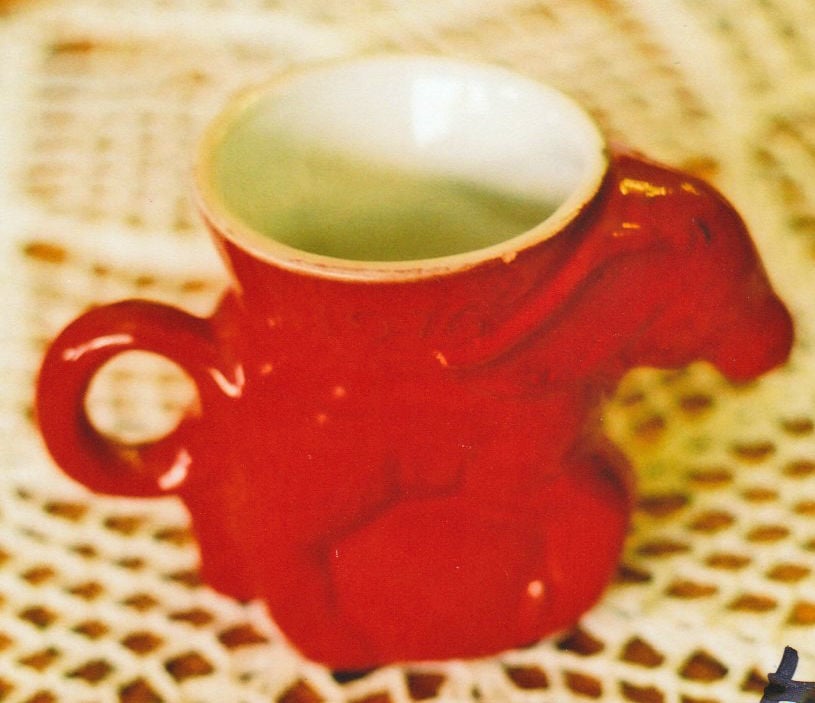 Now is the time to get out the Frankoma political mugs at my house. This happens every four years. I am not selective. I display both the Democratic and the Republican mugs.

The GOP elephant has big ears like any other elephant, however the elephant’s trunk curls up and is attached to the elephants head. It serves as a handle for the mug. Another comical aspect is the position of the legs. When the elephant faces to the right the legs spread out as if the animal is walking and when the animal is facing left the legs are straight and appear to be in a standing position.

The Frankoma DEM donkeys appear to have an attitude. Their ears are laid back and look ready to fight. A curled up tail serves as the handle for the mug. Like the elephant, when the donkey faces right the legs appear to be in action and when facing left the legs are straight and appear to be standing still. The question is, are the party animals coming or going? I do not know but the comical political mugs make me smile.

John Frank, the owner of Frankoma Pottery, was a Republican and he made the first GOP elephant mugs in 1968. They were well marked with “GOP” and the date molded into the clay at the top of the mug. Franks daughter, Joniece, took over the company in 1973. In 1975 she designed and made the democratic mugs. They were also well marked with “DEM” and the date molded into the top of the mug.

The Frankoma political mugs were produced in a variety of colors, brown, red, yellow, black and many more with imaginative names. For instance there are 15 different blues that include Morning Glory Blue, Country Blue, Robin Egg Blue, Peacock Blue, and Sky Blue.

Frankoma political mugs appear quite often in antique stores and flea markets. They are small, only about four-inches tall and collectors can overlook them. The elephant, unlike the namesake, can hide in small nooks and crannies and the donkey likewise.

I found a black 1985 DEM donkey mug in a tiny consignee’s corner, no bigger than four foot by four foot, crammed full of old dishes and bottles. A sign advertised, “EVERYTHING ONLY $1.” The mug was in good condition, no chips or cracks. It did not take me long to decide to get it. It was the bargain of the day.

Another place to find the Frankoma political mug is on www.ebay.com. Type “Frankoma political mugs” in the subject line and the search is shortened considerably. Prices range greatly. The 1968 GOP elephant mugs are priced from $25 to $35. The 1969 to 1974 mugs range from $15 to $ $25 — except for the 1974 Nixon and Ford mugs that can go for hundreds of dollars.