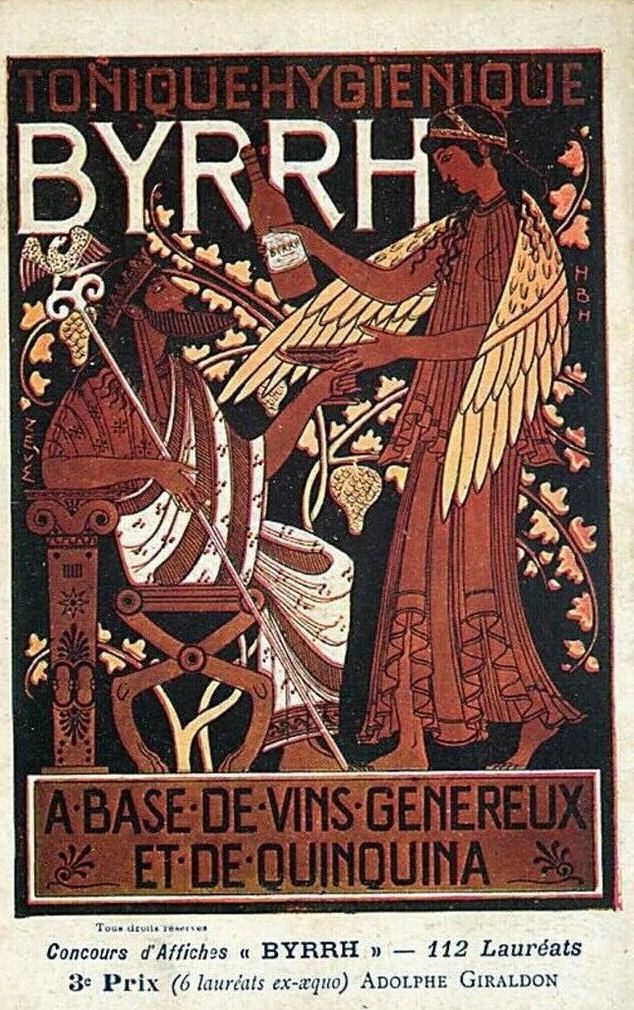 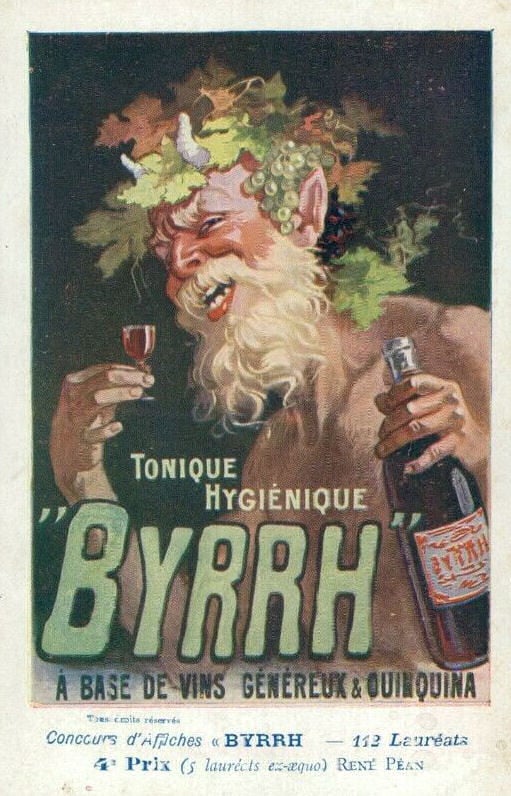 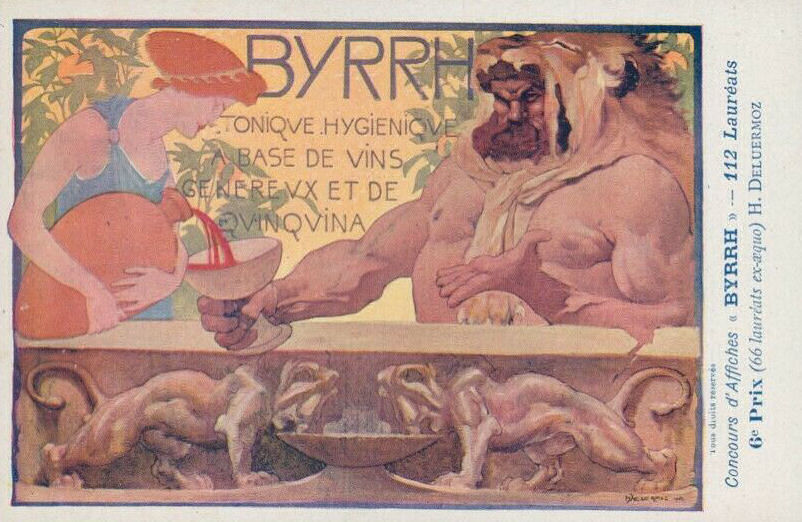 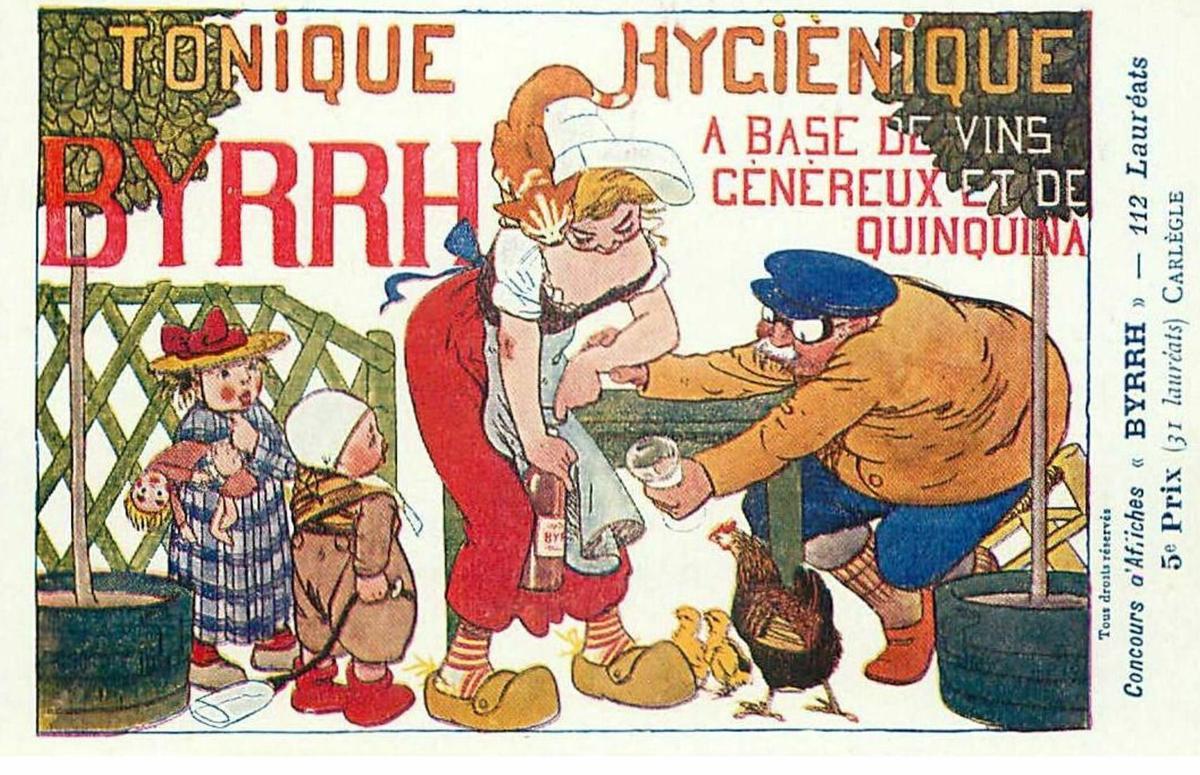 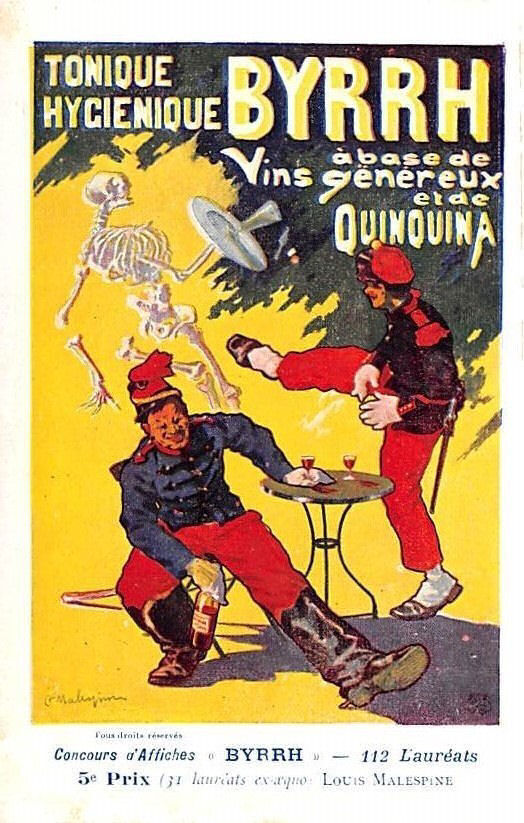 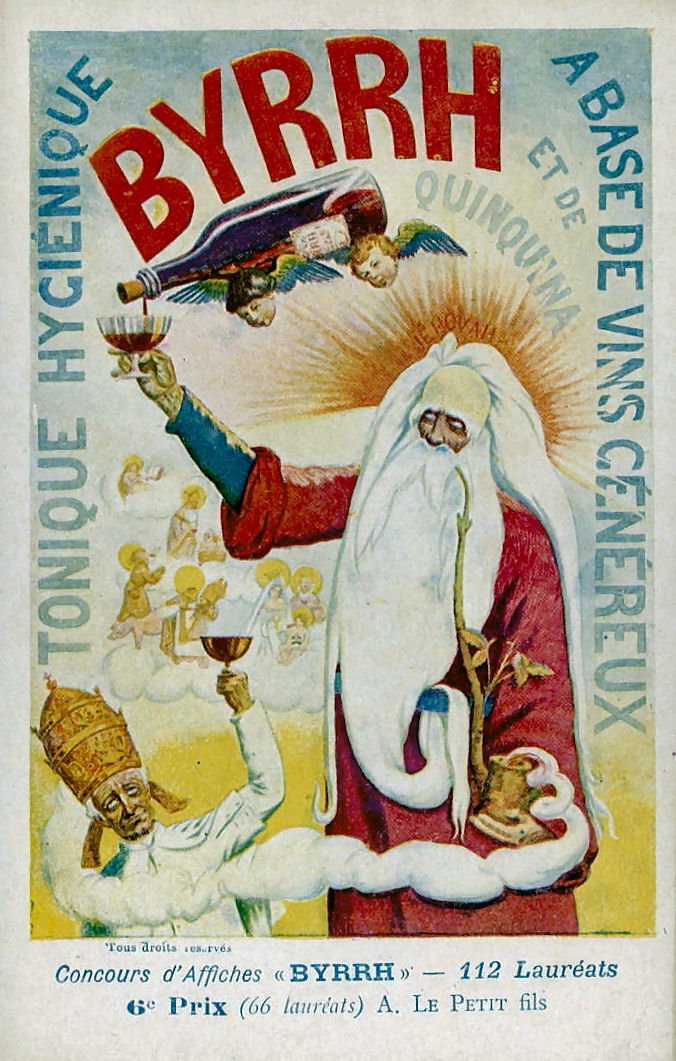 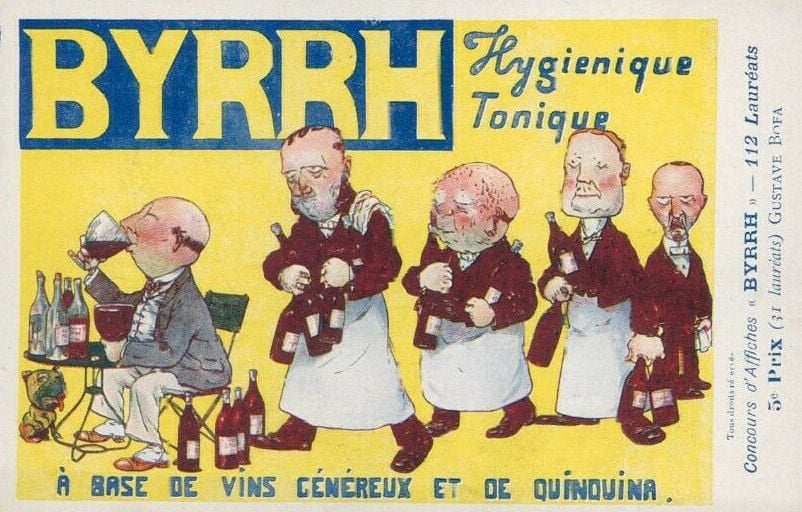 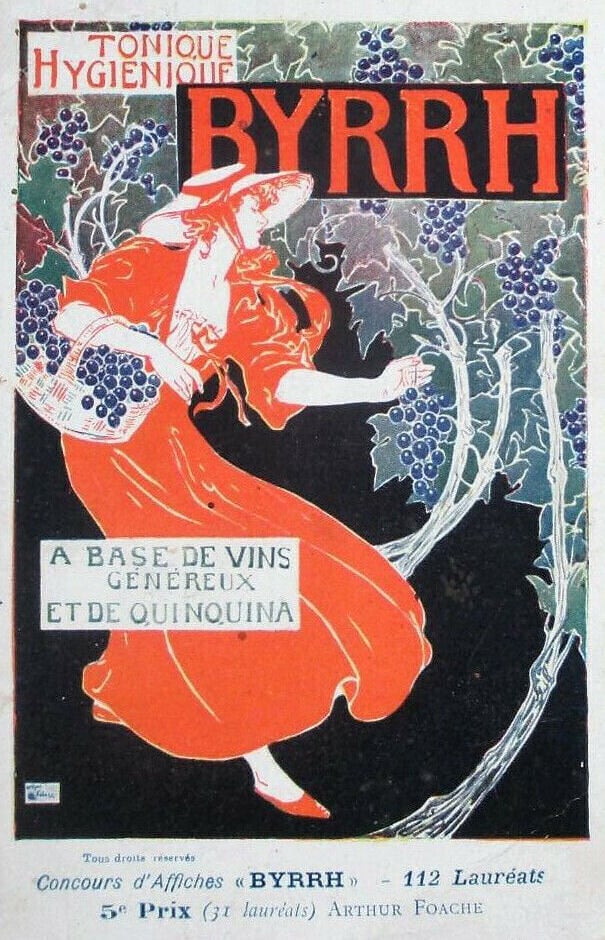 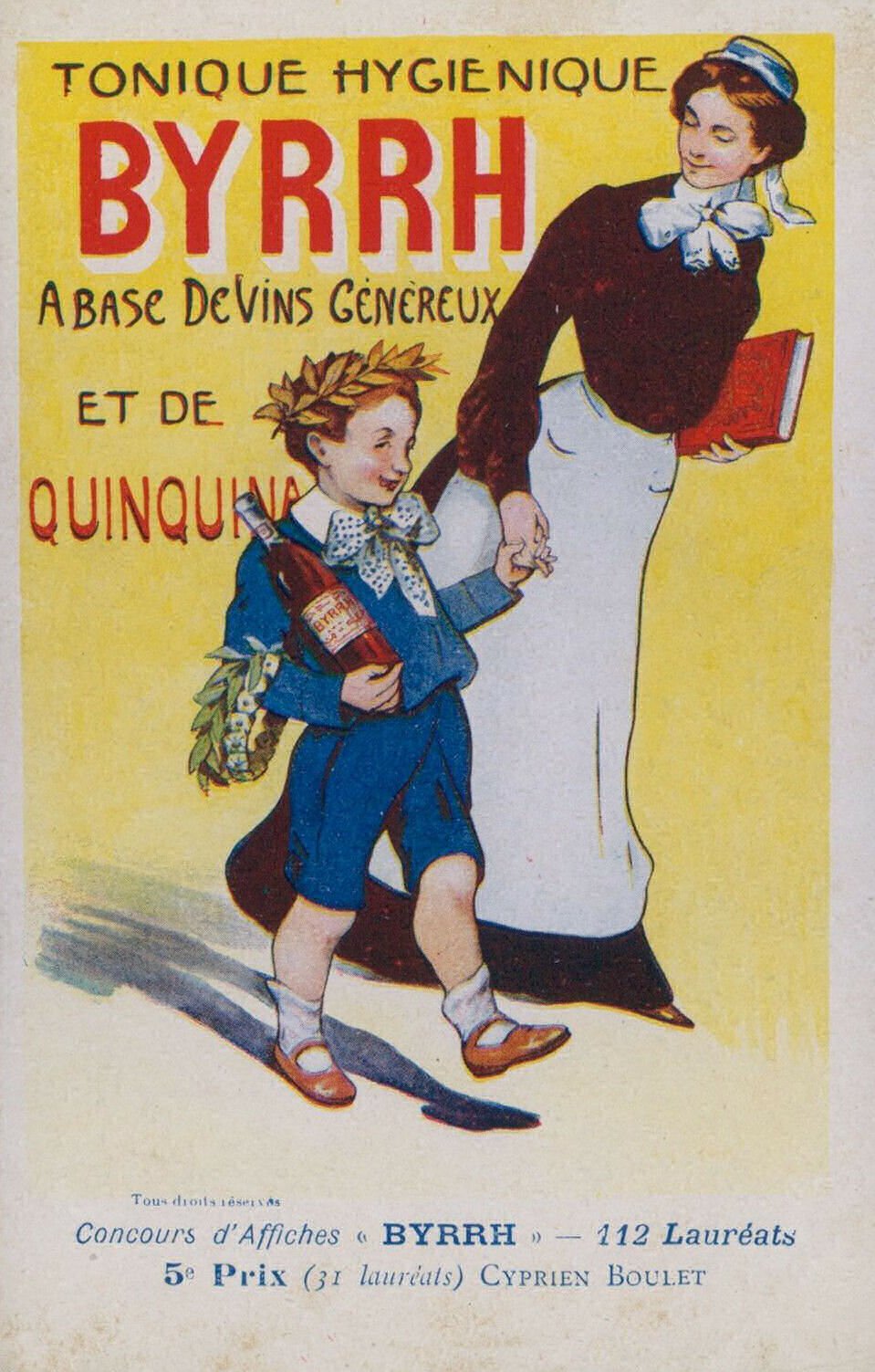 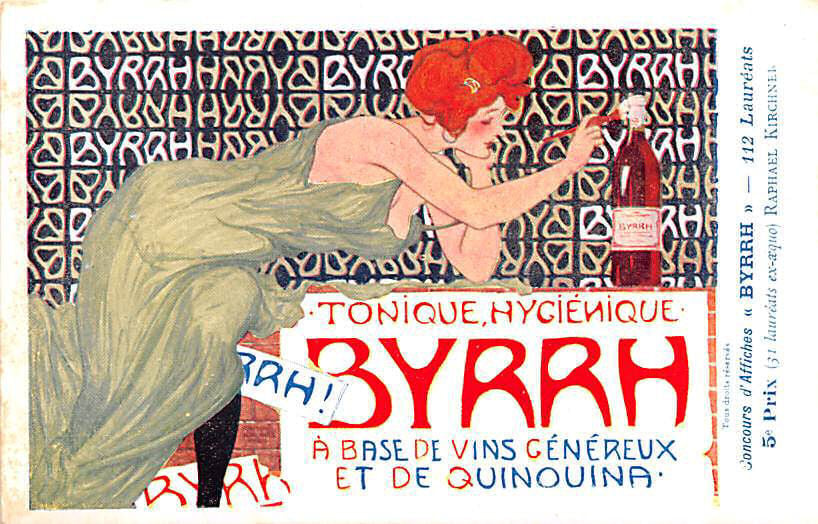 Byrrh Postcards: Part One gave a short history of the Byrrh winery and an introduction to the poster contest sponsored by Byrrh in 1903. These posters were commemorated in a set of 112 postcards published in 1906. Several the first and second place prize-winning designed were reviewed. In Byrrh Postcards: Part Two, several more prize-winning entries will be presented.

Figure #1, Figure #2 and Figure #3 show the poster art of Adolphe Giraldon, Rene Pean and Henri Deluermoz respectively. Giraldon, who won a third-place prize, Pean, who won a fourth-place prize, and Deluermoz, who won a sixth-place prize, all used Greek and Roman mythological images as themes for their posters. Imagine the time and talent that was required to execute these extraordinarily complex designs in reverse on the multiple lithographic stones from which the posters were then printed.

A slightly different approach was taken by Charles Emile Carlegie whose work is the subject of Figure #4. Carlegie was born in Switzerland, but as many artists did in the early 1900s, he moved to Paris to ply his trade. In his early years, Carlegie contributed drawings to many of the French satirical magazines. His humor certainly comes through in his fifth-place poster in which a young waitress in Dutch wooden shoes struggles to open a bottle of Byrrh for an anxious customer while two children and several chickens look on with amusement. In his later life, Carlegie produced many fine art lithographs which were used to illustrate books written by some of France’s best authors.

Figure #5 features the poster of Louis Malespine. At the time of the Byrrh competition, the aperitif absinthe was the subject of much controversy in France as well as in the rest of Europe. It’s supposed addictive properties made it a target of the temperance movement. On his poster, Malespine showed a soldier attacking the skeleton of death who is about to serve his fellow soldier a glass of absinthe (note the absinthe spoon and the sugar cube that have been dislodged from the serving tray). Naturally, both soldiers then proceed to have a glass of Byrrh instead. Actually, absinthe was no more addictive than was Byrrh, but then never let the facts get in the way of a good poster.

Figure #6 shows the postcard featuring one of the two winning posters created by the artist Alfred-Marie Le Petit. It is hard to believe that this poster was relegated to a sixth-place prize. After all, what other product besides Byrrh could boast the endorsement of both the Pope and Santa Clause on a single poster?

Most of the postcards in the Byrrh series represent posters that received fifth or sixth place prizes (97 out of 112 posters or 87%). However, some of my favorite cards are included in the fifth-place group. Three such cards are shown in Figure #7, Figure #8 and Figure #9, designed respectively by the artists Gustave Bofa, Arthur Foache and Cyprien Boulet.

Although the Byrrh Concours d’ Affiches is an extremely long series of postcards to collect, the prices of these cards have remained relatively reasonable, particularly if you can pick up the cards in Europe where many are priced at 50 Euros ($75) or less. There is one exception, and that exception is shown in Figure #10. The poster represented on this card was designed by the famous Austrian portrait painter and postcard illustrator, Raphael Kirchner. This card is the key card for the Byrrh series and normally sells for between $400 and $600 depending on condition. If you love art nouveau postcards, the Byrrh series ii something to keep in mind. Until next time, good health, and good hunting.