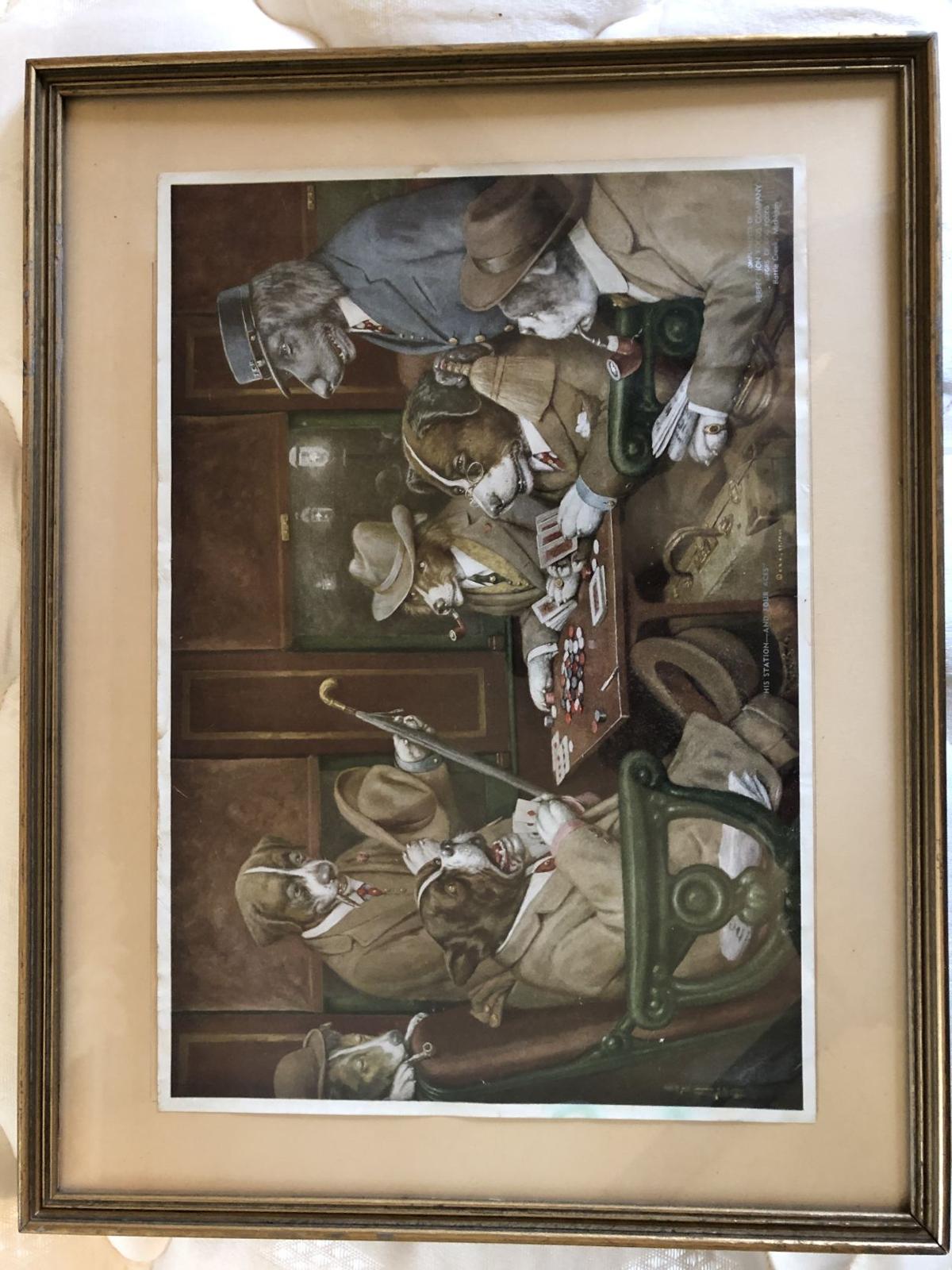 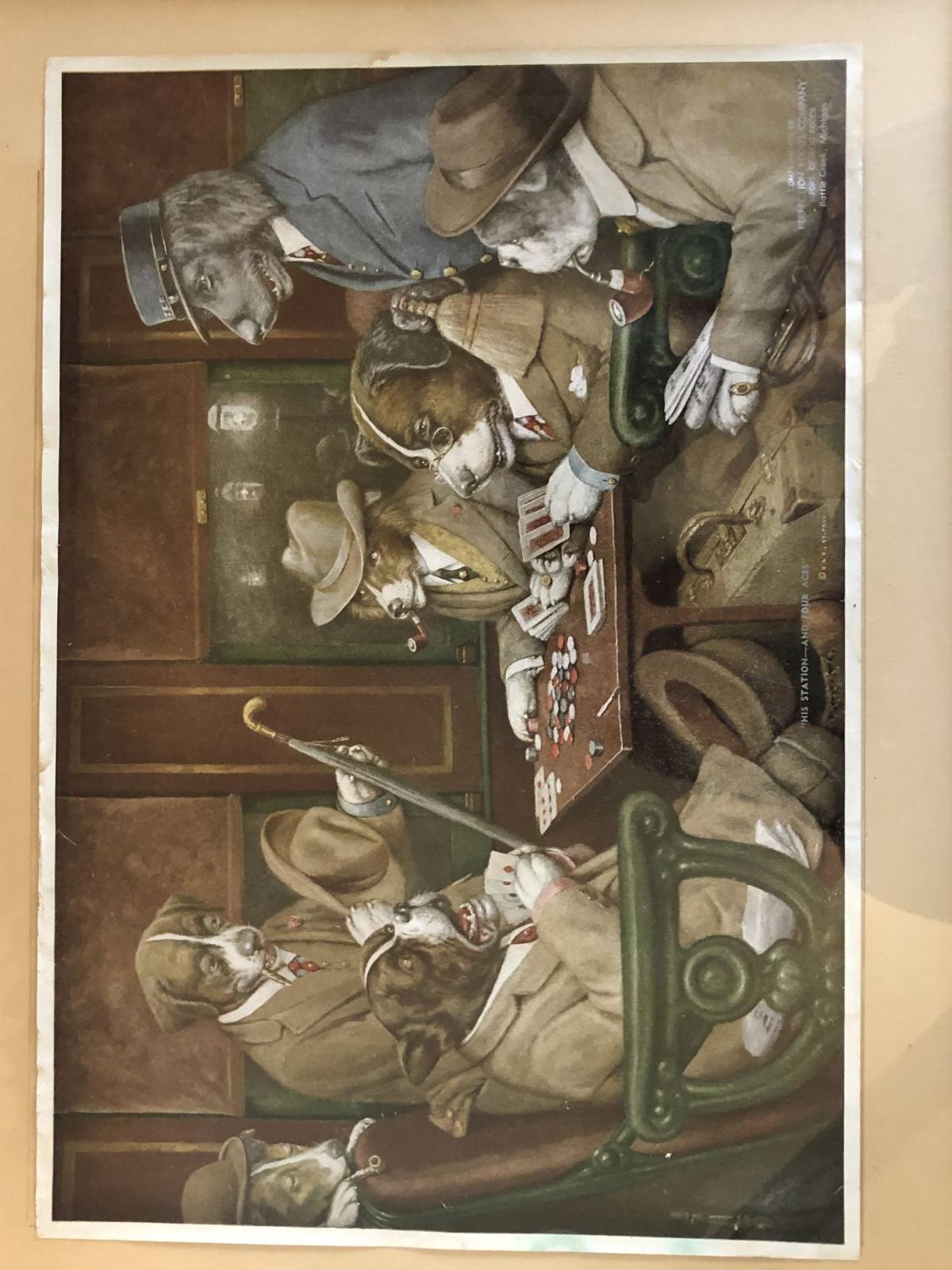 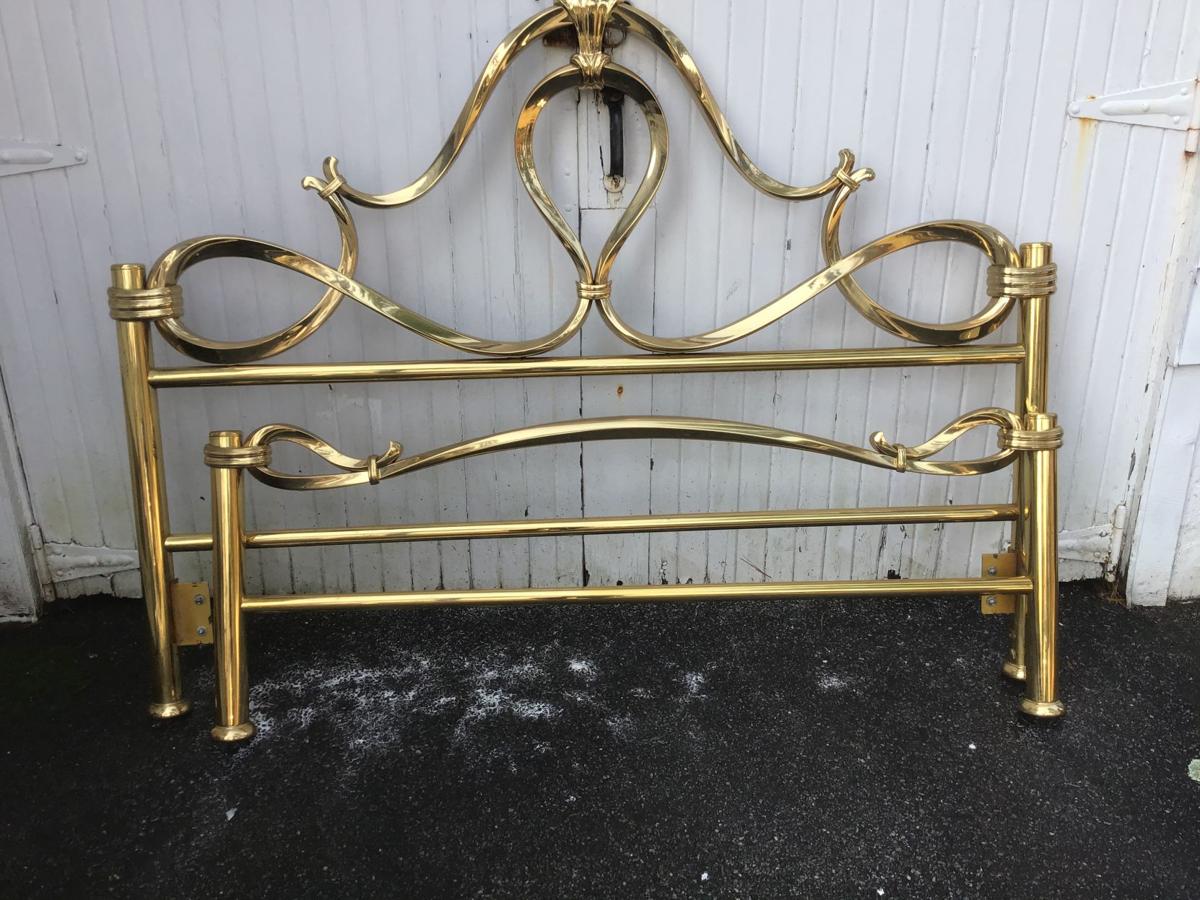 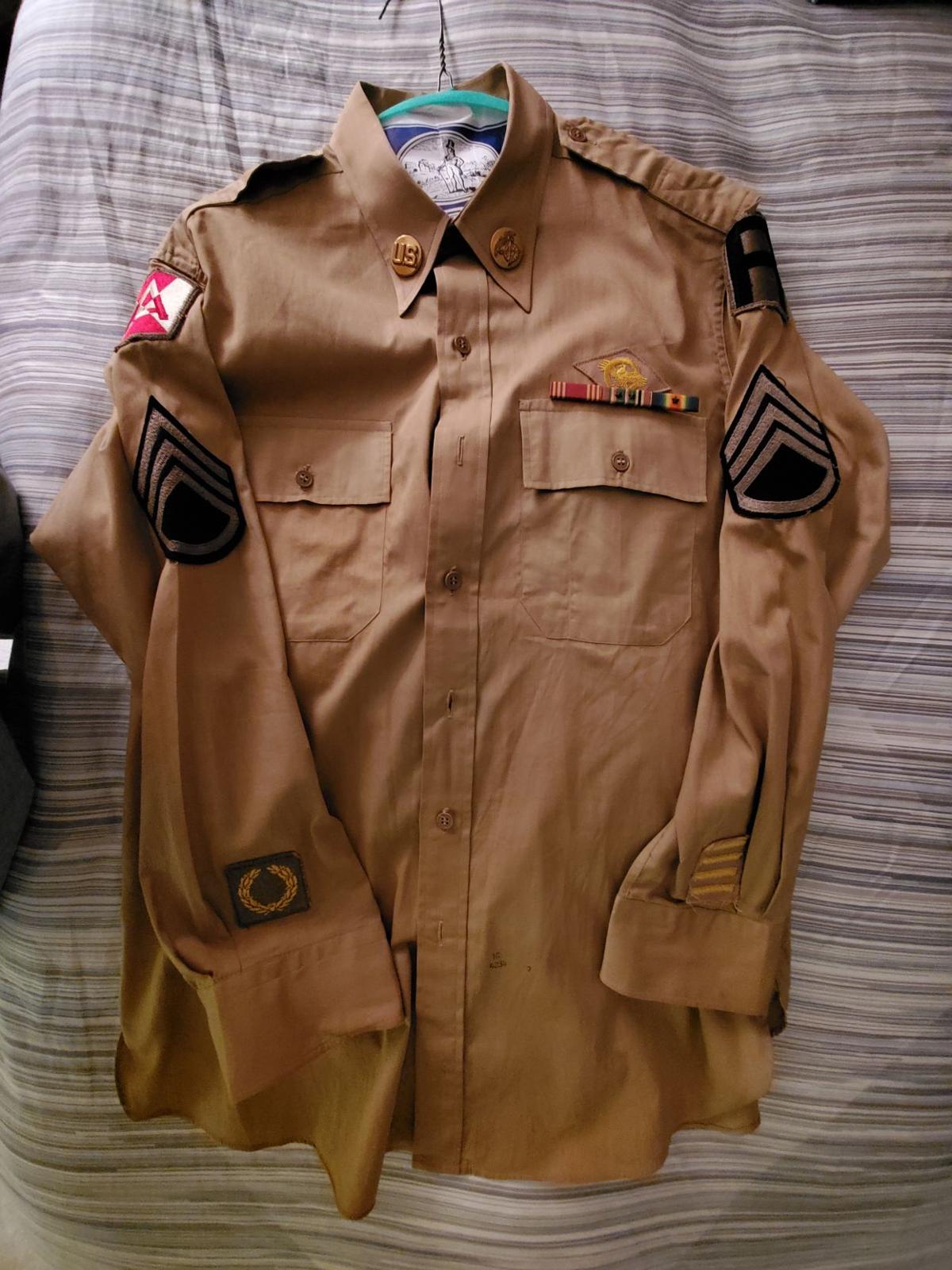 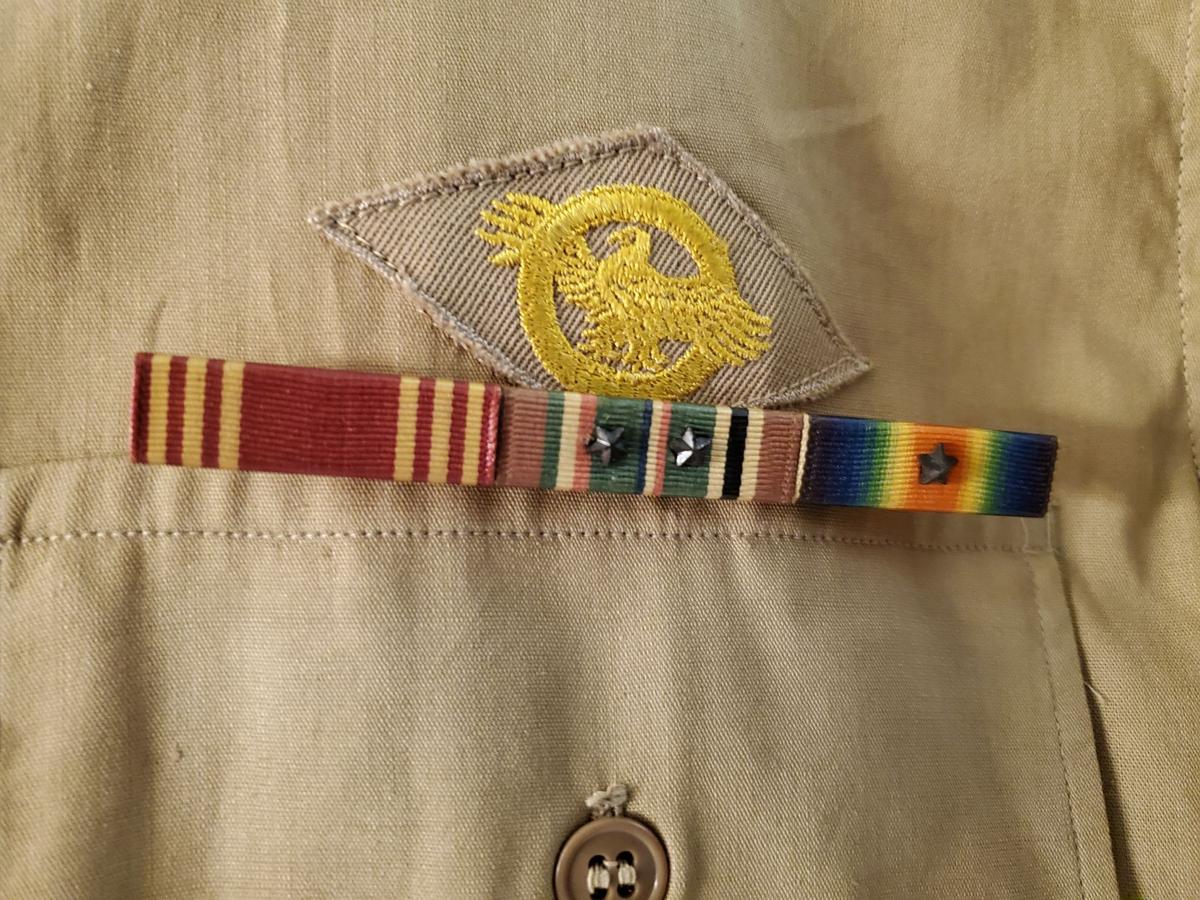 I recently came across a United State Army shirt that belonged to my father, E. Brown Kortright.  He served in Germany during 1944 and 1945.  The shirt contains a number of patches and metal insignia and a bar with three ribbons.    A patch with a large black A at the top of the left arm and a red and white unit patch insignia in the shape of a pentagon is on the top of the right arm.  The shirt has a label that reads: “CREIGHTON [in a banner] / REGULATION SHIRT / FAST COLOR…VAT DYE / SHAPED BODY / SANFORIZED / FABRIC SHRINK LESS THAN 1%.”   The shirt is a size 16.  A picture of the shirt accompanies my email.  Any help you can provide to identify the various patches, metal insignia, and ribbon bar would be appreciated. – DK, The Villages, Email Question

I forwarded a copy of your picture to my son Harry L. Rinker, Jr., who is retired military, a militaria collector/dealer, and a World War II reenactor, albeit with a German rather than an American unit.  He replied as follows:

“The First Army Shoulder patch is the oldest and longest established field army in the United States Army.  It serves as a theater army having seen service in both World War I and World War II….It now [is] as a mobilization, readiness and training command.

“The 15th Army patch was worn from October 23, 1944 through January 31, 1946.  The Fifteenth United States Army was organized in August 1944 at Fort Sam Houston, Texas and arrived in Europe as Nazi Germany was about to collapse.  The Fifteenth was involved in cleaning up the remaining pockets of resistance in the Lorient and St. Nazaire areas of France.  The insignia is in the red and white colors of an army.  The division per saltire and the five sides of the pentagon are suggestive of the numerical designation of the organization while the letter ‘A’ indicates that the organization is an army.  The shoulder sleeve insignia was approved on October 26, 1944.”

The two metal collar insignia are: “US Army” and “US Quartermasters Corps.”

The three ribbons on the service bar are the Good Conduct Ribbon, European-African-Middle East ribbon (3 tours), and victory ribbon (2 tours).

The above demonstrates how much can be learned from a single artifact.  It offers an insight into one aspect of your father’s World War II military career.  This appears to be your father’s final US Army shirt.  It is possible he was part of a different unit earlier in his career.

Hopefully, you have other materials related to your father’s service such as his service and discharge records and one or more photographs of him in uniform.

World War II shirts without patches identical to the one you own sell between $10 and $15.  The insignia, metal collar insignia, and ribbon bar double the value.  A picture of your father wearing the shirt would add another $5 to $10.

I own a brass bed my parents purchased in the 1990s.  When I did an internet search, I found a listing for an identical bed listed as an “Italian Mid-century Hollywood Regency Brass Bed with brass footboard” listed by Dennis Gariulo Gallery for $8,500 on 1st Dibs.  The description continued with “Bough weave that is wrapped at the end/25 sections which are bolted seamlessly.”  The only markings are “MOD DEP” found on the back of the cartouche at the very top of the headboard and “FRASER” in relief on one of pieces.  I also have the side boards.  How realistic is the $8,500 price? – BV, Yorktown Heights, NY. E-mail Question

As the Three Little Pigs said to the Big Bad Wolf – “Not by the hair of my chinny, chin, chin.”  The $8,500 price is a “fools and their money are easily parted” price.”  I would hope that even fools would not fall prey to such an inflated asking price.

It is time for a reality check.  Fraser was an Italian maker of brass beds.  In July 2019, Austin Auction Gallery in Austin, Texas, attempted to sell a Fraser brass bed at auction. The estimate was $100 to $150.  The requested starting bid was $100.  The lot passed.  [See: https://www.liveauctioneers.com/item/73486209_italian-fraser-brass-bed].  WorthPoint.com has a listing for a “Fraser Italian Brass King Size Bed” that sold on eBay on October 23, 2013, for $795.  The footboard is nearly identical to the one on your bed.  The Headboard is less elaborate.  2013 is not 2020.  The secondary market for bass beds is in the doldrums at the present.

Modern brass beds equivalent in design to the one you own retail between $1,000 and $2,000.  Of course, this is a retail price before the beds go out the door.  Once they do, slash the value by 75% to obtain a secondary resale price.

The primary value of your brass bed is reuse.  My advice is simple.  Ask what you want but accept any offer over $200.

I have a framed print by Cassius Marcellus Coolidge that shows a group of well-dressed dogs playing poker inside a train that is pulling into a station.  What can you tell me about the artist and the value of my print?  -- JH, Diamondale, MI, Email Question

Cassius Marcellus Coolidge (September 18, 1844 – January 13, 1934) was known as Cash or Kash to his family.  He occasionally signed his painting Kash Koolidge.  He had little formal training as an artist.  His careers included a druggist, sign painter, and founder of a bank and newspaper.  Eventually, Coolidge moved to Rochester, New York, and began a career as a cartoonist for a local newspaper.  He is credited with developing novelty photographs where a person’s head appears on a caricatured body. Coolidge is best known for a series of 16 painting he did for Brown & Bigelow, a commercial advertising firm, between the mid-1900s to mid-1910s.  The painting featured anthropomorphic (human-like) dogs, nine of which featured dogs playing poker.  The series includes:

4.  A Friend in Need – cheating at poker

5. His Station and Four Aces – poker

15.  Ten Miles to a Garage – travel and car trouble

Your print is “His Station and Four Aces.”  The train conductor is shown informing his passengers to disembark.  A dog with the smallest pile of chips holds four aces and will not be able to finish the hand.  His look is one of shock and horror.

Reproductions of the Coolidge dog prints abound. Famedart.com currently offers a framed (27 inches by 21 inches) and matted example of “His Station and Four Aces” for $97.99, reduced from $195.99.  Period framed examples that have been reframed and have new acid-free matting sell between $100 and $125.  Given this, why buy a reproduction when the period examples sell for equal to or less than a modern, framed reproduction.

One final note:  Coolidge dog prints were produced in a wide variety of sizes.  Collectors and decorators favor the larger sizes rather than the calendar sizes.