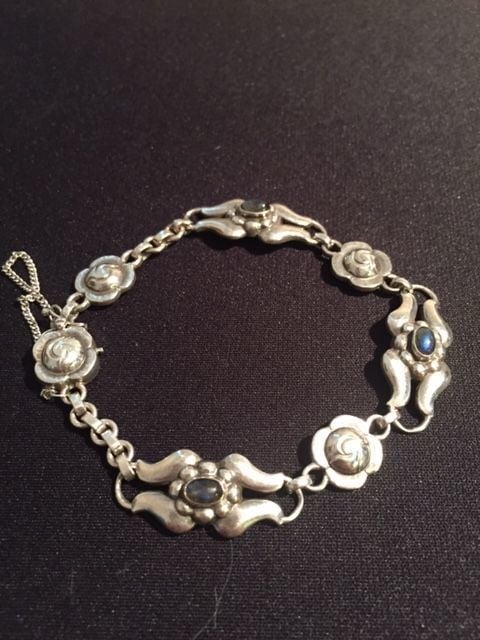 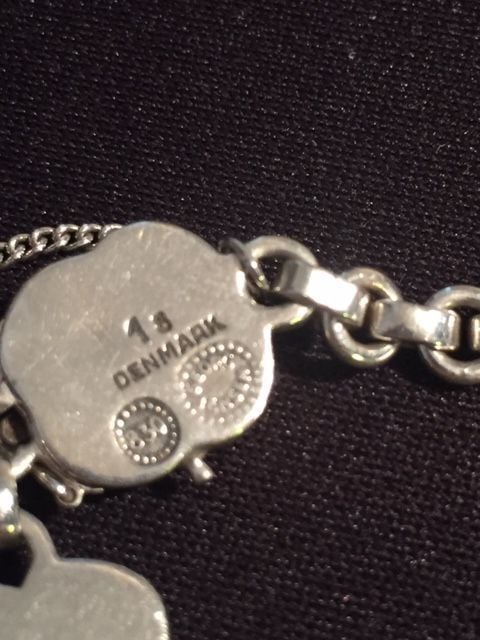 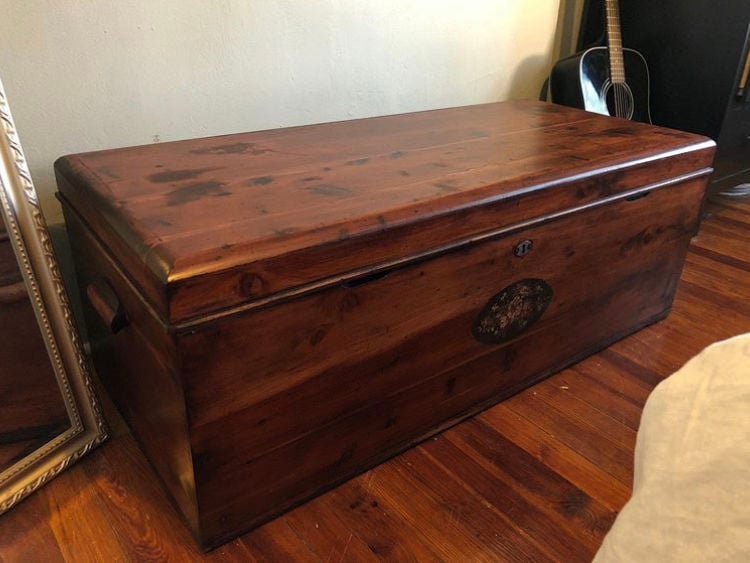 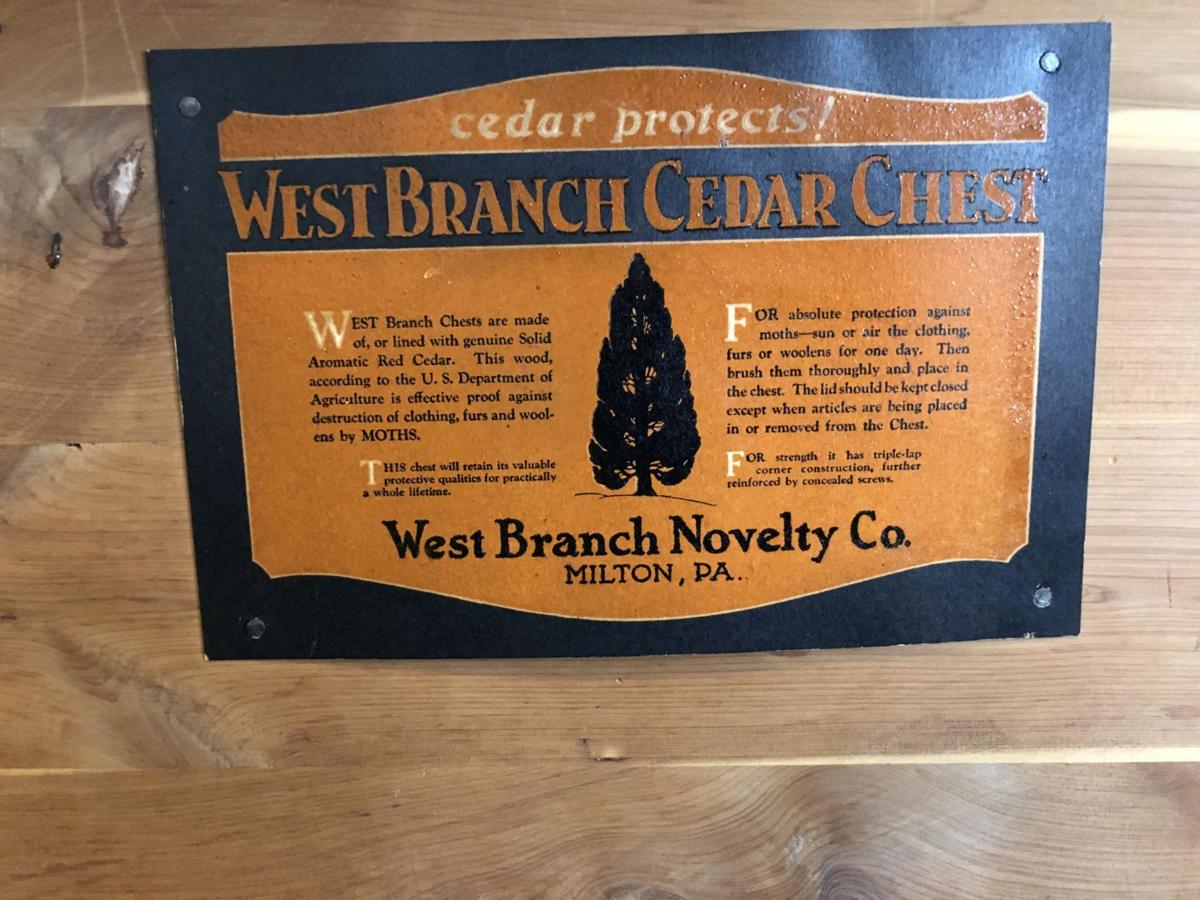 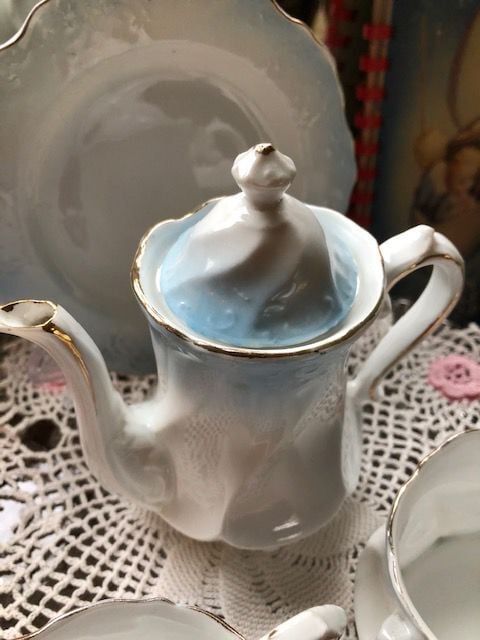 I have a Georg Jensen silver bracelet set with a few small, oval blue stones. My husband purchased the bracelet for me in Florida several years ago. There are several markings on the back of one of silver floret pieces: “18 S / DENMARK / [circle of dots inside of which is ‘830’] / [circle of 23 dots inside of which is “GEORG” in an arch at the top and “JENSEN” in a reverse arch at the bottom]. I am thinking of giving it to my 16-year old granddaughter. What are your thoughts? – EC, Palm Harbor, FL, Email Question

First, thank your husband for his generosity and good judgment. Second, do not give the bracelet to your 16-year old granddaughter. Third, keep the bracelet and wear it.

Your bracelet is a hidden gem. The story behind it reveals how the approach to costume jewelry has changed over the years.

The Georg Jensen No. 18 bracelet was made beginning around 1915 and remained in production into the 1950s. Age is a value factor and easily determined by the markings on the bracelet.

The 1893 Danish Hallmarking Act set a silver standard of 826 parts out of 1,000. The Sterling standard is 925 parts silver per 1,000. The balance is made up of copper and other minerals designed to strengthen the silver. Around 1915, the Danish Hallmarking Act was revised and the silver content raised to 830. Georg Jensen did not switch to the sterling standard until 1927, albeit he made some earlier pieces designed for export to America in 925 silver.

Based on the information above, your bracelet was made between 1915 and 1927. Being conservative in my dating approach (not every example is made in year one), I date the bracelet between the early to mid-1920s.

A Ruby Lane seller currently is offering a “Georg Jensen Arts and Crafts Bracelet No. 18 for $950.” This size is 7 3/8-inches long. It is marked “Sterling / Denmark / 925 / 18 / [conjoined “CJ”].” The conjoined “CJ” mark dates from 1933 to 1944. The $950 dealer asking price is in marked contrast to the sell through prices on eBay. Buyers seeking an example would save money if they had patience and were willing to watch for the bracelet on other secondary sale sites.

A viable secondary market value for your Georg Jensen No. 18 bracelet, based on its early production markings, is between $650 and $700.

I purchased a cedar chest at a yard sale. It is a generic, rectangular cedar box design. Inside the lid is a label from the West Branch Novelty Company of Milton, Pennsylvania. I am curious to know what year the cedar chest was made. – NC, Queens, NY, Email Question

F.S. Chapin, George C. Chapin, H. R. Frick, and Marshall Reid founded the West Branch Novelty Company in 1893. Initially, the company made bamboo furniture. Within a few years, the company was the largest single importer of bamboo in the United States.

By 1913, West Branch Novelty Company cedar chests became the most financially successful product line. Production of bamboo furniture ceased following the end of the First World War. After that, production focused only on the manufacturing of cedar chests.

The cedar came from the southern states. Hard veneer woods used on design-style chests came from Africa, Asia, Australia and other countries. Although West Branch Novelty Company cedar chests were sold worldwide, the principal market was the United States east of the Mississippi River. Department stores were the primary retail outlet.

The West Branch Novelty Company made cedar chests into the 1950s. I was unable to find information on the internet as to when the company ceased operations.

The company made two basic types of cedar chests. The first is a generic six-sided chest that consisted only of cedar. This is what you own. The second is a cedar-lined chest whose exterior is a stylistic interpretation of earlier furniture design styles such as Tudor, William and Mary, Chippendale, Hepplewhite, and Spanish.

The type face and design of the label on the lid of your chest suggests a manufacturing date in the late 1940s or early 1950s. The late 1930s is a possibility, but a remote one.

I know you have no interest in the secondary market value, but I could not resist doing a “Sale Date” search on WorthPoint.com. I was surprised to find that the design-style chests from the 1920s through the 1940s are experiencing a strong secondary market with sell through prices above $250 to $300 as standard fare. Generic examples sell through for close to $100.

I purchased a children’s porcelain tea set that belonged to a woman who was approximately 80 years old. The set had previously belonged to her aunt. The set has 3 cups, 6 saucers, 6 plates, creamer, sugar bowl, and teapot. The teapot has style elements on the lid, handle, and spout similar to those found on RS Prussia children’s tea sets but no decoration. I do not really care what it is worth. I just wonder if it is RS Prussia in origin. – TM, Janesville, WI, Email Question

In 1869, Reinhold Schlegelmilch established a porcelain factory in Suhl, Germany. In 1893, Reinhold began exporting dinnerware and other porcelain to the United States. When the U.S. Tariff Act of 1894 lowered the duties on decorated porcelain, Reinhold increased the exportation of tablewares between five and ten times. His sons Ehrhard and Arnold joined the firm.

Ehrhard succeeded his father as the head of Reinhold Schlegelmilch in 1899. The firm continued to update its mold and decorative patterns, focusing heavily on Art Nouveau styles. The use of decals (decalcomanias) began around 1900.

American tastes shifted around 1905 to simpler form. Cheap Japanese imports gained market strength. The use of the “R.S. Prussia” trademark ended in the early 1910s.

The 1891 McKinley Tariff Act required that goods imported into the United States be marked with their country of origin. It did not require every piece to be marked. In some cases a mark on the packing crate was enough to satisfy the Act’s requirements.

Firms such as Richard Schlegelmilch did not have an endless supply of shape molds. Diversity was created by varying the decorative patterns placed on the shapes. The result is that collectors develop shape vocabularies to identify unmarked pieces. This requires a study of marked pieces. Manufacturers often knocked off rivals’ shapes. Often the design change requires a sophisticated eye to spot.

Fortunately, there are an abundance of R. S. Prussia and children’s tea set reference books. They are out-of-print but available on the secondary market or through interlibrary loan. Your mission, should you choose to accept it, is to acquire these reference books and start paging through them.

If you get lucky, you will be able to identify the “exact” shape that is found on your children’s set. The match needs to be exact. There are no apple/orange matches in the antiques business.

Good luck with your search.