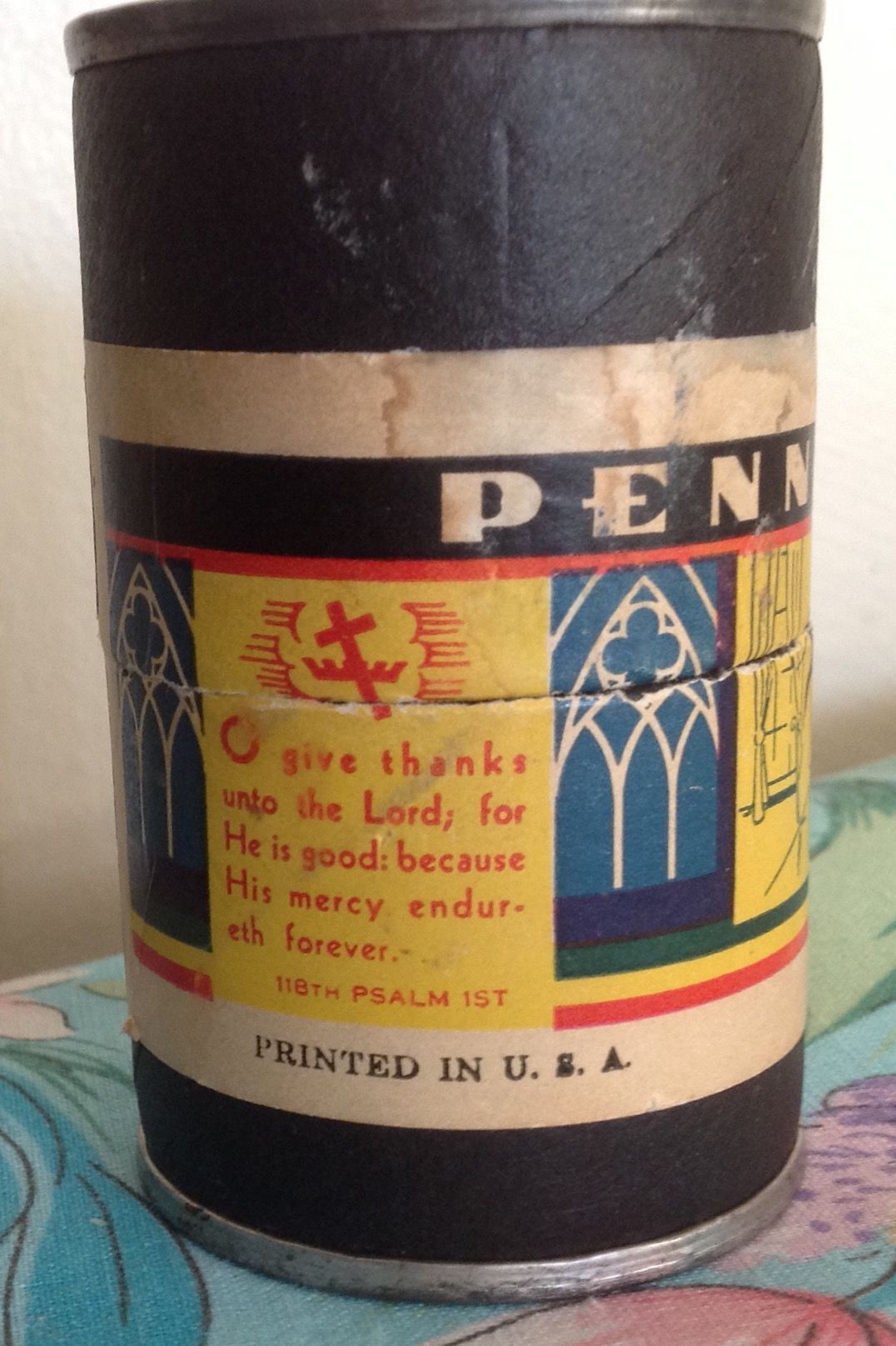 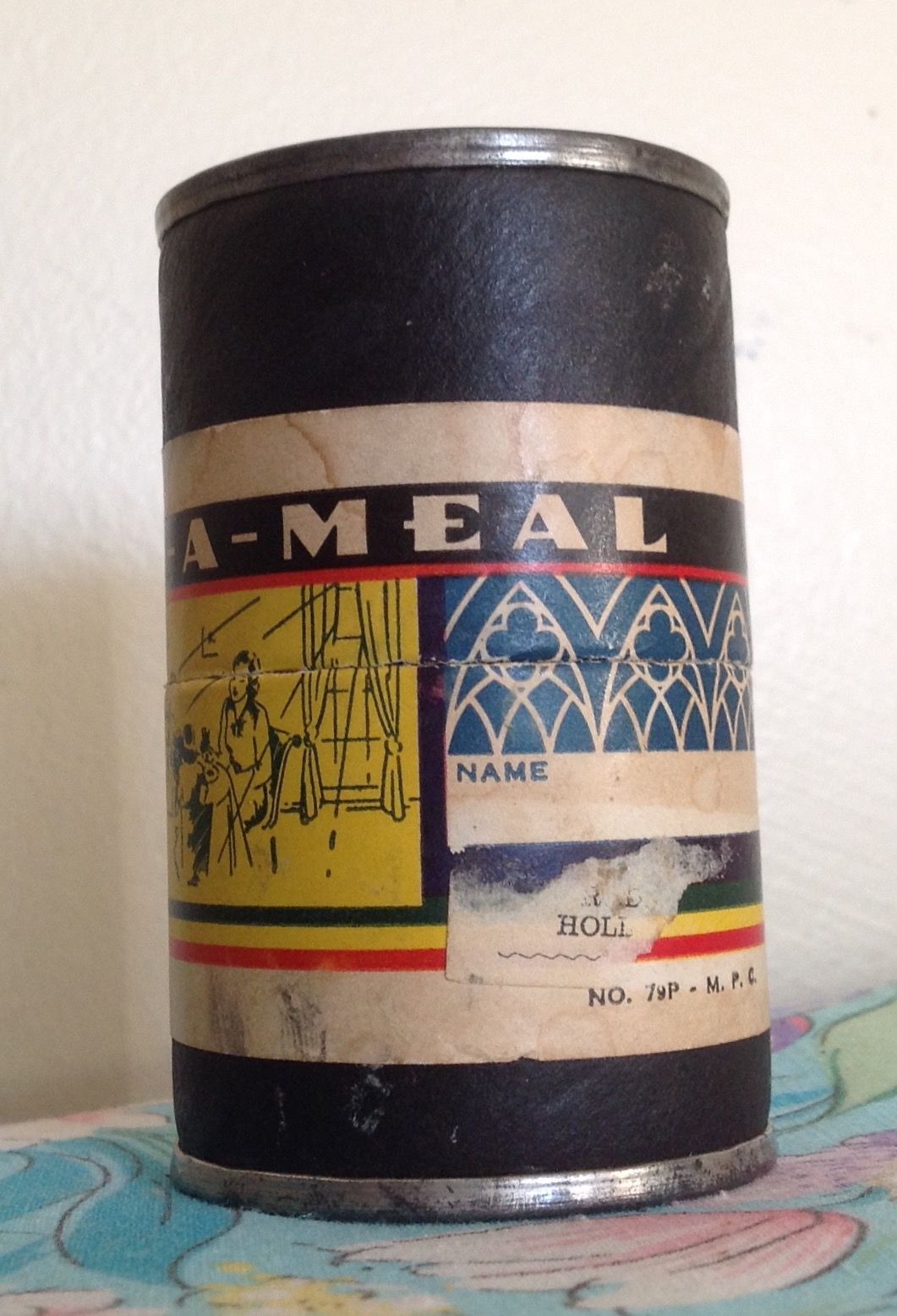 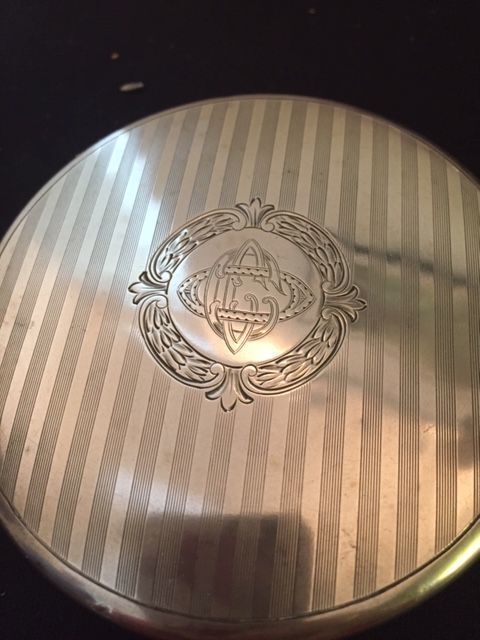 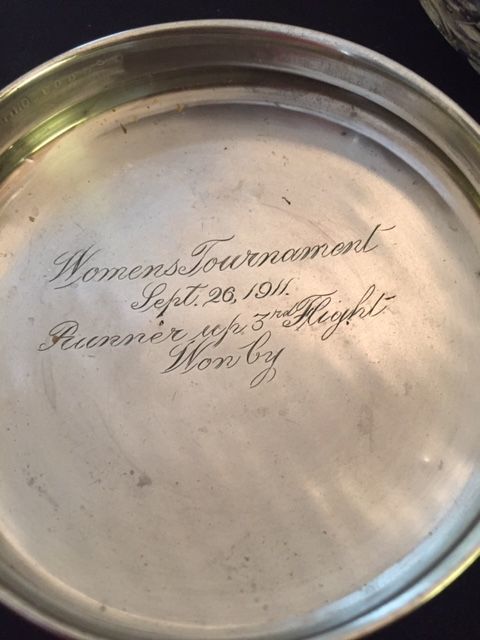 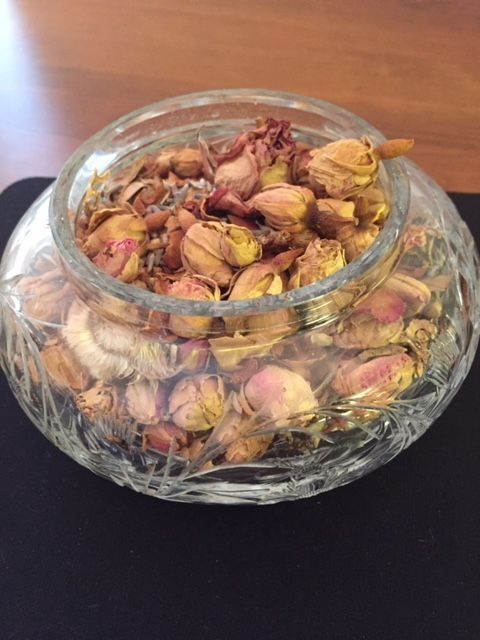 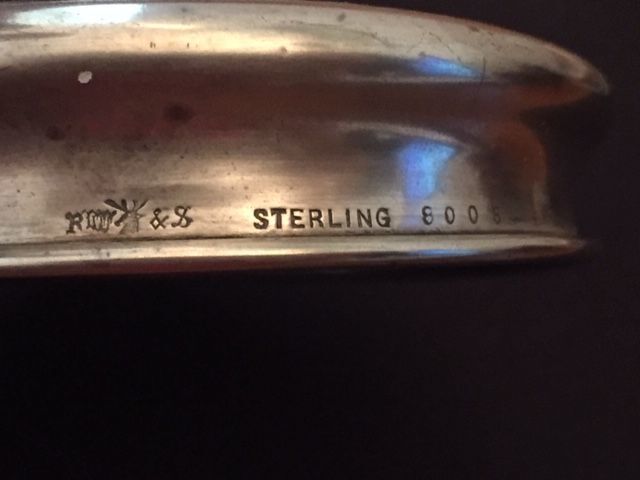 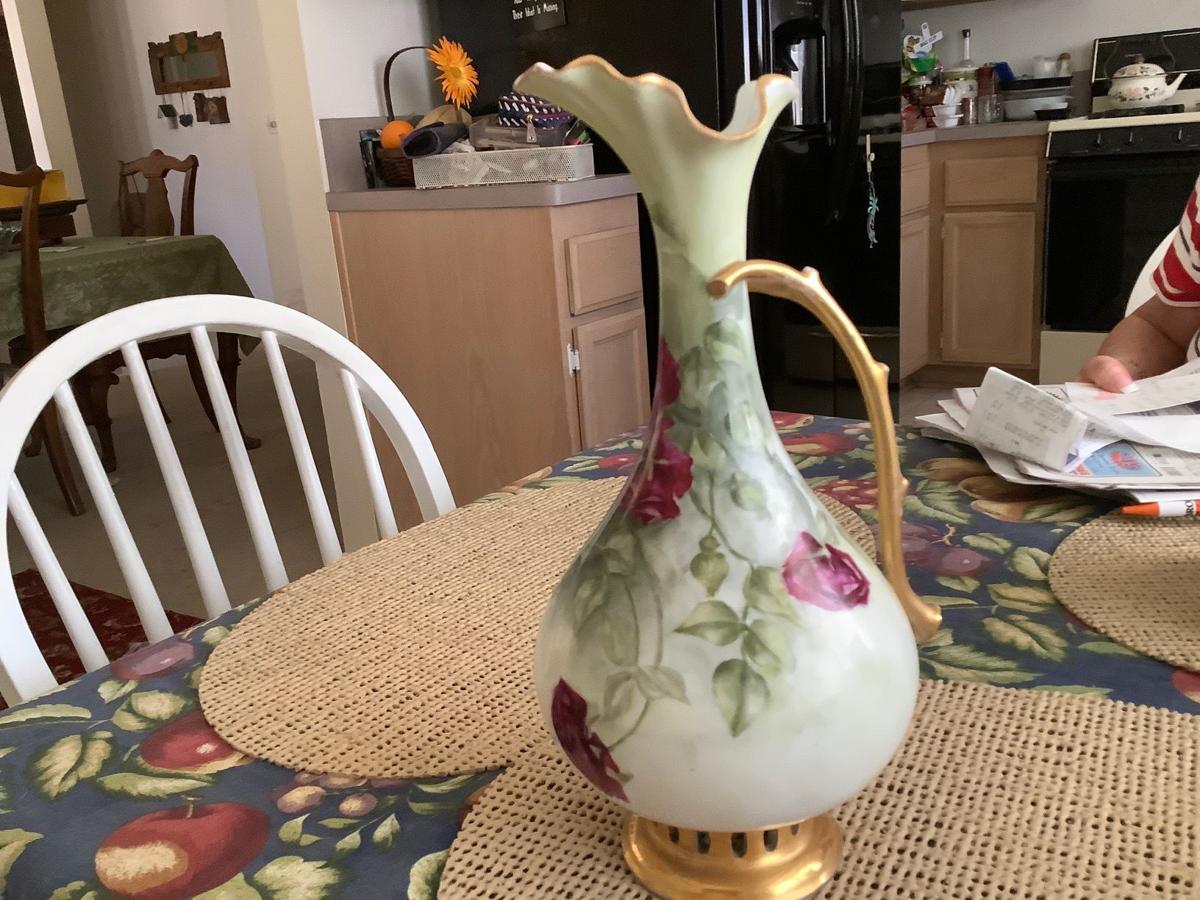 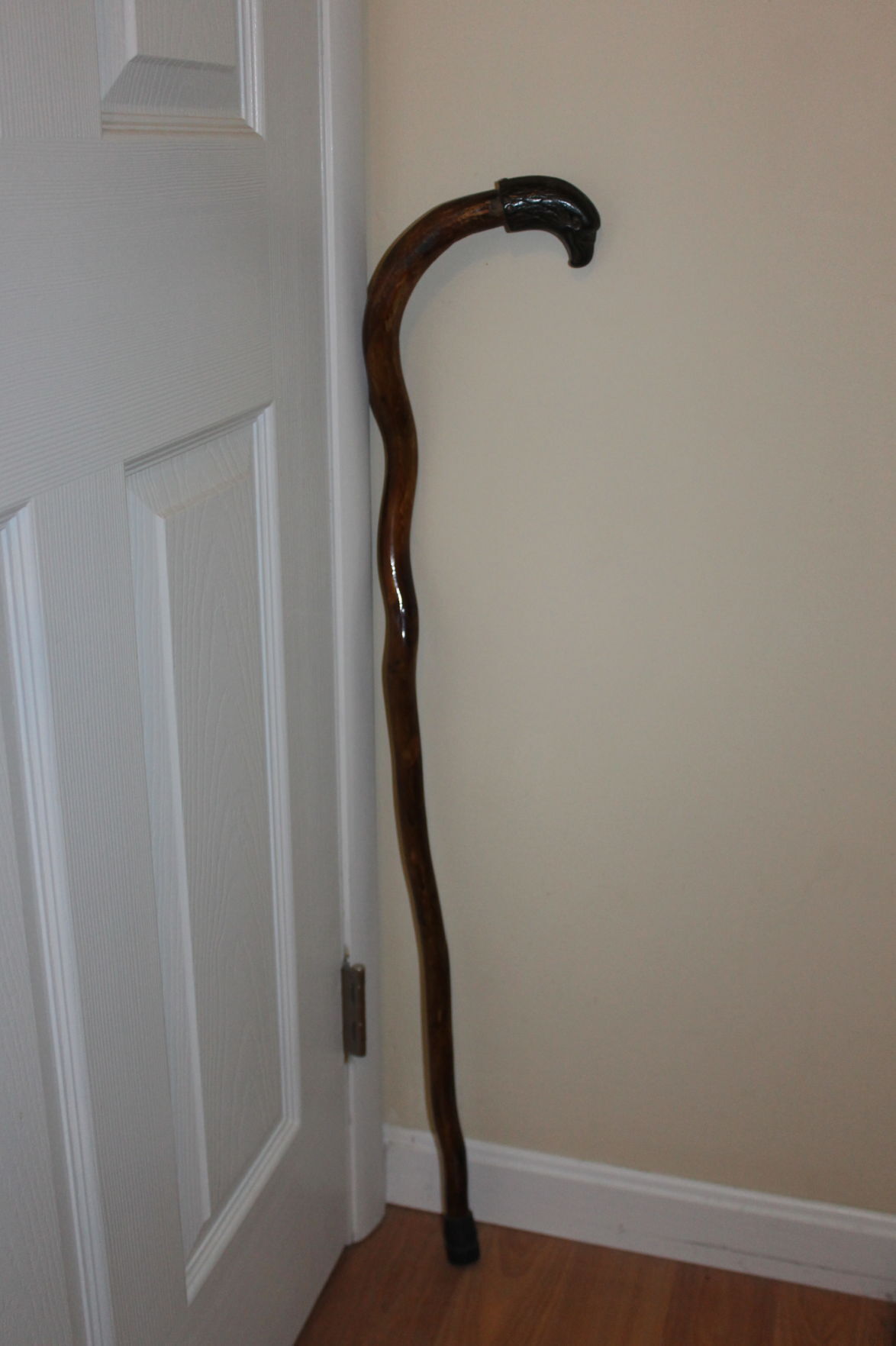 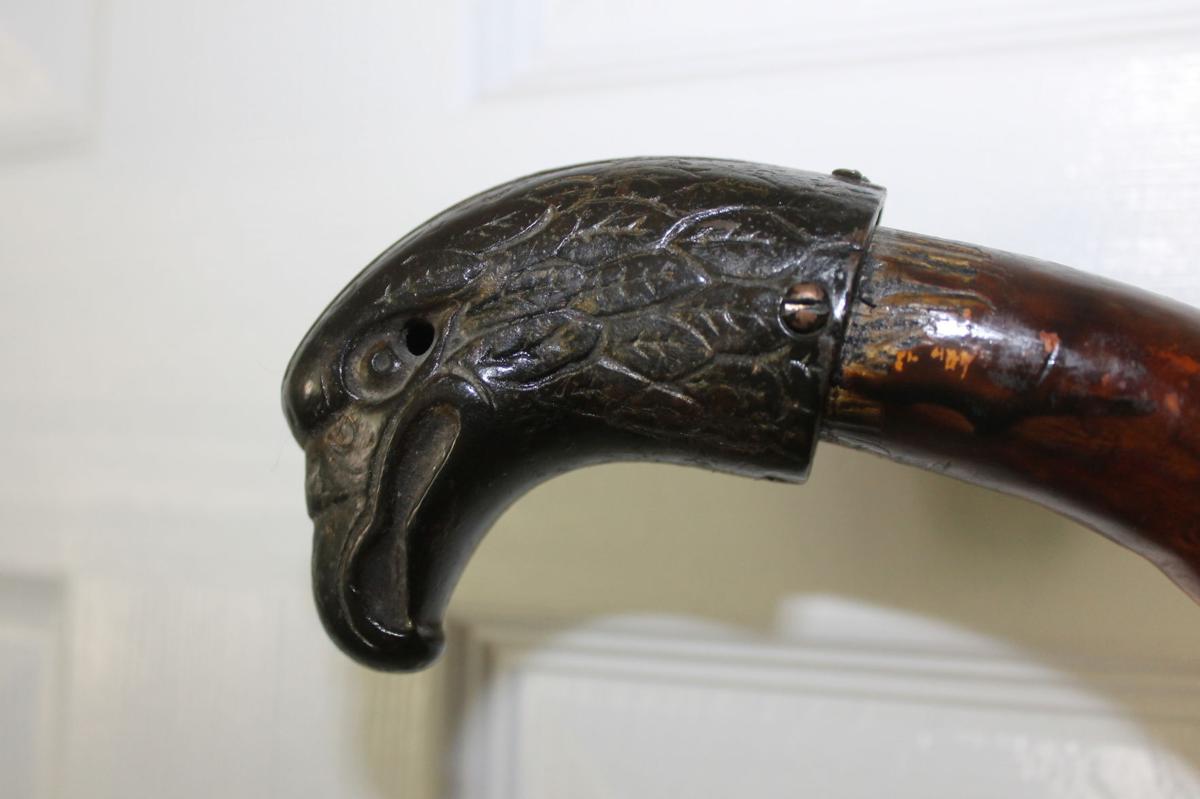 I have a “PENNY-A-MEAL” cylindrical cardboard bank. It is approximately 3.5 inches high and about 1.75 inches in diameter. The printed label with a Gothic church window motif has a place for a person’s name and a panel with a cross in a crown above “O give thanks / unto the Lord, for / He is good: because / His mercy, endur- / eth forever. / 118th Psalm 1ST.” What is the history of this bank and its value? – WRTA Listener, Altoona, PA, Email Question

Your “PENNY-A-MEAL” bank was part of a national effort to feed the unemployed during the Great Depression of the 1930s. Anne Ewbank’s article, “During the Great Depression, ‘Penny Restaurants Fed the Unemployed – Dishes cost a cent, or even came free” posted on June 15, 2018 on the website Atlas Obscura (https://www.atlasobscura.com/articles/restaurants-during-great-depression) provides a detailed account of the Penny restaurants in the greater New York City area and Los Angeles.

Penny restaurants, usually run as a charity operation, were a place for the downtrodden and not-quite penniless to eat. They were an alternative to the bread line. Although common in the Great Depression, Penny restaurants date back to late 19th century America.

Each item cost a penny. A meal consisting of half a pound of bread, soup, potatoes, pork and beans, and coffee cost a nickel. Churches, other charitable institutions, and some established restaurants provided Penny-A-Meal services. By 1935, as the job market improved, many Penny-A-Meal restaurants and charity restaurants closed.

A WorthPoint.com “Penny-A-Meal bank” search revealed several different banks. Chein, a manufacturer of lithograph tin toys, made a Penny-A-Meal lithograph tin church bank. Several variations are known, most selling on eBay around $25.00 in very good or better condition. David Cook Publishing Company created a metal, cylinder Penny-A-Meal bank that featured a family sitting at a table. One sold recently for $13.56 on eBay. There were several barrel-shaped “SAVE A PENNY A MEAL FOR YOUR CHURCH” banks made from metal and pressed cardboard. Most sold on eBay in the $20.00 range.

Your Penny-A-Meal bank has a secondary market, retail value between $12.50 and $15. The value is more curiosity and historical than collectible.

I have a cut crystal powder/dresser jar with a sterling silver lid that I use to hold potpourri. It measures 5 1/2-inches across and stands 2 3/4-inches high. The inside of the lid is engraved in a flowing script: “Women’s Tournament / September 26, 1911 / Runner up 3rd Flight / Won by.” I believe my grandmother, who lived in Pittsburgh, was the recipient of the powder/dresser jar. The lid has a maker’s mark that is difficult to decipher. It appears to be the initials “RW” followed by a stag’s head or windmill” followed by “& Sons.” There also is a “STERLING 800” marking. The top of lid has alternating bands of lines separated by plain bands. In the center of the lid is a wreath inside of which is a possible monogram. Again, I cannot figure it out. I would appreciate any information you can provide. – EC, Palm Harbor, FL, Email Question

The manufacturer’s mark on the lid of your powder/dresser jar is that of R. Wallace & Sons, located in Wallingford, Connecticut. The symbol between the “RW” and “& Sons” is a stag’s head. R. Wallace & Sons was the successor to Wallace, Simpson, & Company. The firm R. Wallace & Sons operated under that name from 1871 until 1956 when it became Wallace Silversmith. The dual marking of “STERLING,” which contains 925 parts per thousand of silver, and “800,” the German silver equivalent, is confusing. I have no idea why they appear on the same piece. From a value point of view, the melt value difference between the values of 925 content silver versus 800 content silver is minimal.

The machine line engraving on the lid is known as guilloché (machine engraved decoration on metal, also referred to as engine turned). The technique was used heavily in the early decades of the 20th century. It is found on metal card cases, cigarette cases, some jewelry, and lighters.

My best guess regarding the possible monogram in the middle of the wreath on the lid is “C” over “C.” Assuming the last “C” stands for club. Imagine my excitement when I did an “historic Pittsburgh country clubs” Google search and found a reference to the Chartiers Heights Country Club. Sometimes one gets lucky, other times not. This is one of the “not” times. The Chartiers Heights Country Club was not founded until 1924. “C” over “C” could stand for country club and was a generic symbol for any country club wishing to use the powder/dresser jar as a trophy.

My recommendation is to do a search of the Pittsburgh newspaper for the week following the golf tournament. If luck is with you, you will find a report on the tournament, a location, and a list of the flight winners. Hopefully, the list includes the name of your grandmother.

There are multiple values for your powder/dresser jar. Its strongest appeal is to a golf collector. Golf was one of the acceptable women’s sports in the early 20th century. Value to a golf collector is between $85 and $100. The jar has conversation/decorative value, albeit it is minimized by the inscription’s location on the bottom of the lid. If sold into this market, the value is reduced to $50 to $60. The powder/dresser jar also has reuse value but only to an older person. Most young female adults have no use or even knowledge of powder/dresser jars. Value in this marketplace is between $35 and $40. Because of the thinness of the lid and the current price of an ounce of silver, there is only minimal melt value. Dismiss this option entirely.

Given its family connection, the idea option is to keep it in the family. Now all you need to do is find a family member who wants and will cherish it.

I have a ceramic pitcher that has a circular base, a bulbous body with a high neck, a scalloped edge pouring spout, and a tree branch handle, and is decorated with red roses and rose stems on a white ground that shades to a light green on the top. The bottom is marked with an “X” with and “R.” in the left section, a “G.” in the right section, and a crown in the top section. Beneath this mark is “GERMANY” in light red. I would like your opinion on this piece. – M, Email Question

Your pitcher has factory paint as opposed to decorative painting from a member of an amateur china painting school. Rosenthal manufactured white blanks for china painters.

Collector interest in your pitcher has diminished in the 21st century. In a large urban market, a dealer/seller would list it at $125 to $150 and be happy to get $100. In a countryside market, a reasonable price would be $65 to $85.

I recently purchased a cane at an estate sale for $25. The only information the homeowner provided about the cane was that it was “old” and may have come from the Civil War. The curved handle and shaft are a single piece of gnarled wood. A cast metal eagle head is attached to the end of the curve of the handle. The cane is approximately 37” tall. The cast metal eagle head has four holes for screws so that it can be affixed to the cane. It looks like a piece of folk art to me. What are your thoughts? – GF, Medina, OH, Email Question

I did a WorthPoint.com search of “Eagle head canes.” I found several cast eagle head top attachments for canes that were close in design to the one found on your cane but not an exact match.

In the 1850s and during the Civil War US Officers’ saddles had a cast eagle head pommel. Comparing pictures of the period eagle head pommel with the one on your cane suggests they are identical. However, when examined closely, there are two key differences. First, your eagle head has a hole for a screw just behind the eye. This is not true on the military models. Second, your eagle head does not have the same depth of detail for the feathers on the neck. These two facts suggest the possibility that your eagle head is a later reproduction, possibly done in the 20th century.

Is it possible a pre- or Civil War saddle cast eagle pommel was removed from a saddle and attached to a piece of wood for a cane? Stranger things have happened. My gut says no.

My recommendation is that you take your cane to a Civil War re-enactment featuring Union cavalry units and show it to the re-enactors. You also can take it to a Civil War museum and ask the curator if he/she can authenticate it.