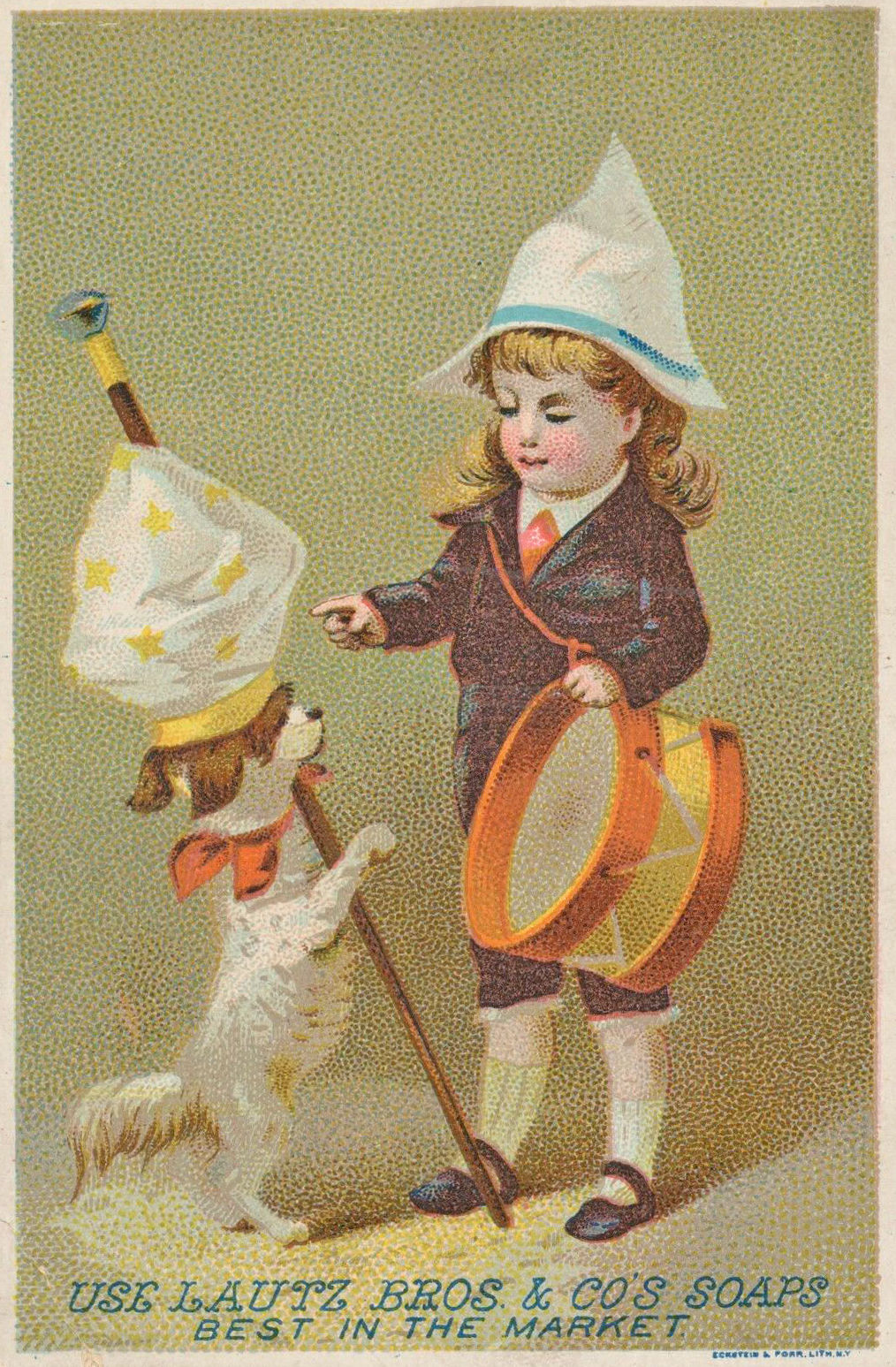 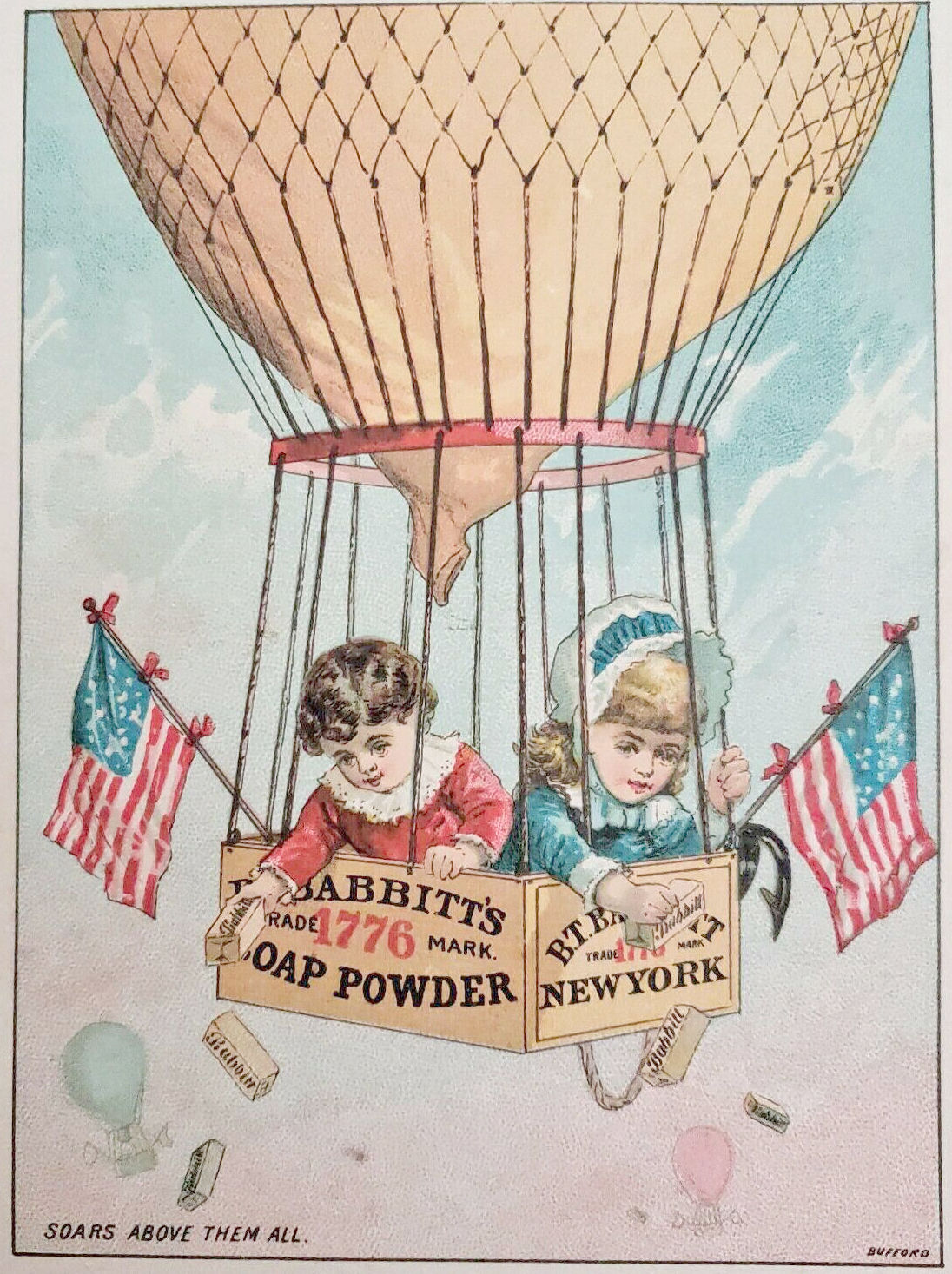 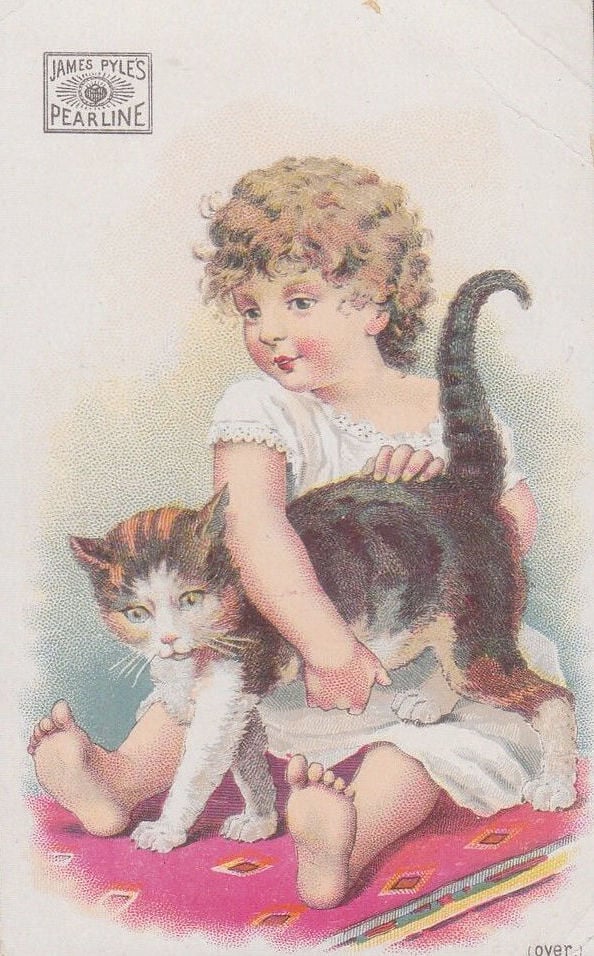 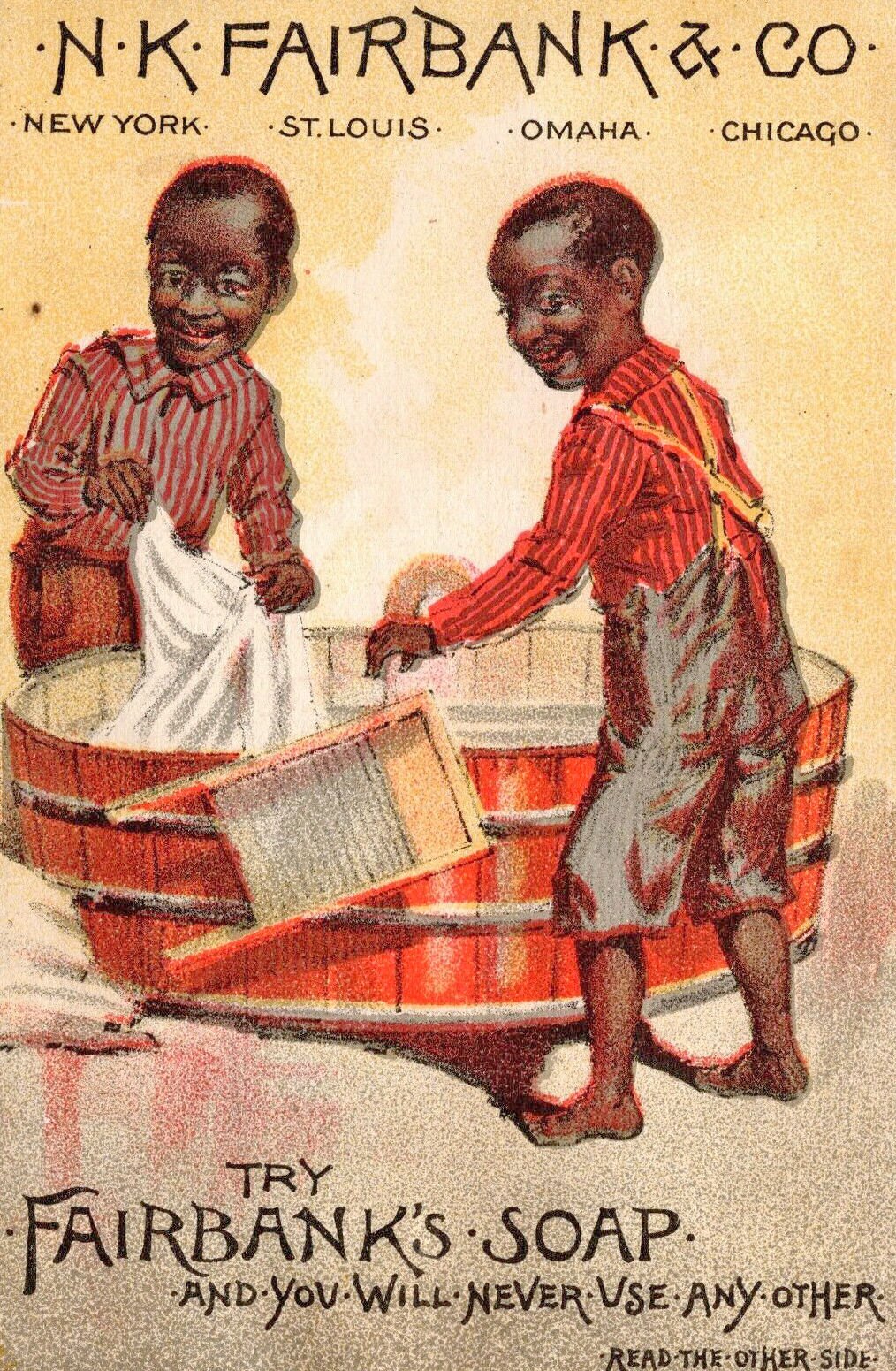 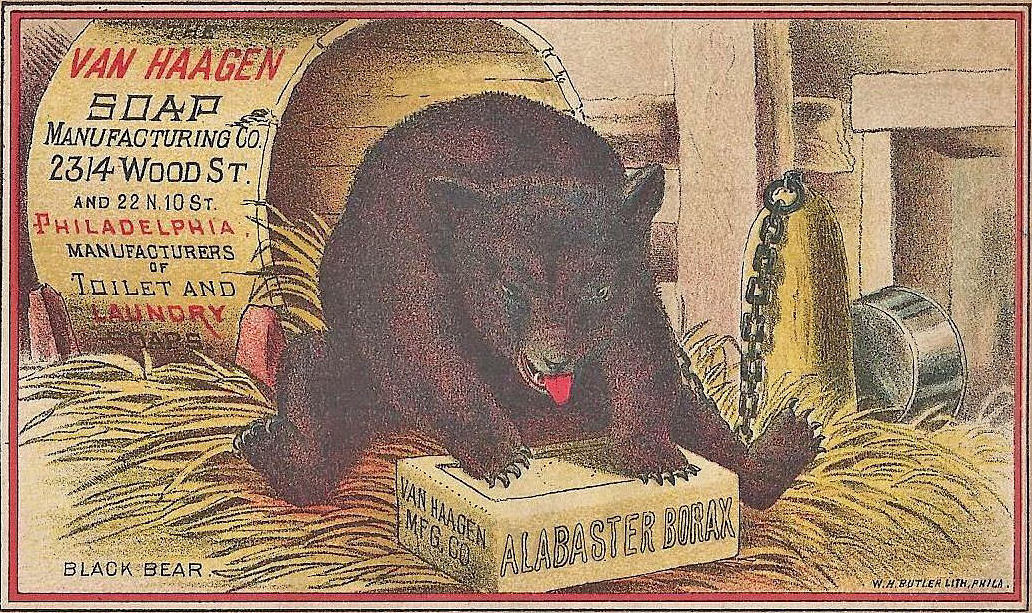 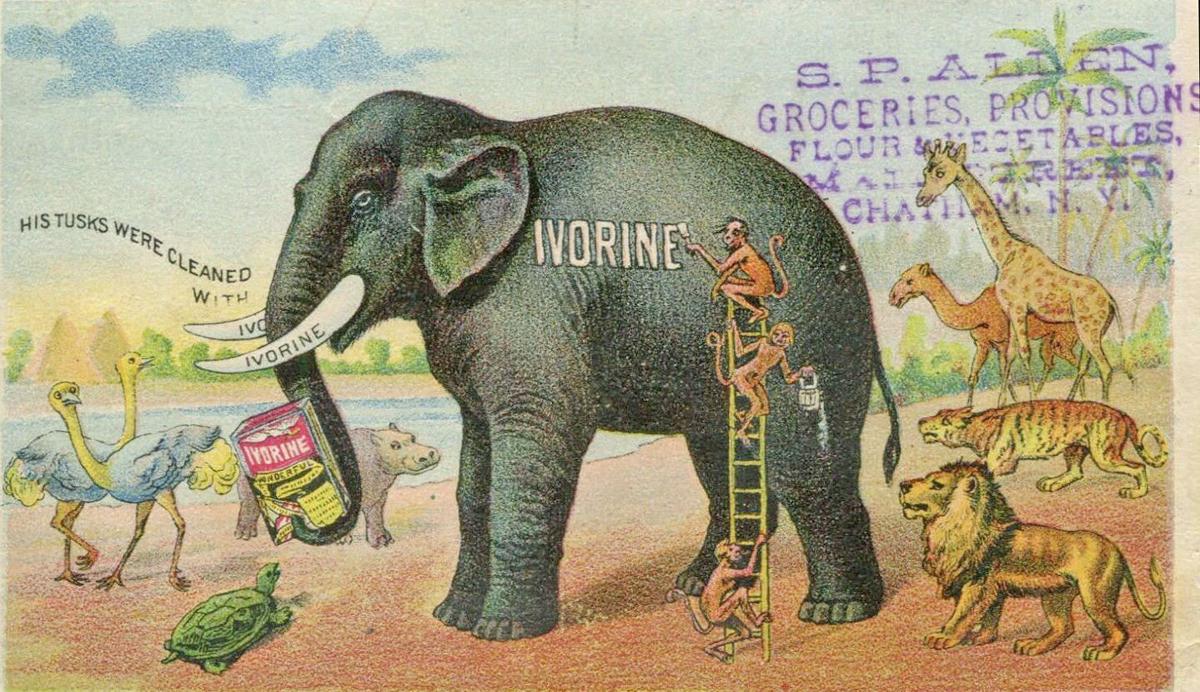 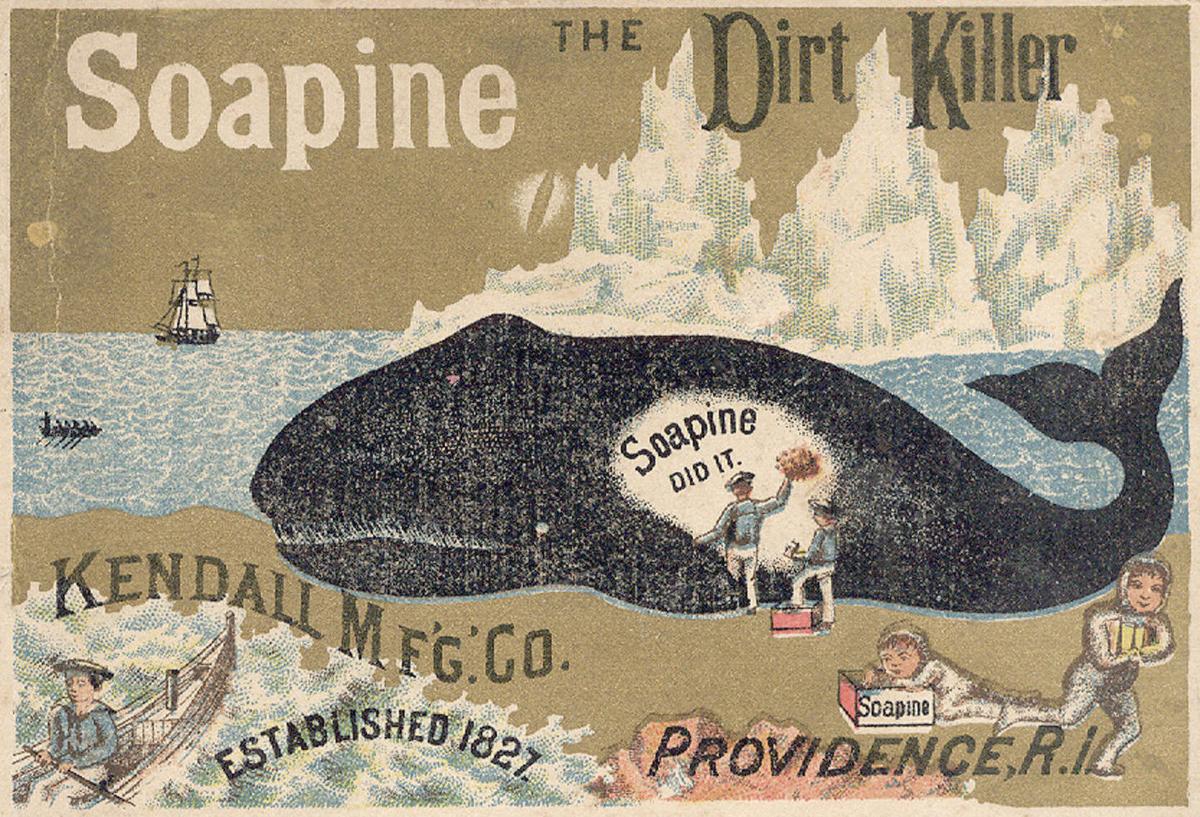 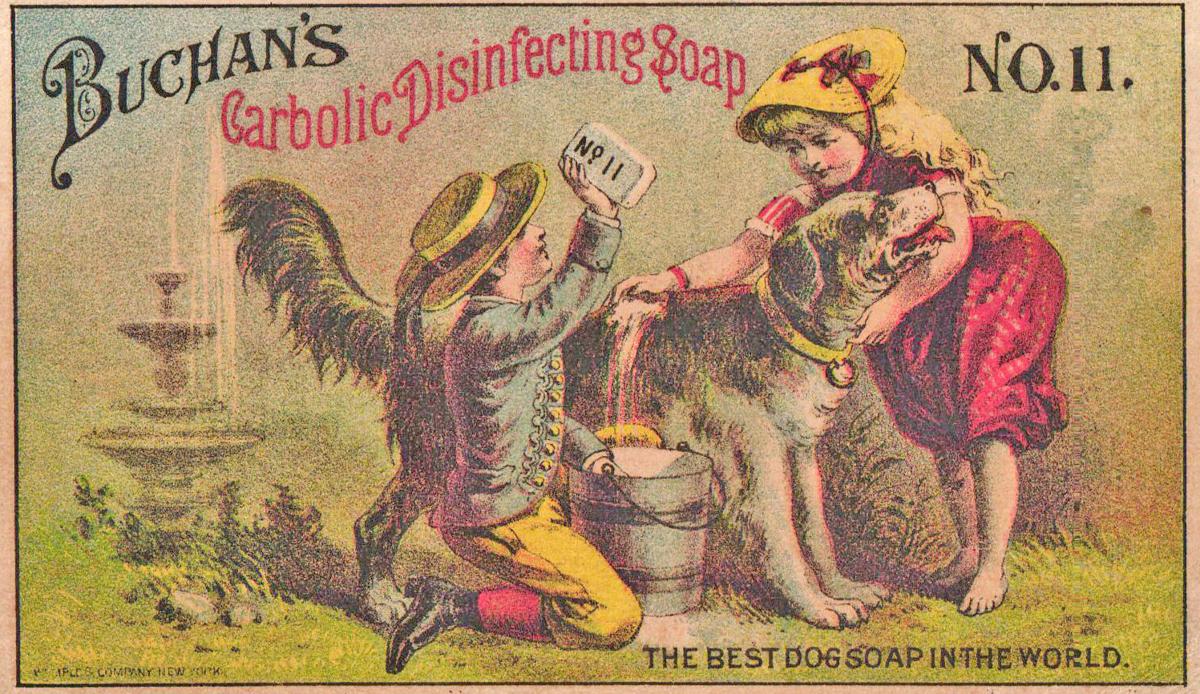 Soap is the second most represented commodity advertised on Victorian trade cards.  Only patent medicine cards surpass soap cards in numbers.  Patent medicines and soaps have something else in common.  They both offered ways in which people could take care of themselves and their families.  Over time, the legitimacy of patent medicines has been controversial and, in some instances, outlawed.  This is not the case with soap.  Soap had been valued for its hygienic usefulness long before the Victorians marketed it on their trade cards.

As long ago as 2800 B.C., Babylonians used soap not only for personal bathing but also for the cleaning of cooking utensils and textiles and for medicinal purposes.  In Roman mythology, rainwater draining down the slopes of Mount Sapo mixed with ashes and fat from animal sacrifices to form a gift from the Gods which became known as “soap”.  In Rome, soap was used for bathing.  With the fall of the Roman Empire, soap fell into disrepute.  The Catholic Church discouraged bathing and especially the use of soap as being hedonistic.  This probably contributed to the rise of the Black Death that ravaged Europe during the Dark Ages.  With the dawning of the Renaissance, soap made a comeback.  By the 1600s, soap making was being practiced in Colonial America.  By the 1800s, making soap at home was a common practice throughout the United States.  The ingredients for soap making were readily available on farms (water, animal fat and ashes) and inexpensive.  However, the process for making soap was long and laborious not to mention dangerous.  Many soap makers suffered chemical burns or worse yet lost an eye from lye splashes.

City dwellers wanted no part of soap making but desperately wanted the product.   Manufactures were happy to oblige and began making and marketing their products.  By the 1870s, numerous companies were advertising their soaps by means of trade cards.  Among these were Lautz Brothers and Company (Figure #1), B.T. Babbitt’s (Figure #2) and James Pyle (Figure #3).  Several other companies had specific images with which they advertised their trade brand soaps.  N.K. Fairbank & Company promoted their soap with ethnic blacks (Figure #4).  McKeone, Van Haagen and Company had its bears (Figure #5) while the J.B. Williams Company used elephants (Figure #6).  By far the most recognizable figure associated with a specific brand of soap was the beached whale with a large white spot used by the Kendall Manufacturing Company for Soapine (Figure #7).  The idea was of course that Soapine was so powerful that it could clean the black off a whale.  How could you possibly go wrong by purchasing such a cleaner!

Most soap products were designed for human use, however Buchan’s Number Eleven Carbolic Disinfecting Soap was made specifically for animals (Figure #8).  Its makers, Kidder & Laird claimed that, “Its properties are not only disinfectant, but is peculiarly suited to remove parasites, sores and hurts from animals.  Dogs are freed by it from fleas, mange and scurf, and their coats are purified from bad odors and rendered glossy.”  Sure wish I had some of that stuff for my golden retriever!

To this day, soap remains an essential product in everyday life.  Soap disrupts the cellular membranes of pathogenic organisms found on the skin of both man and beast.  This function of soap is more relevant today than ever before.  The viral composition of the Covid-19 virus can be successfully broken down when people wash their hands properly.  The rule of thumb is to wet your hands first then to soap them and wash them long enough to sing “Happy Birthday” twice before rinsing.  I prefer “Yankee Doodle Dandy” myself.

When was the last time that you employed the healing quality of soap?  If you can’t remember, go wash your hands!