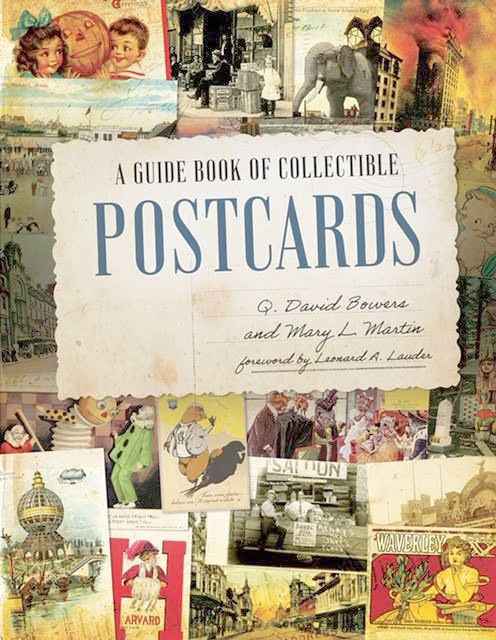 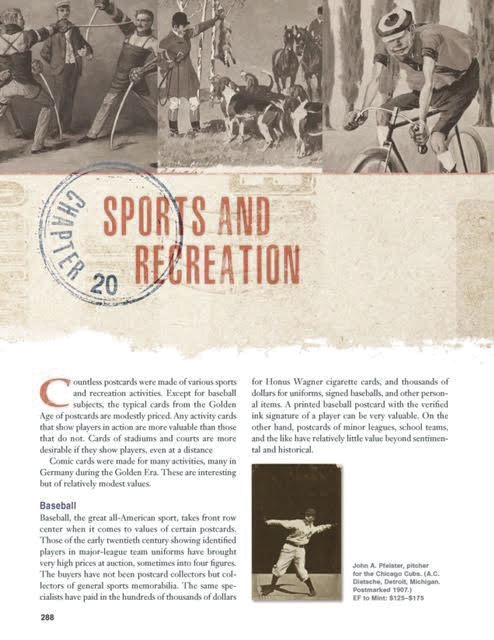 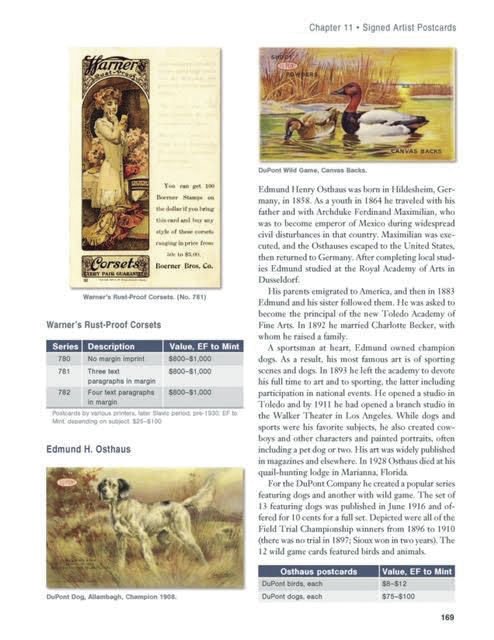 Like many hobbyists, I’ve read Q. David Bowers’s books since I was a young collector. For more than fifteen years I’ve also had the honor of being his publisher, adding many new works to his extensive oeuvre. As for Mary L. Martin, I’ve known of her for almost as long—Dave sings the praises of Mary’s parents, and of Mary herself, as experts in the field of postcards. It was an honor to finally meet her in person a few years ago, at her shop in Havre de Grace, Maryland, as the three of us discussed their latest collaboration, the 432-page Guide Book of Collectible Postcards.

Early in the planning process for this book, Dave shared some letters written between himself and a well-known postcard collector: Andreas Brown, president of the famous salon-like Gotham Book Mart (West 47th Street in Midtown Manhattan’s Diamond District). Dave had invited Brown’s feedback on a manuscript he was preparing on the postcards of Alphonse Mucha. Their letters back and forth are a fascinating exploration of grading, rarity, market values, buying and selling—every aspect of the postcard hobby, “an interesting field of interesting people collecting interesting things,” as Dave put it in one letter.

Those letters illustrate that Dave Bowers is neither a newcomer to the hobby, nor a dilettante. They were written in 1980. His coauthor on the Alphonse Mucha book was Mary L. Martin the elder—mother of his current collaborator.

Collectors of coins, paper money, medals, and tokens have known Dave Bowers as a prolific researcher and writer since the 1960s. Some also know he’s written authoritative references on other interests, such as automatic music machines and early silent-film history.

Over the years as Dave’s publisher at Whitman Publishing, I’ve often been asked, “How does he write so many books?”

First of all, as Isaac Asimov and other productive authors have said, “A writer writes”—and Dave has been doing this for more than fifty years. But what he does is multi-faceted and immersive, more than the simple (but important) physical act of sitting down at a desk and putting pen to paper.

The cornerstone of his system is the Bowers archives. Long before the Internet, Dave was compiling a personal library and research center of books, newspapers, magazine clippings and snippets, and other resources—anything and everything relating to his scholarly interests. He read and studied decades’ worth of old periodicals and made note of everything relating to, for example, postcards, collecting in the Golden Age, the intricacies of printing and distribution, Post Office procedures, and more.

As technology has advanced, so has the Bowers research machine. Historical images that he earlier had to clip, photograph, or photocopy can now be scanned and saved digitally in high resolution. Instead of having to travel to faraway museums and archives, email and the Internet put him in a hundred places at once, with instant communications.

This touches on another important factor in how Dave Bowers works: collaboration. “To have a friend, you must be a friend,” as the saying goes. Over a career that has spanned decades, he has built a reputation as a researcher who generously shares information instead of jealously guarding it.

In return, other scholars share their own specialized insight—and Dave absorbs and synthesizes it as only he can, to then give to his readers.

Another element of the Bowers method is a constant and never-resting spirit of inquiry that spans genres, disciplines, and fields. Dave is as curious a student of current events as he is of the past. His book subjects run up and down the Dewey Decimal System. The hobby community is fortunate that postcards captured his imagination early on, and have never let go.

For the Guide Book of Collectible Postcards, the foundation of the manuscript was the knowledge Dave Bowers has been gathering over many decades as an active collector and historian. His partner in building on that foundation needs no introduction to postcard collectors. Mary Martin is the owner and operator of the biggest postcard dealerships and shows in the United States (quite possibly the world?), and an accomplished researcher in the field. She has authored, coauthored, or edited some fifty books on the subject of postcards. When I visited her Maryland shop in 2018, her inventory numbered in the millions of cards, dating back to the art form’s Golden Age (the 1890s through World War One).

Mary collaborated on the outline of the Guide Book, reviewed Dave’s research, and provided hundreds of high-quality scanned images. She marshaled her extensive knowledge of the market to provide valuations for the 1,300-plus cards illustrated, and values for hundreds of card types, varieties, and topics.

As famous collector Leonard Lauder observed in his foreword to the 2016 Bowers/Martin book The Postcards of Alphonse Mucha, “Postcard collectors value the hunt.” Every hunter benefits from a good guide, and the new Guide Book of Collectible Postcards leads the way.

Not simply a useful reference, the new volume will appeal to multiple and diverse audiences. Students of art, history, advertising, and related fields find the Guide Book interesting and informative. Fans of Art Nouveau, American comics, and vintage photography enjoy a gallery of outstanding works. Active hobbyists benefit from the valuation charts, detailed catalogs, and check lists. These resources give a blueprint to follow while building your collection, as well as a guide to valuing and analyzing cards you already possess. The bibliography, glossary, appendices, and indexes add to the book’s already impressive utility.

These diverse and well-crafted facets—educational and artistic, collector-oriented, market-savvy, and historical—combine to make Guide Book of Collectible Postcards a delightful and valuable addition to every bookshelf. I’m proud to have worked on it, and I hope you enjoy it.

Dennis Tucker is the publisher of Whitman Publishing; and numismatic specialist in the U.S. Treasury Department’s Citizens Coinage Advisory Committee. He is a longtime collector of postcards and has written articles for Postcard World magazine.

A Guide Book of Collectible Postcards

By Q. David Bowers and Mary L. Martin; foreword by Leonard A. Lauder