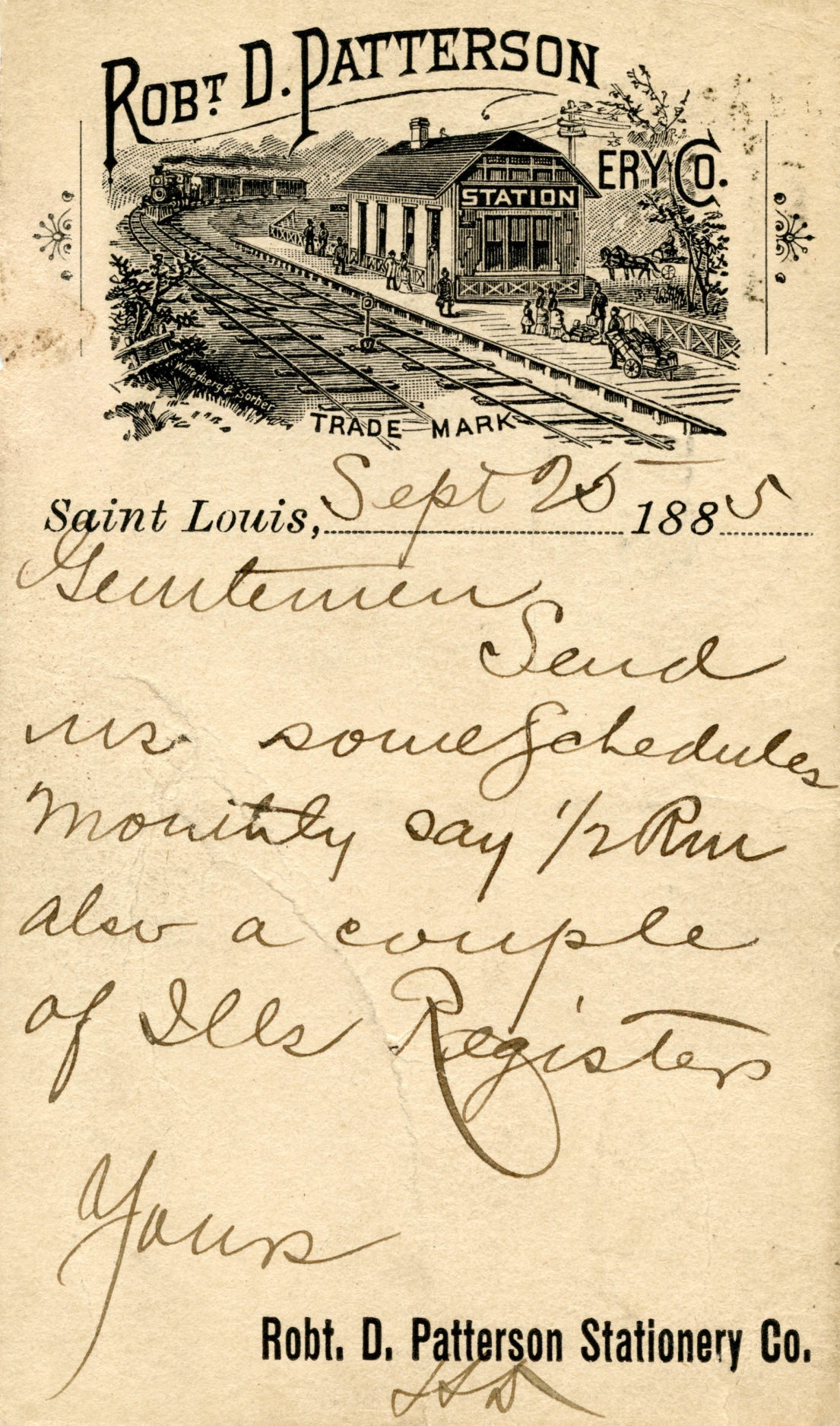 A railroad-themed postcard on which the Robt. D. Patterson Stationery Co. ordered supplies from another company in 1885. 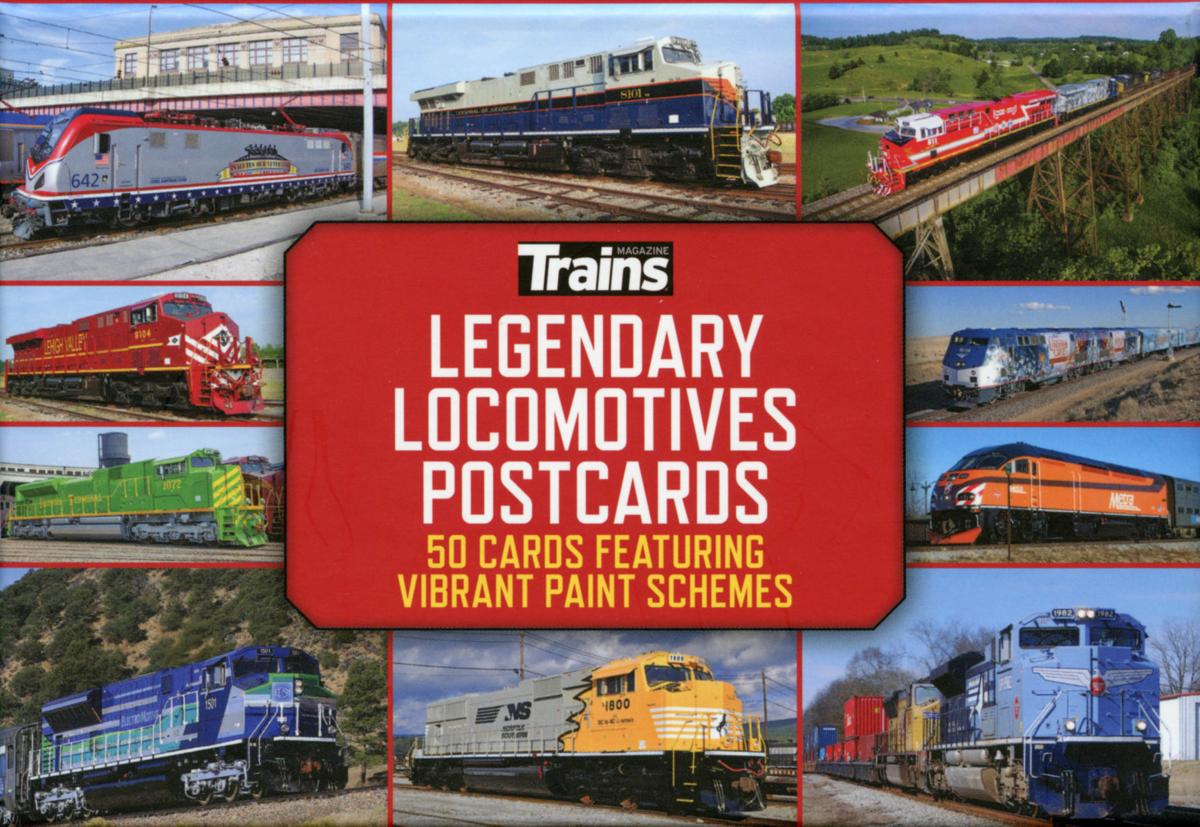 The cover of Trains’ 2020 release of 50 locomotive postcards in a boxed set. 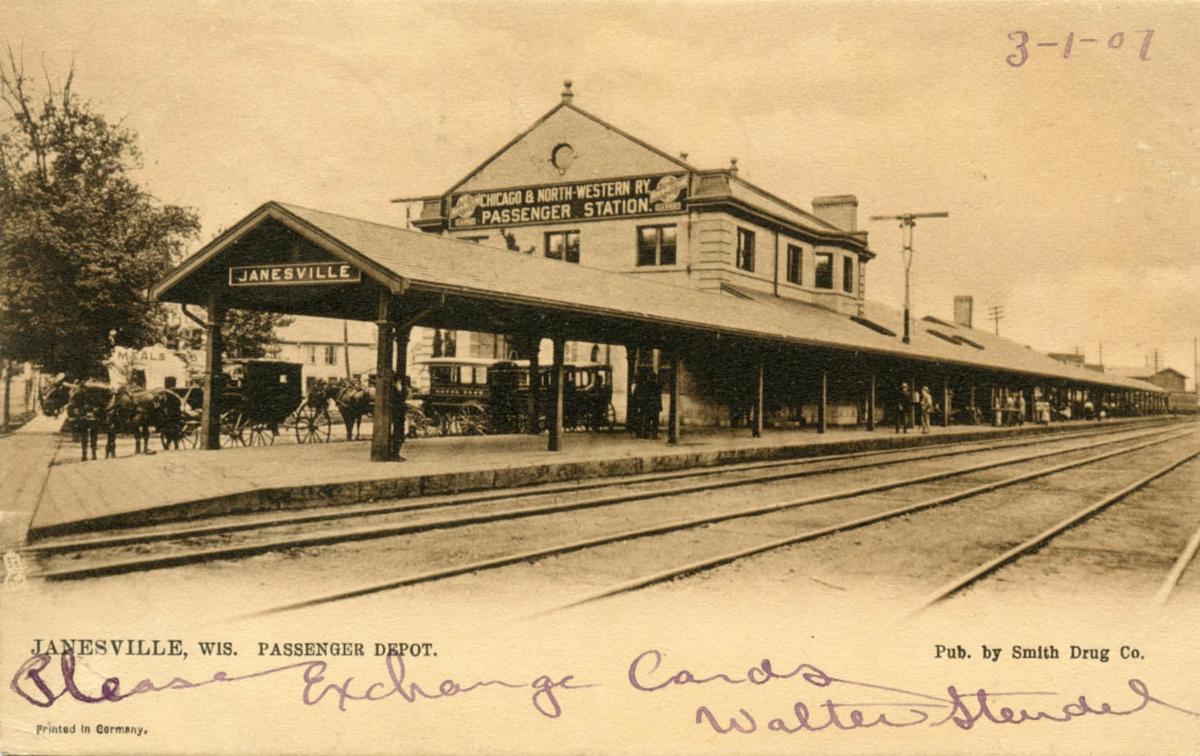 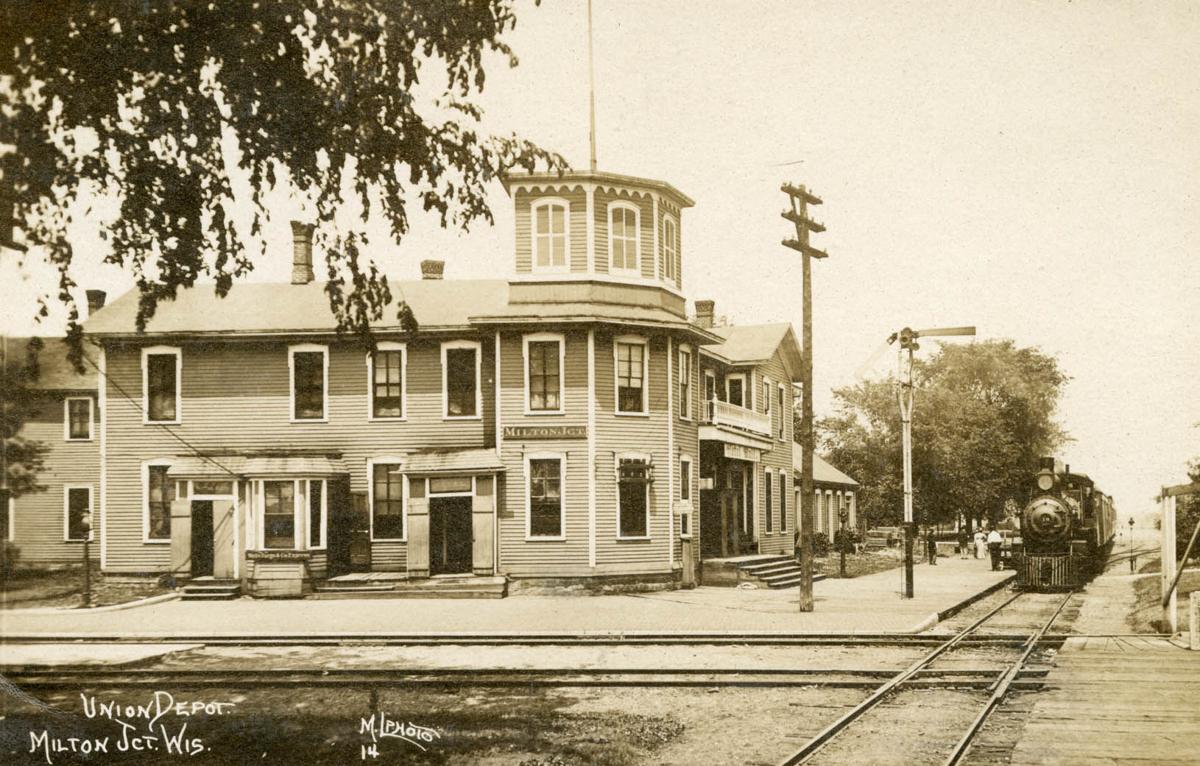 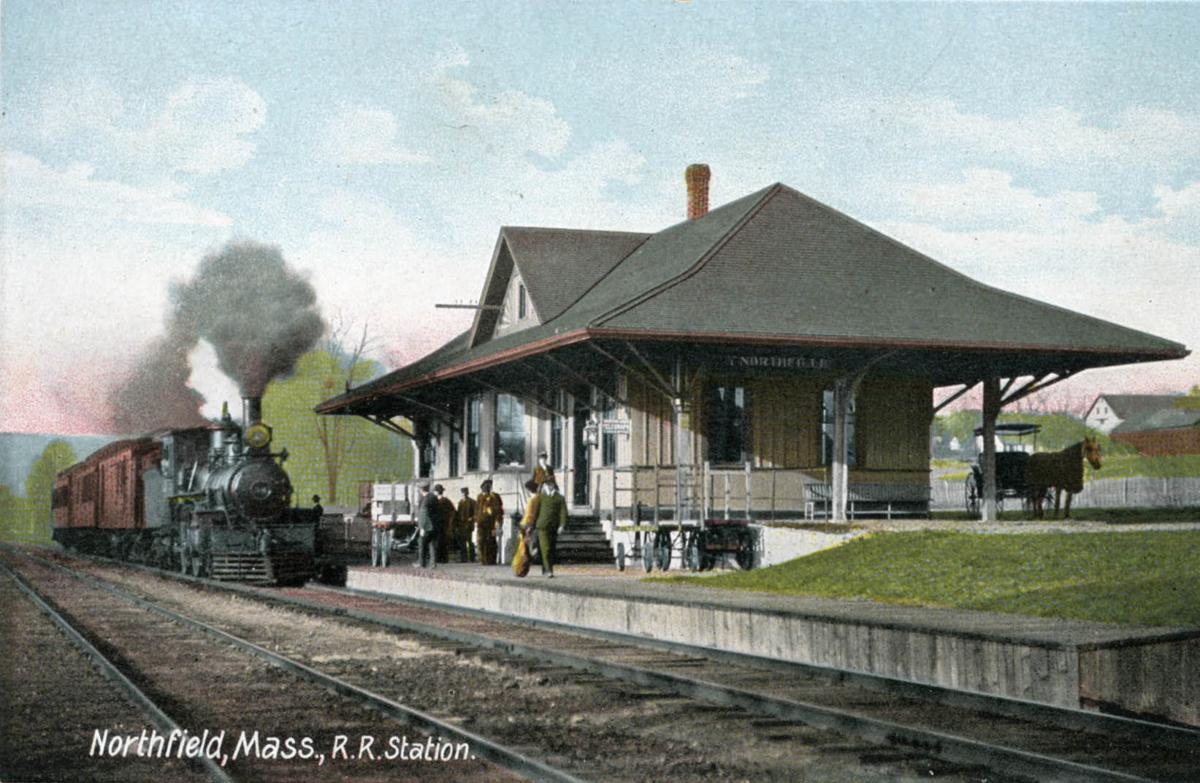 A classic railroad scene from 1911, including a train, seven people, and a horse and buggy at the Northfield, Mass., station. 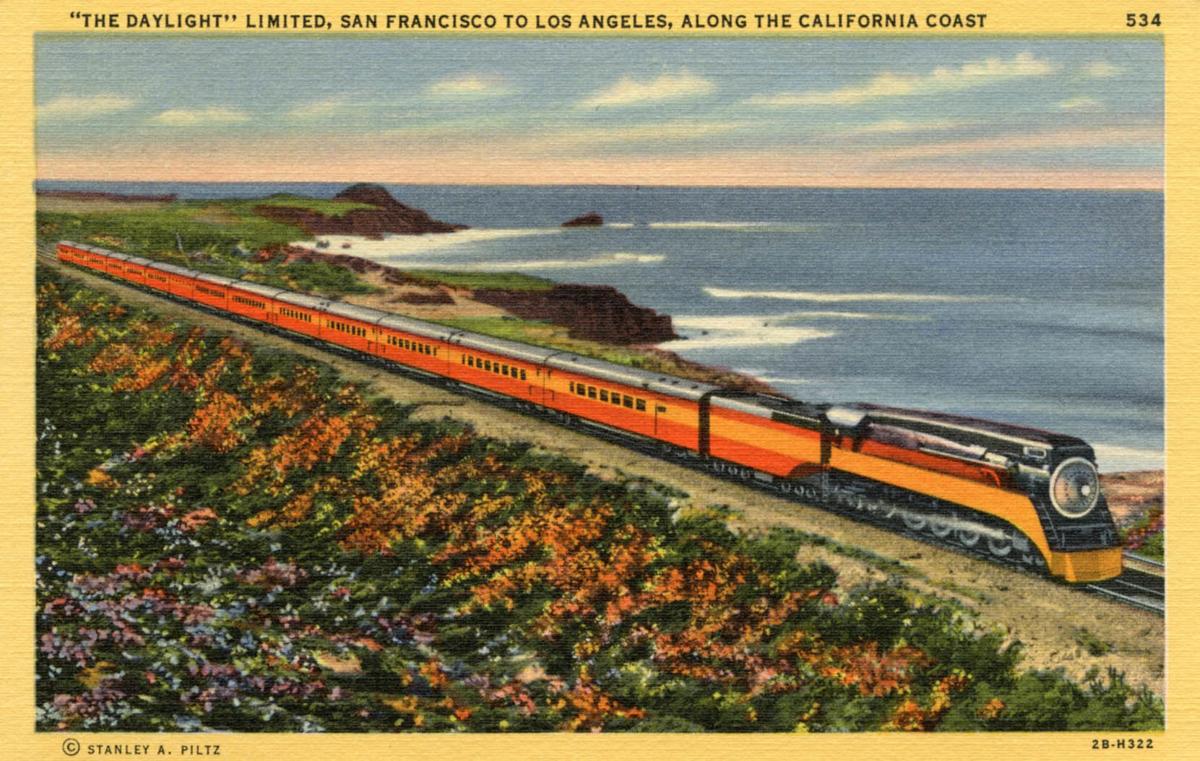 No. 7. A 1942 linen card showing the Southern Pacific Railroad’s “Daylight” train between California wildflowers and the Pacific Ocean.

A railroad-themed postcard on which the Robt. D. Patterson Stationery Co. ordered supplies from another company in 1885.

The cover of Trains’ 2020 release of 50 locomotive postcards in a boxed set.

A classic railroad scene from 1911, including a train, seven people, and a horse and buggy at the Northfield, Mass., station.

No. 7. A 1942 linen card showing the Southern Pacific Railroad’s “Daylight” train between California wildflowers and the Pacific Ocean.

Since I began collecting postcards in the 1980s, my favorite topic has been railroads: images of trains, especially passenger trains; depots; bridges; and other structures. I collect old cards and new.

Fifteen years later, that is no longer true. The internet and digital photography have changed things. In “The Rise and Fall of the Railroad Postcard” (Railroad Heritage, 2021:1), I summarized the history of cards in general and railroad cards in particular.

The development of postcards in the mid-19th century led businesses to use the communication advantages of postcards. Railroads, too, went for the cheap messaging – the email of its time – and for advertising their freight and passenger services. In the article, I traced the rise and fall of railroad postcards over 130 years, from the Robt. D. Patterson Stationery Co. using a railroad-themed postcard to order supplies in 1885 [CARD NO. 1], to Trains magazine’s 2020 release of 50-card boxes titled Legendary Locomotives Postcards: 50 Cards Featuring Vibrant Paint Schemes [CARD NO. 2]. Since then, Trains has released another box of 50 cards, this one titled Great Train Stations Postcards: 50 Cards Featuring Landmark Rail Terminals, but in the last several years, these are the only new rail postcards I remember seeing advertised.

Around 1905, the Rotograph Company was one of many publishers issuing cards of the New York Central’s 20th Century Limited train along the Hudson River [CARD NO. 3]. Alan Petrulis, writing in his wonderful www.metropostcard.com source, said, “By 1905, the collecting and sending of postcards had turned into a full-blown craze.”

Walter Stendel of Janesville, Wis., used this depot card [CARD NO. 4] on March 1, 1907, to ask the addressee to “Please Exchange Cards.” It was a common message at that time.

There were many reasons postcards became a “craze,” but the addition of images was a big one. “Postcards were also providing a snapshot into the world and its people in an age when the public had little access to pictures,” Petrulis wrote.

Black and white postcards weren’t near as popular as color cards, but sales in small markets weren’t high enough to justify the lithographic process. Today, Robert Bogdan and Todd Wesoleh say in their 2006 Real Photo Postcard Guide: The People’s Photography, “It is the small, out-of-the-way depots, the ones that were at the center of small-town life, that are the main subject of this collecting category.” [CARD NO. 5]

“Tangible proof that railroad stations – the grand and not-so-grand – were a cornerstone of North American life through the first half of the twentieth century survives in the form of postcards,” Kevin J. Holland says in his 2001 book Classic American Railroad Terminals. [CARD NO. 6]

The craze ended around 1915, but postcards continued to evolve. Linens became popular between 1930 and 1945, with vivid inks that were perfect for advertising colorful passenger trains. [CARD NO. 7] The Modern Chrome Era started in 1939 and continues today. But there are fewer new cards.

Amtrak and Via Rail Canada no longer sell postcards, and the major companies, such as Audio-Visual Designs and Mary Jayne’s Railroad Specialties that produced railroad cards have left the business. The good news is that individuals and small companies may still publish them, and there are millions of older rail cards still available to collectors through dealers and sellers online, at postcard shows (when they return after Covid), and through other private sources.

Railroad images appear in many places on the internet, this ease of viewing may have affected sales of old postcards. But rail cards had an excellent run, and that’s left us millions of beautiful and interesting cards to collect and enjoy.

To see cards up close, attend a postcard show and ask the dealers what they have in railroad cards. At home, use your computer search engine for “railroad postcards for sale” to bring up on your screen available cards from individuals and postcard dealers.

For more information on railroad postcards, my 9,000-word, 44-page article with 63 rail-card illustrations in Railroad Heritage, 2021:1, is available for $7.95 (postpaid within the United States) from the Center for Railroad Photography & Art at www.railphoto-art.org/publications.