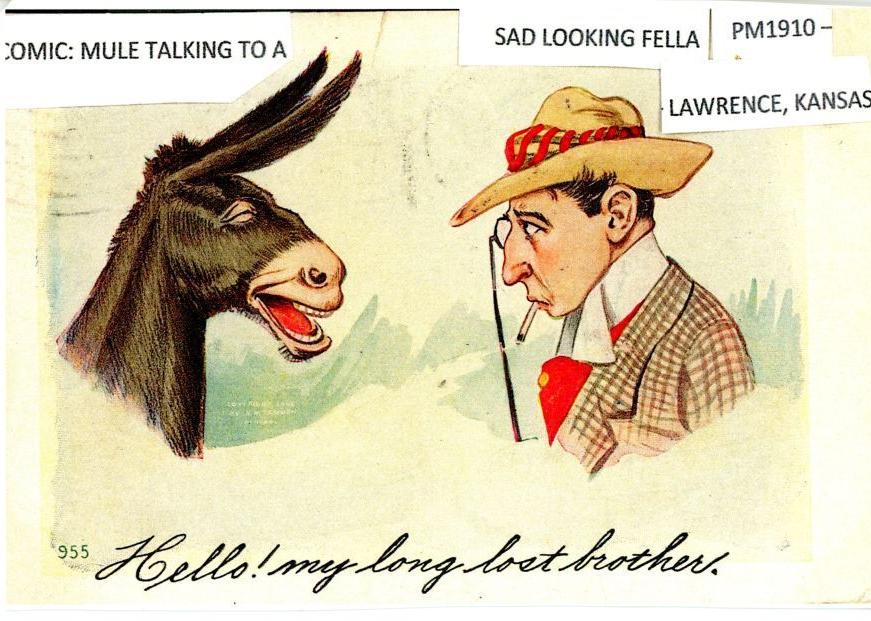 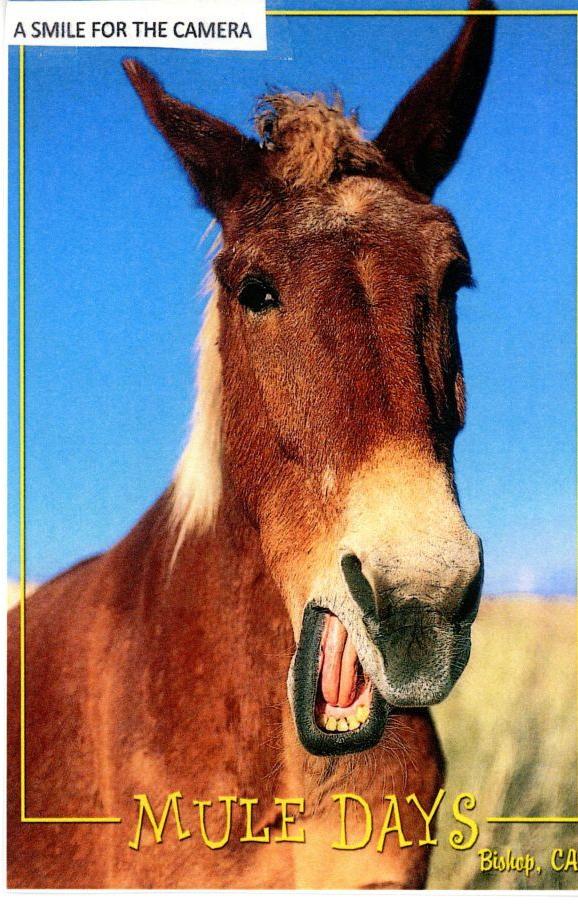 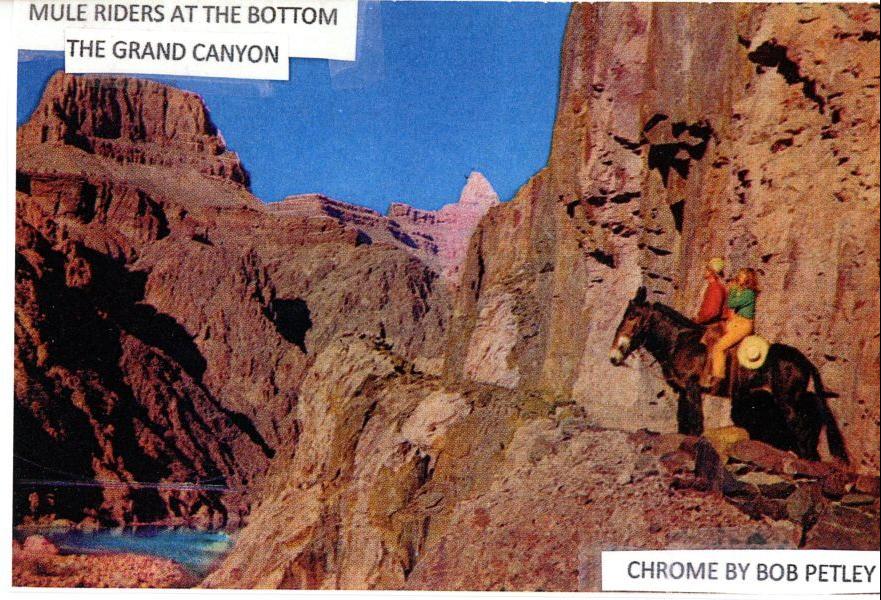 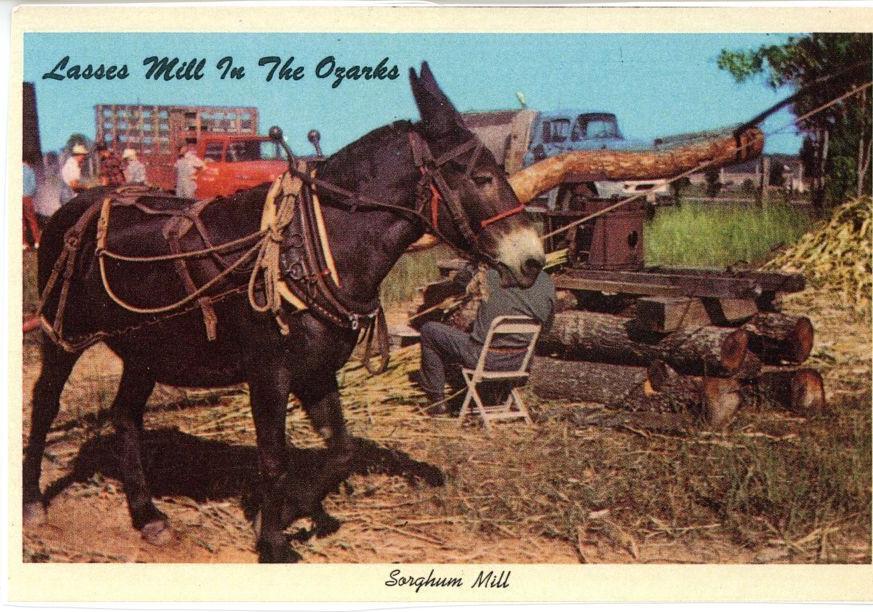 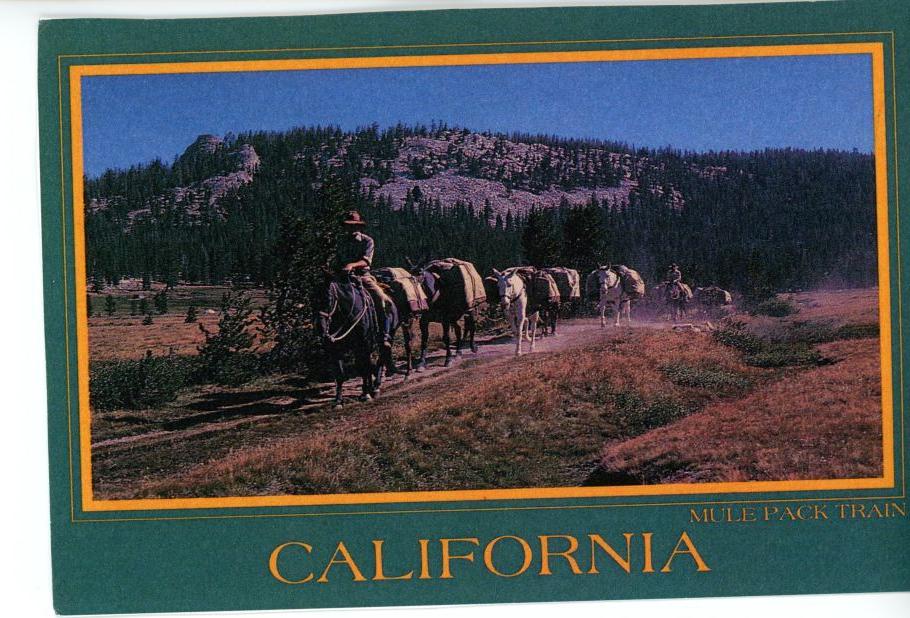 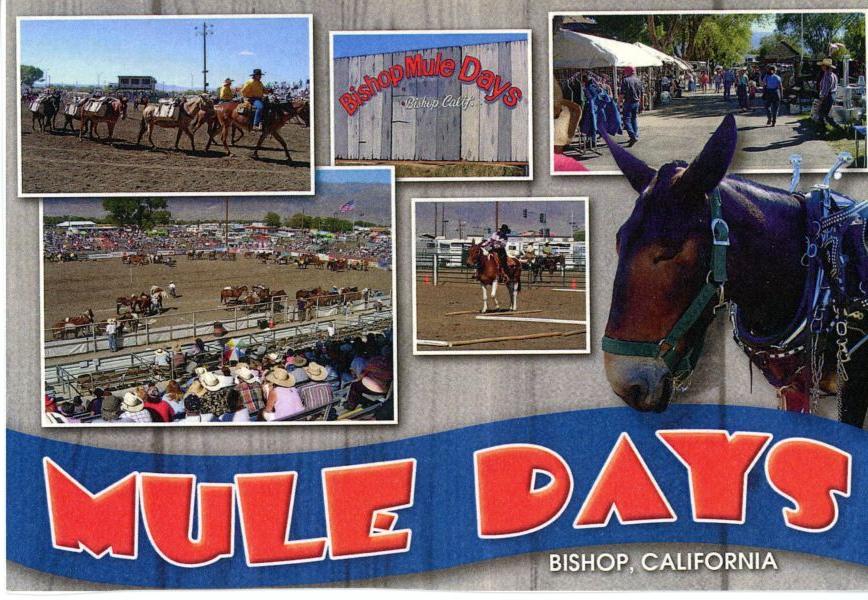 I collect horse postcards and other equine postcards and paper items. I have a separated category for both mules and donkeys. In years past, I owned a horse or two, but never a mule or donkey. However, it was easy to get interested in other equines, like the mule or donkey. The horse is a gallant, sharp and beautiful animal, especially when they are running free across an open range. However, even as they are so easy to admire, they aren’t alone in the equine field. I guess perhaps, the donkey and the mule do not always receive as much attention as they deserve, but all equine species. Have played an important role in the past and will in the future.

Mules are a hybrid, so therefore sterile. They’ve inherited the best qualities of both the horse and the donkey. They come in various sizes and colors, are intelligent and, of-course very persistent. Mules are safer and sure-footed on a steep narrow terrain, and capable to go longer without food or water, than a horse. They have sharp senses, which include good night vision, and a keen sense of smell. Their large floppy ears are not just for good looks, but provide them with excellent hearing, and they will stop on their own if they sense danger. They also have a longer life span than horses. They’re blessed by a variety of names such as, long-eared chuck wagon, prospector’s compass and Rocky Mountain Canary.

Not everyone is familiar with the various roles the mule has contributed to society. The most easily recognized and popular mule was the one named Ruth on the popular T.V. Show, Gunsmoke. Ken Curtis, known as Festus Haggen, began his role as Matt Dillon’s’ deputy sheriff in January 1964. Ken Curtis (real name – Curtis Wain Gates) served in WWII, from 1943-1945 and after being discharged, attended a Colorado College to study medicine. However, the career in medicine was cut short when he began singing with the Tommy Dorsey band. He was with them until 1949, when he joined the Sons of The Pioneers. His biggest hits with the group were “Room Full of Rosses” and “Ghost Riders in The Sky.” In 1952 he left the musical group when he was offered some acting/singing roles in movies. A few of his early singing/acting roles were in “Rio Grande,” “The Searchers” and “How the West was Won.”

Mules have contributed an important and necessary role in U.S. and World History. In WWI and WWII, there was a big demand for horses and mules by both the United States and British Armies. Mules especially were able to maneuver the war covered territory carrying heavy loads of supplies and equipment to the front lines. They were capable of enduring harsh circumstances, were smart and physically strong enough to carry heavy loads of supplies and equipment. The trucks and other motor vehicles would often get stuck in mud or breakdown and were noisy, where – as the mule would move quietly and steadily. Their natural ability to sense danger was also a great assist to the ground forces. The United States and Britain weren’t the only countries that utilized the mule during war time. Switzerland considered all mules as army personnel and they along with the young enlisted men were given serial numbers. The mules had their serial numbers branded on their hoofs.

A firm in southwest Missouri, named Guyton & Harrington, provided what appeared to be the best source for the non-ending need for horses and mules for the American, British and Swiss forces. The Guyton and Harrington stockyards reportedly sold 180,000 or more mules to the British Army from 1914-1918. Horses and mules were an essential part of life for troops during both WWI and WWII. The Mule is the U.S. Army Mascot as West Point and the state of Missouri adopted the mule as the official state animal. Representatives of the American Legion have testified that the mule is considered a veteran of foreign wars. Today, the conflicts in Afghanistan, have found the mule to be a helpful friend.

By the year 1920, the number of mules in the United States was believed to be around six million, however today, the number is estimated to be fewer that eight hundred thousand.

Like many animals, the history of America includes horses, mules, dogs, etc. George Washington, Father of the United States, liked mules and received his first mule as a gift, from the King of Spain. General George Crook, and Sam Houston also owned mules. Before the Pony Express – “Jackass Mail Service” was tried – but it obviously wasn’t very successful, and was replaced by the Pony Express, which in turn was replaced by the train.

Today the mule is still popular and has a lot of fans. One of the biggest celebrations with the mule being the honoree, is on Memorial Day weekend at Bishop, California. Every year since 1969, this California town on the Eastern slope of the Sierra Nevada Mountains, has a celebration that lasts for six days. The activities include, a big parade, mule races, chariot races, trail riding classifications, team roping and events for the entire family. There are hotels/motels and camping available, but best to make reservations ahead of time.

Mules still follow the familiar trails along the Grand Canyon, exposing tourists to beautiful rock and plant formations that one cannot view from the canyon rim. Mules are also used on trails in a variety of state and national parks. Riding stables or academies often use mules as a first mount for a beginning rider, and some dude ranches often prefer a mule when heading out for overnight camp outs.

Mule/donkey postcards can be filed under a variety of categories. I’ve found them behind horses, western/cowboy and rodeo, also comic, national parks and I always check the real photo categories. I’ve included some mule cards with this write-up. Hope you enjoy them and maybe think about adding a mule category (if you don’t have one) to your collection.