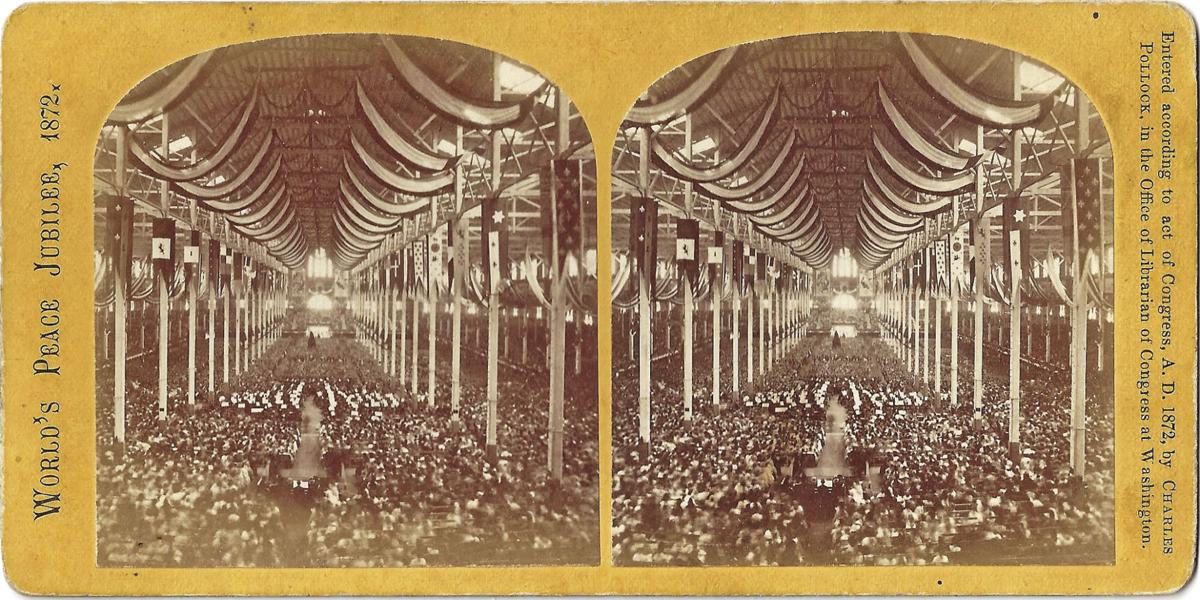 A rare factory interior – but not on a postcard. 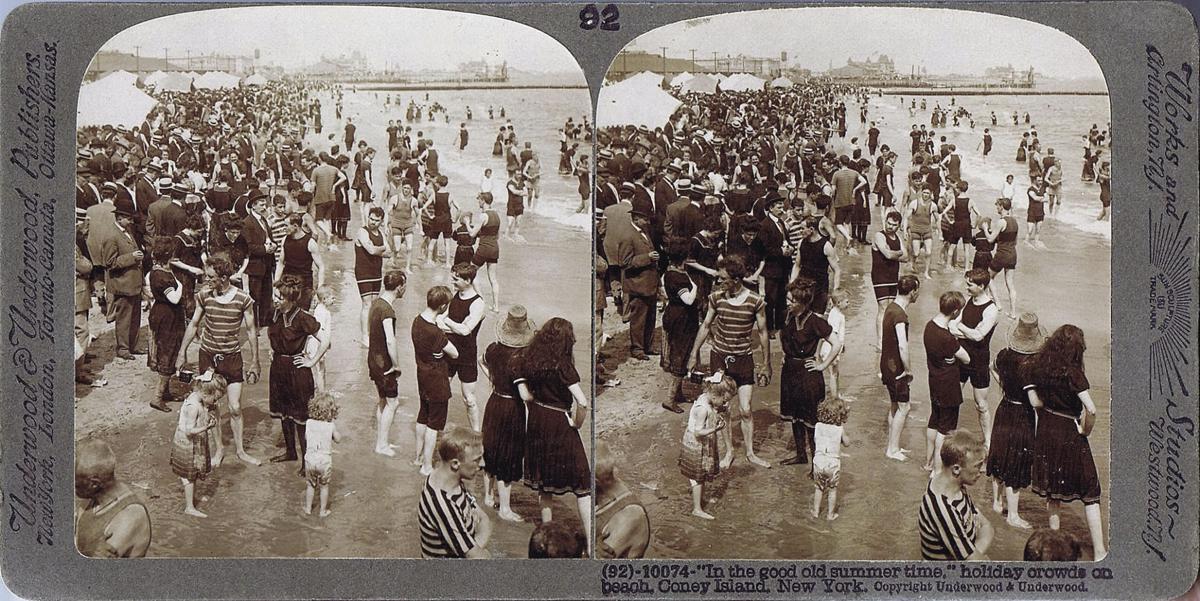 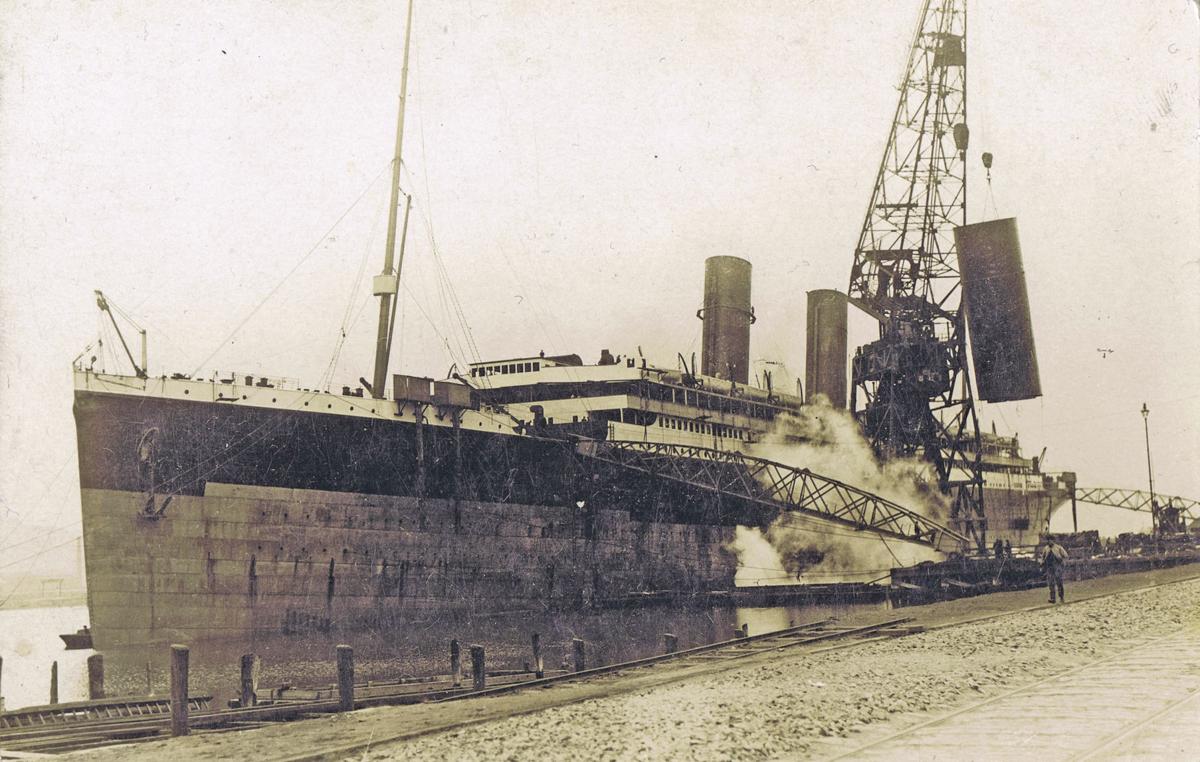 Yes it’s an RP postcard of putting a funnel on the Olympic – super rare in any format. 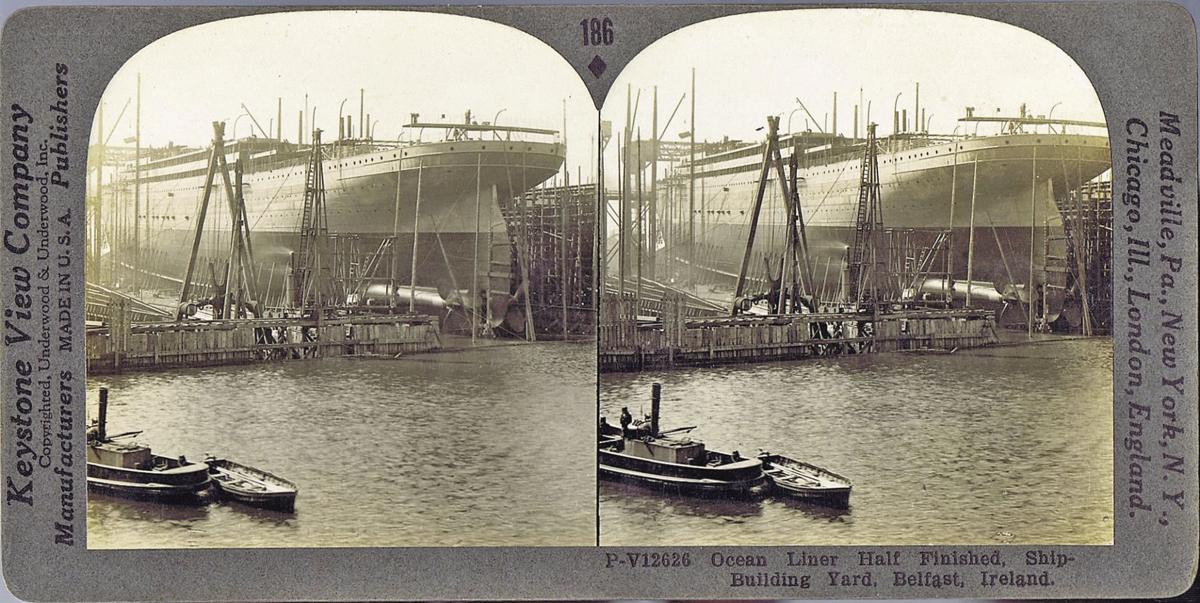 And here’s a crisp view of the Belfast shipyard in which Olympic and Titanic were built. 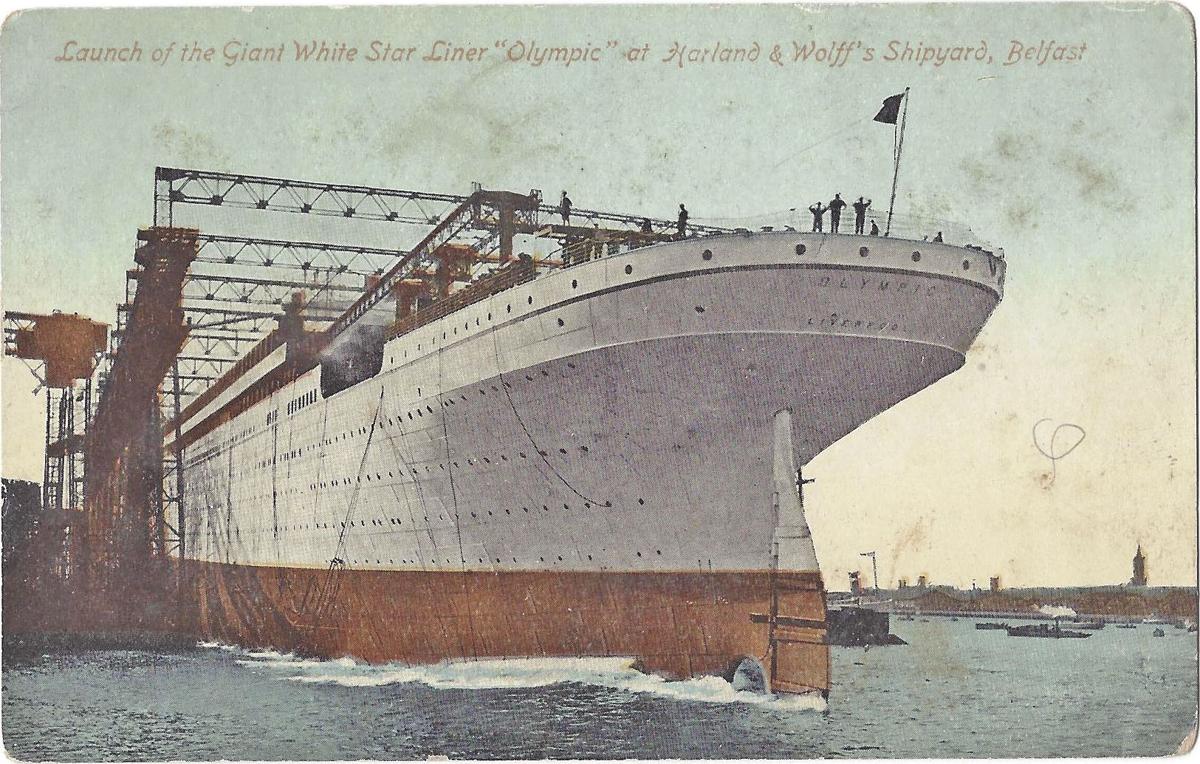 Another view of the Harland and Wolff yard – but on a postcard. 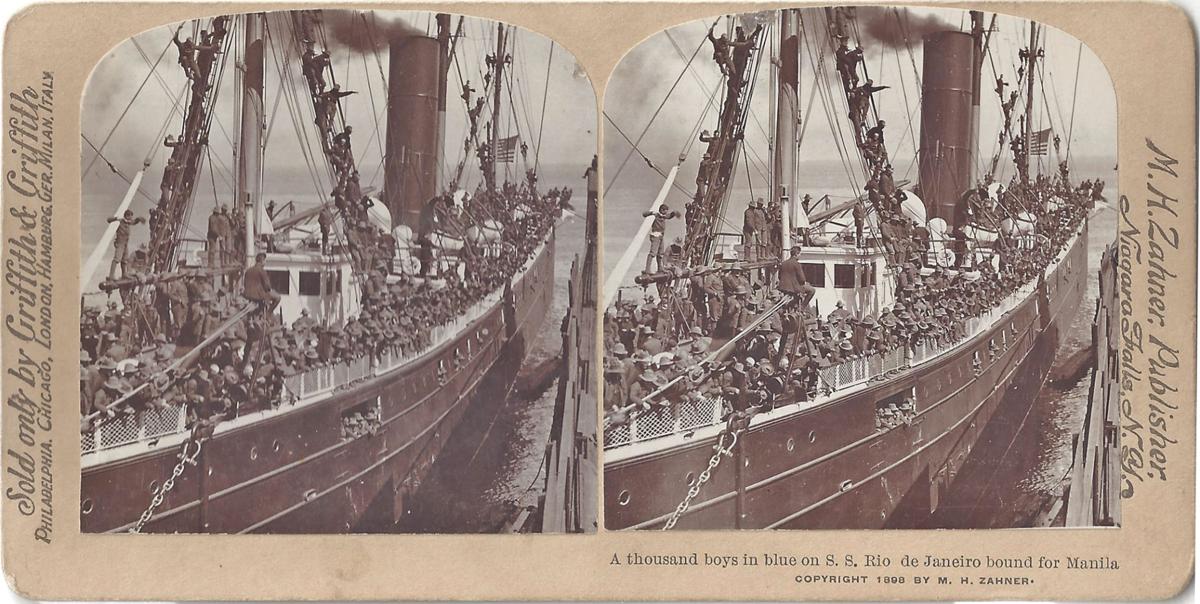 Ocean Liners at War – the Rio de Janiero trooping in 1898 – in stereo!

The USS Leviathan on trooping service. Great information on the back. 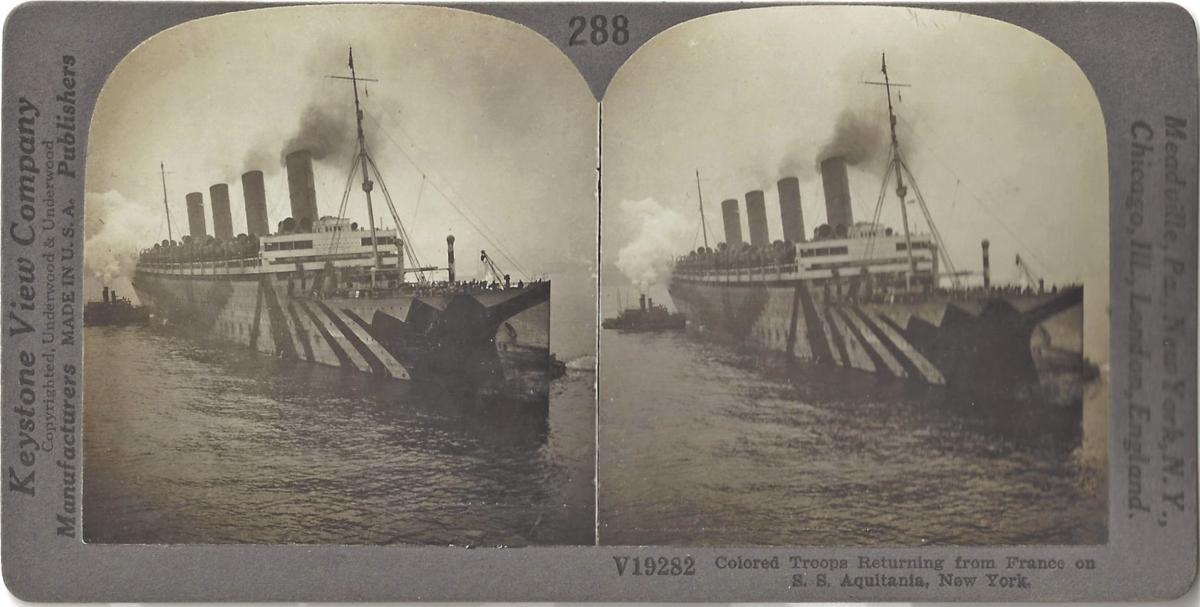 The Aquitania bringing colored soldiers back home – with a detailed story on the back. 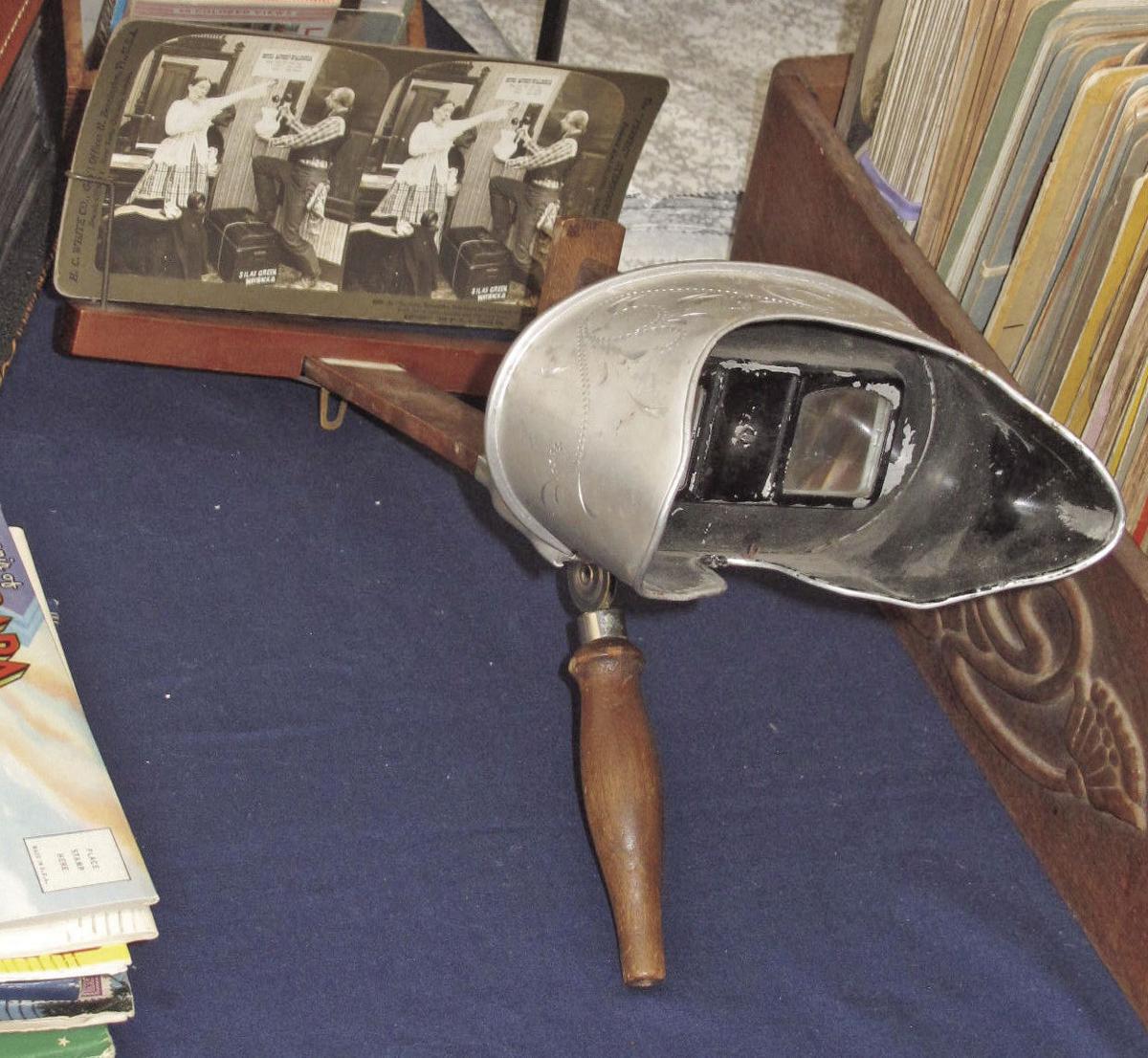 Just in case you have never seen a Stereo viewer here’s one of the types. 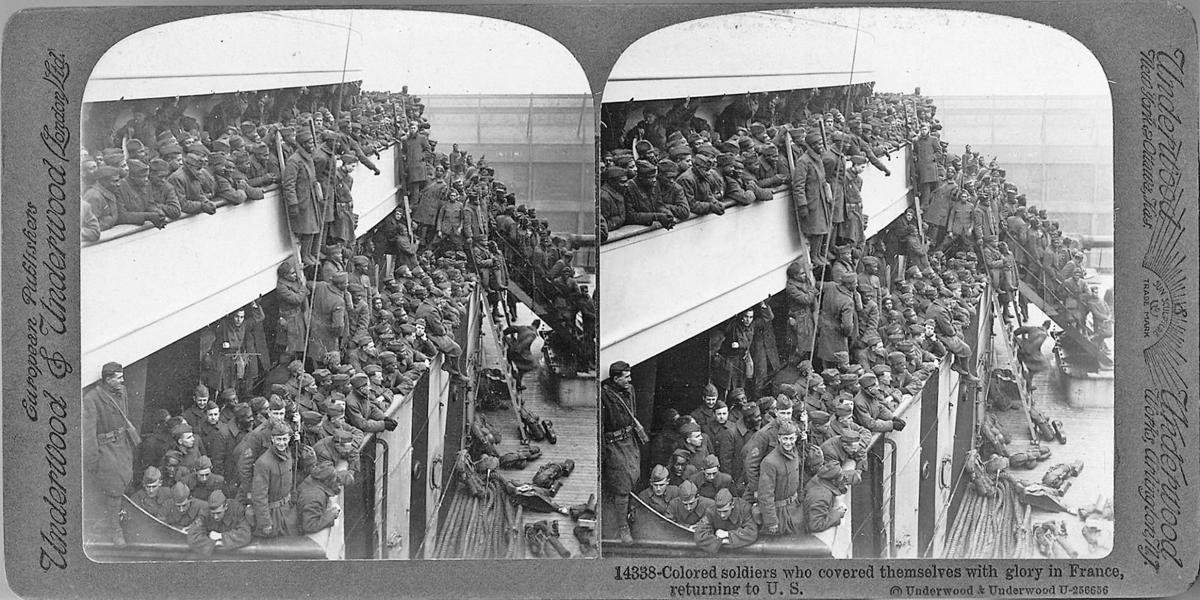 Colored troops on the Aquitania, mingling and sharing deck space with white soldiers.

A rare factory interior – but not on a postcard.

Yes it’s an RP postcard of putting a funnel on the Olympic – super rare in any format.

And here’s a crisp view of the Belfast shipyard in which Olympic and Titanic were built.

Another view of the Harland and Wolff yard – but on a postcard.

Ocean Liners at War – the Rio de Janiero trooping in 1898 – in stereo!

The USS Leviathan on trooping service. Great information on the back.

The Aquitania bringing colored soldiers back home – with a detailed story on the back.

Just in case you have never seen a Stereo viewer here’s one of the types.

Colored troops on the Aquitania, mingling and sharing deck space with white soldiers.

Stereo View cards have a bad reputation with some dealers – and many collectors. A lot of Stereo View Cards are – to be kind – pretty boring. Still shots of historical buildings of the Middle East, for example, fade into insignificance compared to film records made in the 20th Century. But there is hope for the collector! Keep reading.

Geographic views with tinted color enhancements are just not worth buying unless you’re doing a ‘before and after’ record - or your postcards don’t go back as far as the Stereo views. A good example is the 1872 View Card of the Boston Coliseum, site of the World’s Peace Jubilee of that same year (Figure 1). Not tinted, but a very crisp photograph for its era.

So I have to confess that for what I would call ‘events’ these cards can be a great enhancement to a postcard collection. Even for the manufacturers such as Underwood and Underwood of New York there was a distinct link between images for Stereo View cards and postcards, and that firm produced both.

The photographic images on the ‘better’ Stereo cards are as good as – or better than – many ‘Real Photo’ post cards. Yes, I’m a postcard guy, but I couldn’t resist purchasing, for a few dollars each, a group of Stereos of factory interiors. Look at Figure 2, Foster Winding in the Assobat Woolen Mills. It’s not only a treat as a clear photo, it’s an INTERIOR! And how many manufacturing plant (or retail store, or mining) interiors does one find on early postcards? Not many.

This illustration also shows the workers, unlike many images that one finds. It may have been ‘posed’ but we see what the (women) workers wore at their machines and a male foreman overseeing the women. Safety issues are highlighted in images such as this. The voluminous sleeves on the dresses should never be worn in a setting where there are whirring machines that could catch loose fabric, but fashion and standards of modesty probably overrode that risk.

A plus on several of these cards is that there is a useful description on the back. Unlike a postcard, they didn’t need to leave a space for a mailing address. One of the cards describes on the back the advantages of mechanization, which permits the employer to hire cheaper, and less skilled, women and children. I’m going to withhold social commentary on this comment!

Figure 3, showing ‘Holiday Crowds on the Beach, Coney Island New York’ provides a marvelous, crisp view of bathing and other summertime attire. There is no commentary on the back, but none is needed. The crowds and the postures (particularly the woman in front, arms akimbo, with two small children) provide a good insight to the atmosphere.

Readers of some of my previous articles in Barr’s will know that I am at heart an Ocean Liner postcard guy. There are some great cards out there, such as a Real Photo card (Figure 4) of hoisting the funnel on the Olympic. Equally enticing is the Keystone View Company’s Stereo card of ‘Ocean Liner Half-Finished. Shipbuilding Yard, Belfast, Ireland” Figure 5). Copyright credit is given to Underwood & Underwood. On the back, it explains that “In good times the two big shipyards in Belfast employ nearly thirty thousand men. Jointly they have twenty-seven permanent shipways.”

Two Belfast shipyards? The only one that springs to mind is Harland and Wolff, builders of the Titanic and all other legendary White Star Line ships. Apparently, the other company was named Workman, Clark & Co., much lesser known but its output exceeded that of Harland & Wolff. However, the latter is better known because of its connection to Titanic and her sister ships Olympic and Britannic. This ship is BIG, but which of the sisters is it? There are similar postcard views for the Olympic (Figure 6) but there is nothing on the Stereo card to provide a date, so we probably can’t narrow it down any further.

A favorite Ocean Liner topic is Ocean Liners at War, and Stereo View Cards have provided me with images that I have not found on postcards. Figure 7, “A Thousand Boys in Blue on SS Rio de Janiero Bound for Manila” tells me that this was probably in 1898 when the Battle of Manila was fought. This is confirmed by the copyright date – 1898. You can’t get a better early photographic image of Ocean Liners at war than this one in any format!

And then there was the First World War, and ocean liners again played a large part in the movement of American troops. Figure 8, “U.S. Transport Leviathan formerly the [German] Vaterland, largest ship afloat” carries useful contemporary commentary on the back that I would not get on any postcard. In terms of size, she had “…a length of 920 feet, almost as great as the height of the Eiffel Tower in Paris”. It goes on to explain that “…she is capable of carrying more than 14,000 soldiers and officers”.

Figure 9 is even more specialized. It depicts “Colored troops returning from France on SS Aquitania, New York”. I don’t have enough information to determine whether this card was sold as a single item, or whether it was part of a set. It is numbered in the upper center as number 288, which would be an enormous set. In either case, it suggests that there was considerable public interest in the role of African-Americans in the First World War. It’s highly unlikely that Keystone produced views that they didn’t expect to sell.

No postcard would give me the information that this card has on the back. The person viewing the image would read the information on the back before inserting it in his or her viewer (Figure 10). They would learn that “One complete combat division (the 92nd) … … occupied a defensive sector in the Vosges Mountains for three weeks in September 1918 and then took part for a few days in the Meuse-Argonne Offensive…” It refers also to “the 93rd Division, also colored”. There is even more information on the back of this card with the beautiful image of the Aquitania in Dazzle Paint.

There are other Stereo cards depicting African-American soldiers, such as Figure 11 which has no information on the back but is captioned “Colored soldiers who covered themselves with glory in France returning to U.S.” We know that there are controversies about the role that ‘colored’ soldiers played in the First World War but these and other Stereo cards show, particularly in this photograph, that they appear to be intermingled on the decks of the ship with white soldiers. And what a great photographic image! I have a lot more First War postcards than I have of Stereo cards of the era, but I certainly do not have views such as those in Figure 11 among my postcards.

So the conclusion that I have drawn from this, as a postcard guy, is that I can enhance my historical understanding of a subject by adding other ephemera such as Stereo View Cards to the subjects of my collection. I hope I’m not the only person who thinks this way!