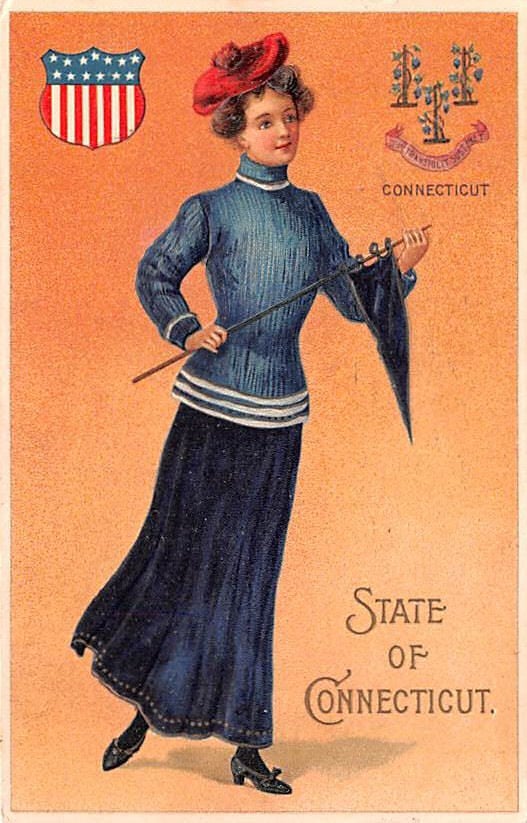 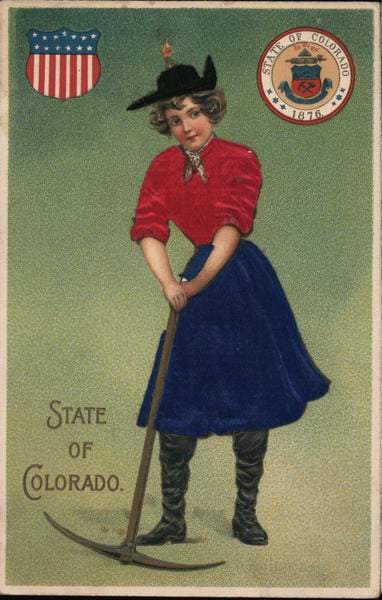 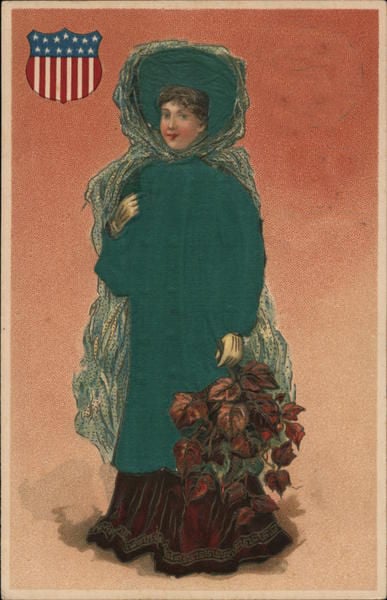 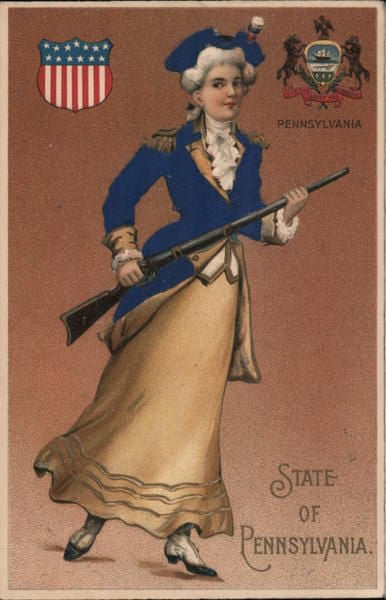 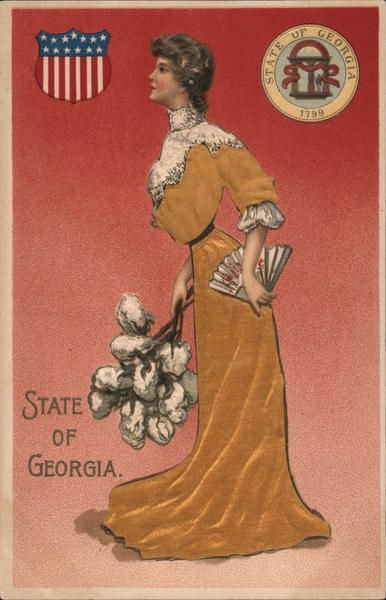 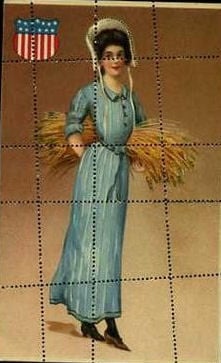 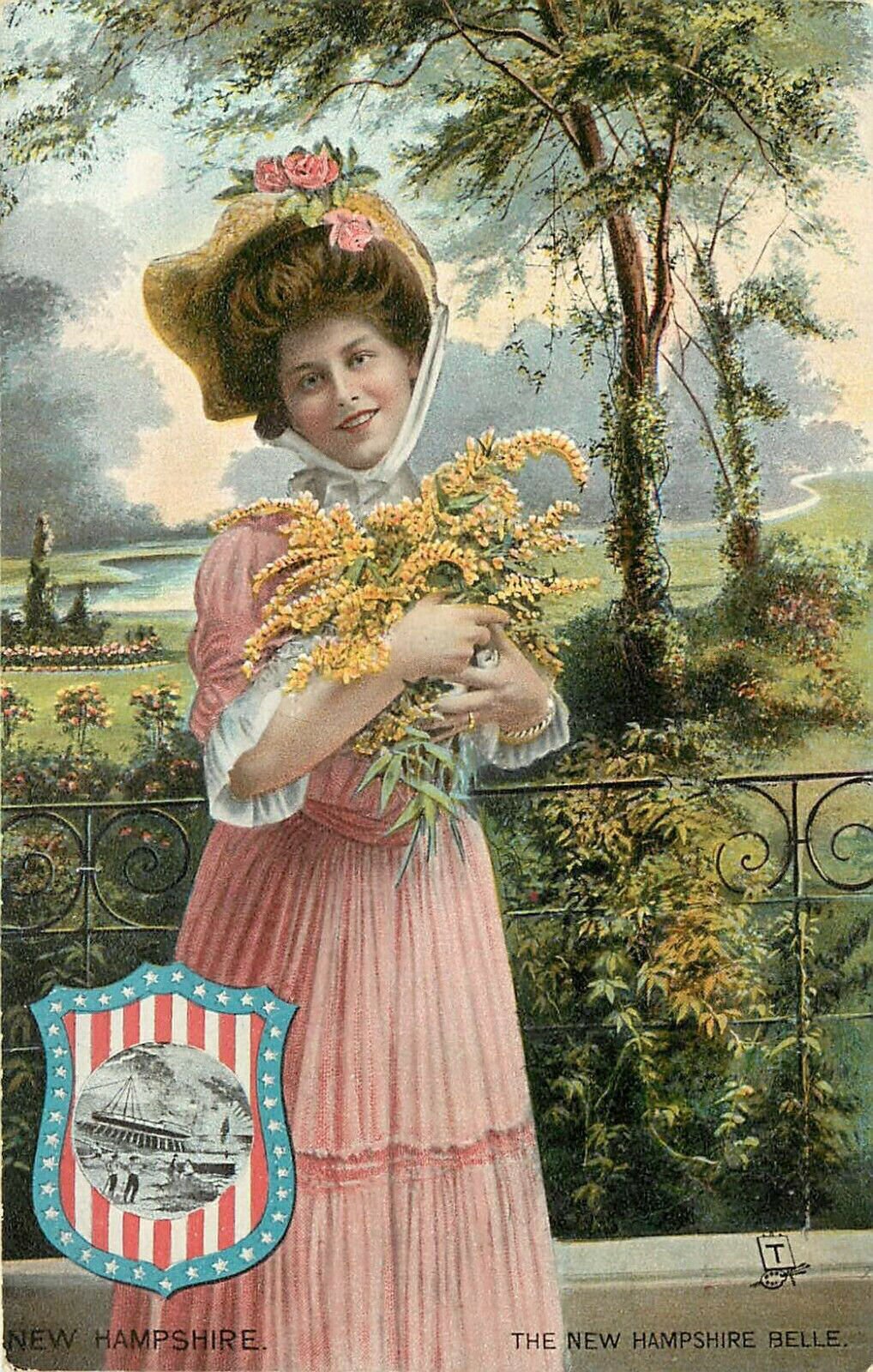 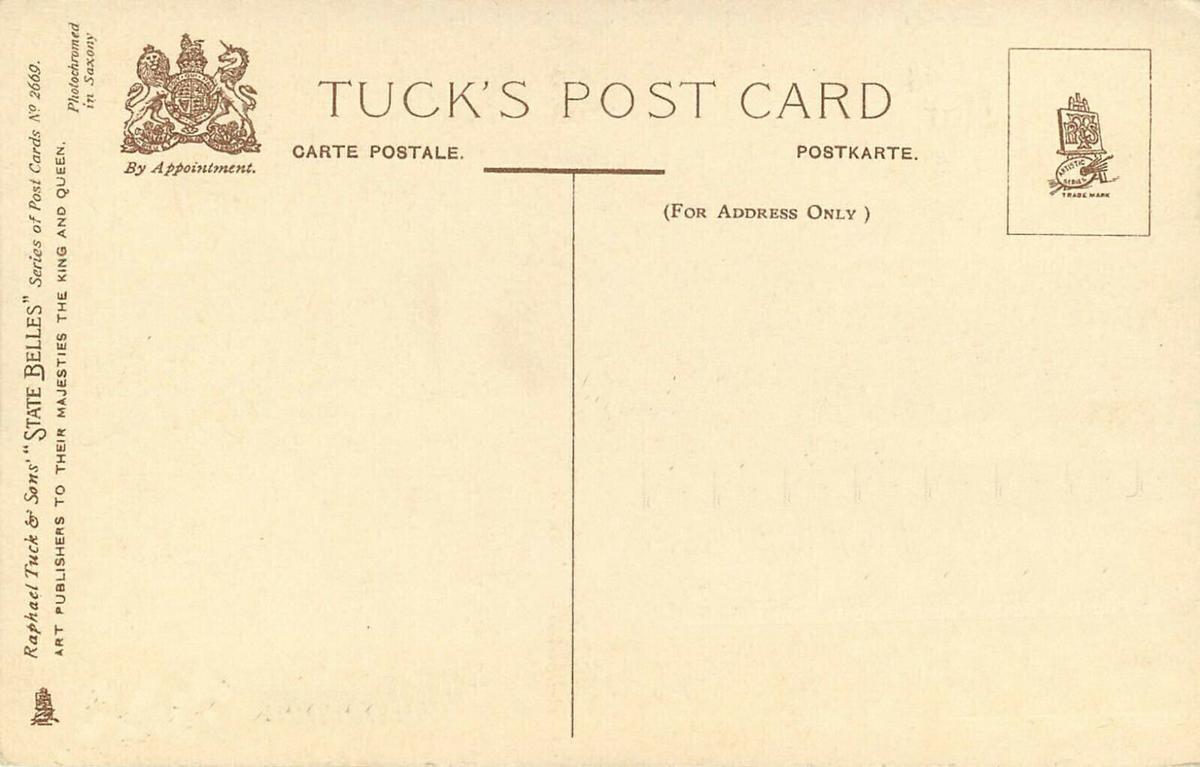 Perhaps no group of State Girl postcards found more favor among collectors over the years than did those published by Samuel Langsdorf & Company of New York. Langsdorf’s initial series of State Girls consisted of thirty flat printed divided back postcards that were designed in the United States, but which were printed in Germany. The number of cards printed for each state was in proportion to that state’s size and population. Therefore, cards for the smaller states like Connecticut (Figure #1) and the less populated states like Colorado (Figure #2) were the hardest to acquire.

Like the State Girls published by the National Art Company, each Langsdorf card featured a full-length young woman costumed in state appropriate apparel against a solid-colored background. Each girl shared the card with the Union Shield of the United States and the respective state name and state coat of arms. However, unlike the National Art Company series, the state coat of arms on the Langsdorf cards appeared in the upper right-hand corner of the card and not the lower right-hand corner. There are some Langsdorf State Girl postcards, like this one from Vermont, that are known to be missing both the state coat of arms and the state name (Figure #3).

The initial offering of the Langsdorf State Girl postcards proved to be so popular that three different variations of the original cards were produced. The first variation was identical to the original flat-printed cards except that these cards featured embossed figures. For the second variation, small appliques of silk were added to each girl’s costume giving these cards a three-dimensional appearance such as these cards from Pennsylvania (Figure #4) and Georgia (Figure #5). The third variation is both the most creative and the rarest. For this variation, the original flat-printed card was scored and then partially perforated. These cards were sold together with an envelope as a jigsaw puzzle postcard. The idea was that the sender would write a message on the back of the card then cut the card along the indicated lines and separate the pieces. The pieces of the postcard would then be put in the accompanying envelope and mailed. In order to read the message, the recipient would have to reassemble the card (Figure #6).

Contemporaneous with the three series of State Girl postcards produced by American publishers was a set of State Belles offered by Raphael Tuck and Sons (series 2669). The backside of such a card is shown in Figure #7. These photochromes used real models posed against studio backgrounds and were extremely attractive (Figure #8).

Of the State Girl postcards, the Langsdorf jigsaw puzzle cards are by far the most expensive. If you can find one, it will cost you about $150 (120 Euros) or more. A silk Langsdorf sells for $50 to $100 (40-80 Euros). Depending on condition, the scarcer Langsdorf State Girls sell for $35 to $50 (27-40 Euros), while the more common cards will cost from $20 to $30 a piece (16-24 Euros). Be advised that there are many reproductions on the market at the moment. The Tuck State Belles sell for $10 to $20 each (8-16 Euros) in the United States and are somewhat cheaper in Europe. A Platinachrome or a National Art Company State Girl will cost in the range of $7 to $15 (5-12 Euros). One thing is for sure, a State Girl, particularly a Langsdorf State Girl, in top condition is an excellent postcard investment. Until next time, good health, stay safe and good hunting.