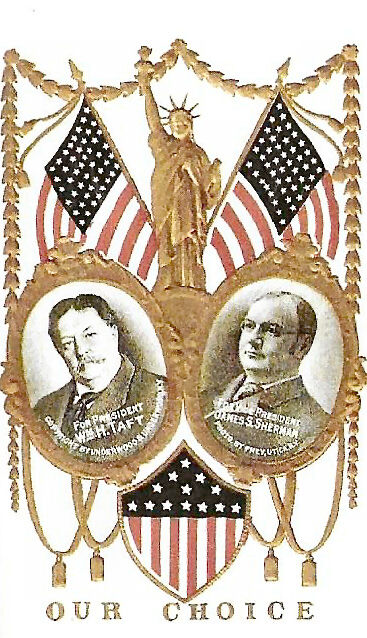 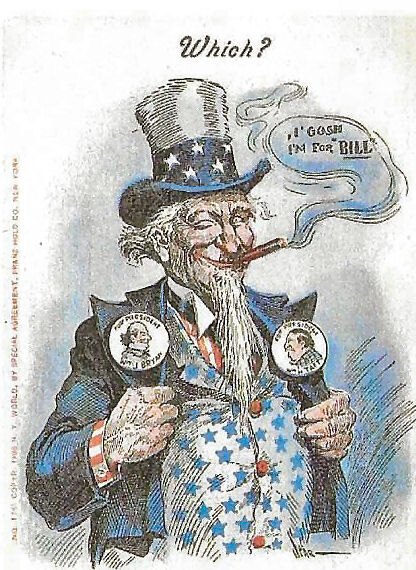 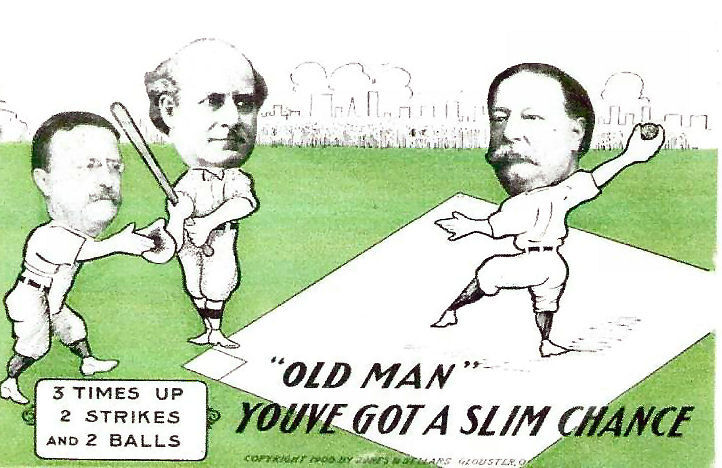 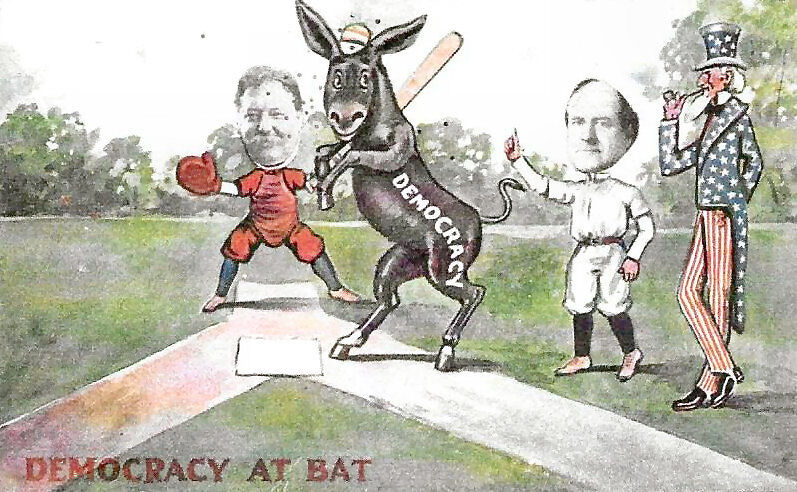 Every four years, citizens gather from all corners of the United States to observe a quadrennial activity that rivals anything ever produced in ancient Rome’s Circus Maximus.  No, it is not the Olympics or the World Cup, although it is a great game of sorts.  It is America’s Presidential elections, and for over a century, postcards have played a vital role in these celebrations.

At the turn of the 20th century, privately printed picture postcards were just beginning to become popular in the United States.  It is therefore not surprising that for the Presidential election of 1900, which pitted Republican incumbent William McKinley against Democrat William Jennings Bryan, only five different campaign postcards are known to exist.  Two Private Mailing Cards, each picturing one of the two candidates, were produced by Fred Braendle of Washington, D.C.  Two additional cards, one for each candidate, were produced by Franz Zorn.  The fifth card, also a Private Mailing Card (Figure #1), was published by Arthur Strauss, Inc. of New York, showing President McKinley and his Vice-Presidential nominee, Theodore Roosevelt.  The ticket of McKinley/Roosevelt carried the day, but within seven months of his second inauguration, McKinley would die at the hands of the assassin Leon Czoigosz and Theodore Roosevelt at the age of forty two would become the United States’ youngest President.

By 1908, America was squarely in the middle of the Golden Era of the postcard.  That year, the country’s hunger for cards was fed by a proliferation of campaign postcards featuring well over one hundred different designs.  In the 1908 battle for the Presidency, the Republicans fielded the ticket of William H. Taft for President and James S. Sherman for Vice President.  The Democrats countered with their own ticket of William J. Bryan and John W. Kern.  Figure #2 shows a typical postcard from that campaign.  The card is embossed in a red, white, blue and gold motif replete with illustrated patriotic symbols of America.  To this background were added real photographic images of both Taft and Sherman.  The jugate design, one in which the two candidate’s portraits appear side-by-side, was extremely popular as demonstrated by the large number of publishers who employed it

Never ones to allow an interesting coincidence to go unexploited, several postcard makers manufactured cards based on the theme that in the 1908 election the first name of both Presidential candidates was William.  Figure #3 shows such a card.  Produced by the Franz Huld Co. of New York, a smiling Uncle Sam is pictured wearing matching campaign buttons, one for William Taft, the other for William Bryan.  When asked which candidate he intended to support, Uncle Sam replied, “BY GOSH I’M FOR BILL.”  Even back then, political correctness reigned supreme.

Some publishers choose to pair the political candidates with America’s favorite pastime, baseball.  The card in Figure #4 was produced by I. Grollman of Chicago.  On the card, Republican William Taft is pictured as the catcher and his running mate James Sherman appears as the umpire.  While Uncle Sam looks on, the Democratic donkey steps into the batter’s box looking for a hit.  Another card in this series shows the donkey as he crosses home plate after hitting a home run.  Grollman also published a similar pair of illustrated postcards on which the Republican elephant was featured as the batter and the Democratic candidates were the other players.

Figure #5 is another 1908 baseball/campaign postcard, this one published by Jones & Sellars of Glouster, Ohio.  On this card, William Taft is the pitcher and former Republican President Theodore Roosevelt is the catcher.  Democrat William Jennings Bryan stands with bat in hand awaiting Taft’s pitch.  The captions, “Old Man You’ve Got a Slim Chance”, and “3 Times ups, 2 Strikes”, refer to Bryan’s two previous Presidential campaign losses to William McKinley in 1896 and in 1900, and to his long shot hope of victory over Taft in the 1908 election.  Postscript: Bryan ultimately struck out, losing the 1908 campaign to Taft.  After that loss, Bryan would never again seek the office of President.