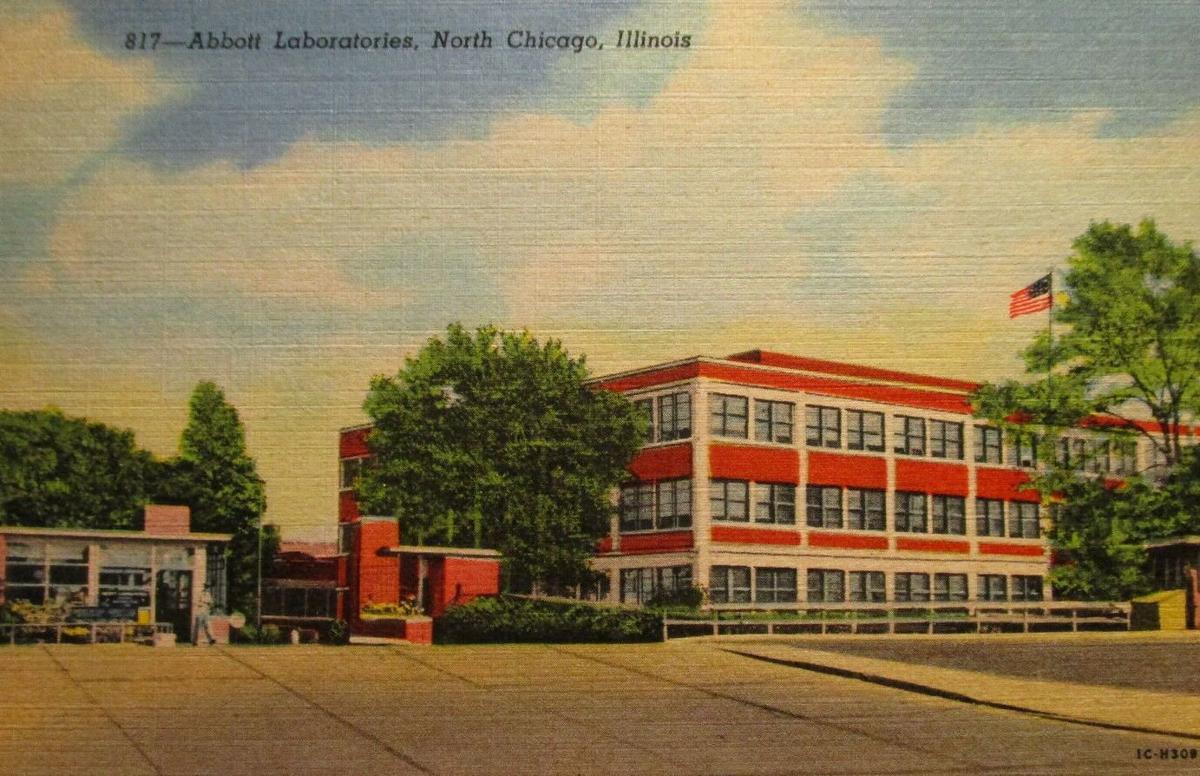 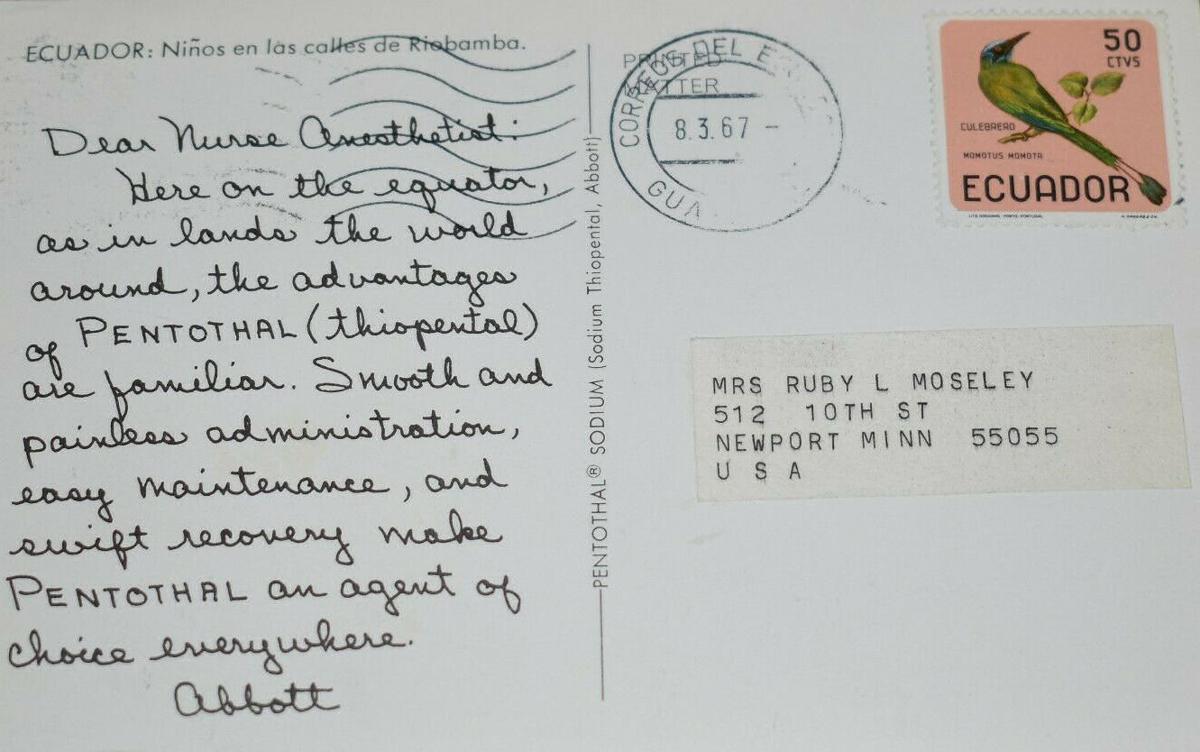 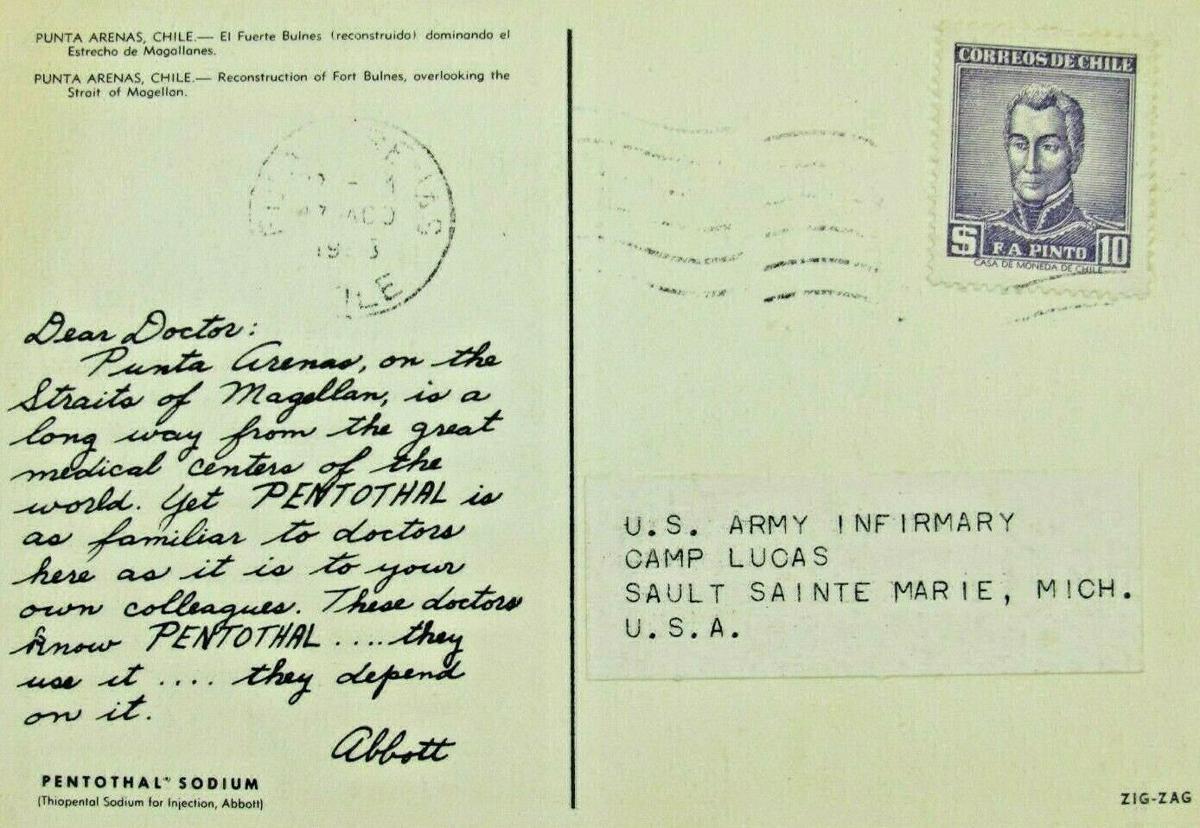 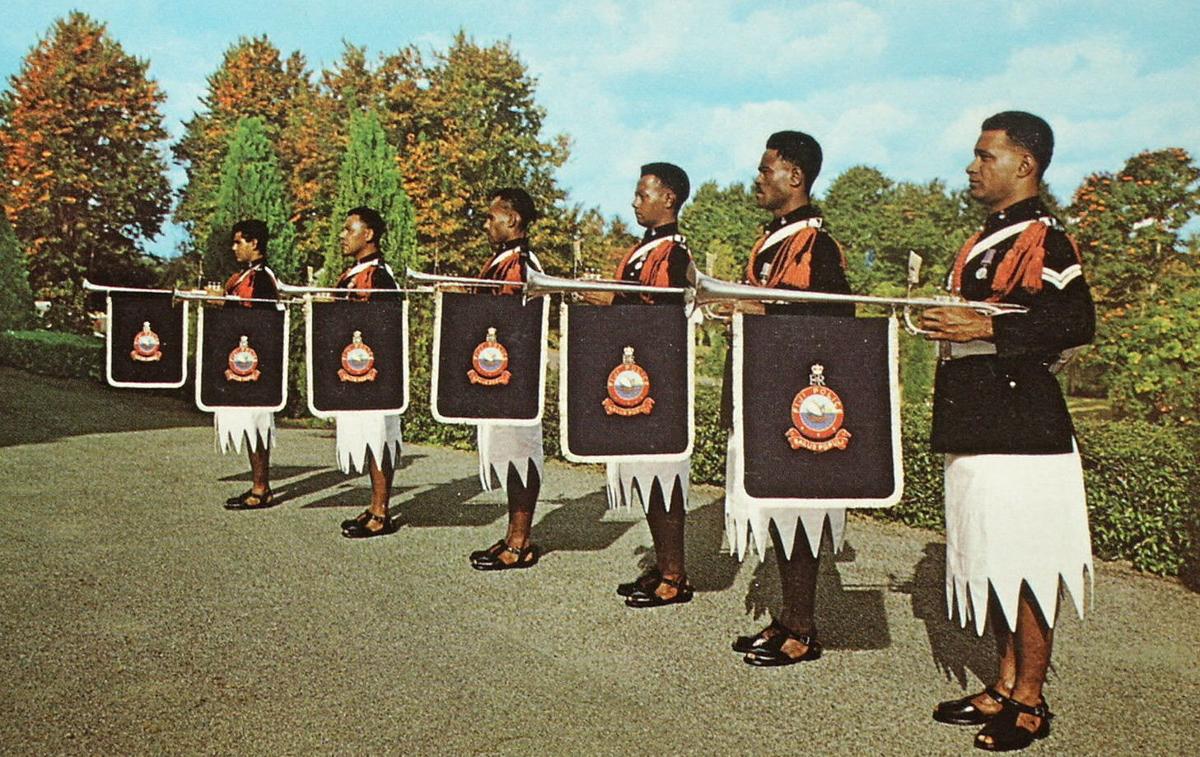 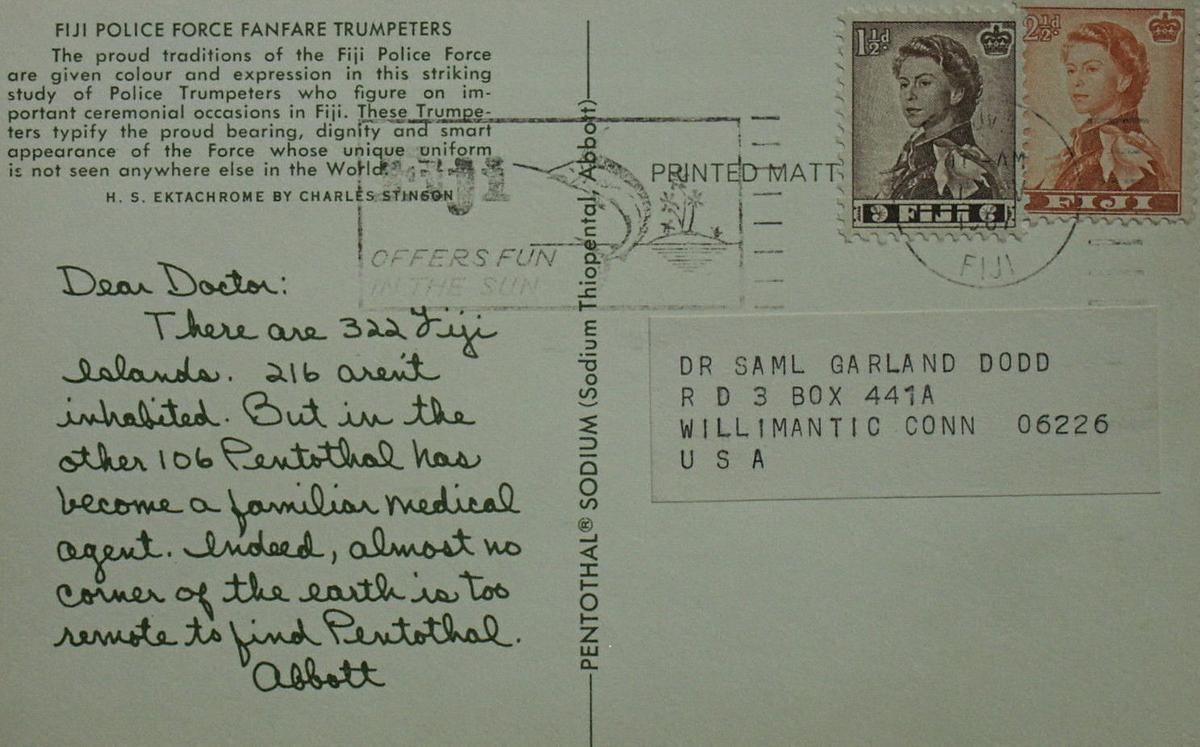 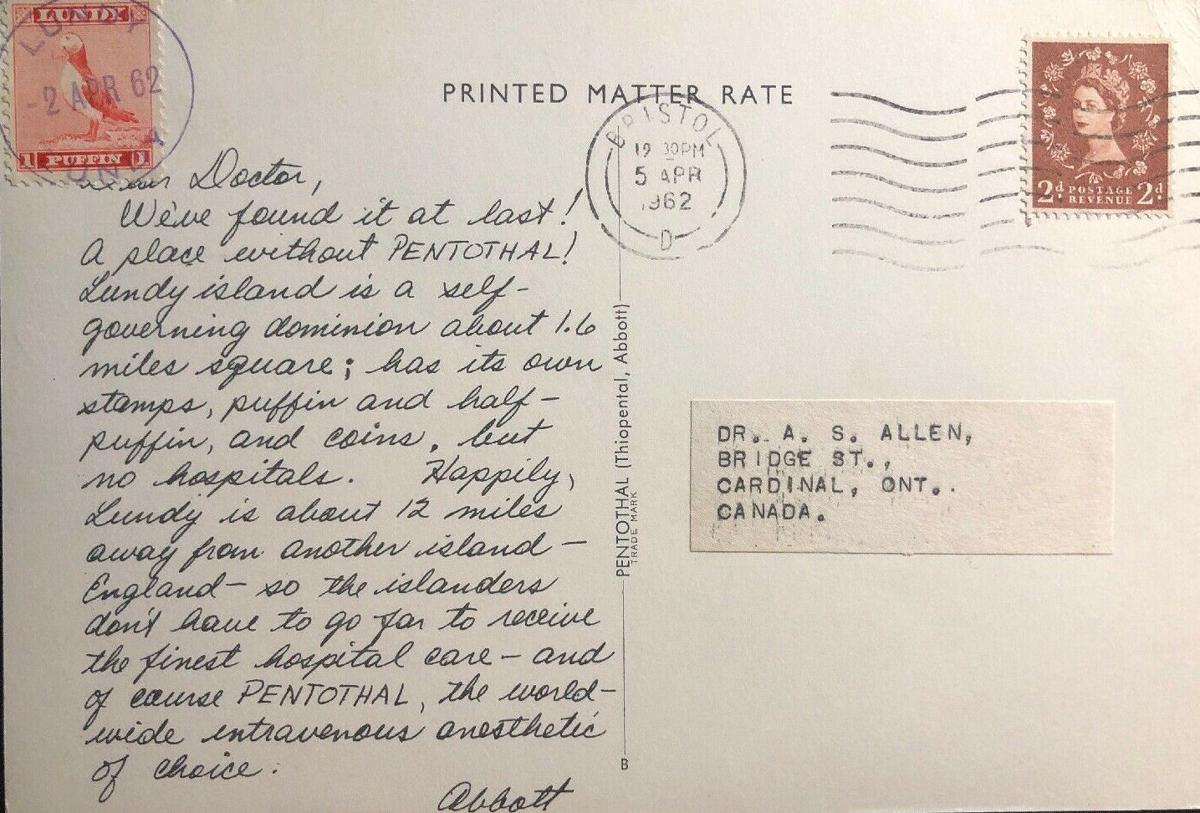 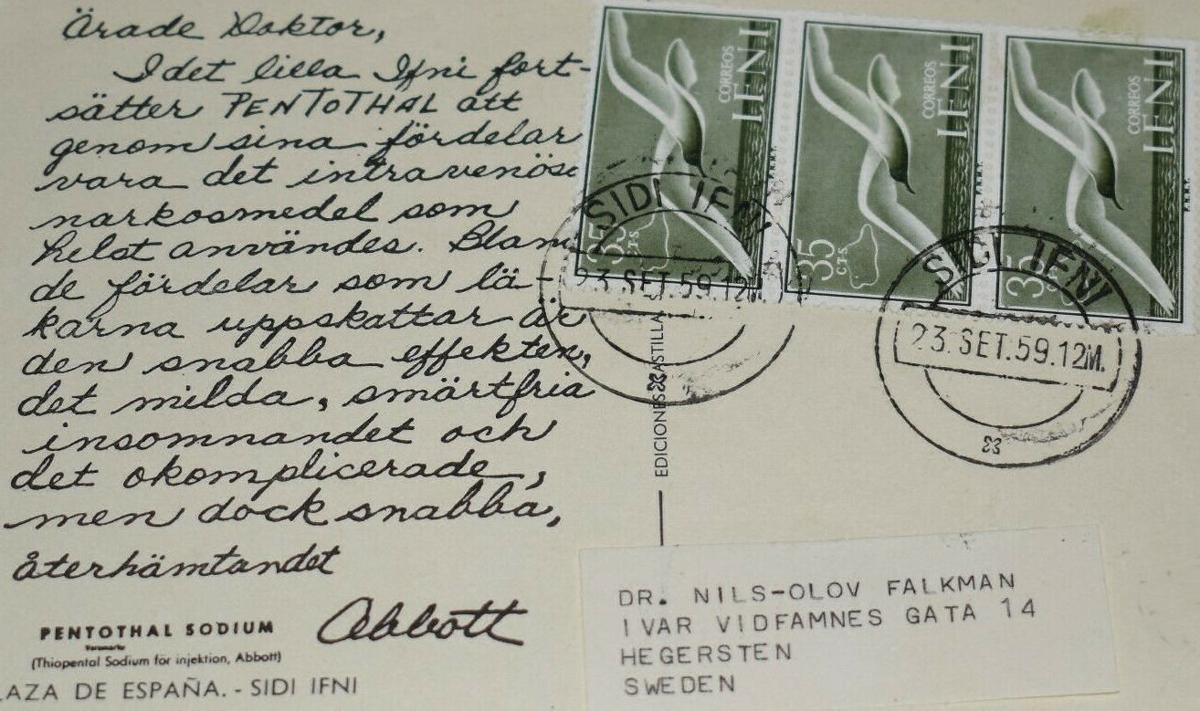 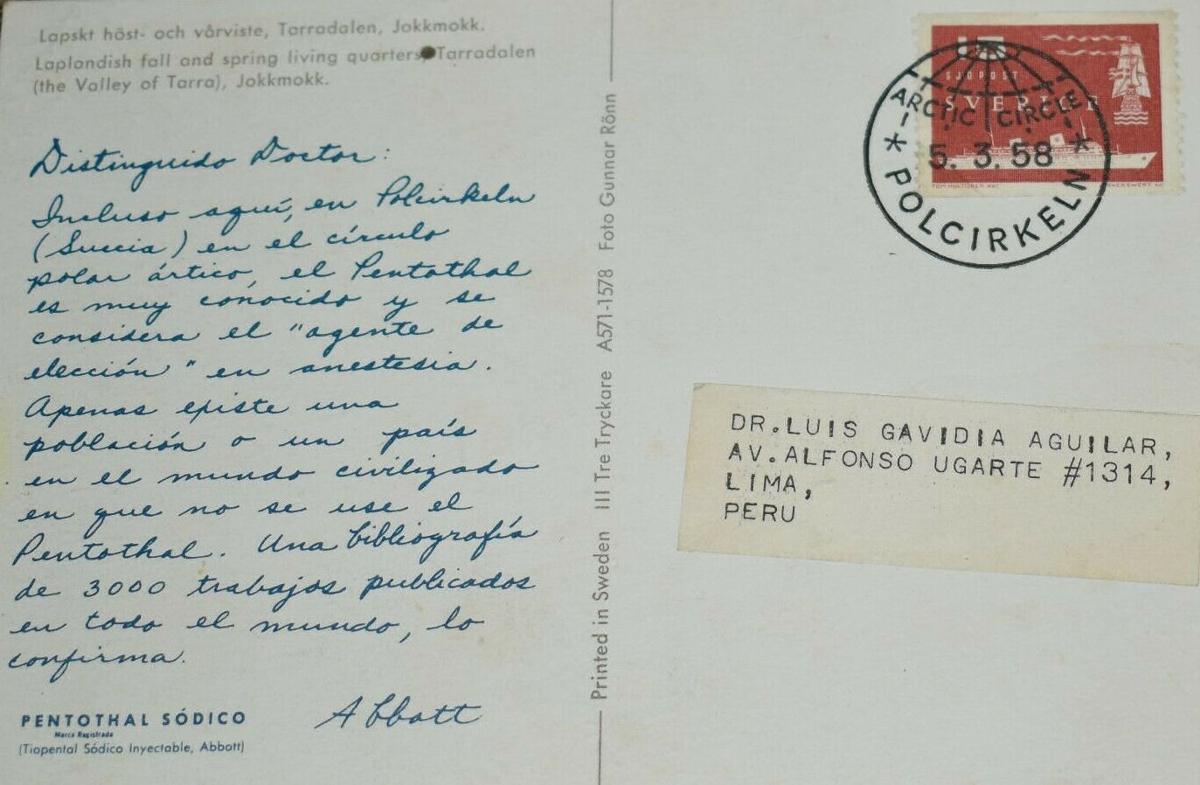 April 6, 2020, 6 PM; White House televised briefing. Subject: corona virus update. President Donald Trump announced, “I want to thank Abbott Laboratories for their fantastic work. Abbott has developed an ultrafast fast 5-minute test to determine if an individual was carrying the corona virus. Prior to Abbott perfecting this testing method, people had to wait days or longer to learn if they were suffering from the corona virus disease.”

Now you may be thinking that this was great news but what does it have to do with postcards? Abbott Laboratories is what it has to do with postcards. Prior to international televised news coverage, Abbott had to find other ways in which to inform the world about their developments and products. One of the most creative avenues for conveying that information was through Dear Doctor postcards.

Abbott Laboratories was founded in 1888 by physician and pharmacist Wallace C. Abbott. He initially worked out of the back of a People’s Drug Store in Chicago. In 1894, Doctor Abbott incorporated his business under the name Abbott Alkaloidal Company which would later become Abbott Laboratories (Figure #1). In 1916, Abbott produced its first synthetic medicine, Chlorazene, an antiseptic that was widely used during World War One to treat wounded soldiers. In 1922, Abbott developed its first local anesthetic, Butyn. In 1934, Abbott applied for a patent for the rapid-onset short-acting anesthetic, Pentothal. Pentothal soon became the world’s leading general anesthetic agent.

Abbott’s Pentothal patent expired in 1954 by which time Abbott faced fierce competition from other pharmaceutical companies for a share in the anesthetic market. It was then that the use of Pentothal postcards was initiated. At the time, postcards were a cheap but effective way of product advertising, much as trade cards had been in the Victorian Era.

The logistics of producing Pentothal postcards were as follows: picture postcards depicting regional scenes and/or people were selected by Abbott representatives from various countries. The cards were then printed locally with a Pentothal message, postage was applied, and the cards were mailed. The idea was to mass market anesthesiologists with advertising cards posted from exotic locations all over the world. The initial targeted audience was soon expanded to include non-anesthesiologist physicians, nurse anesthetists (Figure #2) and even hospitals and clinics (Figure #3).

Figure #4 and Figure #5 show the front and back sides of a typical Abbott Pentothal postcard mailed from the island of Fiji to a physician in Connecticut in 1967. This card demonstrates the elements that made Pentothal postcards so desirable to those who received them then and later to collectors: the front side picture and the back-side stamps and message.

Altogether, Abbott Laboratories produced more than 170 different Pentothal postcards not including dozens of variations and errors. The Pentothal messages were printed in many different styles and fonts and although most were printed in English, at least nine other languages including Dutch, French, Portuguese and Swedish (Figure #7) are known to have been used.

Abbott cards were mailed to physicians in at least nineteen countries besides the United States. Figure #8 shows a Pentothal card sent from Sweden to Lima, Peru, in 1958.

It is important to remember that during this difficult period in history, researchers and physicians have been out there working on solutions for more than a hundred years. Post cards have played a fascinating role in getting the word out about many of these medical breakthroughs.

I would be happy to hear from other Barr’s readers who share my interest in Dear Doctor postcards. You can contact me at bushcw@comcast.net. As always, good hunting and stay safe.