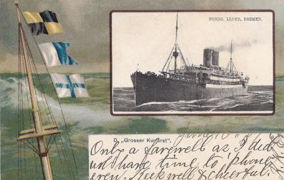 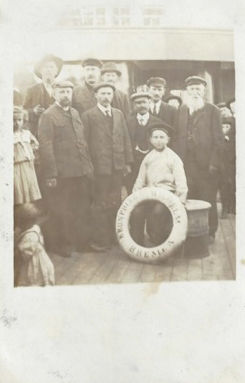 Unidentified family on the Kronprinz Wilhelm.

Unidentified family on the Kronprinz Wilhelm.

I was pleased to receive from Barr’s reader Richard Kaplan more details on two of the cards pictured as my ‘Draft Choices’ in my recent article. Richard has a wonderfully deep collection of German postcards and his knowledge of his subject reflects a lot of study and research.

So here is his reply and a couple of further illustrations (why would I want to just repeat the originals?) of the topics that he has covered. O.K. readers get out your German Ocean Liner postcards and start checking!

Read your article in the July 21 issue of Barr’s. Your figure 6 is part of an extensive series of cards, mostly by the original printer, Sander & Sohn, then Hobbing, and finally by Ocean Comfort Company. Of course there are MANY variations, but it is the translations of the signal flags that I will mention here.

They are from the “Internationales Signalbuch. Ed. 1901”, though the letters are often covered up by the stamp when mailed. They do not spell out any linked messages; each set of 3 flags codes for one specific message, given in German and English on the card. TNO — My best respects — is the commonest. Others include FIE — At Home, DJX — Farewell, TDI — What Sort Of A Passage Have You Had (a rather rare one), NTO — Want Of Funds (another rare one), LVA — Wish you a pleasant voyage, JGV — Will you give me the pleasure of your company?, GHV — My best respects [the codes obviously changed, though this is also a Sander & Sohn, which is weird!], and some without a translation.

Other codes might exist; I have one with the letters hidden under the stamp which reads: Allow me to congratulate you. This card is exceedingly unusual because it was mailed to Mr. Theo Hardeen in London with an Anger & Bowers Variety Agents cachet and forwarded to “c/o Houdini Alhambra Theater Paris,” with a handstamped signature of “C Gladys Weiss” (Erich Weiss’ wife, Houdini’s last name being Weiss). I have these from 30 different ships.

The Rudolf Kelch cards are also of interest to me, though ones with a printed fill-in message are quite rare. Mostly they have a lifering with a fixed year date and patch plates for the day and month, just the poem, and often a picture of the Columbus.

Lifering realphoto cards are a specialty of mine; I have 126 from NDL alone, including the one you have (and also a printed one) from 40 ships. Rings come in black and white, and also horsecollar style like yours, mostly in white. Pre-WWI ships have the lettering seriffed, post-WWI ones have it in block, something very few people know. My most unusual is post-WWI white ring Berlin featuring a group of men with the inscription on the back “13. 11. 28 ,,Vestris” Mannschaft [crew] Boot 13.” Indeed, the Berlin rescued many of the survivors from her sinking.

One of the most unexpected is from a HAPAG ship, the Kaiserin Auguste Victoria, an ordinary crowd shot. A man in a suit and tie is sitting on one side of the ring and a man in a sailor suit on the other — and they are clearly holding hands!

I’m sure you expected an email from me.