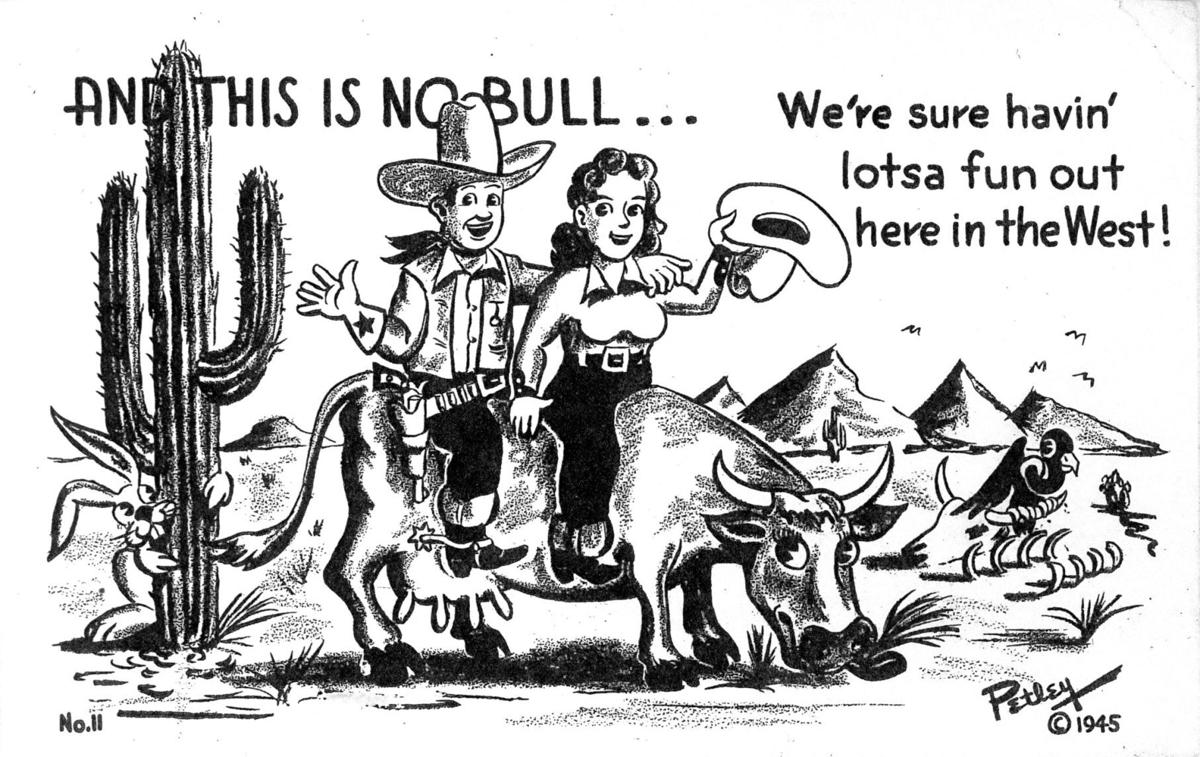 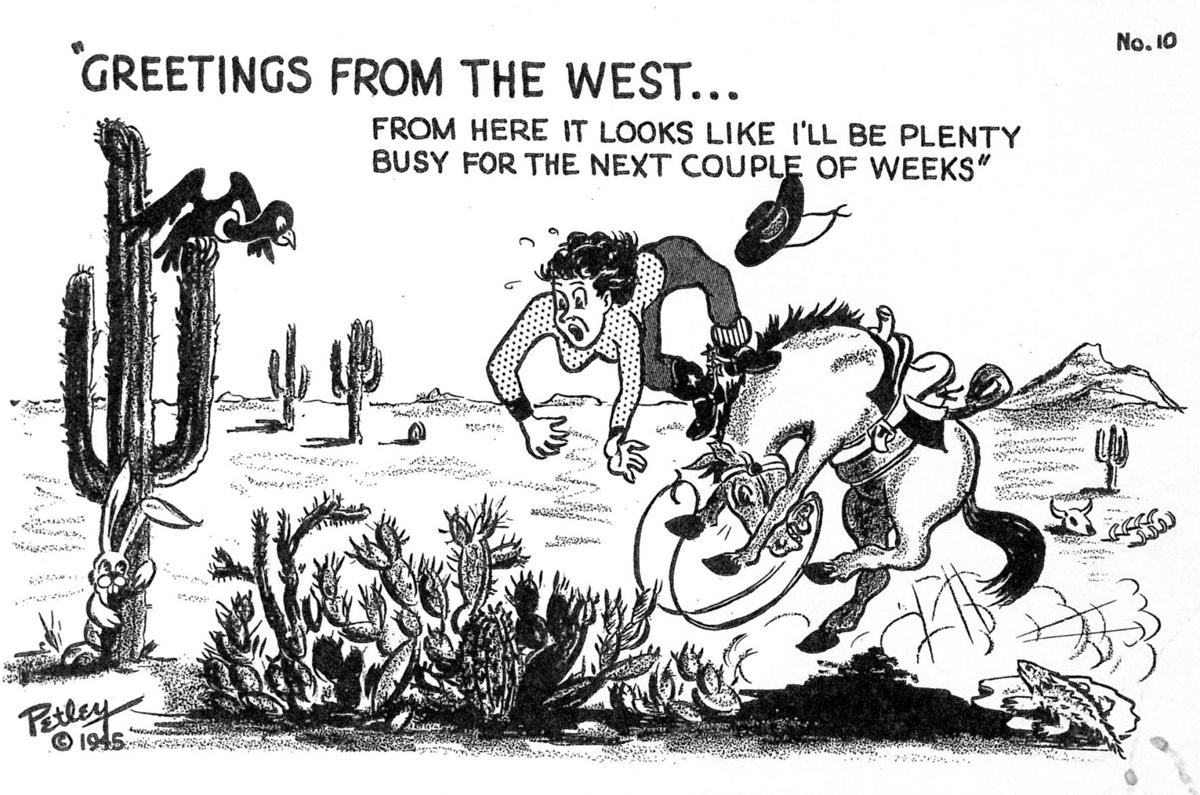 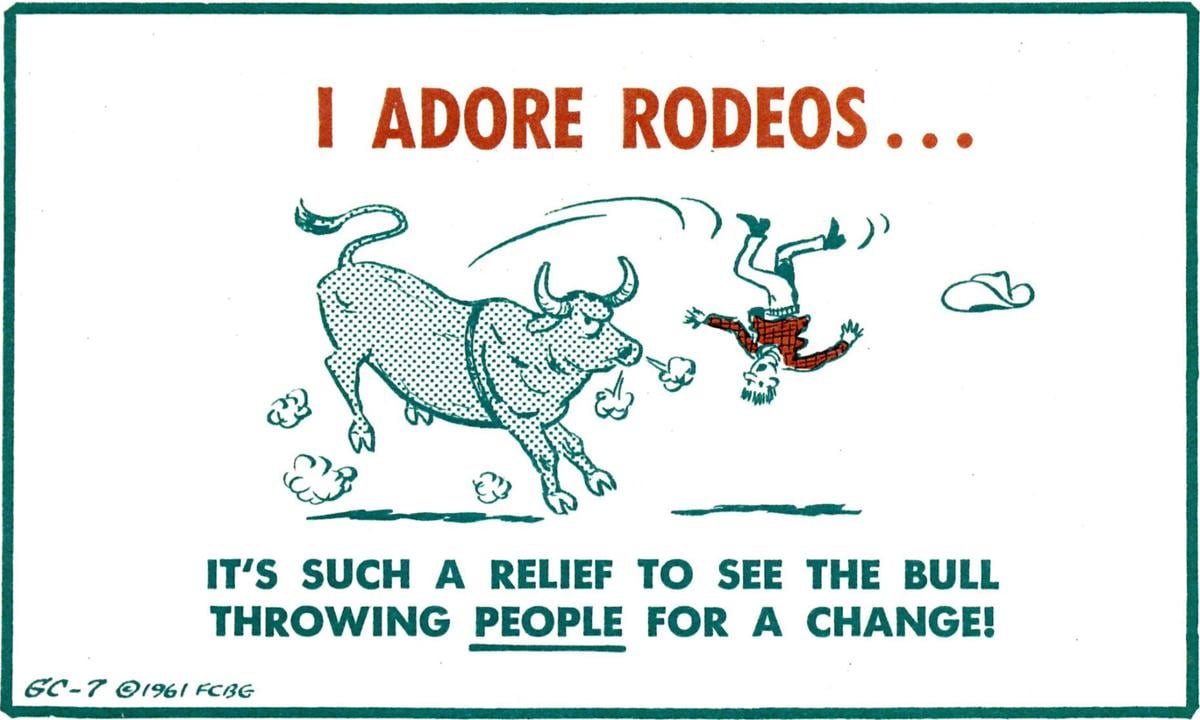 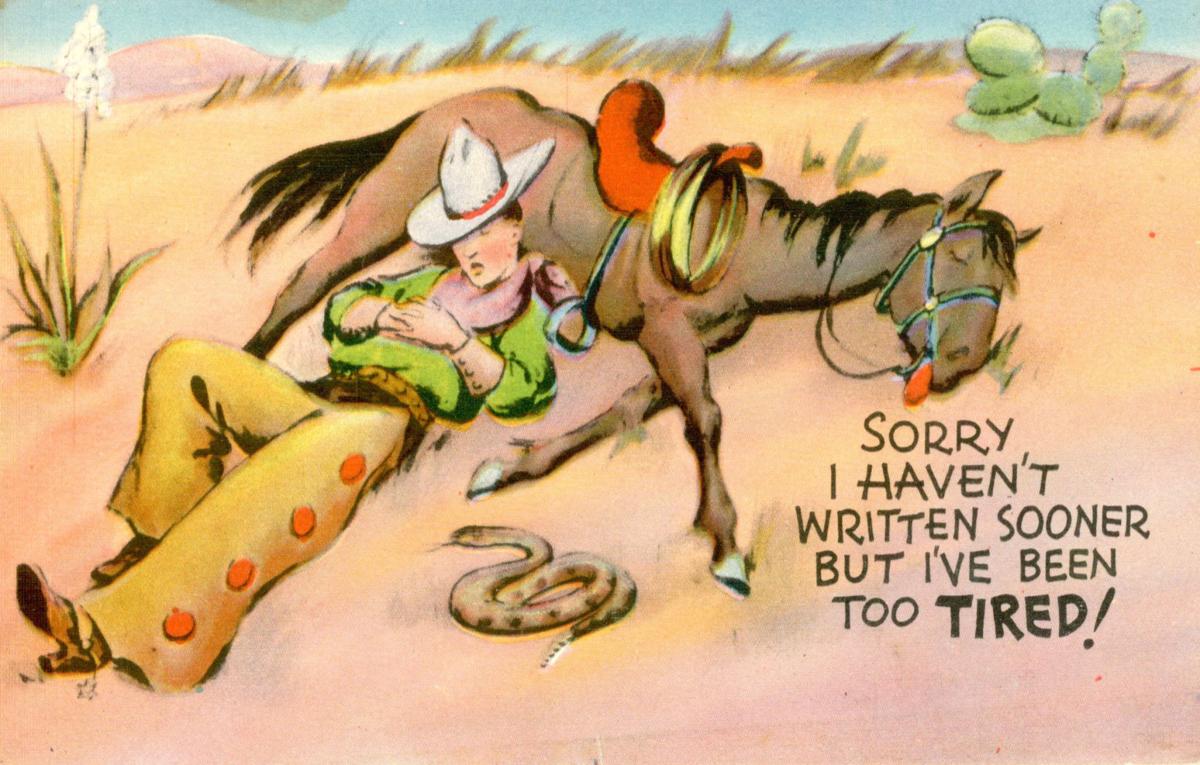 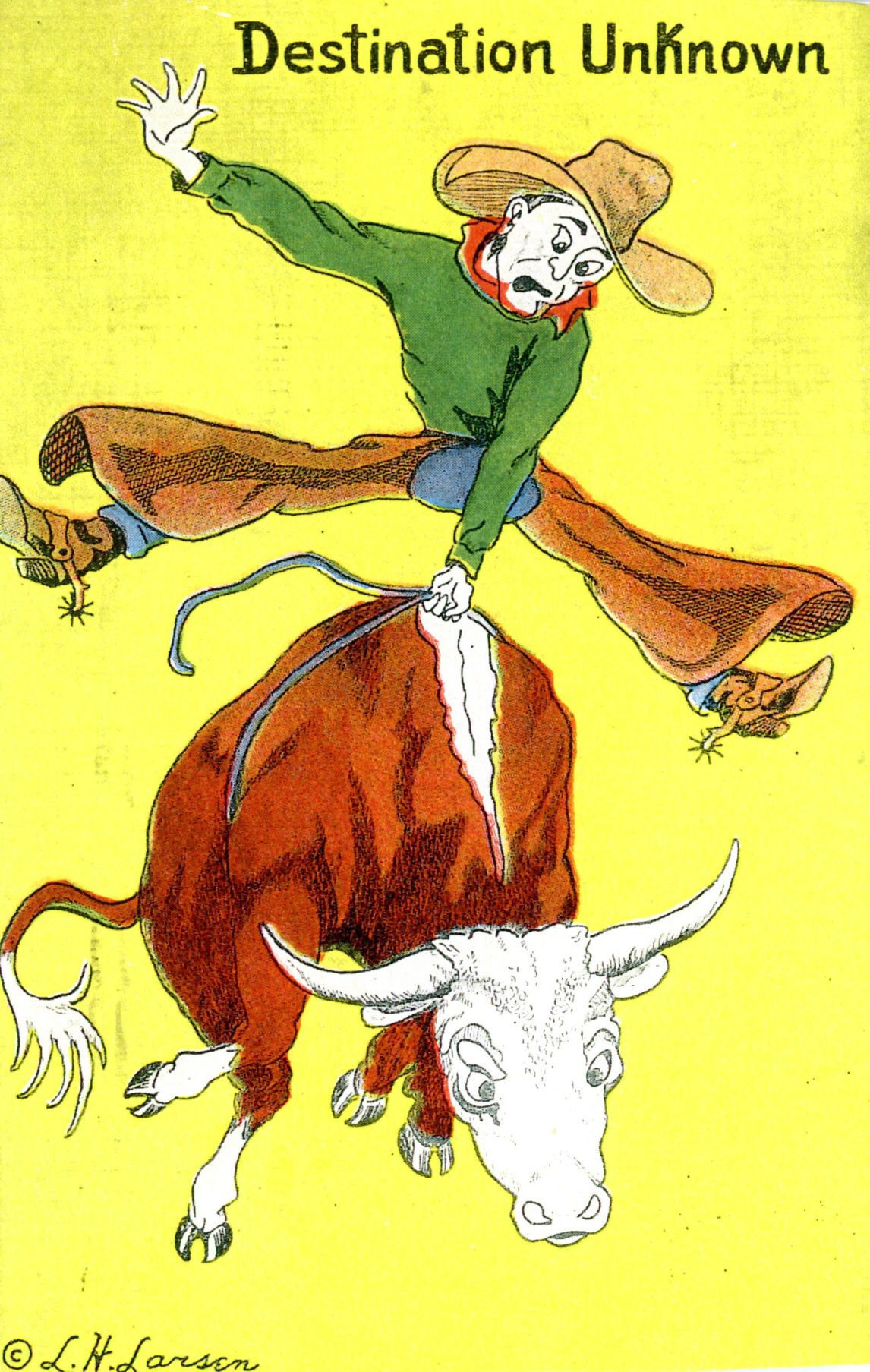 The rancher or cowboy of yesteryear and today, whether working on a ranch or following the rodeo circuit, can face some very tough and sometimes dangerous tasks.

However, in collecting cowboy and western themed postcards, I’ve found many with enjoyable comic drawings and humorous remarks. Some might be a little risqué or in poor taste, especially in today’s world, but we all need something to chuckle about now and then. Many comic cards are drawn by artists who have contributed to a large variety of different postcards.

One artist turned publisher was Robert Petley, who was born in Akron, Ohio on November 11th, 1912. His father was an inventor and product developer for the Goodrich Tire Company, where he helped pioneer the balloon tire.

Robert was also creative. He was good in sports, including high school football, boxing, and track. He was also in demand as a designer for posters and banners advertising the school events. In 1937, he graduated from Hiram College with a bachelor of arts degree, and went to work selling candy for the Life Saver company, and during or afterwards, not sure which, he promoted a national marbles tournament for the Scripps-Howard Newspapers.

He also went to work for the Fisher Body Division illustrating repair procedures for the B-29 Bomber. In July, 1942, he married Kathlyn Niles, and a year later they moved to Arizona. Bob Petley suffered from arthritis, and he hoped the warm/dry climate would help with the continuing health problem. He was hired on at the Arizona Republic and worked for three years in the display advertising department; however, he wanted something more. Wartime travel restrictions were beginning to be lifted. Bob envisioned that perhaps there would soon be a need for convenient, and inexpensive postcards for tourists to send as they began to travel throughout the Southwest. He began a new business at home with 12 black and white humorous postcard drawings, all displaying the Southwest in a humorous style, with cowboy/cowgirl like characters. He signed, dated, and numbered each card on the front. The back of the cards were printed with Bob Petley, “The Cowboy Cartoonist” — Phoenix, Arizona. I have four of these cards, numbered, 3, 7-A, 10 and 11, (copies I’m sure, as some of his originals are on display at the Smithsonian Institute.)

He began his own postcard company, Petley Studios, Inc. which later became a large distributor in the Southwest. One of his popular creations, was a card called ‘The Jackalope.” I think almost everyone has at least seen this card. It has a picture of a cowboy riding a saddled Jackrabbit, and they have different remarks, like simply “A Cowboy Punching Cattle.” I’ve seen it on black and white, linen, chrome, regular and even on the larger continental size cards. The figure has been used by a variety of different publishers and often found under the exaggeration category. Mr. Petley really started something.

The Petley Studio, Inc. became one of the nation’s largest publisher and distributor of scenic color cards of Arizona, New Mexico, West Texas, Southwest Colorado and Eastern California. In addition to Petley Studios, Inc., he owned retail stores in Ouray and Silverton, Colorado. Mr. Petley passed away on July 7th, 2006.

However, Mr. Petley wasn’t the only artist/publisher of comic western cards. The comic card, “I Adore rodeos” — is a chrome card, copyright by Fun Cards by Gad” — Minneapolis, Minn., and numbered GC-7, and published (I guess) -1961, on the bottom front of the card. I have several cards that show cowboys in some kind of awkward situation, where he apologized for not writing. I guess sending a comic card was kind-of an apology for not writing, but in one-way, they were writing. A card simply didn’t take much time — nor stationery — and the stamp cost a lot less.

I’ve enclosed a card showing a cowboy and his horse sleeping on the desert because he’s too tired to write, however, it looks like he’ll wake-up soon up If that rattle snake has anything to say about it. The card is linen and published by the Black Hills Novelty Co., South Dakota.

One of my favorite artists/publishers of western/cowboy cards is L H. “Dude” Larsen. Most of his art drawings are beautiful illustrations of horses, cowboys, cattle, and range land, but he did do some comic cards also. . The enclosed card notes: “Taken from an original cartoon by artist & poet, L. H. “Dude” Larsen. The card was mailed with a postmark of 5-19-48.

There is a big variety of humor postcards out there -even today. The early cards, maybe kind of silly, but they are fun. One can find a little bit of humor in most occupations — and many often show up on postcards. The Cowboys/cowgirls and the Wild West are just one example.