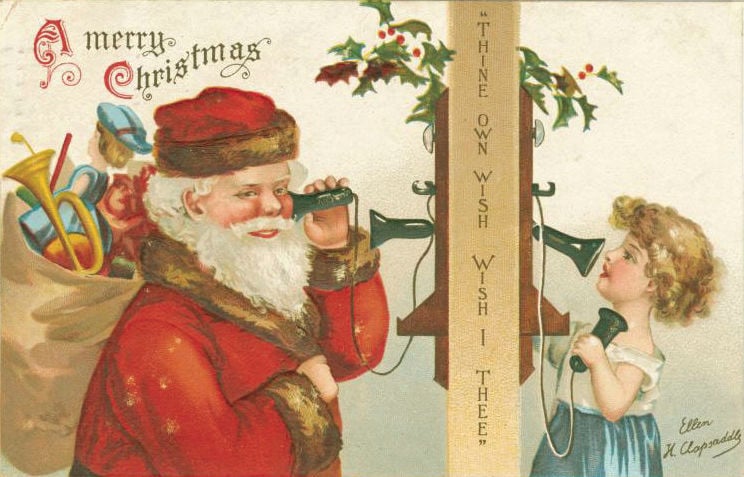 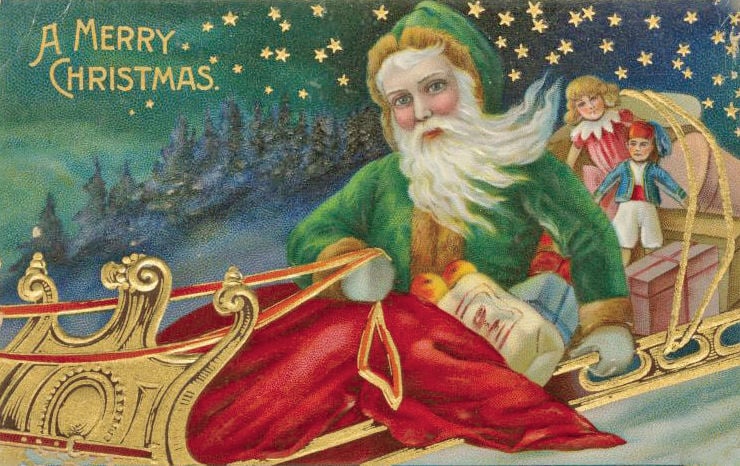 Santa in a green suit.  Many holiday postcard collectors actively seek out cards of Santa in a non-traditional suit. 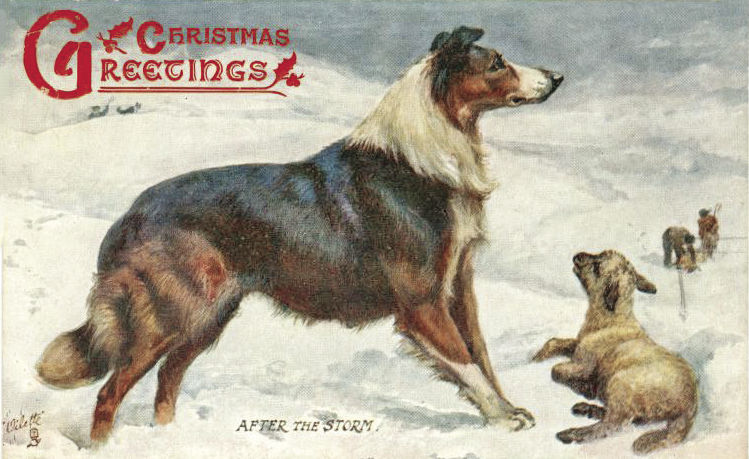 Animals were a familiar theme in early holiday postcards.  This one, by artist Norah Drummond, is postmarked Christmas Eve, 1905. 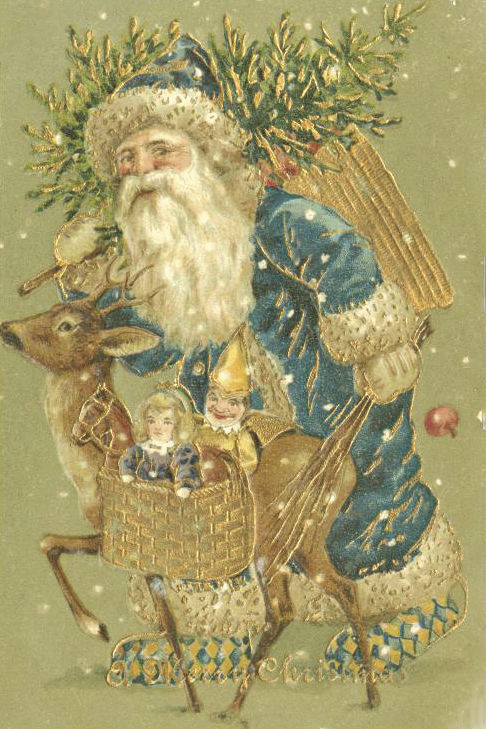 Santa in a blue suit, dated December 23, 1908 with a handwritten Christmas greeting on back. 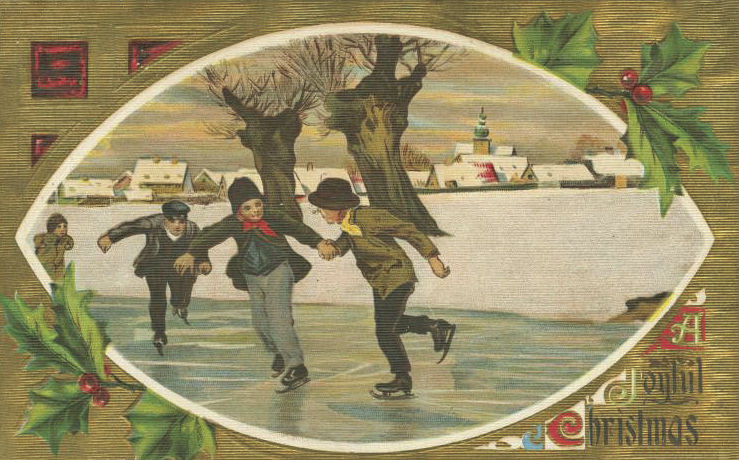 What would winter be without ice skaters? Postmarked Christmas Eve, 1909. 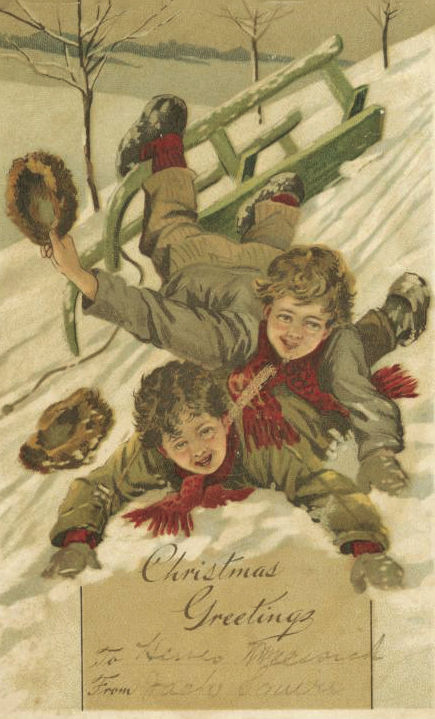 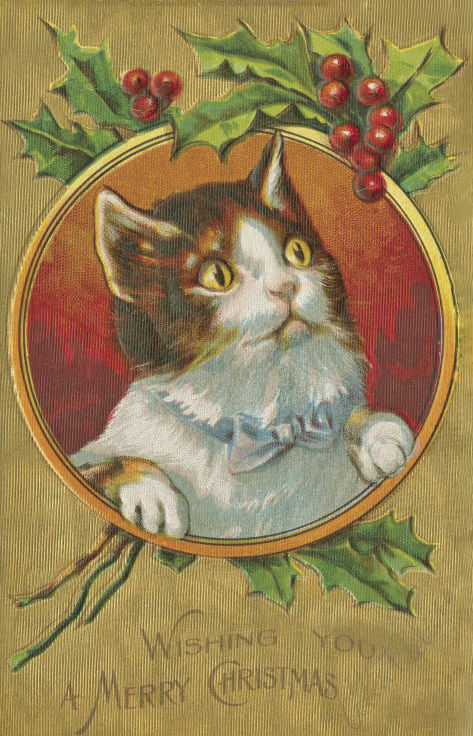 1910 postcard of a cat with a Christmas greeting. 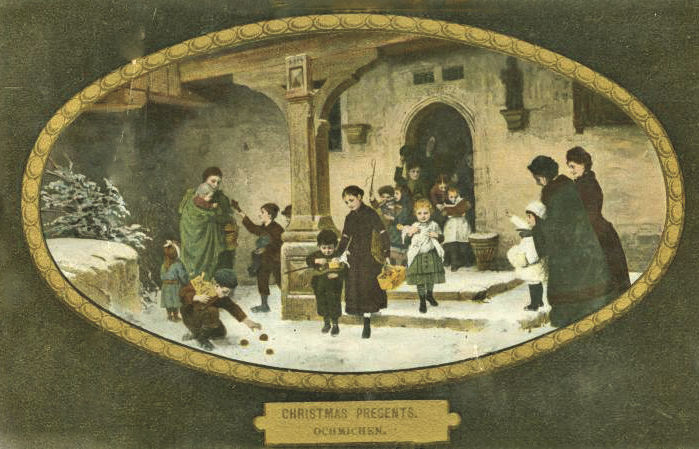 Postcard featuring the artwork of Hugo Oehmichen (1843-1932). Printed in Germany and published by Max Ettinger and Company in 1909.

Santa in a green suit.  Many holiday postcard collectors actively seek out cards of Santa in a non-traditional suit.

Animals were a familiar theme in early holiday postcards.  This one, by artist Norah Drummond, is postmarked Christmas Eve, 1905.

Santa in a blue suit, dated December 23, 1908 with a handwritten Christmas greeting on back.

What would winter be without ice skaters? Postmarked Christmas Eve, 1909.

1910 postcard of a cat with a Christmas greeting.

Postcard featuring the artwork of Hugo Oehmichen (1843-1932). Printed in Germany and published by Max Ettinger and Company in 1909.

Deltiology, the name given to the hobby of collecting postcards, is, by most all accounts, considered to be among the top three collecting hobbies worldwide--with stamp and coin collecting rounding out the top three. Their popularity with collectors is perhaps due in large part to their broad subject matter and universal appeal. Unlike many other collectibles, postcards take up little real estate so even people living in tiny apartments can acquire a huge collection.  And it's one of the least expensive hobbies to get started--postcards can be had in the marketplace for under a dollar. Postcard subject matter runs the gamut from towns and states to historical events to holidays--and everything in between.

The focus of this article is on holiday postcards; specifically antique Christmas postcards. But before we begin, a quick thumbnail history lesson on just how postcards came to be.

On February 27th, 1861, the United States Congress gave its' approval for privately printed cards weighing less than one ounce to be sent through the mail.  John P. Charlton, a printer and stationer from Philadelphia, PA, is credited as being the inventor of the first private postal card for which he was granted a copyright. He transferred the copyright and idea to his friend and partner Hymen Lipman, who printed the postal cards with the words "Lipman's Postal Card. Patent Applied For." The earliest known postmark of these cards, sent from Richmond, Indiana, on October 25th, 1870, featured an advertisement of Esterbrook Steel Pens on the front.

In 1901 the U.S. government granted the use of the words "Post Card" to be printed on the undivided back of private cards and in so doing dropped the long verbiage previously required. England was the first country, in 1902, to allow for divided backs (one half for the address, the other half for the message). The U.S. followed suit in 1907, thus leading to what is now called the "Golden Age" of postcards as millions were sold, sent and received. The divided back became the standard format which left the front available for advertising, artwork, photos, holidays...and yes, even Christmas-themed illustrations.

The majority of American postcards at that time were printed in Europe.  Germany in particular had lithographic printing processes that were far superior to other countries--the U.S. included. Millions of postcards were imported into the U.S. from Germany. With the start of World War I in 1914, higher import tariffs on goods were implemented, Britain's naval blockade cut supplies on the last of the imported cards and there was a worldwide shortage of printing ink. While the U.S. struggled to meet the demands for postcards, the printing process couldn't match that of Europe and postcard sales declined dramatically.

It is perhaps safe to say that, with rare exception, most of the antique holiday postcards one finds today will have been made after 1905. The earliest Christmas postcards featured flowers, fairies and gardens--perhaps to remind receivers and senders that Spring does indeed come after an oftentimes brutal winter. Transportation (especially airplanes), woods, nature and animals were also familiar themes on early postcards as well as children, angels, pastoral scenes and, of course,  Ol' St. Nick himself.

Many collectors focus their postcard searches on one particular subject matter or sub-category. Of particular interest to collectors are: *Santa Claus (a.k.a. Kris Kringle, St. Nick...whichever name you choose to call that jolly guy with the white beard and traditional red suit who delivers toys to children).

Collectors look for Santas dressed in non-traditional suit colors--green, blue, purple, gold, brown, white, etc. Especially desirable in the Santa category are Uncle Sam Santas. Recently a rare Christmas squeaker postcard featuring Uncle Sam in vivid red and white striped pants, starred blue jacket, white top hat with decorative bands of stars and stripes carrying a basket on his back filled with toys and small U.S. flags, while holding a decorated Christmas tree in his arms, was up for auction online with a starting bid of $499.99.

*Illustrators/Postcard Artists: Many collectors are drawn to postcards by their favorite illustrators/artists and will actively seek them out. As with any artist in any medium, each had his or her own unique style. Artist-signed postcards, which are reproductions of original works of art, are highly sought after by collectors; especially if the postcard is from one of their favorites. Millions of postcards were produced over the years with many being made by well-known illustrators; however, millions more were created by unknown illustrators working on contract for publishing houses--which does not lessen their uniqueness, intrinsic value or collectability. Demand for postcards was high and many publishers of the day, in order to remain competitive and keep the market fresh with new designs would hold contests for new designers, oftentimes with the winner receiving a cash payment and a lucrative contract with the publishing house.  A few of the more famous and well-known postcard artists include Frances Brundage (1894-1937); Maud Humphrey (1868-1940); Samuel L. Schmucker (1879-1921); Louis Wain (1860-1939 most notable for his anthropomorphic cats) and, my personal favorite, Ellen Clapsaddle (1865-1934).

*Publishing Houses: There were several well-known publishing companies of the era--International Art Publishing, Bamforth & Company, Max Ettlinger & Company, yet time and again in my research two names kept popping up as prolific postcard publishers that produced postcards with mass appeal--John O. Winsch and Raphael Tuck and Sons. It seems as though many postcard collectors have in their collections, entirely or in part, postcards published by these two. It would appear that Winsch, who used European artists to work with his German printers and had a stable of highly talented artists, including Samuel L. Schmucker, edges out Tuck when it came to postcard sales but also that Winsch had a reputation of producing exceptional quality cards that set the bar for other publishers. Though the majority of Winsch postcards were printed in Germany, some were printed in Philadelphia, PA, which lacked the Winsch name, though shared similar graphic design backs as those made in Germany. Competitors, realizing the higher prices paid for Winsch postcards, started making their postcards with a strikingly similar back as those seen on Winsch cards in an attempt to sell their cards for more money. Even today, modern day copies of original Winsch postcards exist—so buyer beware!

There has always been a cross-over between postcard and stamp collectors. My research yielded yet another potential cross over item which perhaps many collectors are unaware of-- Christmas seals.  While not technically a stamp it is often collected by both postcard and stamp collectors as it was used on postcards, letters and packages sent through the mail. Einar Holboell, a Danish postal employee conceived the idea of using Christmas seals as a way to generate funds for charitable organizations during the Christmas season. The first seals were sold in 1904 in Denmark, Norway and Sweden. The U.S. followed suit, although on a limited basis, in 1907 with a seal designed by Emily Bissell to raise funds for the American National Red Cross. The seals became available for sale on December 7, 1907, and generated approximately $4,000 that first year. When a seal bears a postal cancellation mark it provides evidence of it having been used on the date of the postmark and not added after the fact.

Postcard collecting will remain, I believe, strong well into the foreseeable future.