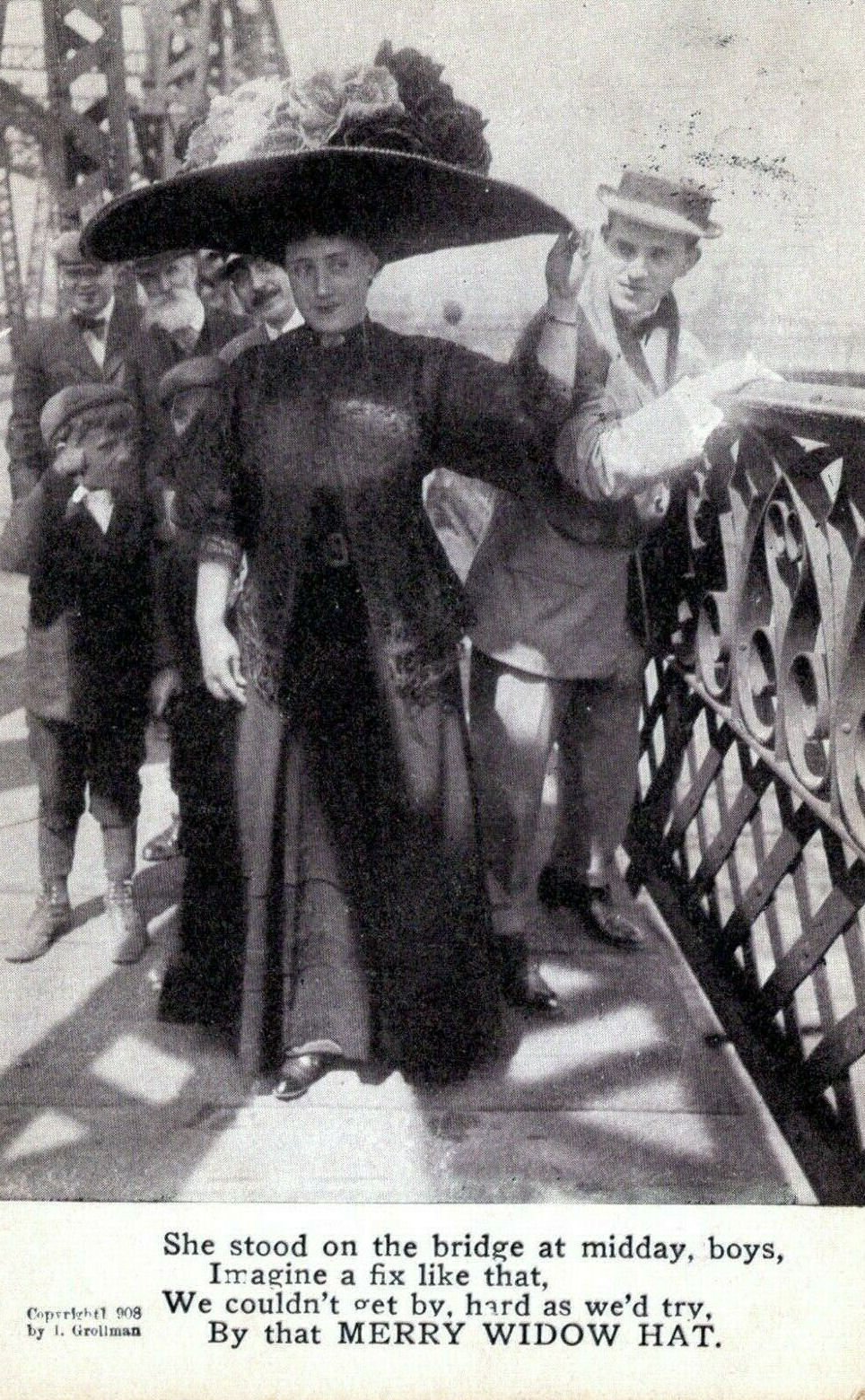 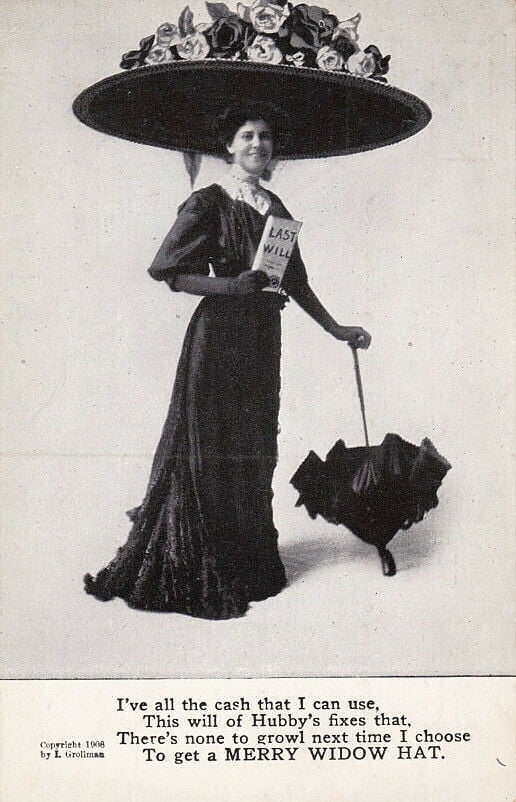 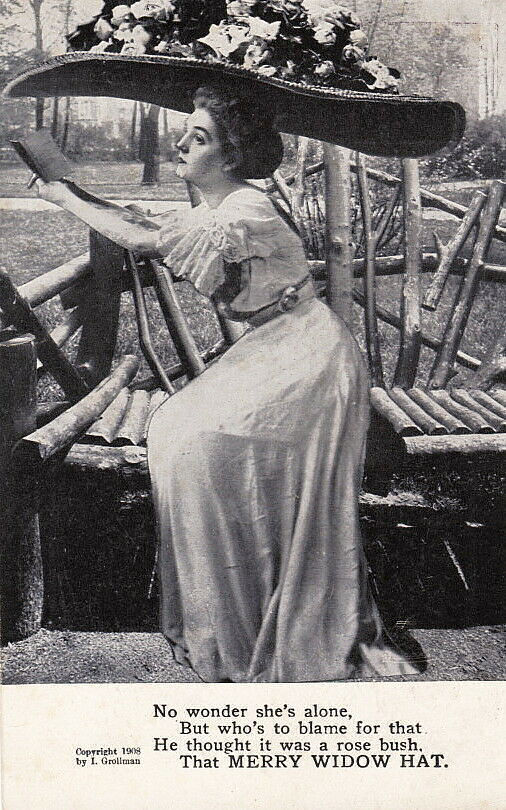 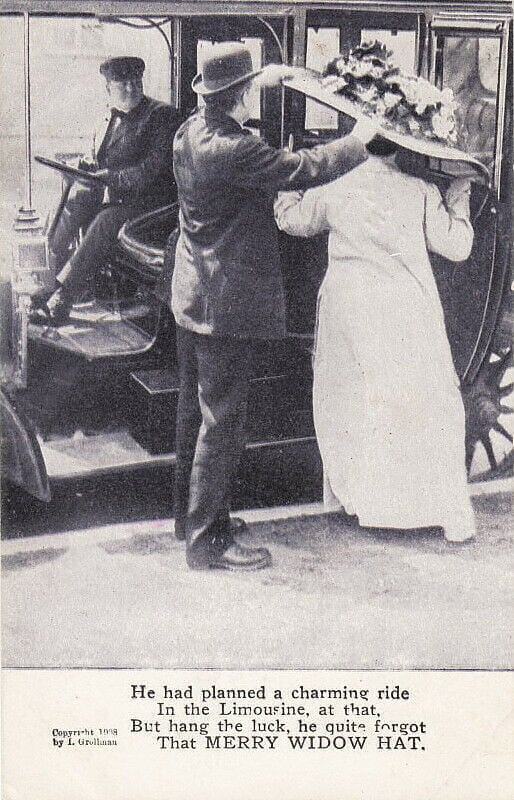 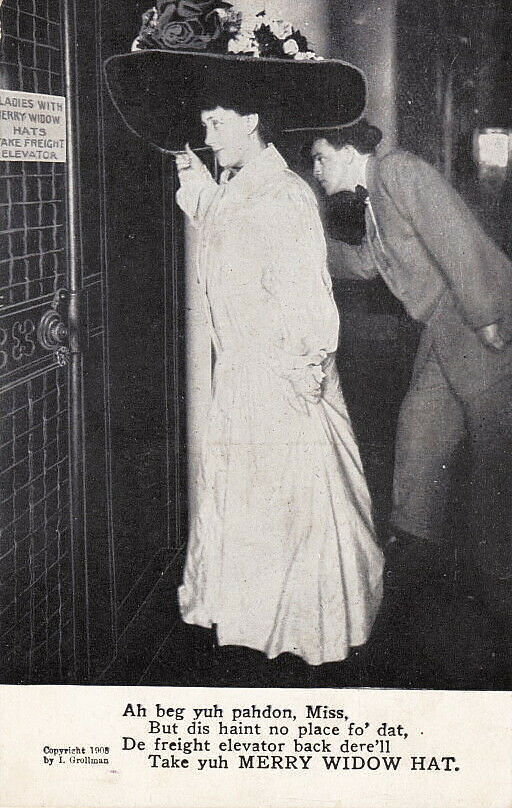 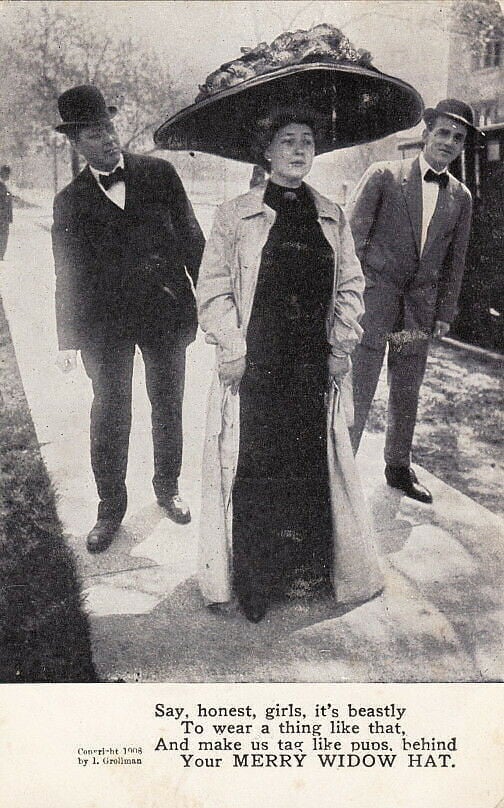 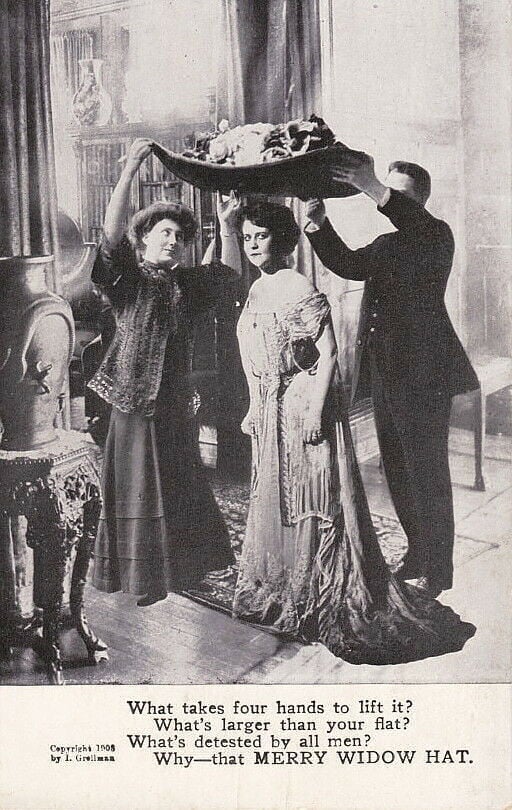 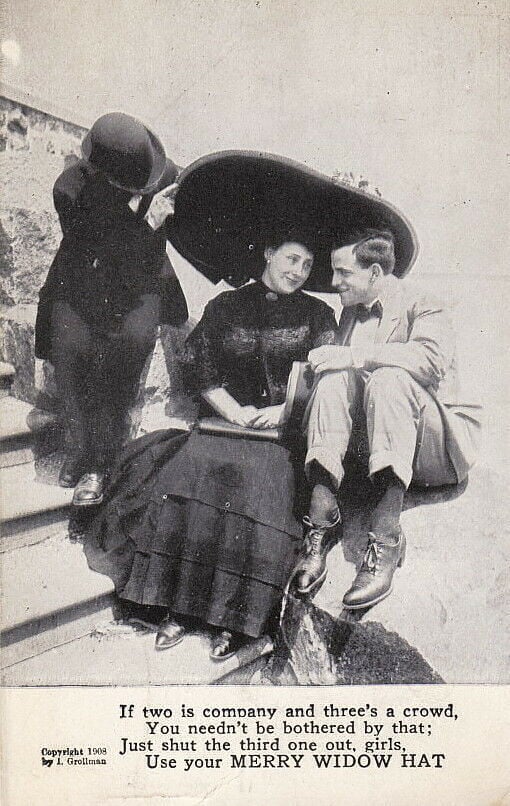 Forget the flapper, the poodle skirt, and the Nehru jacket. The biggest fashion fad of the 1900s was a wild and crazy hat called the Merry Widow!

On December 30, 1905, the operetta Die Lustige Witwe (The Merry Widow), by the Hungarian composer Franz Lehar, opened at the Theater an der Wien in Vienna, Austria. It was an immediate hit.

In the operetta, the character Hanna Glawari, a citizen of the Grand Ducky of Pontevedro, has recently inherited a vast fortune from her late husband. Since the Grand Duchy if facing imminent bankruptcy, the local diplomats scheme to have Hanna meet and fall in love with another Pontevedrovian citizen so that she and her fortune will not leave the country. After many romantic twists and turns, all ends happily.

By June of 1907, when the operetta was first performed in London, the Merry Widow had become the most popular operetta of the era. For the London production, the actress Lily Elsie was selected to play the role of Hanna. At the time, pompadour hairdos were exceeding popular. In order to accommodate this hairstyle, hats had become quite large with wide brims. With fashion in mind, “Lucile” (Lucy Christiana), a leading fashion designer of the time, was chosen to develop Miss Elsie’s wardrobe. For the primary costume, “Lucile” fashioned a Directoire style gown topped with a high crowned broad brimmed black hat encased in chiffon and festooned in feathers. By the end of The Merry Widow’s performance in London, both Miss Elsie and the hat were stars.

Prior to the creation by “Lucile”, large hats of the period had been called “cartwheels” or “Gainsboroughs”, (inspired by the portrait of the Duchess of Devonshire by Thomas Gainsborough). After Lehar’s operetta, any large wide brimmed lady’s hat automatically became a “Merry Widow”.

As so often happens in the fashion world, the basic “Lucile” Merry Widow hat design quickly evolved at the hands of other designers. It wasn’t long before the black brim widened, the crown rose, and all imaginable embellishments were attached. There were flowers, fruits, and ribbons as well as the more esoteric lizards, snakes, and birds. One enterprising fashion maven put a full-size duck complete with nest on his version.

By 1908, the operetta had made its way across the Atlantic to New York City. On June 14 of that year, the New York Times reported a full-scale riot at the New Amsterdam Theater when 1,300 female patrons battled for 1,200 souvenir hats given out by the theater’s management in celebration of The Merry Widow’s 275 th performance.

With all of the notoriety, glitz and glamour associated with this fashion statement, is it any wonder that the Merry Widow hat became the target of considerable satire? The postcard world was no exception. Artists like Sager, Carmichael and even Louis Wain dresses out their ladies (in Wain’s case a lady cat), in the most outlandish Merry Widow hats imaginable.

Seen here (Figures #1 through Figure #8) are a number of studio postcards produced by the photographer I. Grollman of Chicago. Each card in the series of 16 depicts a young lady experiencing various difficulties due to her Merry Widow hat. Each card has an accompanying four-line verse at the bottom of the card.

Although the publisher’s name is not included on the cards, it is possible that the series of cards was produced by the Amerigraph Company of Chicago. In that same year, 1908, Grollman and the Amerigraph Company collaborated on another series of cards, Leap Year cards. The Grollman Merry Widow single cards run between five and fifteen dollars each on e-Bay. I have not encountered the entire set of 16 cards offered as a single lot. Until next time, stay safe and good hunting!