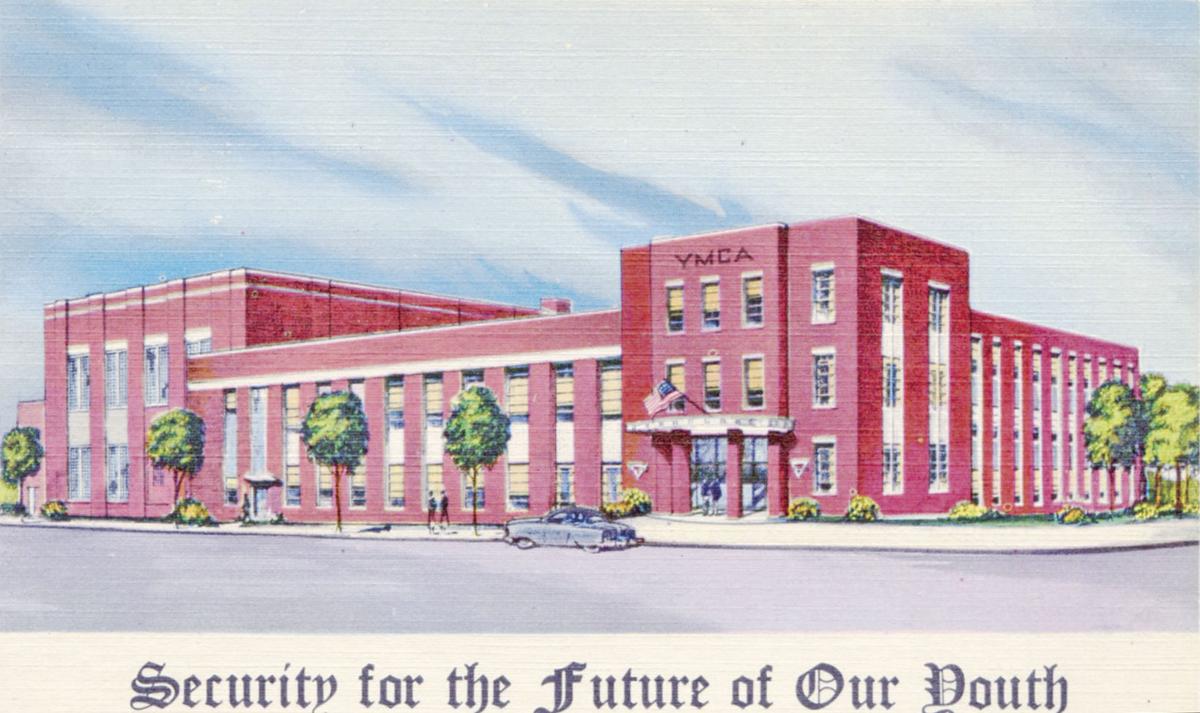 A promotional postcard showing the architects rendering of the “new” 1954 YMCA. 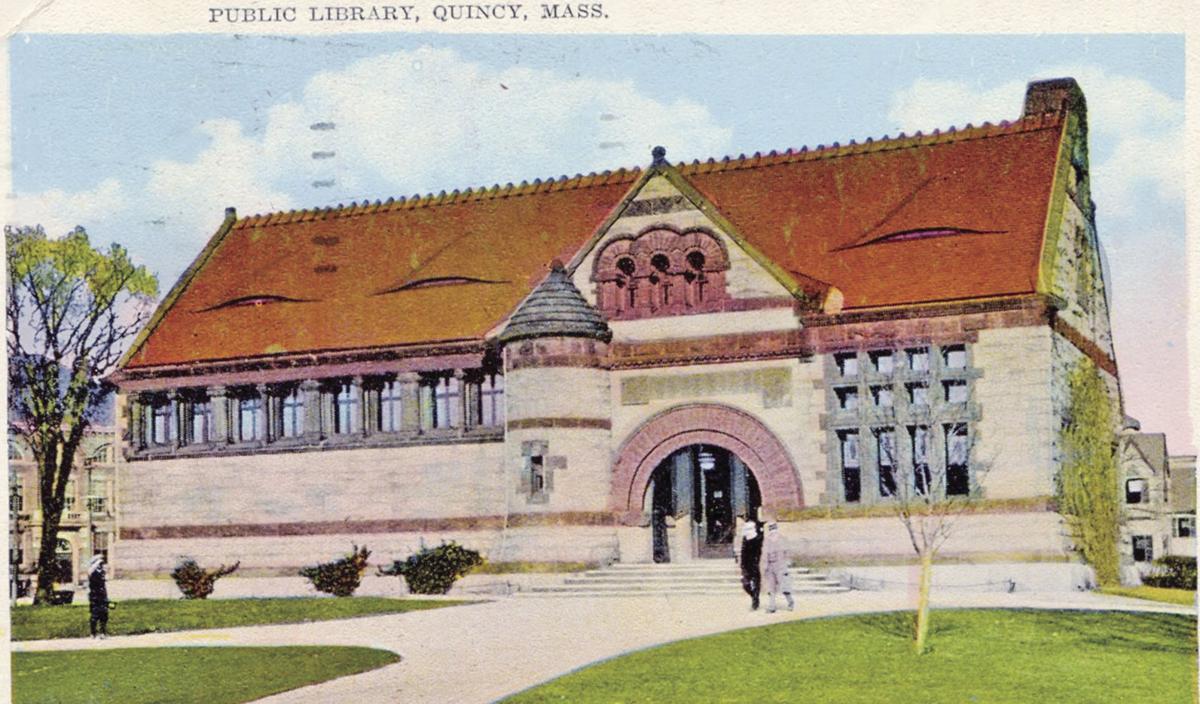 The Original 1908 Thomas Crane Library before any additions. 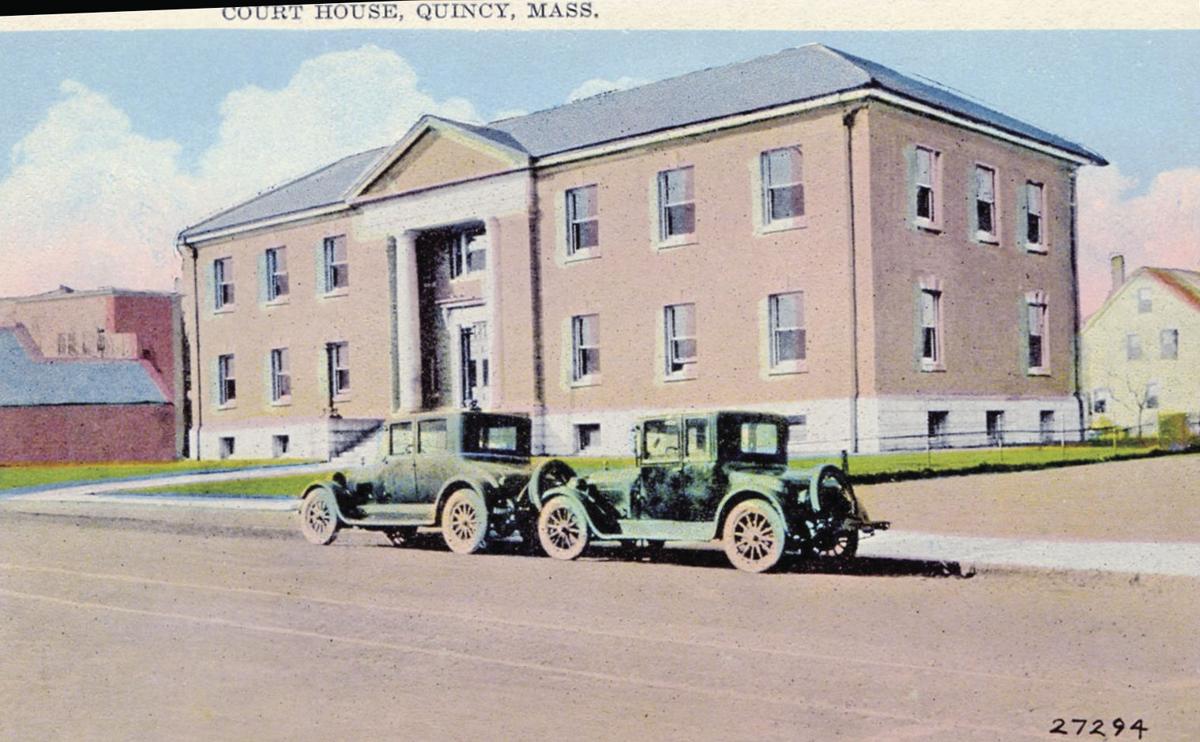 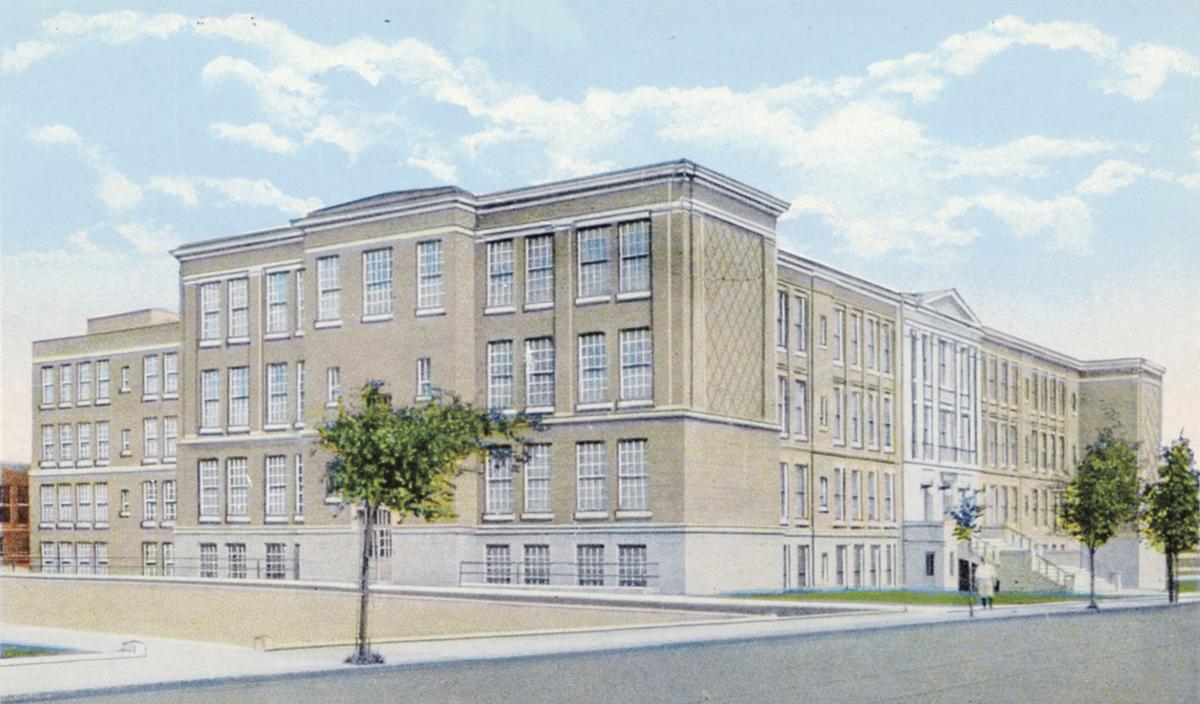 An architect’s rendering of the 1927 Quincy High School. 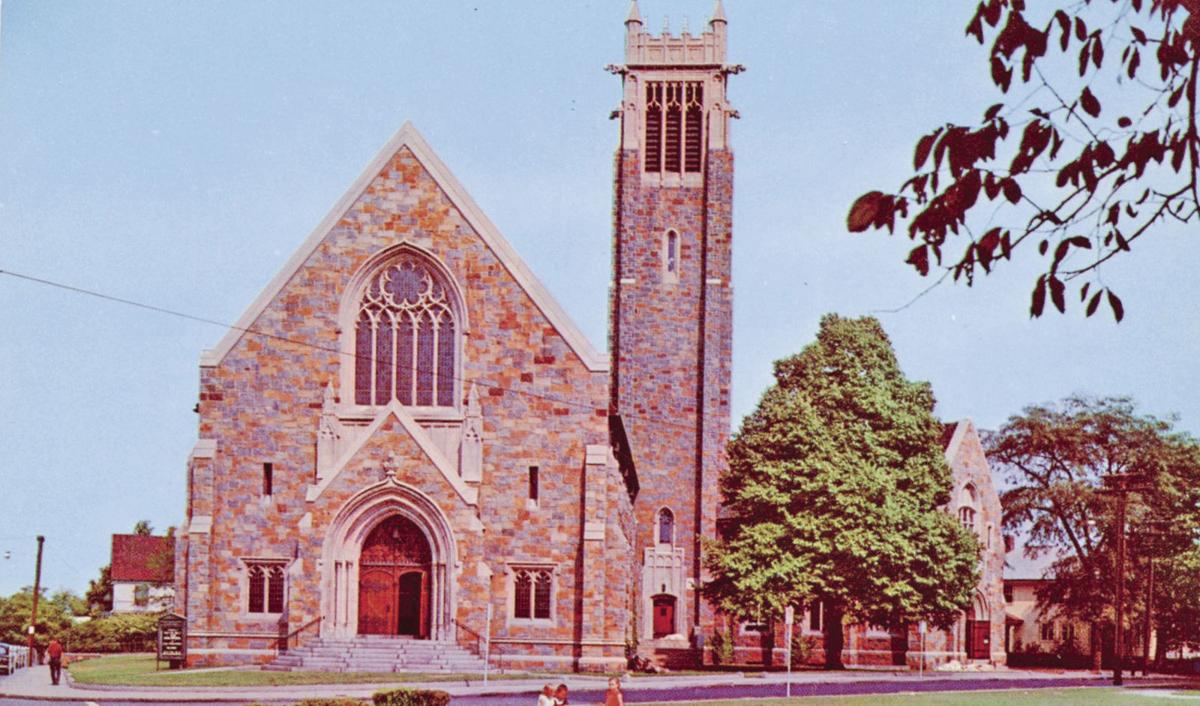 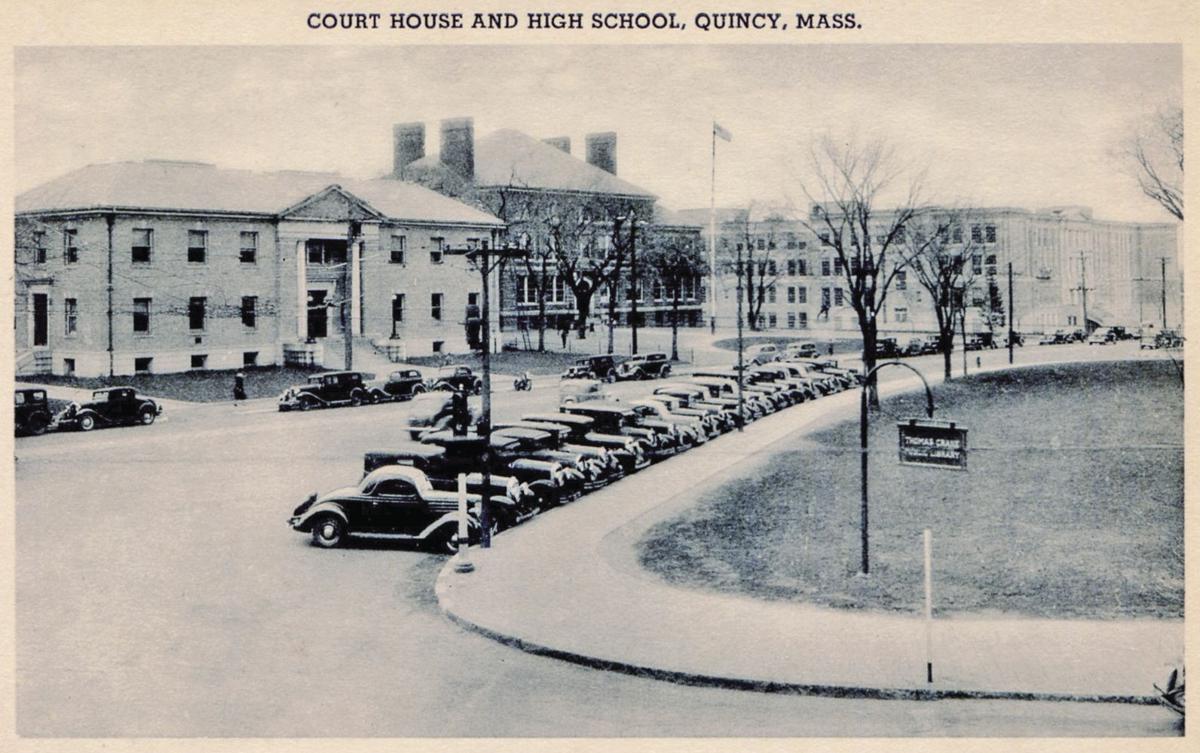 Washington Street forms the bottom of this panoramic scene.  Coddington Street disappears in the distance.  The library’s lawn occupies the right-center.  The buildings, from left to right, are former courthouse, the Coddington School, and the 1927 high school. 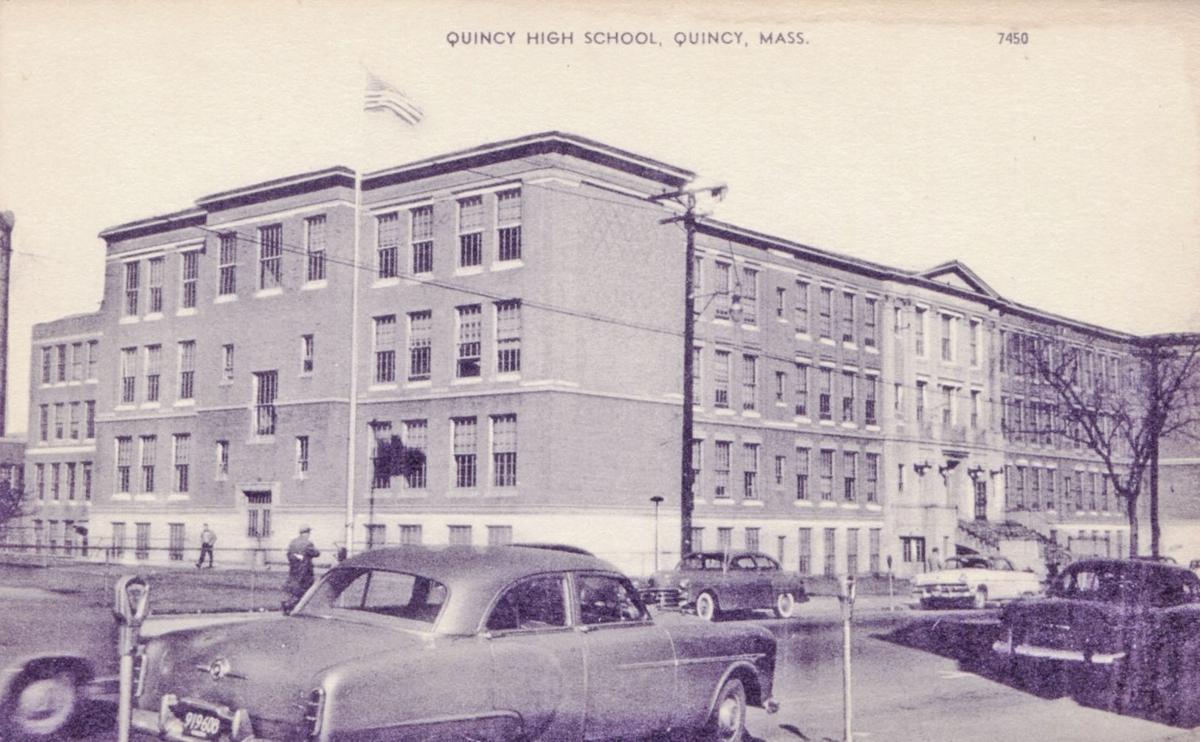 A promotional postcard showing the architects rendering of the “new” 1954 YMCA.

The Original 1908 Thomas Crane Library before any additions.

An architect’s rendering of the 1927 Quincy High School.

Washington Street forms the bottom of this panoramic scene.  Coddington Street disappears in the distance.  The library’s lawn occupies the right-center.  The buildings, from left to right, are former courthouse, the Coddington School, and the 1927 high school.

Coddington Street, Quincy, Massachusetts has been an active part of my life for nearly sixty years.  The treasure trove of beautiful, functional buildings that characterize Coddington Street completely fascinates me.

The street became part of my life in December of 1959, when I started a twenty-year career as a teacher there in the 1927 Quincy High School.  I spent an additional twenty years next door as an adjunct instructor at Quincy College.  The years went by so quickly, I didn't realize that I was becoming older.

With only a six-month break after ending my teaching career on Coddington Street, my wife became the treasurer of Bethany Congregational Church across the street from the high school.  She has held that position for almost twenty years.

Let's meet on the Hancock Adams Common and stroll the quarter mile length of Coddington Street, down and back, from Washington Street to Southern Artery

Newly constructed in 2018, the Hancock Adams Common brackets the Quincy Square end of Coddington Street. Amongst its interesting features, the Common encloses three historically prominent locations that the United States Department of the Interior has placed on their list of National Historic Sites.  The Department of the Interior placed the Hancock Cemetery on its historic site list in 1982, the United First Parish Church in 1970, and the City/Town Hall in 1980.

Other displays on the common enhance its merits but our goal today is Coddington Street.  We leave the common for another day, another visit.

Our goal today is viewing and appreciating the array of public and open-to-the-public buildings on that beautiful street.  The public seems to take all the buildings for granted.  Some are old; some are relatively new.  Several, stored away in my memory, are gone; time has replaced some, but not all, of the buildings that are gone.

From behind United First Parish Church, we cross Washington Street and arrive at the Thomas Crane Library lawns, paved walkways, and granite building.  The original building, designed by architect H. H. Richardson dates to 1882.  An addition in 1908 increased the library's capacity and enhanced its beauty with stained-glass

windows.  Stone carvings enhances the 1939 addition.  The addition of 2001 doubled the library's capabilities.

On the opposite corner of little Spear Street, granite faced Bethany Congregational Church serves the religious needs of its congregation.  Although the church congregation dates to 1832, the current church building only dates to 1928.  Day-care services utilize the church's physical facilities.  The Department of the Interior placed the church on the National Register of Historic Places list in 1989.

As we continue in the direction of Southern Artery, we pass an office building that looks like a residential home, a small, traditionally-styled, apartment building, and a more nearly contemporary style medical building.  Each enhances the ambience and functionality of the street.

We stand in front of the medical building at the corner of Newcomb Street.  Across Newcomb Street is the YMCA parking lot.  The "new," circa 1954, YMCA building stood there for over a half-century until 2018.  Now there is a vast parking area servicing the "newer" YMCA.  The newer larger building opened in 2013 and offers a vast array of services to the community.

We cross our Coddington Street with the traffic lights and arrive at Faxon Field.  The city recently renovated the field for use by the high school athletes.

Now that we are on the opposite side of the street, we start our walk back to our starting point.  We leave the athletic fields behind us.

Aah, they don't build them like they used to.  The functional 1909 Coddington School Building still meets the needs of the city's school children by providing office space for the school department as well as office space for other city departments.  Day after day, the Coddington School Building shows its proud, renovated face to its older neighbor, the Crane Library and its newer neighbor, Bethany Church.

Whoops! This tall apartment house is standing where the low-slung, former courthouse building once resided.  For a few years, the high school used the abandoned court house building for extra classroom space.   Now the building is gone, remembered only on a few vintage postcards.