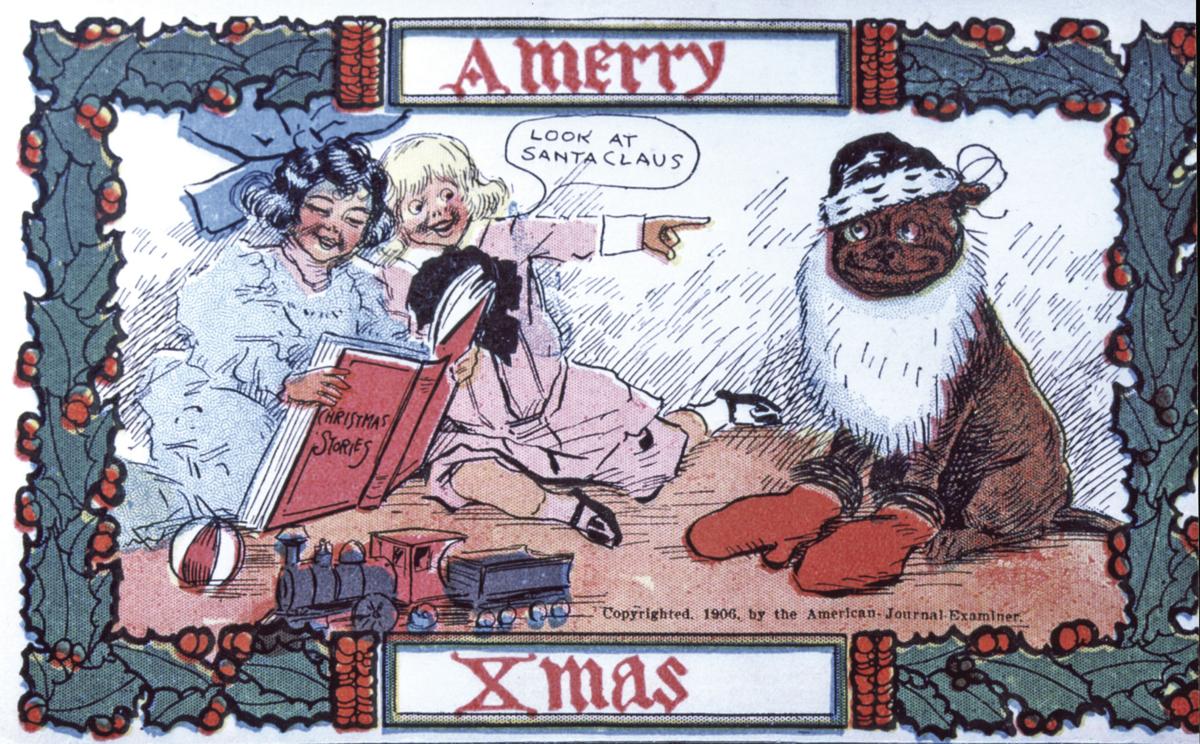 Christmas postcard (1906) of “Buster Brown” with Mary Jane and Tige. This was part of a cut-out premium sheet in the Sunday color supplement of the American Journal Examiner and other Hearst newspapers. 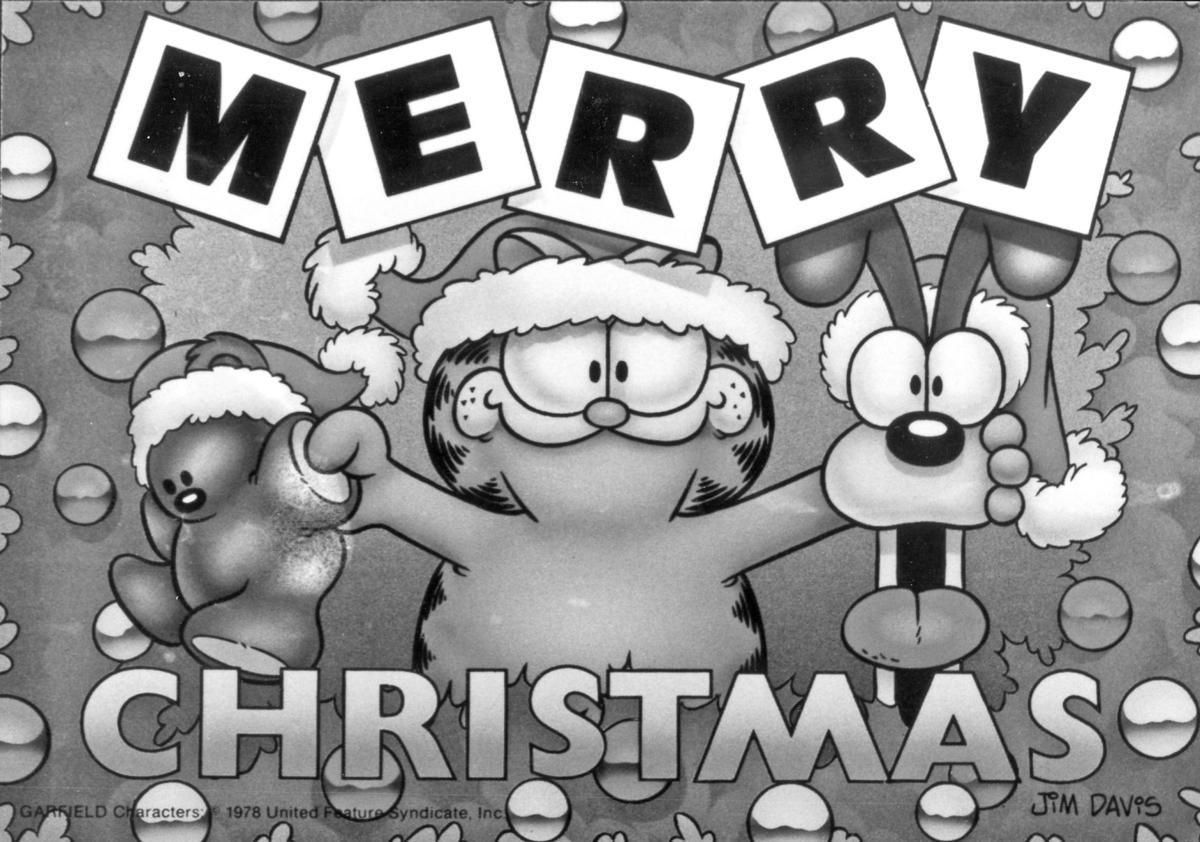 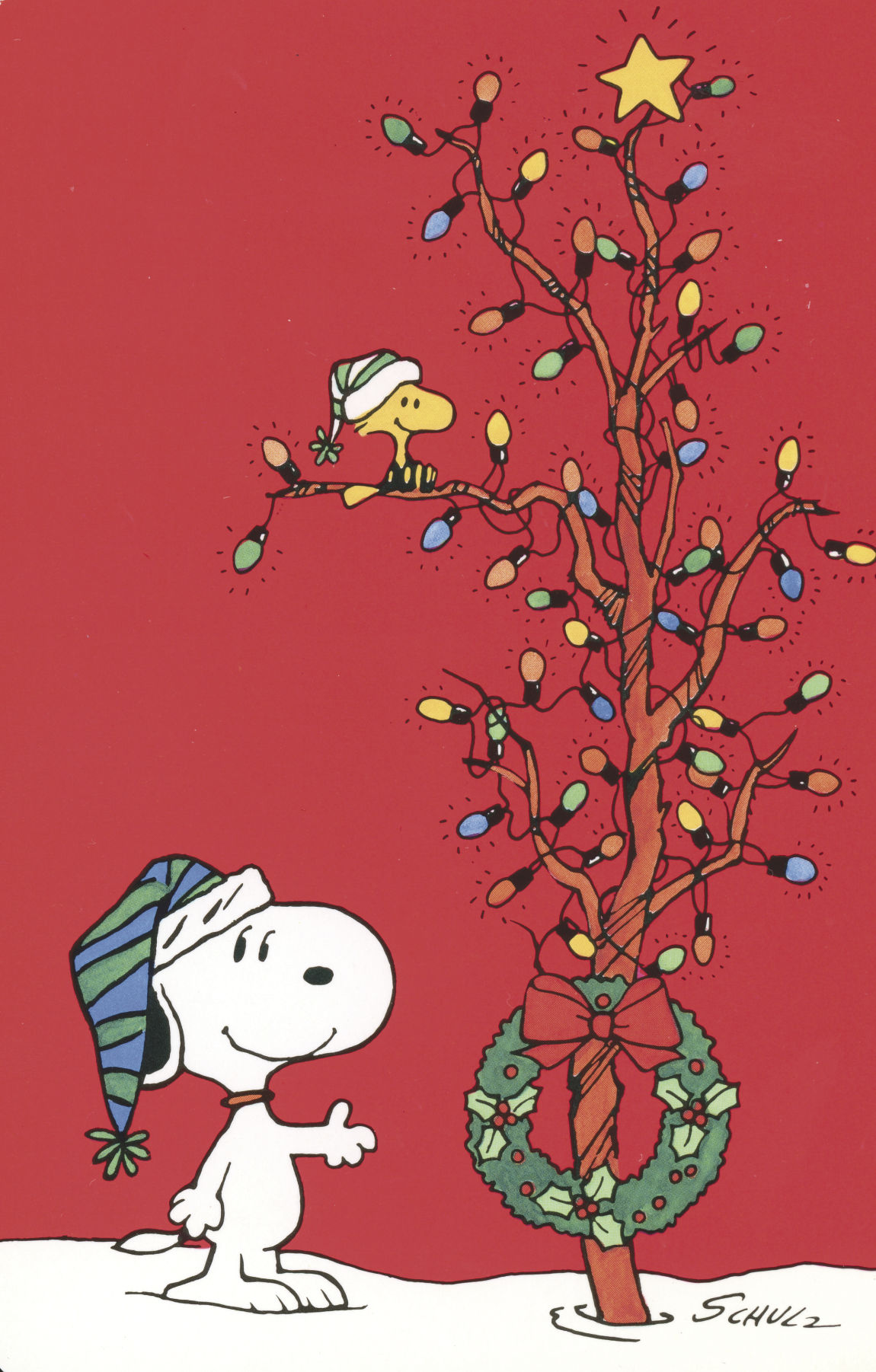 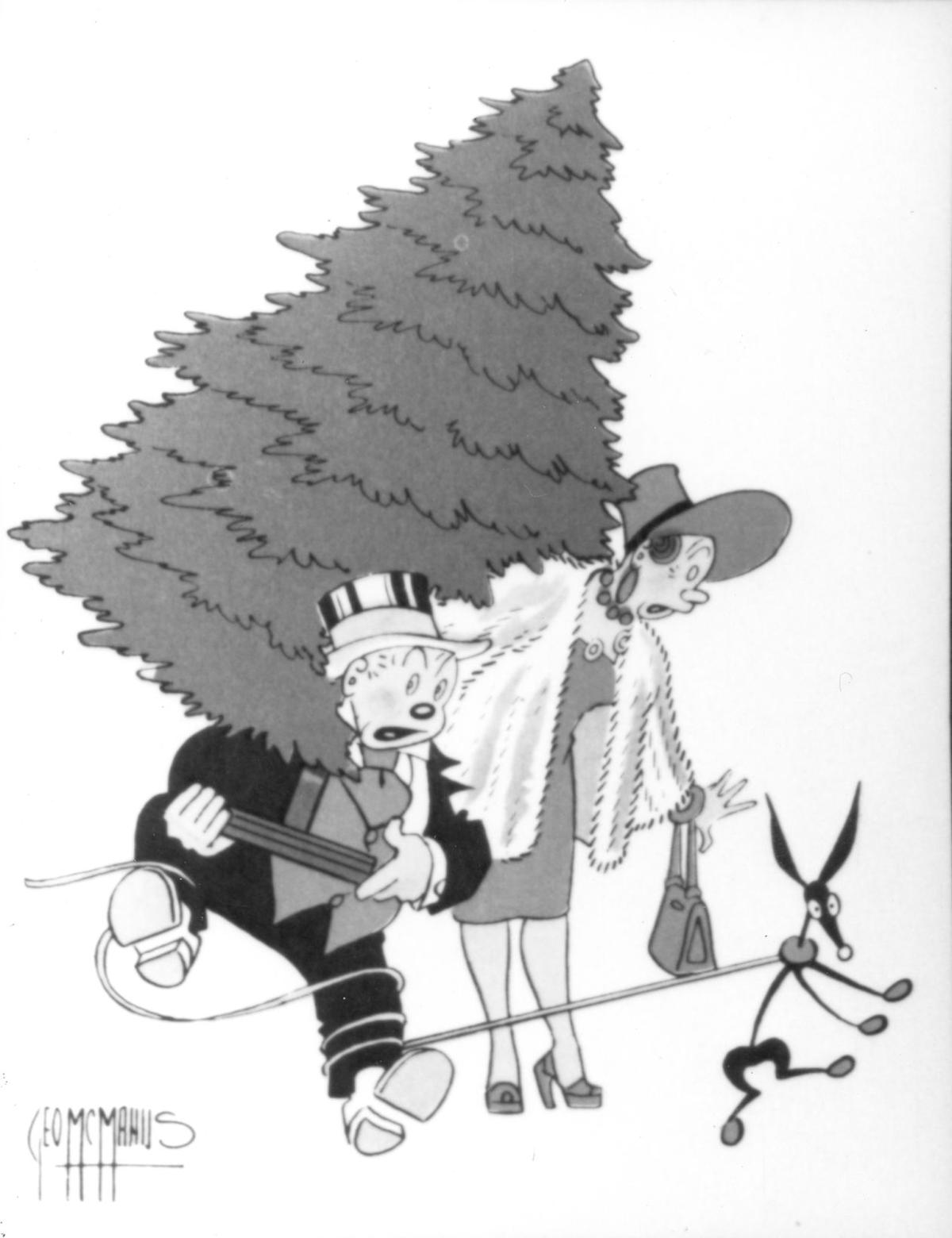 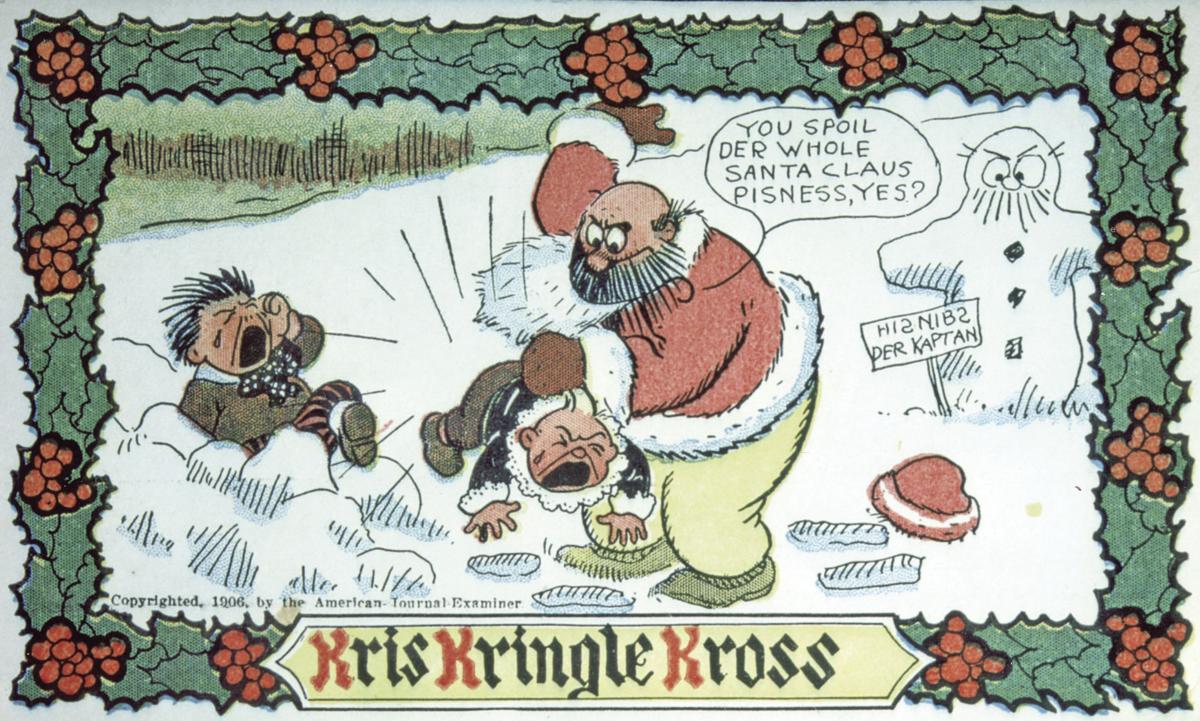 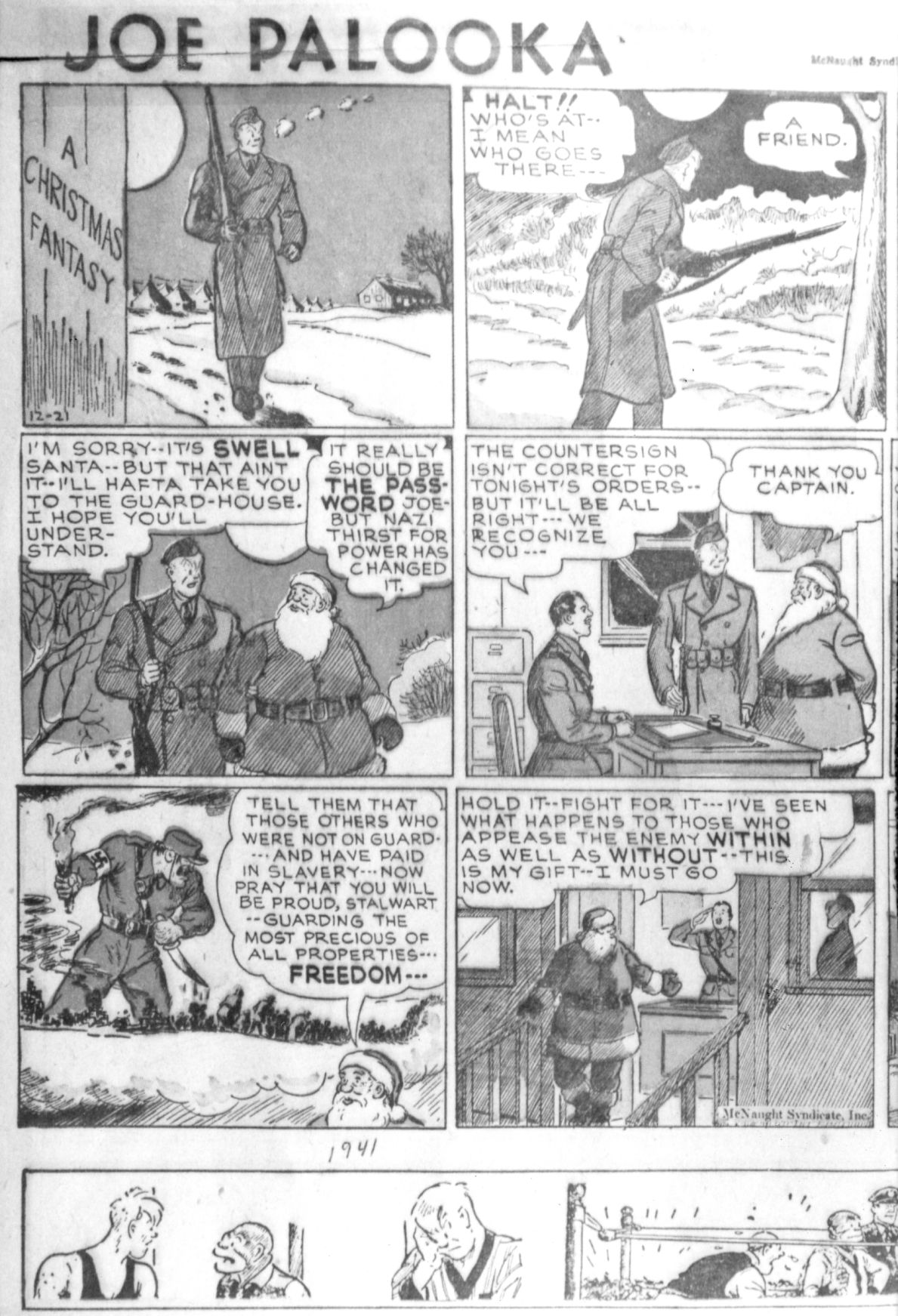 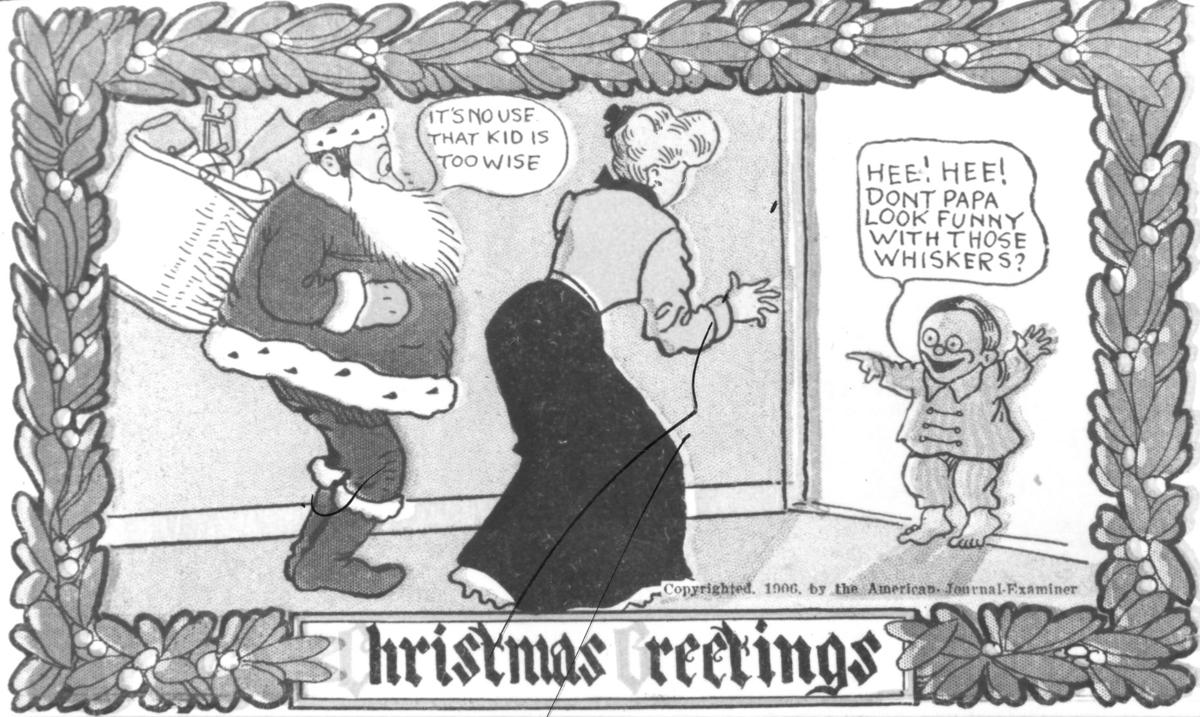 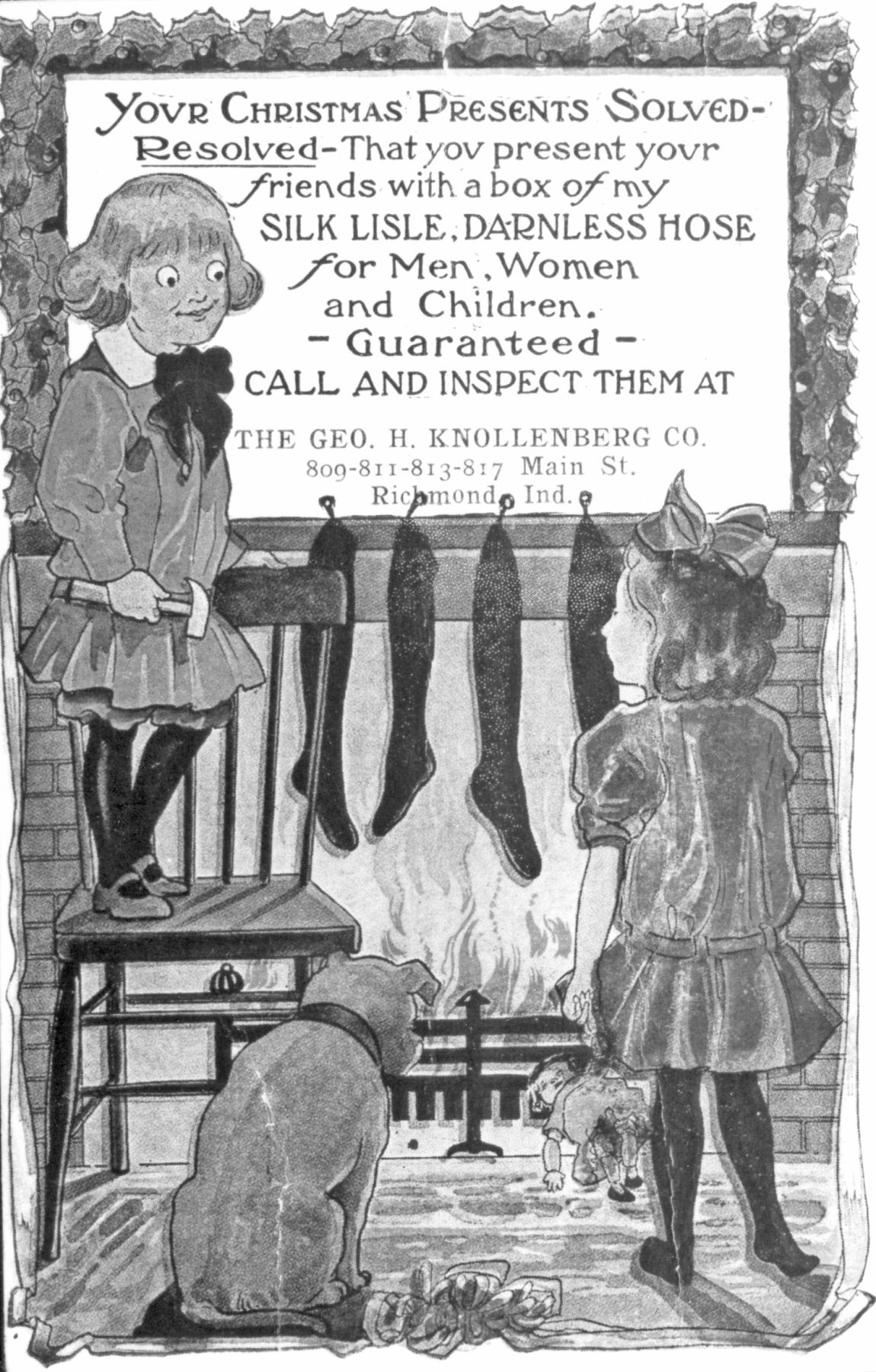 Advertising postcard (1911) showing Buster Brown as the spokesman for his namesake hosiery. Card is found with many different overprints of local merchants. 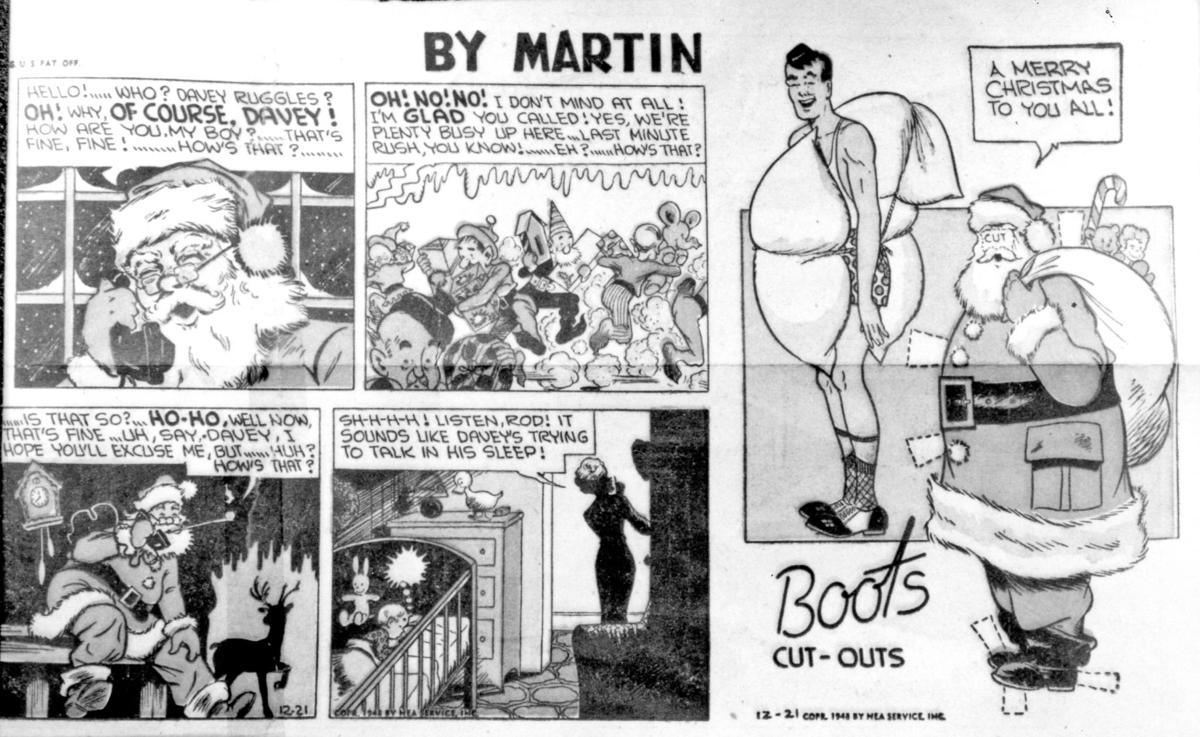 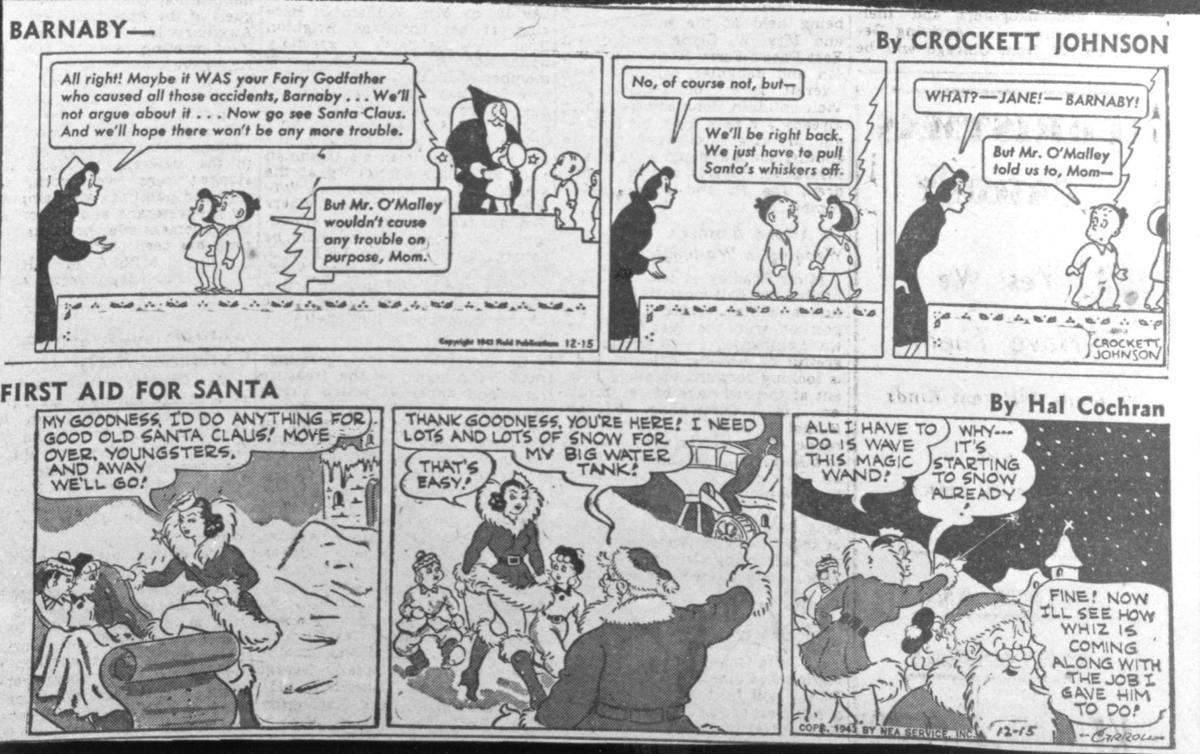 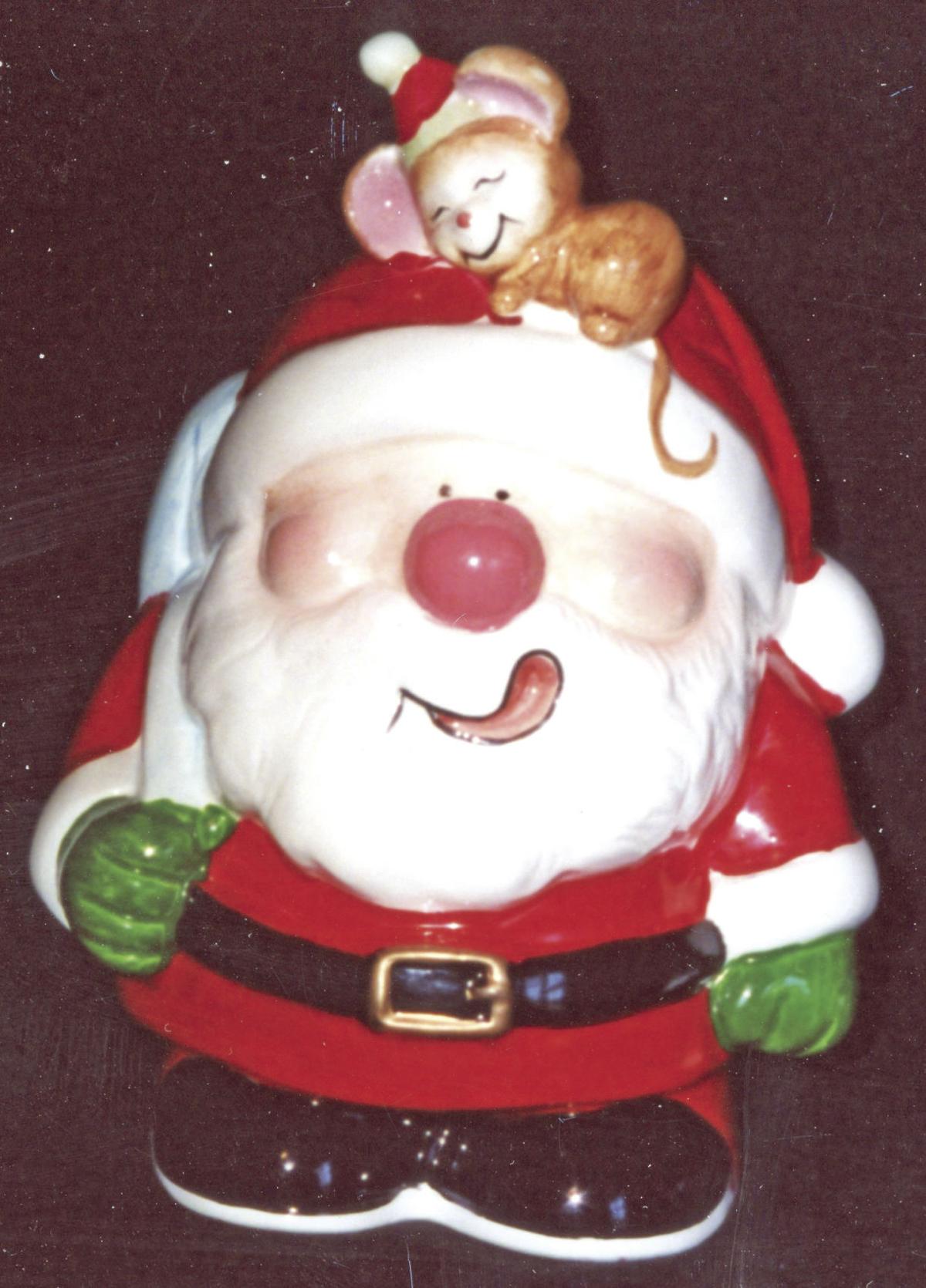 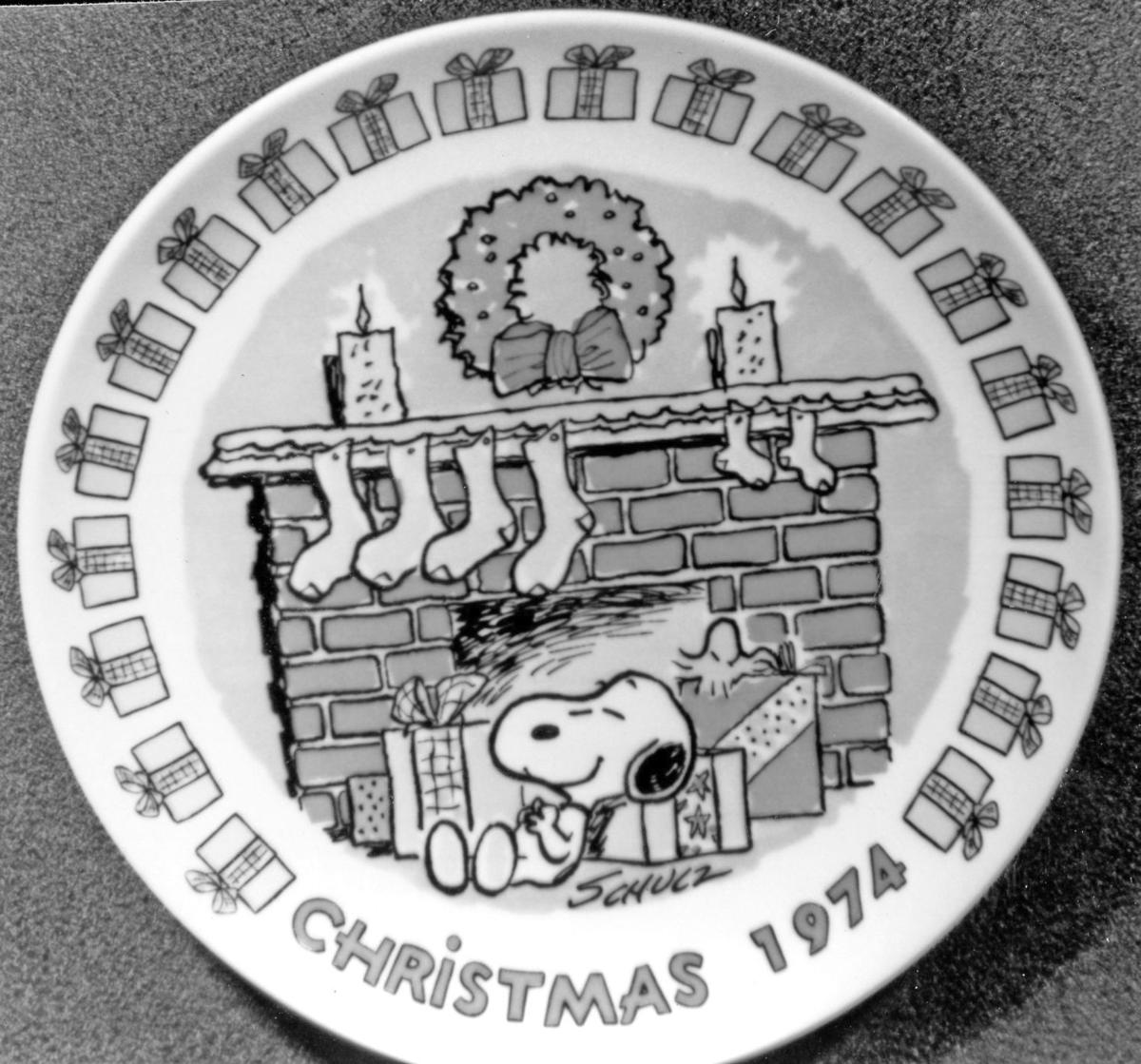 Christmas postcard (1906) of “Buster Brown” with Mary Jane and Tige. This was part of a cut-out premium sheet in the Sunday color supplement of the American Journal Examiner and other Hearst newspapers.

Advertising postcard (1911) showing Buster Brown as the spokesman for his namesake hosiery. Card is found with many different overprints of local merchants.

Christmas has always been a special time in the comic strips. For most of them, that is. "Buck Rogers" and "Flash Gordon" never celebrated the season in their futuristic centuries, no did some of the other adventure strips. But nearly everyone else did, including all the family and humorous story lines.

The Yuletide was an especially important event in the lives of all our beloved characters, such as "Foxy Grandpa," "Tillie the Toiler,” or Boots, and many others.  Even a few experimental mini-series type of seasonal comic strips, notably Hal Cochran's "First Aid for Santa" in 1943 - were tried, but met with little success.

Newspaper comic strips (Sunday funnies and the daily pages) have been with us for a very long time -- well over a century. A uniquely American art form, they began in the twilight of the Victorian age. Since then comic strips have been companions to Americans throughout the tumultuous years of the 20th century and up to the present. They reflect our nation's culture and thought. For instance, the debut in 1912 of "Polly and Her Pals," an independent-minded woman in the work world of men, was a consequence of the Suffrage movement, a major happening of the era.

Often, the comic strip was responsible for initiating new ideas and changes in old ones. Even our proprieties and social conventions have been remarkably affected. Comic art has inspired books, songs, movies, radio and television programs and the theater, forever influencing all forms of entertainment.

But most of all, they tickled our funny bones and made us laugh. We happily followed the adventures of the Bumsteads and waited to see what new trouble Mutt and Jeff or Little Orphan Annie would get into. Often, we saw a bit of ourselves or our own lives in them and their troubles - and we took joy and comfort in the inevitable happy endings.

Our comic strip favorites, like us, also celebrated the holidays. Christmas, not so surprising, was the top favorite with cartoon people, as it was with most people.

From the very beginning, from the start of the last century, cartoonists considered Christmas as a special time for special treatment. Normally, though, not too much changed for the characters. Happy Hooligan still got thrashed about by both life and the cop on the beat, and Garfield the Cat was still disrespectful of his master and sarcastic of his fellow animals. Mutt continued pulling the wool over poor Jeff's eyes, and Uncle Walt and his clan kept on growing older.

Frequently, the story lines revolved around visits from real and impersonated Santa Clauses, attempts at convincing some unwilling individual to put on a beard and red suit, or episodes about gift giving that ended with an O. Henry twist.

During World War II, when many Sunday and daily comic strip heroes put on uniforms to help fight the enemies of democracy - some of them, like Joe Palooka, in the front lines -and their lady friends toiled on the homefront awaiting their return, the quiet, magical time of Christmas became even more sad and sentimental.

Except for a rare topical treatment at Halloween in those strips populated by one or several mischievous urchins, Christmas was the only holiday celebrated with any sort of consistency. In the funny world of comic strips, just as it was in the real world, Christmas always remained a very special day. Modern funnies continue the tradition, particularly the "Peanuts" gang. Old St. Nick, though, seems to be absent a lot of the time.

Besides having Yuletide story lines as a background for their frolics, adventures, and blunders, comic strip folks also leaped out of their narrow world and into a cornucopia of souvenirs, books, toys, paper novelties and greeting cards. Many times, especially with holiday greeting cards, Christmas was often the theme.

Comic strip heroes and heroines, as well as their counterparts in the comic books which came along in the late 1930s, have long enjoyed the Christmas season as much as we real folks.  And to collect memories of their Christmases past in cartoon land adds just another dimension to our holiday collections. So from all the guys and gals in the funny papers, "A Merry Christmas to Everyone."