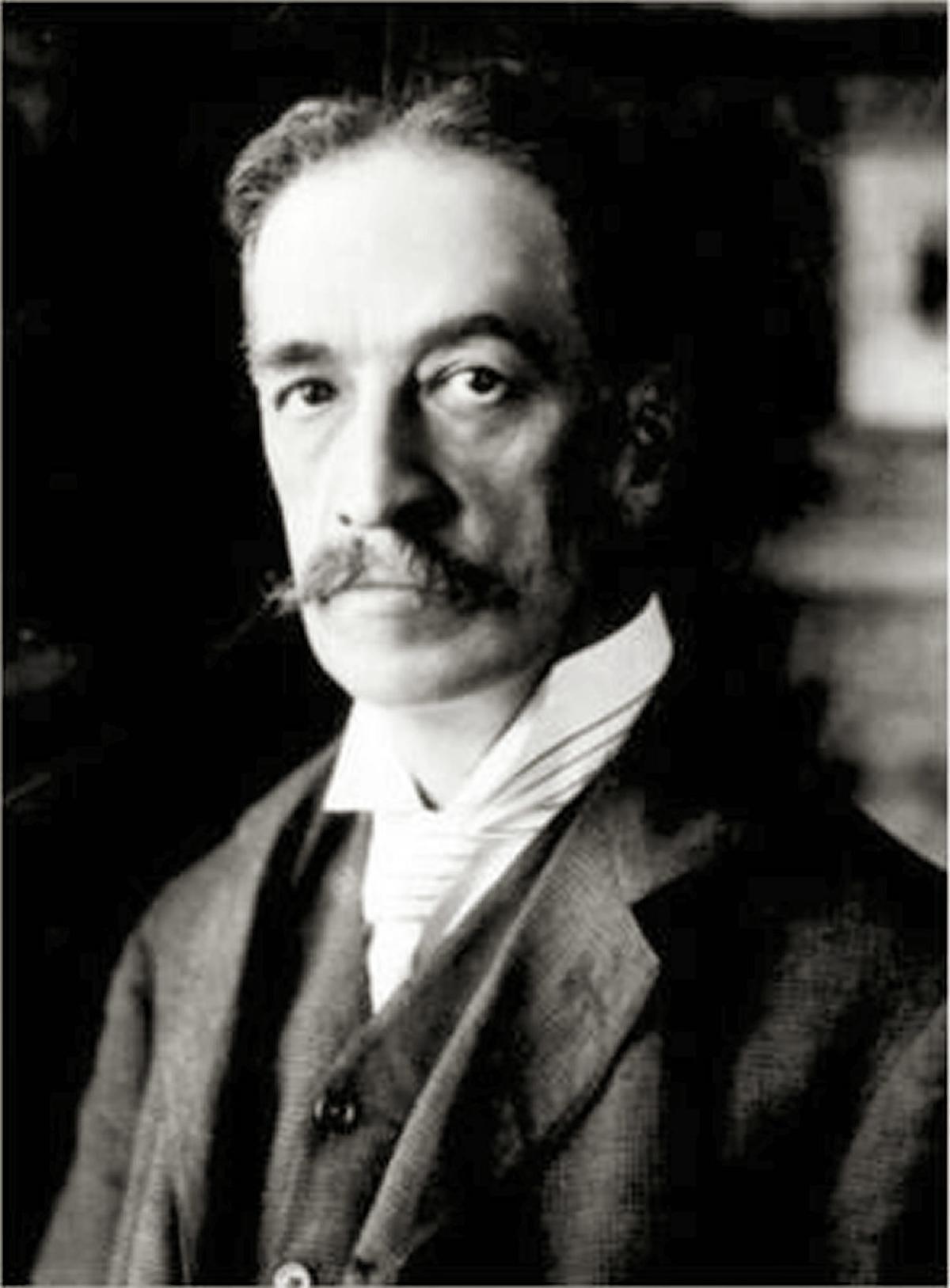 Louis William Wain was born on August 5, 1860, in Clerkenwell, London 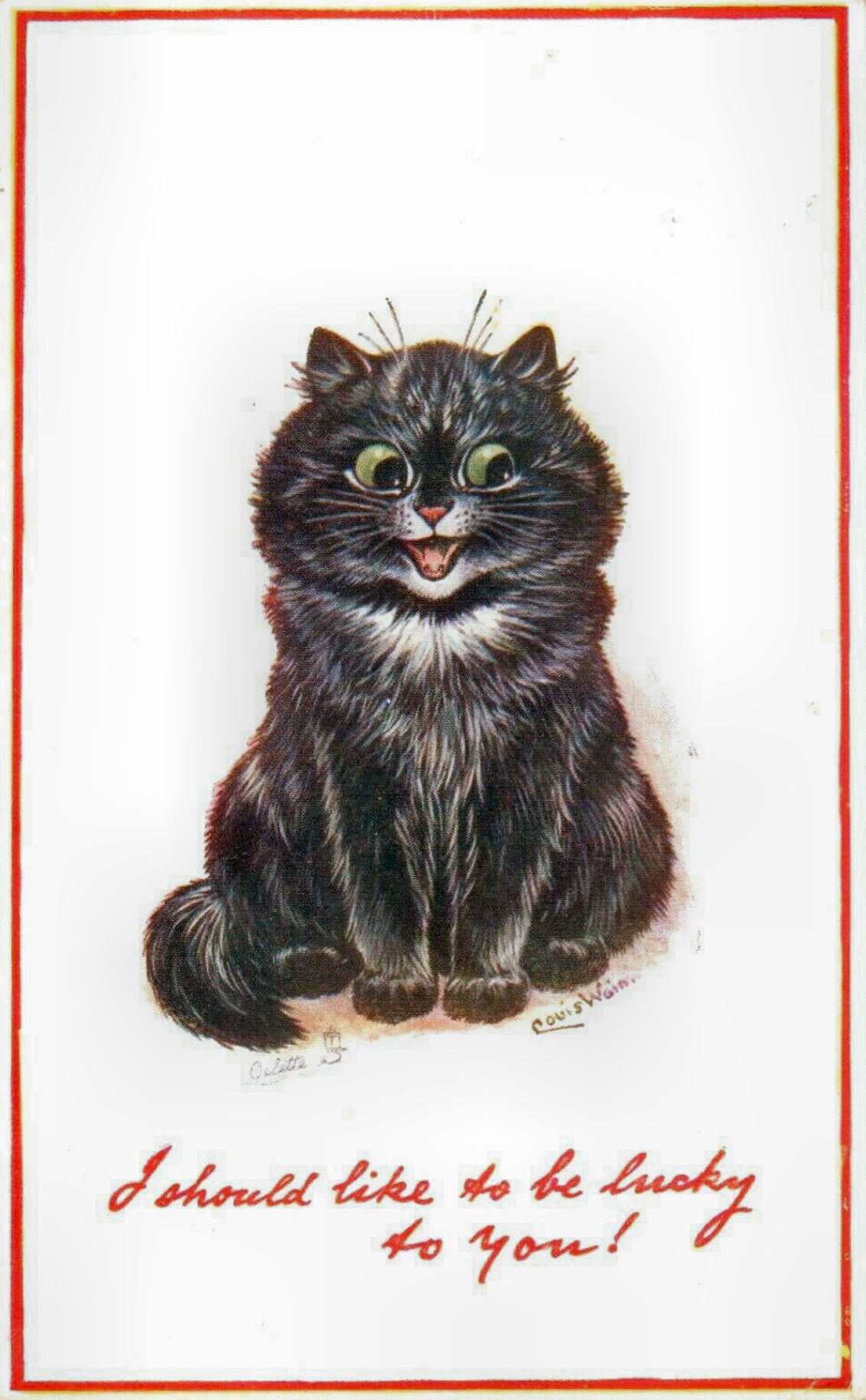 An early Wain postcard which apparently had their cat, Peter, as its inspiration. 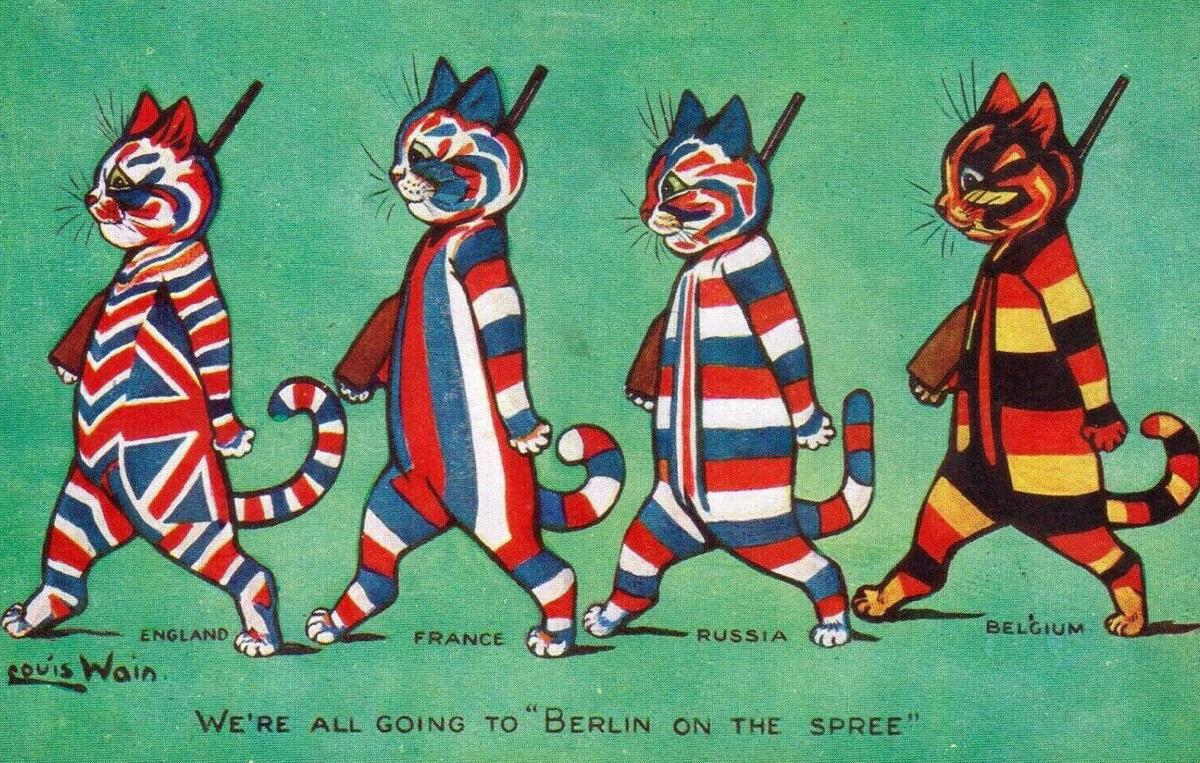 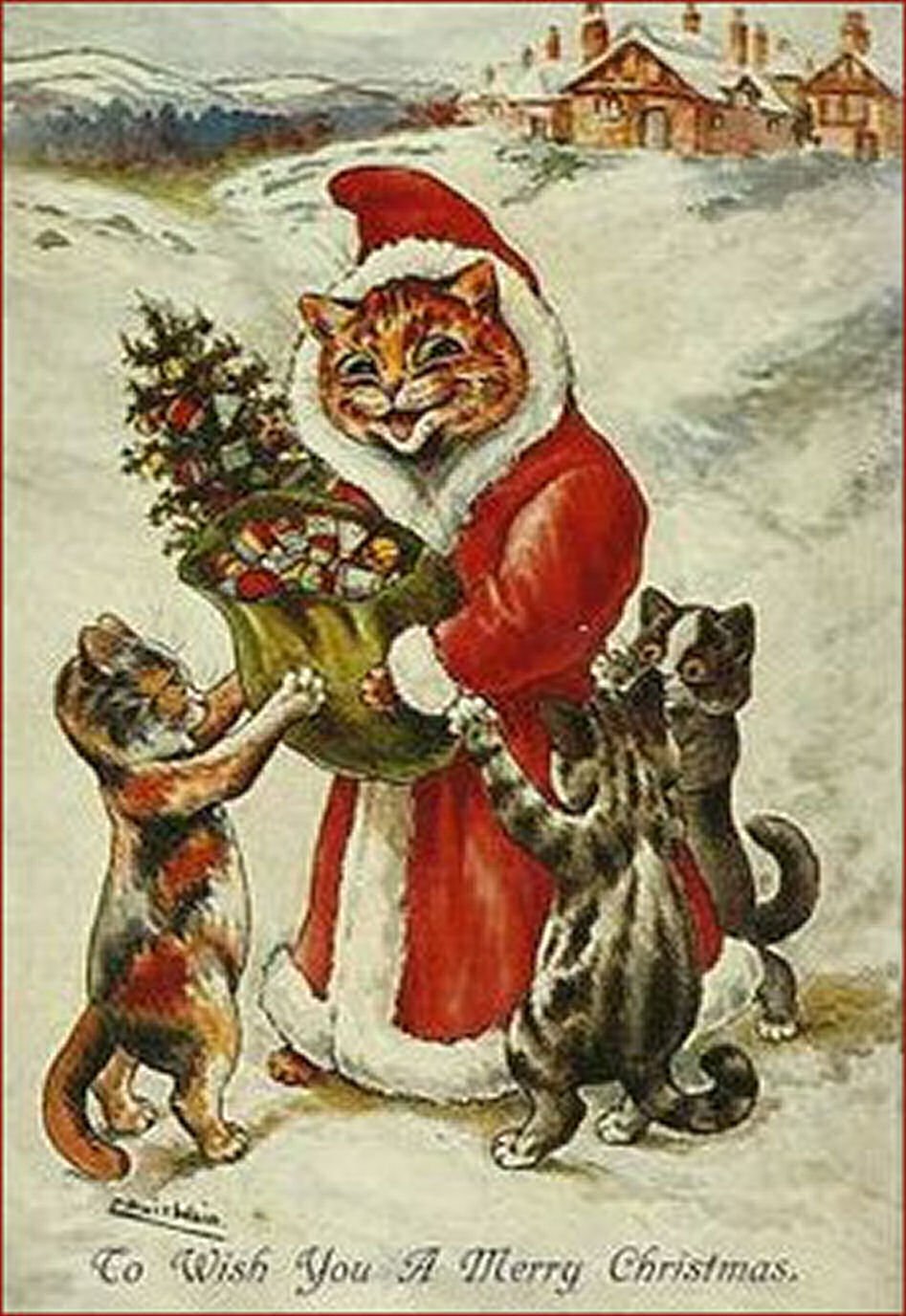 Wain’s most popular postcards were the ones of his cats dressed as Santa. 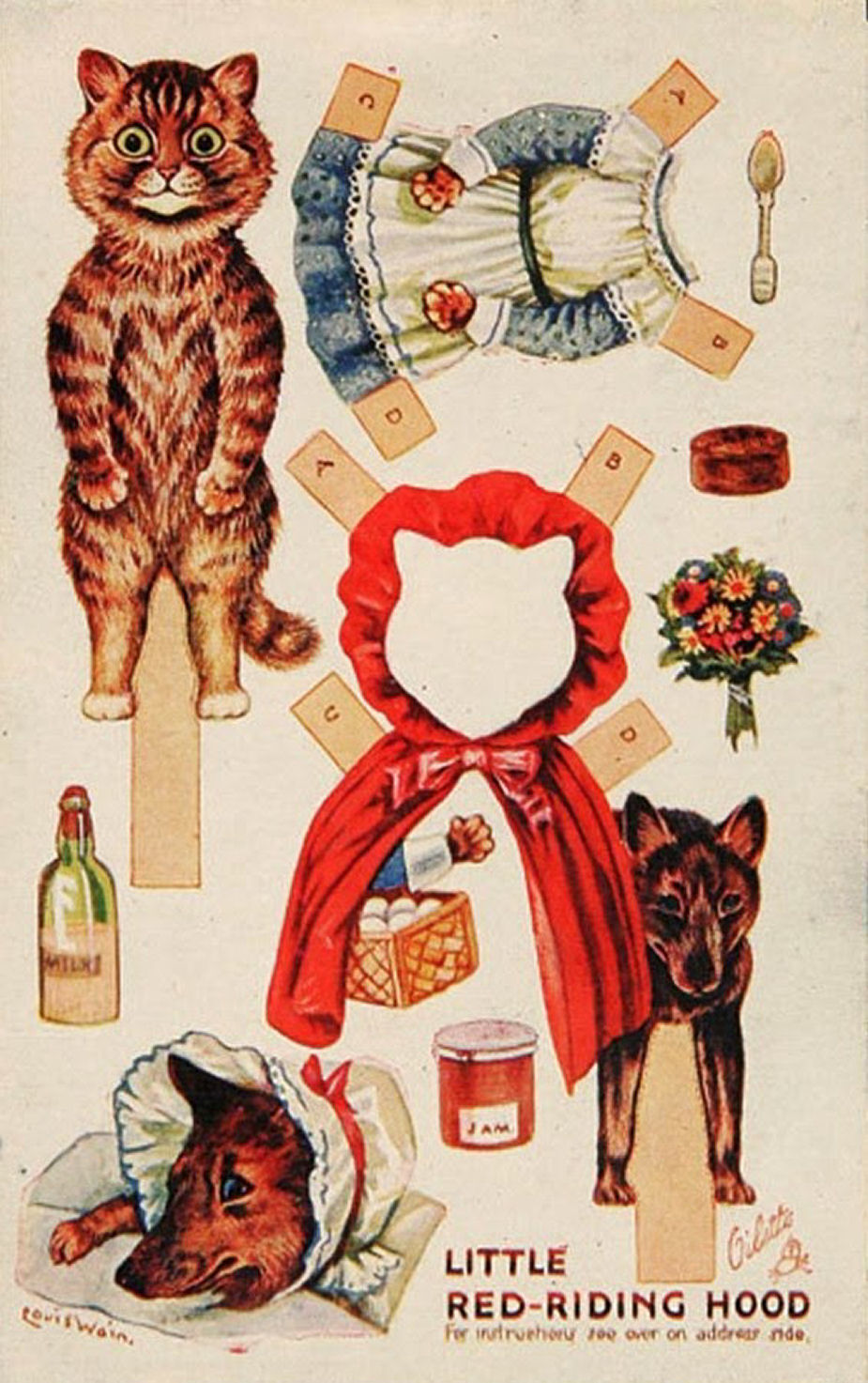 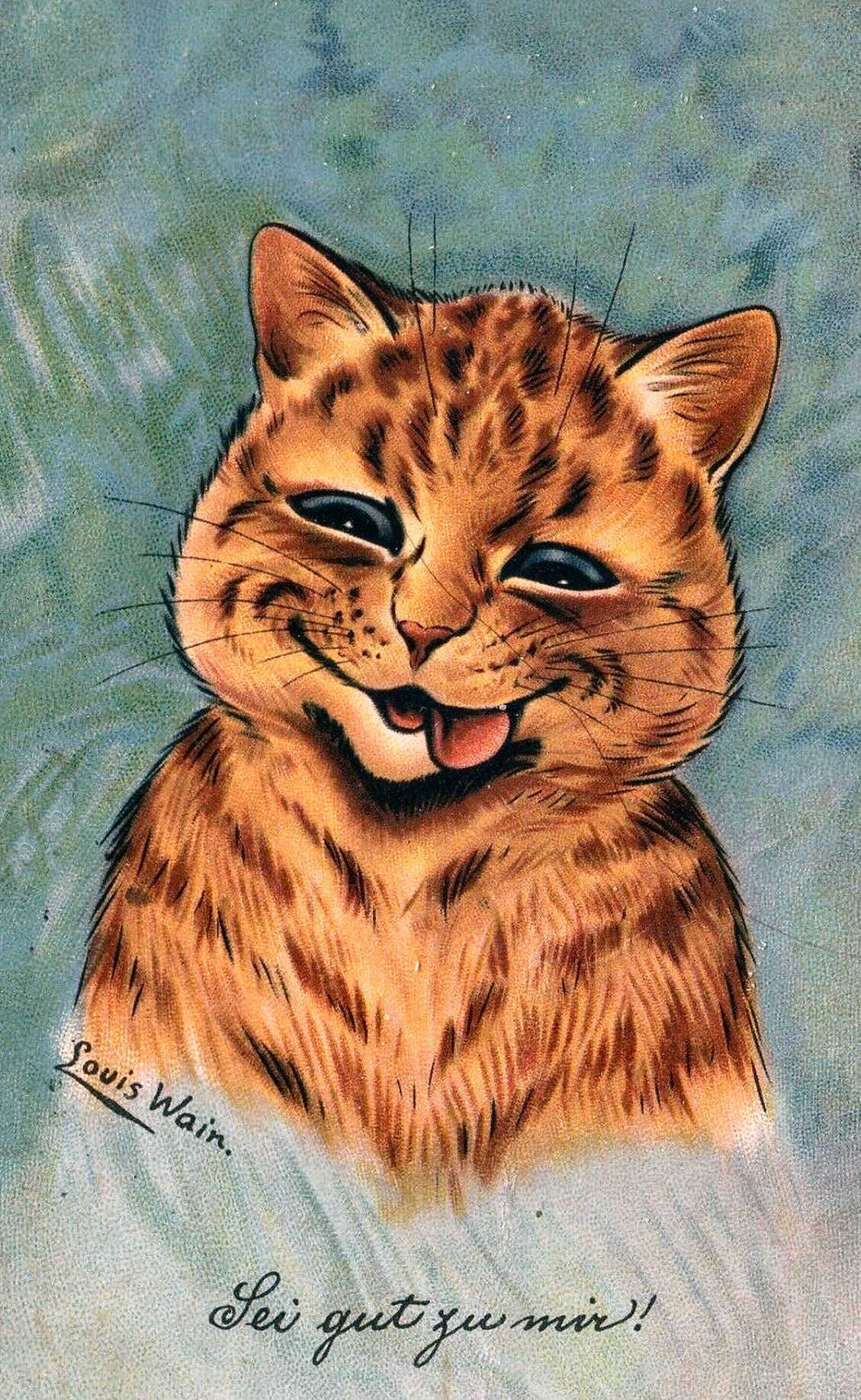 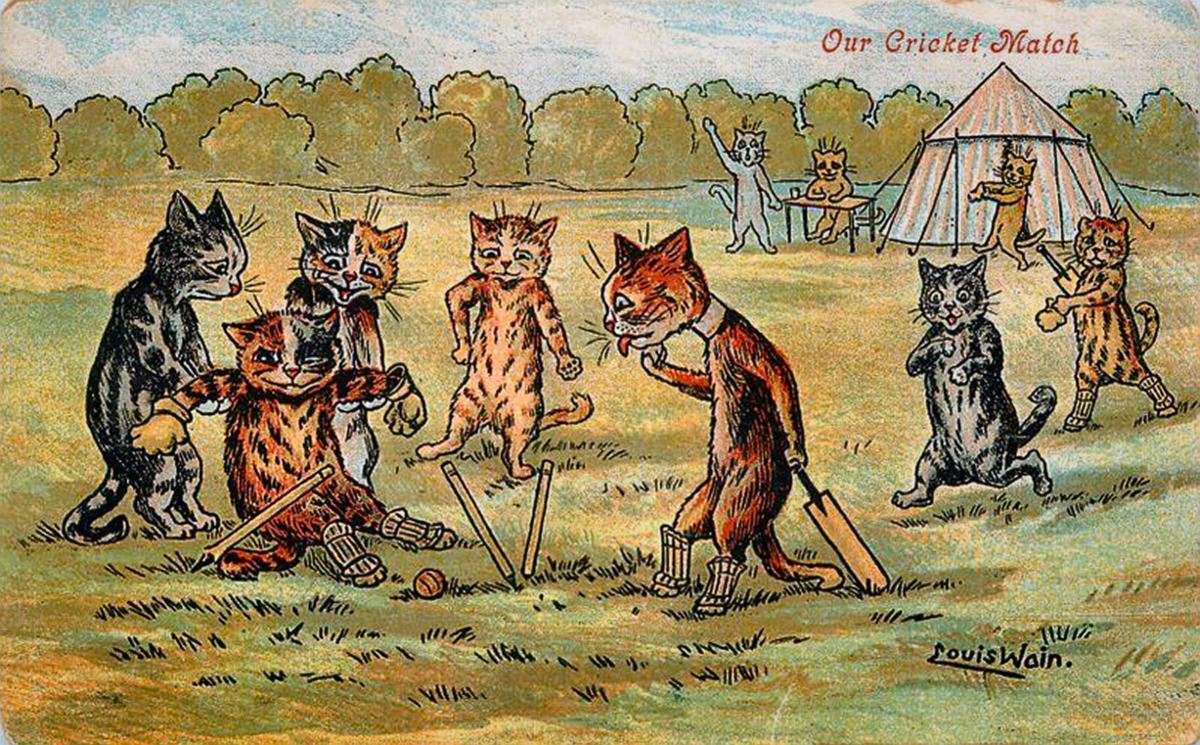 In This later postcard designs, Wain’s cats stood erect in their pursuit of various human activities. 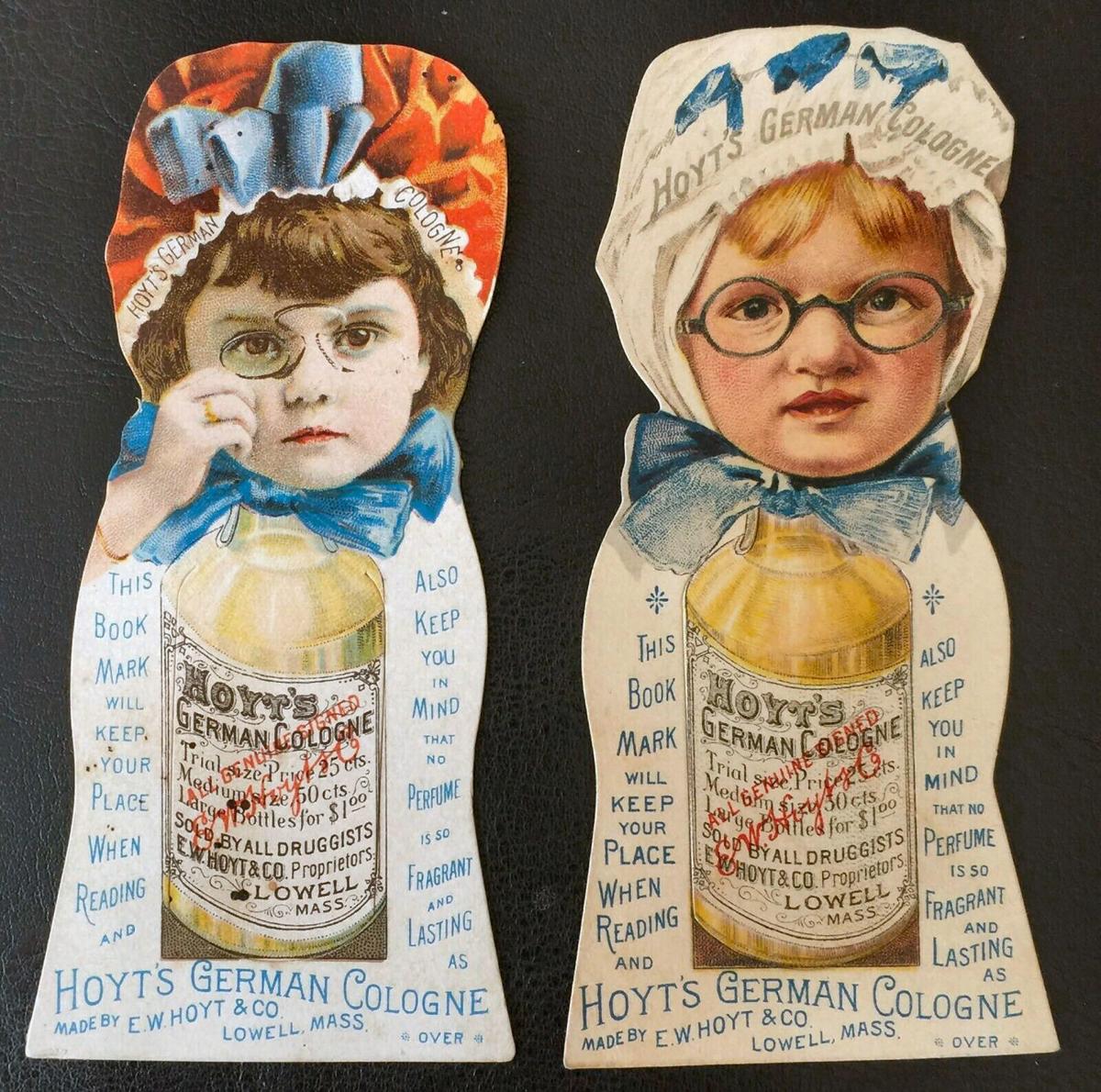 Louis William Wain was born on August 5, 1860, in Clerkenwell, London

An early Wain postcard which apparently had their cat, Peter, as its inspiration.

Wain’s most popular postcards were the ones of his cats dressed as Santa.

In This later postcard designs, Wain’s cats stood erect in their pursuit of various human activities.

Many artists have produced postcards featuring anthropomorphic animals such as dogs, pigs, birds and even horses. However, one man stands out above all the rest as to the popularity of his cat postcards, and that man is Louis Wain.

Louis William Wain was born on August 5, 1860, in Clerkenwell, London (Figure #1). Louis was the oldest of six children and the only male. As a child, Wain was quiet and shy. He did poorly in school and often cut his classes to instead wonder the streets of London observing the world around him. In his teens, Wain demonstrated considerable talent as an artist and was accepted into the West London School of Art. His aim was to become a commercial illustrator. His studies were cut short however, when in 1880, his father died leaving Louis as the sole support for his mother and his five sisters.

Wain continued to live with his family until 1884, when at the age of twenty-four, he married his youngest sister’s nanny, Emily Marie Richardson, who was ten years his senior. The couple moved to their new London residence where on one dark and stormy night, a starved and soaked black and white stray kitten presented himself at their front door. Emily was immediately charmed by the unexpected visitor to whom she gave the name, Peter. Later, Louis would say of Peter, “To him properly belongs the foundation of my career.”

Less than a year into their marriage, Emily became quite ill. Eventually, she was diagnosed with breast cancer. To ease her suffering, Wain began to gift his wife with sketches of Peter. To his great delight, Emily loved the drawings which seem to buoy her mood. Figure #2 shows an early Wain postcard which apparently had their cat, Peter, as its inspiration.

Tragically, in 1887, Emily died. Wain was inconsolable and descended into a deep state of depression and anxiety from which he never fully recovered. To ease his grief, Wain threw himself into his work. Over the next two decades, he produced an average of seven hundred drawings a year. Many of these designs were made into postcards.

Wain’s early postcards featured portraits of happy, playful cats and kittens (Figure #3). Over time, his cats evolved, taking on more anthropomorphic characteristics. In his later postcard designs, Wain’s cats stood erect in their pursuit of various human activities (Figure #4) and appeared fully clothed (Figure #5). Wain’s most popular postcards were the ones of his cats dressed as Santa (Figure #6) and his paper doll cut-out cats (Figure #7).

Although Wain was a prolific and extraordinarily successful artist, like many other artists, he was a terrible money manager. His lack of business acumen left him in perpetual financial distress. This coupled with his unrelenting depression over his wife Emily’s death resulted in erratic and at times violent behavior. In 1924, Wain’s sisters had him committed to the pauper’s ward at London’s Springfield Mental Hospital. Wain spent the remaining fifteen years of his life confined to various insane asylums. He died in 1939.

A popular belief held that Wain suffered from schizophrenia although this diagnosis is speculative at best and was never confirmed by any medical authority. A more recent theory is that Wain’s behavior may have been caused by toxoplasmosis, a parasitic disease transferred to humans via cat feces.

Despite all the misfortune that Wain suffered during his lifetime, he managed to bring pleasure to millions of cat lovers and postcard collectors all over the world. For that he will always be remembered as Louis Wain; King of Cats (Figure #8)! Until next time, stay safe and good hunting.